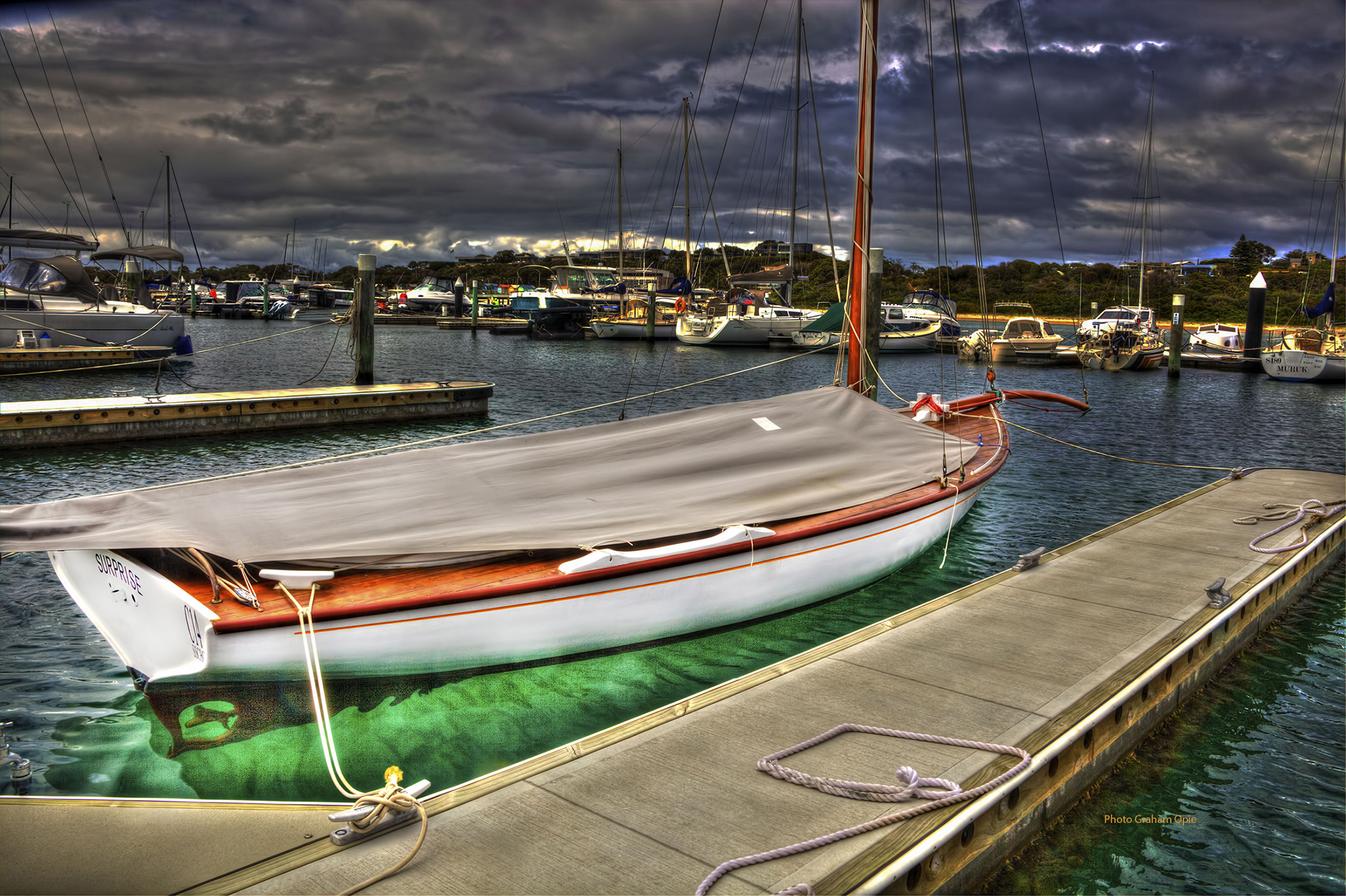 Custodian: Mitch Lacco; 1914 – 1920s
Surprise was built by Mitch Lacco in Rosebud in 1914. Two years later, Mitch and his family returned to Queenscliff from Rosebud and resumed his boatbuilding business there from 1916 until 1928. Folklore has it that Surprise was so named and built to ‘surprise’ the Queenscliff fishermen, which she did.

Surprise joined the commercial fishing fleet in Queenscliff, fishing for barracouta in Port Phillip and outside The Heads into Bass Strait. But after only 18 months, Mitch sold her to help his fledgling business.

Custodian: Joey Wells; 1920s – Late 1920s
Surprise was sold to another local Queenscliff fisherman Joey Wells who named her Doreen, after his daughter.

In the 1920s and onwards, it was a regular occurrence for fishing fleets on Port Phillip and on Western Port to conduct sailing regattas, so as owners could test their skills against their competitors in competing fleets. Queenscliff identity Jack Beazley tells that along with Walter Todd in Wattle, Joey Wells took the challenge very seriously; almost nothing would stand in his way to compete in these regattas. Owners and crew were known to leave Queenscliff on a Friday night, sail overnight to get to the regatta that was scheduled at either San Remo or Cowes, compete in the race on Saturday afternoon and then immediately sail back to Queenscliff. It is on record that Doreen won the Cowes Annual Regatta in 1921.

Custodian: Walter Todd; Late 1920s – 1950
At some time in the late 1920s, Doreen was sold to Walter Todd who purchased her for his son Les as a 21st birthday gift. Les fished out of Queenscliff in Doreen but it is understood that he didn’t do seasonal fishing in Western Port, as did his father in Wattle.

The onset of the World War II brought some changes to the movements of the Todd family. In 1939, Walter moved permanently to San Remo and Les joined the Second Australian Imperial Force. Walter sold Wattle to local San Remo fisherman Len Bagley; Walter then became the custodian of Doreen for the duration of the war years. By this stage, Walter was well into his 70s but he was still fishing, His grandson Jack Beazley tells that if Walter couldn’t find someone to go out with him fishing, he would go out on the ebb tide and come home on the flood tide, under sail. And if he missed the pier he would continue up the channel catching pike.

When Les Todd returned from the war, he resumed fishing on Doreen with Walter. He is also on record as having won the San Remo Yacht Race on Doreen in 1949, a title which, for many years, had been coveted by Walter on Wattle.

The era of a long association by the Todd family with Wattle and Doreen came to an end with Walter’s death in 1950.

Custodian: Unknown; 1950 – Ealry 1980s
Shortly after Walter’s death, Doreen was sold to another local in San Remo; but what became of the boat over the next 30 years is not known.

Custodian: Leigh Morgan; Early 1980s – 1984
Three decades later, in the early 1980s, the boat was identified as an ex-Couta Boat by locals in Williamstown, Port Phillip. She was in a derelict condition sitting on a mooring in the Hobsons Bay anchorage offshore from the Williamstown Sailing Club. A young carpenter Leigh Morgan purchased the vessel and approached Bobbie and Greg Blunt as to the feasibility of restoring the Doreen in Blunt’s boatyard. With their assistance, Leigh carried out the extensive repairs. He also renamed her to her original name, Surprise.

After the restoration, Leigh competitively sailed Surprise in races at both the northern and southern end of Port Phillip.

Williamstown local, Greg Blunt gives an account of the performance of Surprise in the 1982 Portsea Cup at the bottom end of the Port Phillip. Along with Tim Ryan, Greg and his brother were two of the crew. They trained at the top end of the bay around Williamstown for some weeks before the event and, although the boat was prone to leak, it did not deter their plans. They sailed Surprise down to Portsea and towed a dinghy carrying the bags of sawdust, to help to prevent the leakage. A mishap at sea almost brought their quest to an end; the boom broke and, as the boat did not have a motor, they were completely dependent on the old sails to drive them. So the mainsail was set up loose-footed to avoid any tacking.

The crew arrived in Portsea with a few days to spare, to familiarize themselves with the local waters. On arrival, Will Baillieu made available another boom, which was purchased by Leigh at the cost of 20 dollars. The new boom and a brand new set of sails were fitted.

However, Leigh and his crew soon realized they were up against some expert sailors. But on the morning of the race they were able to import a highly skilled local yachtie by the name of Warren Ladd to take the helm. So that he would not be recognized before the race, Warren gave the crew strict instructions to pick him up from Portsea Pier within a few minutes before the start signal. To avoid recognition he hid his face under a broad-rim straw hat. He had also purchased a packet of cigarettes to help to determine the direction of the very light wind.

As they hovered on the start line, Warren kept his head low, but once the start gun sounded, he promptly stood up and declared himself to the rest of the fleet. He helmed Surprise superbly around the course, taking a risk by cutting through the shallows to reach the top mark. Surprise came in 3rd over the line but claimed victory in the Handicap result. This crew from the northern end of the bay had won the Portsea Cup. When they returned to Williamstown in the leaky Surprise, they were greeted with jubilation by the locals.

Leigh Morgan was the custodian of Surprise for a few years, during which he sailed her in various regattas including the occasional Couta Boat Club races out of Port Melbourne for the Lagoon and Gellibrand trophies and the Williamstown Cup. However, when he decided to build his own boat, Surprise was sold to Ian Sturzaker in 1984.

Custodian: Ian Sturzaker; 1984 – Unknown
Ian moored Surprise off Portsea and raced her in the evolving Couta Boat fleet. In early 1993, she came off her Portsea mooring and was badly damaged at the start of a severe gale that hit the waters.

Tim Phillips of the Wooden Boat Shop restored the boat, inserting a new keel, ribs, deck, stern and stern post. All that remained were the original planks and stem. Because the planks were damaged at the end, they were cut off, reducing the length of the boat by about 8 to 10 inches. Out of this restoration a new-look Surprise resulted.

Soon after the restoration, Ian relocated Surprise to Sydney where she spent a number of years sailing on Sydney Harbour and Pittwater.

A SCOOP Newsletter (December, 1987) reports an extract from the Log of Surprise, recorded by Ian during her adventures in North Queensland in early 1987:

If ever a boat was designed for an area, the Couta Boat was designed for this area. The original designers and builders, if they had known the weather and the sea conditions here, would have up-stakes and come here with their designs in their heads. The local timber would have suited them and the lines of their boats would have suited here. The hull handles the sea condition, a warm Port Phillip of about 30 mile fetch, with ease. The big open cockpit is ideal for pulling Mackerel and just sitting in watching the islands go by.

After Ian’s death, Surprise was sold to Mick Ahearn in Perth, Western Australia.

Custodian: Mick Ahearn; Unknown – 2002
Surprise was transported across the Nullarbor to her new home at the Royal Freshwater Bay Yacht Club and given a new sail number: RF7. But her time in the west was brief. After a short stint and passing through the hands of a few owners, Surprise was back on Port Phillip.

Custodian: Nick Williams; 2002 – 2010
Local Sorrento sailor Nick Williams purchased Surprise in 2002 and transported her back to Sorrento where she was restored to her original condition.

Nick successfully raced Surprise for a number of seasons and won numerous titles, including the Portsea Cup, the National Championships and many other accolades.

Custodian: The Kamer Family; 2010 – Present
In 2010, Nick sold Surprise to Rob Kamer who bought her as a family boat. Rob’s sons, David and Adrian, heard Surprise might be on the market and convinced Rob’s wife Sandy that it would be fun to all sail a Couta Boat together and as such, have a look at Surprise. Sandy, who declared they were not allowed to buy another boat as they had too many, fell in love with the charming Surprise, the first time she looked at her, suggesting:

I think we should buy her.

The deal was done. Being members of both Sorrento Sailing and Couta Boat Club (SSCBC) and Blairgowrie Yacht Squadron (BYS), Surprise is berthed in the marina at BYS and sailed occasionally out of SSCBC.

Skippered by David, the Kamers, accompanied by David George, started to compete in events at SSCBC including the CBA National Titles, the Portsea Cup and other major events. However, in recent years Rob developed some major health issues that made it difficult for him to compete on a regular basis. Although Surprise is now used mostly for recreational sailing, Rob is itching to get back to competitive sailing.