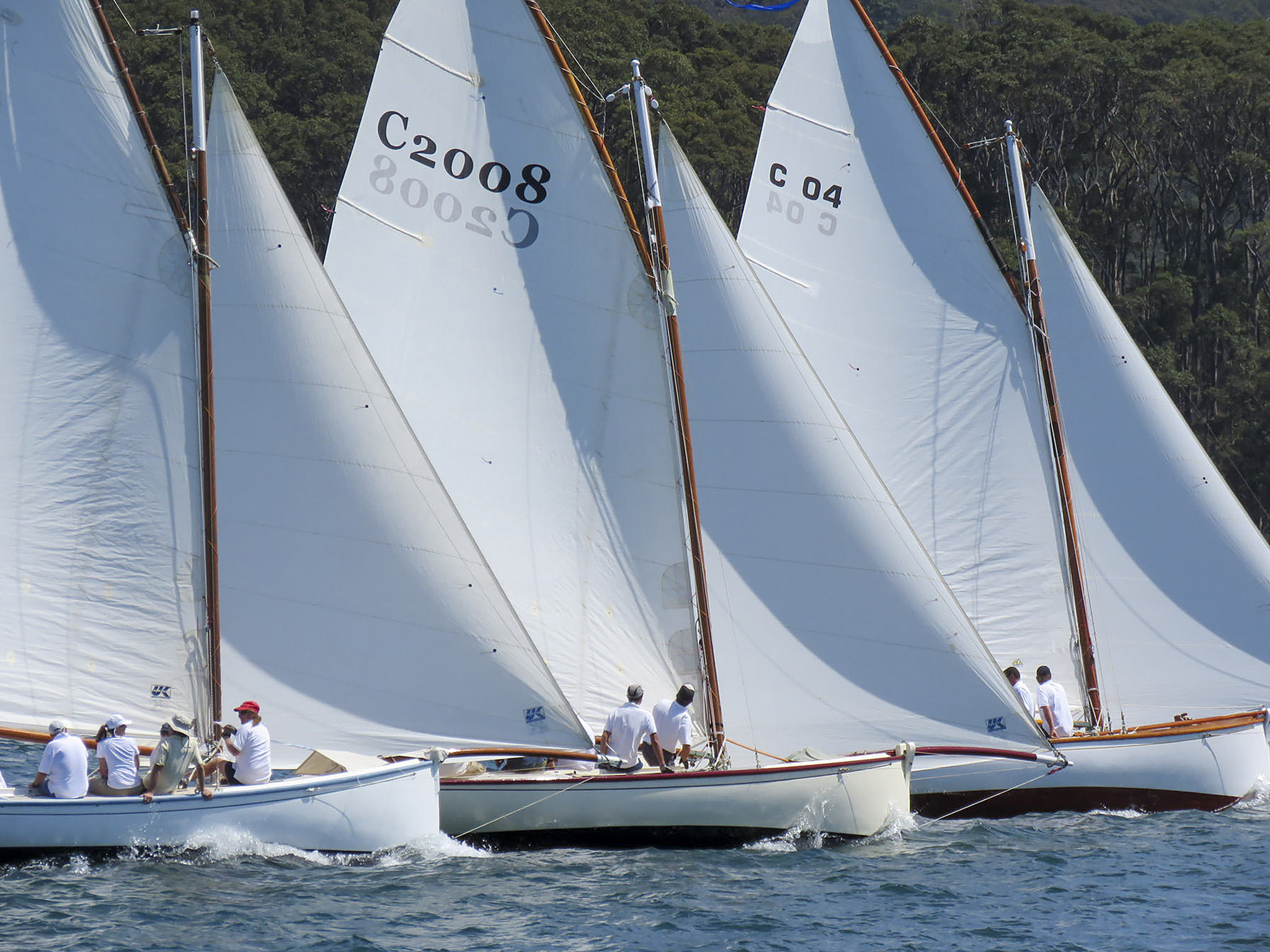 Andrew and David had been to several meetings with Peter Gale who owned Vivienne, now Romy C2003 and built at the WBS some five years earlier in 2003. Peter convinced them that his design was very close to the best one yet.

In 2007, the Couta Boat Association (CBA) made changes to the class rules, in particular, restricting the minimum depth of a Couta Boat’s forefoot. This change impacted unfortunately, on the two new boats then under construction: Southerly at the WBS and Grant Smith’s Nepean at Corsair Boats, Rosebud. In the following year, the CBA removed this restriction of a shallower forefoot dimension which had adversely impacted the potential of these two new boats, but for them from a design perspective, the damage was done. See Appendix: Design.

Southerly was launched in November 2008 and to her owners she was certainly a vision of beauty. They raced her at Sorrento Sailing Couta Boat Club (SSCBC) for three seasons and achieved their goal of sailing at the front end of the fleet but were unable to win neither the CBA Nationals or the Portsea Cup.

One of the syndicate was never particularly happy with the boat; as beautiful as Southerly was, she was not constructed from Huon Pine as specified, and Fred felt a little duped. Further, due to work commitments he didn’t sail so regularly; which left Andrew, David and Harley to do much of the racing. But the mateship among the syndicate remained strong.

There came a time when, in a fit of pique, Andrew told the boys that if they didn’t want to have a boat, he’d sell it, not realising that she’d be snapped up by a Sydneysider in the space of a week. In mid 2011, Terry Moran from Pittwater shook hands and bought the boat. Harley was then happily ‘poached’ by the Kate syndicate (see Kate C305 entry). Andrew Skinner then leased Rip from Christopher Sinn for two years with fellow syndicate members Fred Haig and David Hendy joining Andrew later on. See Rip entry.

Custodian: George Gaal, Ian James and Terry Moran; 2011 – 2017
Terry Moran had retired to live on Scotland Island, located on Pittwater. After sailing in the Pittwater Couta Boat fleet for a few months he travelled to Sorrento to purchase a Couta Boat for the purpose of building the local Pittwater fleet from three active boats.

Terry attributes his purchase of Southerly to Wayne Parr at the WBS who described her as being 2 ½ years old and a very competitive vessel, reaffirming Terry’s view that Southerly’s presence in the fleet would lift the interest and excitement of sailing Couta Boats on Pittwater. Along with Terry, two local Pittwater sailors George Gaal and Ian James each bought a share in Southerly.

From July 2011 to September 2017, the new custodians sailed Southerly out of Royal Prince Alfred Yacht Club (RPAYC), Pittwater where she won and was placed in many races in the series over those years. Also adding to her pedigree, she was successful with wins and placings in the Wattle Cup, Sydney Amateur Sailing Club (SASC), Royal Motor Club, Royal Prince Edward Yacht Club (RPEYC) and other regattas.

In the period of Southerly’s presence on Pittwater, the local fleet grew to 10 Couta Boats, with six to seven boats sailing weekly. And when Jim offered to purchase Southerly, the crew and owners said they probably can’t repeat this period of success again, so they elected to sell.

Happy times were had by George, Ian and Terry and all who sailed on Southerly over this period.

Custodian: Jim Wilshire; 2017 – Present
Southerly’s next owner Jim Wilshire, who at the time was sailing Eclipse, met Southerly on the start line of the 2017 Couta week on Sydney Harbour and over the following week spent most of the racing, swapping crew between the two boats.

For Jim, there was an instant attraction to Southerly. He was impressed with the quality of work by the boatbuilder and all the fine details, but it was not until he sailed Eclipse against the full SSCBC fleet in the Portsea Cup, in light winds, sloppy seas and strong tide, that he realised Eclipse was going as fast as she could.

In his enthusiasm, Jim then discovered that buying a sailing boat is much easier then selling an old one. However, the positive result was to own two boats in different locations: Southerly at RPAYC on Pittwater and SSCBC at Sorrento, and Eclipse at home on the Swan River, Perth.

Southerly spent most of the first year on Terry Moran’s mooring in Pittwater. She sailed in the Sydney RPEYC and SASC regattas, winning the Muriel Cup, then back to SSCBC, Sorrento to compete in a few more regattas.

Over the winter seasons of 2018 and thereafter, Southerly has been ‘Moosified’ by Wayne Johnstone who is affectionately known as Moose and has been looked after and optimised by the WBS in Sorrento.

Jim aims to sail as many events as possible that are scheduled in the west and east. He and his crew now fly over periodically and race Southerly in the significant regattas out of SSCBC, Sorrento as well as competing in various regattas in Sydney.

Our hope is to make the most of the current situation and continue to enjoy the hospitality and to sail as many events as possible, hopefully returning home to Royal Freshwater Bay Yacht Club, Perth. We have been lucky in our last two Portsea Cups, first to the top mark two years running but discovered getting around the windward mark in that tide is another thing all together.

Appendix: Original Design Brief by the Skinner Syndicate
The boat shall be drawn, based upon the 2003 Vivienne plan.

A new drawing will be submitted to the Couta Boat Association for approval with the following changes;
* The plan will be drawn to comply with all of the rules of the Couta Boat Association, in particular rule 2.5 ‘The Couta Boat is a non-development class.’
* The forefoot will be deepened 2.5’ to comply with rule 7.14
* Rule 7.13 will be adhered to, the boat shall have the minimum beam buttock angle.
* The beam shall be moderate, same as Vivienne plan 10’2’