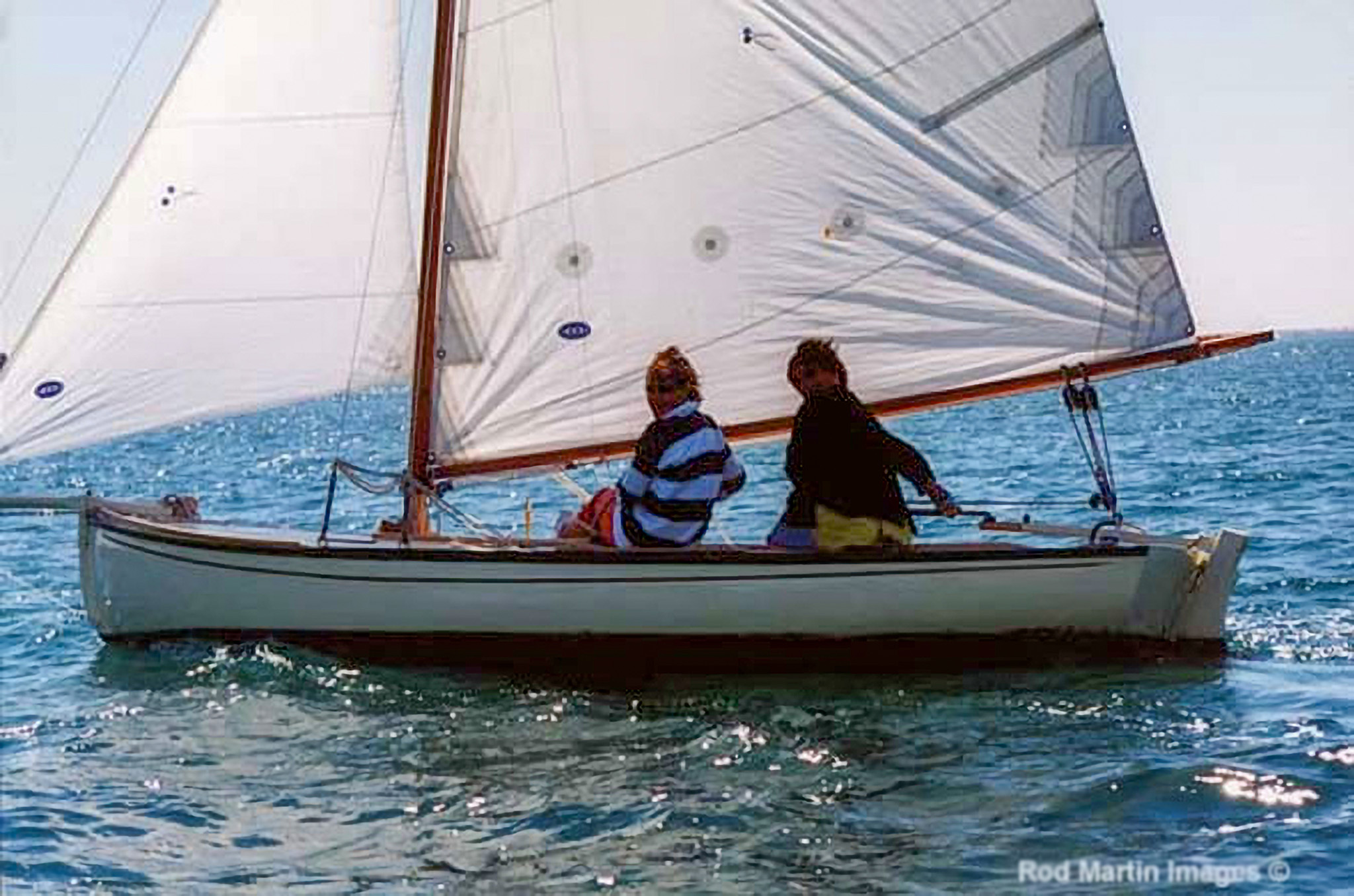 Early Years
Seagull was built, circa 1925, by Ernie Digby at Williamstown, using timbers from the deckhouse of a windjammer that was being broken up in Port Melbourne, and thus bears an added unique historical aspect. The planking is Teak on Celery Top Pine.

Seagull is a significant early Couta Boat, as her apple-bowed design became the prototype for the design of the Jubilee ‘one design class’ yacht designed in 1935, the jubilee year of the reign of the late King George V. Charlie Peel, the designer of the Jubilee yacht class is known to have gone to Williamstown to check out the design of Seagull.

Custodian: Unknown; c1925 – 1970s
There is no record of her working history from the period in which she was built until the early 1970s. However, Dugga Beazley a professional fisherman from Port Melbourne, used to sight her moored at the Williamstown wharf. It is believed that she was used as a working fishing vessel out of Williamstown.

Custodian: Dugga Beazley; 1974 – 1975
In 1974 when Dugga was walking down the pier in the boatyard of C Blunt Boatbuilder in Williamstown, he came across Seagull in need of repair, with a small ‘For Sale’ sign on her. Dugga bought her for $200 and took her home to his backyard in Port Melbourne. He removed the small Stuart Turner engine from her and sold it for $200, so recouped his initial expenditure. He also renamed her Melissa after his newborn daughter.

Custodian: Denis Wilkins; 1975 – Unknown
Melissa sat in Dugga’s backyard until the following year, 1975 when Denis Wilkins, a local St Kilda restaurateur who bought fish from Dugga, purchased her. She was then removed to a Nissan Hut at Fisherman’s Bend where she underwent further repairs.

At the same time, Dugga was repairing his 27’ double ender Couta Boat Volunteer which he used for fishing. Upon sighting Volunteer, Denis challenged Dugga to an on-water duel with the 18 foot Melissa.

Put your money where your mouth is, dared Denis to Dugga.

So Dugga equipped Volunteer with a centre-plate, bigger mast and bigger sails. But in her first race out of Port Melbourne the much smaller Melissa soundly beat Volunteer.

Melissa was penned at St Kilda Marina. Then for the summer season she was taken down to the southern end of Port Phillip where she competed in races organised by the Couta Boat Club that sailed off Portsea and Sorrento. Denis recalls one race when Melissa was off Point King, her mast halfway above the deck snapped after an unintended Chinese gybe, with quite horrendous consequences and an embarrassing tow home to the mooring.

Denis regarded Melissa to be an exceptional sail boat; her looks belied her seaworthiness and sailing capacity. This was never more obvious than during one infamous sail from Portsea to St Kilda with his cousin Will Baillieu as crew. They left Portsea mid-morning and reefed down to brace themselves for a stiff westerly that was at times pushing 30 knots.

The bay was a sea of white caps, all standing up against the start of an outgoing tide. It was rough, wet and dangerous for such a small boat; I had brought basic provisions; Will had the sense to bring the rum. Centre-plate almost up, we surfed and bailed over the shallows of Mud Island. Then with deep water on the other side, the rum became our courage for the remaining trip. Two things I remember vividly of that sail: how well Melissa handled those short seas and Will’s pledge never to sail with me again!

Melissa gave Denis and his family great joy as their first family sailing boat. He sold her to buy a larger Couta Boat. Barry Dawes became the next custodian.

In the nine years in which Sally owned Eleanor, the boat was moored off Camerons Bight, Blairgowrie and then penned at Blairgowrie Yacht Squadron (BYS).

When Eleanor was first moored at Camerons Bight, Sally had her own initiation to the challenges of owning a boat. Once when she was motoring to the mooring, Eleanor’s mainsheet somehow became tangled around the prop, stalling the boat. Fortuitously, Couta Boat builder Tim Phillips and his two young sons happened to motor by and saw the predicament. In a flash, young Sam and Will instructed by a nod from Tim, dived in and used a sharp knife to release the sheet. Effortlessly!

Eleanor was sailed regularly in the Division 2 fleet out of the Sorrento Sailing Couta Boat Club and although Sally sometimes found it a difficult task to field a crew, she always enjoyed the challenge of racing.

She recalls one particular day when she sailed solo from Blairgowrie in a light breeze to join the tail end of a race, she did not notice the dark clouds rolling in from the west. As the winds strengthened and tested Sally’s nerve, Wayne Parr came alongside and jumped aboard to help steer Eleanor safely around the course. Sally experienced firsthand the camaraderie of fellow Couta Boat enthusiasts.

As is the plight of some boats, Eleanor, on her mooring and with a failed bilge pump, sank to the bottom of Port Phillip in a severe storm. But almost as quickly as she sank, she was afloat again, by courtesy of the Wooden Boat Shop, Sorrento.

In the period of Sally’s custodianship, Eleanor underwent an extensive restoration.

Custodian: Nick Creech; 2006 – 2013
Eleanor was then sold to Sydneysider Nick Creech in 2006. She was transported to Church Point on Pittwater, NSW and moored just off his house. Nick sailed Eleanor on Pittwater. He re-rigged her quite extensively so he could sail her single-handed, with quite a few distinctive systems to make it easier to raise the sails and manipulate the sheets.

Custodian: Grant Williams; 2013 – Present
In January 2013, Grant Williams purchased Eleanor from Nick and immediately sailed her from Pittwater down the coast to Sydney Harbour. This inaugural journey was in a 35 + knot north-easterly, with a novice sailor and well-known Australian writer Peter Cochrane, winner of the inaugural Prime Minister’s Prize for Australian History in 2007, onboard. Grant alleges:

It was, let’s say, a stimulating introduction to open water sailing for Peter, as we made the trip in just over an hour under full sail!

Seagull was moored in the mouth of the Lane Cove River at Woolwich, Sydney where Grant grew up and still retains a mooring. Having sailed all his life on Sydney Harbour, he was a seasoned yachtie and so respected the tradition of preserving a boat’s original name. He renamed Eleanor to her original name, Seagull.

Grant sailed Seagull single-handed on Sydney Harbour up until the end of 2017 when the family moved to Melbourne. Seagull was transported by road from Woolwich Dock to the Wooden Boat Shop (WBS) at Sorrento where she was fully restored and repainted, fitted with a new motor, Yanmar 1GM10 and gearbox, a fuel tank, and given a full electrical recondition.

Grant has stripped out all of Nick’s interesting running rigging and returned Seagull to her traditional rig. She is now in 2021, sitting on the hard stand at the WBS awaiting rerigging. Rerigging will all be in line with her original rigging using sympathetic equipment.