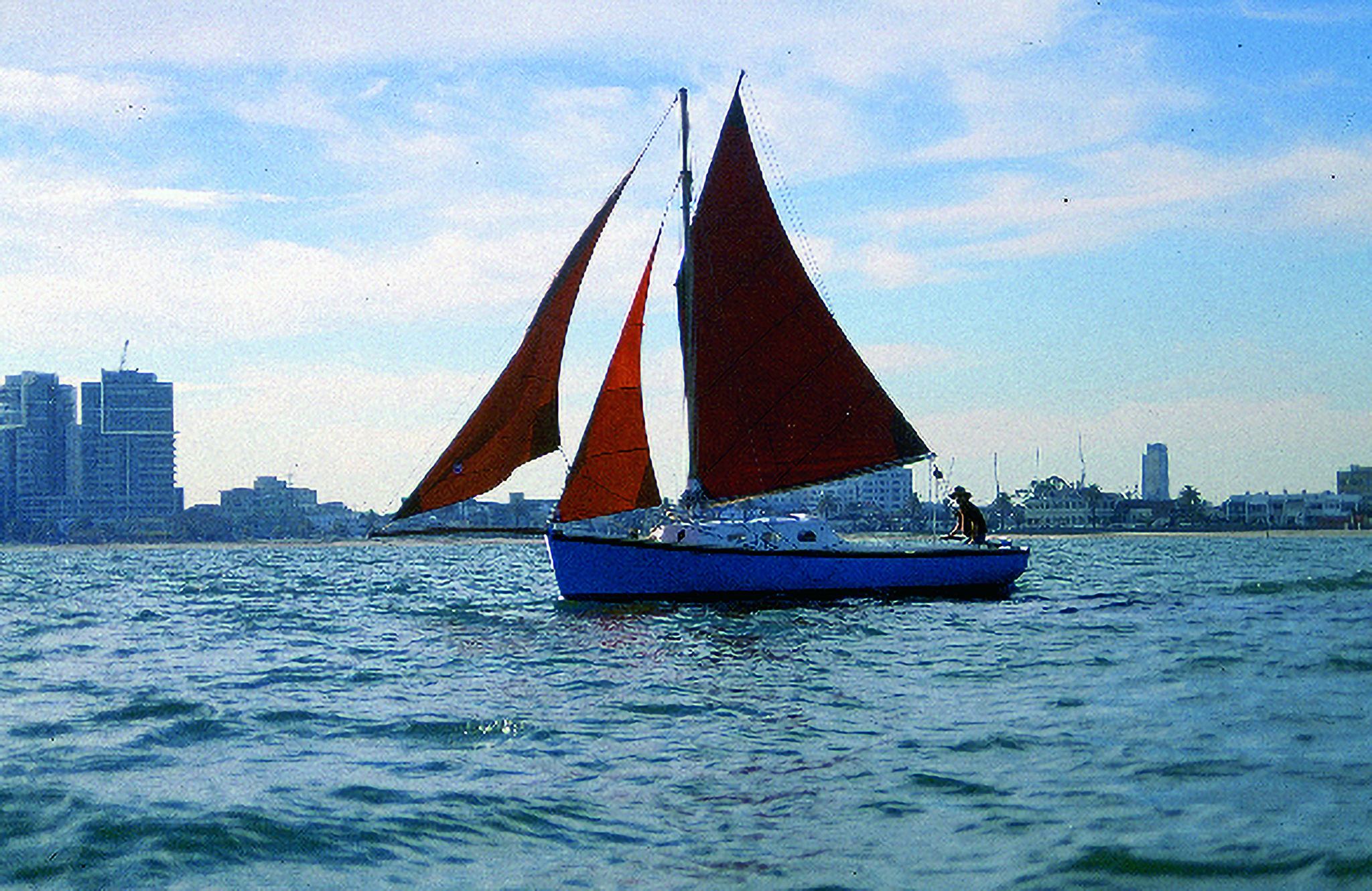 Custodian: Burnham Brothers; 1962 – Mid 1980s
Built on order in 1962 for the four Burnham brothers, a fishing family based in Rosebud, the boat was completed over that winter in the yard of Alec Lacco in Rye, Victoria. Alec used metal moulds that he had applied to make similar sized and proportioned Couta Boats several times before.

Sara Luisa is 24 foot in length, around 8 foot wide with a draught just shy of 3 foot. She was built with a modest cabin, but mainly for storage, and was not built with a centre-case as she was always intended to have a substantial motor to be used for fishing. A huge Thorneycroft engine serviced this requirement for many years, and drove the 12 inch propeller with substantial push, but other smaller motors were later installed.

Boats owned and operated by the Burnham Brothers were mostly moored in the gut-ways just off the Rosebud foreshore directly opposite Boneo Road on the Mornington Peninsula. There was also a mooring near the pier at Sorrento, used if the intention was to go out The Heads the next day, or for a period of time if the fishing grounds outside were more productive. One of the boats, the 27 foot Huia, spent much of her time at the Sorrento mooring.

The one difference of Sara Luisa to most Couta Boats is her very straight keel, with no camber. She was ordered this way as the primary intention was to shoot and retrieve long lines, which were used to fish for snapper, flathead, sharks and whatever else might take a hook. The idea with the straight keel was to help prevent the boat from blowing off course when pulling in the line, as the bow would then have more forward grip in the water. The same principle works when retrieving mesh nets, which were set perhaps overnight, some even baited, and hauled in the next morning.

Seine netting, as it was known by the Burnham brothers, was also successfully carried out on the 24 footer using the same method previously used on other boats. This was to have a bosuns chair at the top of the mast (a rope and wooden stepped ladder ran up the mast) where a spotter would sit and scan for schools of fish. Mostly these would be mullet or bay trout; distinguishing between the species was a trick for trained eyes… the mullet schools tend to flash silver from their bellies.

A dinghy would be towed behind, loaded with the net, and when a school was spotted the boat steered in front of the path of the school and the net fed out and then around the fish. The bottom leaded line would be hauled in under the school, and the closed circle of net then hauled in, perhaps with help from another brother or two if they were fishing nearby. The four brothers were Roy, Stan, Vin and Wal Burnham.

The 24 footer would have extracted many hundreds of tonnes of fish from Port Phillip as well as outside, using long lines, nets, trolling, set lines on oil drums, and of course hand lines used between times. At the time long lines were permitted with 600 hooks set at 6 feet apart, but this was later regulated to 200 hooks. Couta were targeted with troll lines, both inside and outside the Heads. But this was not an exclusively targeted species – commercial fishing, by its very nature, was a very pragmatic way to make a living.

Custodian: Steve Burnham; Mid 1980s – Present
Over time, each brother either passed away or retired, with the sons of Roy taking over the business for some years. But eventually, by about the mid 1980s, the business was unsustainable, and the 24 footer was bought by Steve Burnham, the son of Stan, and was moved to St Kilda, where he had secured a mooring. It was here that the boat eventually was named Sara Luisa, after Steve’s daughters, and acquired a set of sails. It was then that the negative influence of the straight keel was experienced, as when sailing, it makes it harder to go-about through the wind.

Sara Luisa now carries a lug rig, a foresail and a jib, and has had another new diesel motor installed. Fishing is still pursued, although less intensely, and the vessel has made several voyages back to its old haunts at the southern end of the bay and other adventures, including some meanderings outside and down to Geelong for the biennial Wooden Boat Festival.