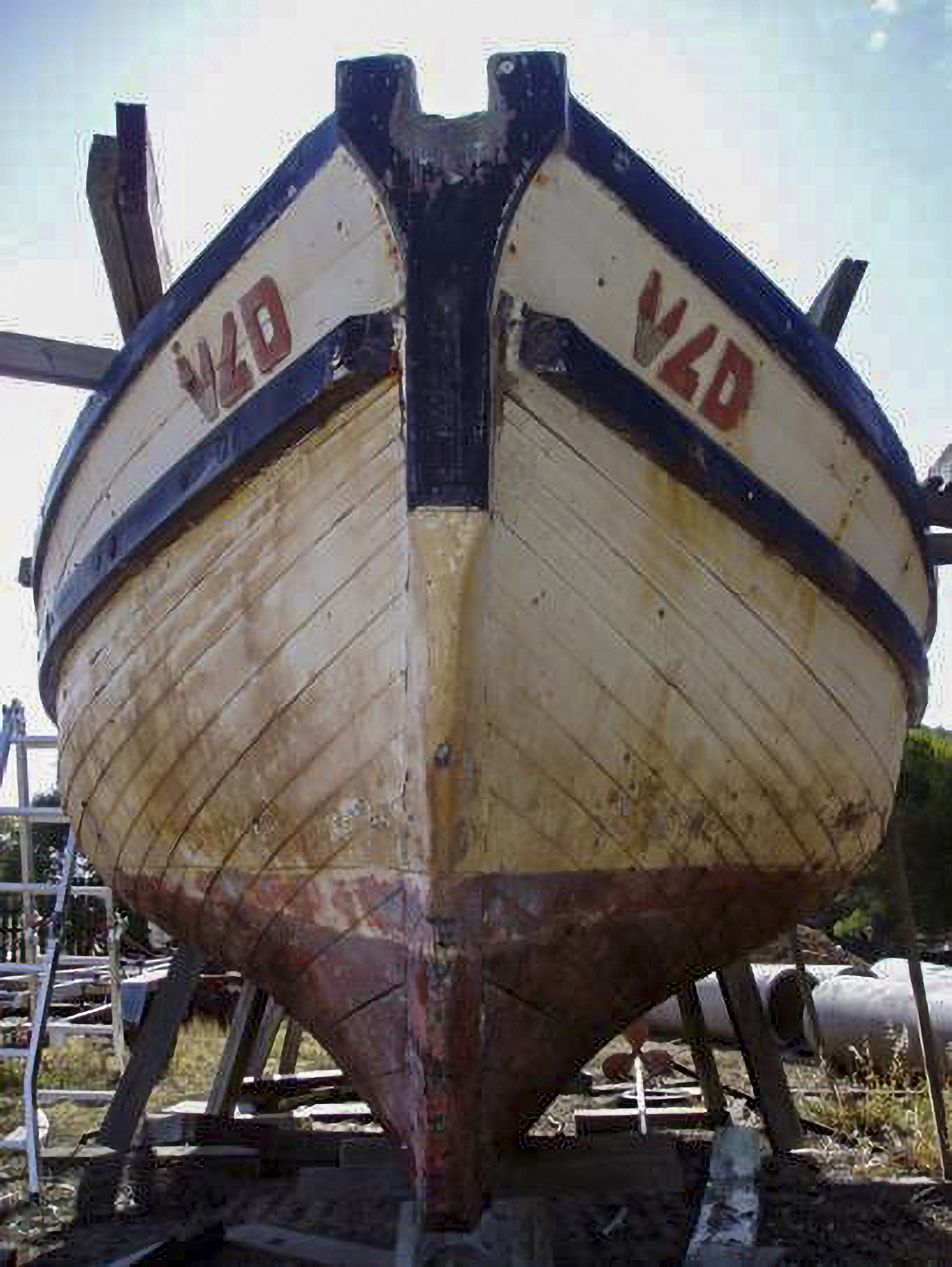 Custodian: Roy Johnstone; 1947 – c1949
Ruby Merle was built in Queenscliff in 1947 by Peter Locke for Roy Johnstone who fished commercially out of Queenscliff. She is 22 foot 5 inches in length. Her planking and original deck were constructed from NZ Kauri, while her keel, stem and ribs were from West Australian Karri.

Her original name of Merle was changed to Freda after Digger’s wife and the original commercial fishing registration was V4D. The boat was used to fish for ‘couta out of Queenscliff and Lorne on the south-west coast of Victoria.

Chris Richards, the son of Digger, recollects that Digger transported the vessel to King Island for the crayfish season in the 1960s, via the King Island ferry to Currie. Having sustained some damage to the vessel during transit on the ferry and after completing a period of successful fishing, Digger set sail from King Island with an old box compass under the radar and unbeknown to the authorities, to successfully return the vessel unscathed to Queenscliff.

In his early teenage years, Chris recalls setting out from the creek in Queenscliff early in the morning with Digger to go long lining in heavy fog. Digger, glancing at his compass and keeping a close eye on his watch, continued on. After some time, Chris looked up and a long lining stick appeared…straight in front of them!

During this time, local Queenscliff boat builder Scotchy O’Byrne removed the centre-case and a modified 14hp Lister Petter motor was installed up for’ard to fit more ‘couta on board. Bulwarks were added after this time at Queenscliff.

Custodian: J Campbell; 1969 – 1971
Custodian: David Love; 1971- 1974
Custodian: Paul Kelly; 1974 – 1981
Ruby Merle was relocated in Lorne in 1969 by professional fisherman J Campbell, with custodianship transferring to David Love in 1971, and then to Paul Kelly in 1974. During this period lifting eyebolts were installed so she could be lifted onto the pier; a small forward cabin and a cray pot winch were also installed.

Custodian: Nino DiPasquale Snr; 1990 – 2004
She was then sold to Nino DiPasquale Snr and continued to be used for longline fishing out of Queenscliff and Port Phillip. The vessel then moved on to Avalon Beach for a short time before being removed from the water.

Custodian: Mark Morrissy; 2004 – Present
In 2004, Ruby Merle was passed on to the current owner who, once a shed was constructed, undertook a five year rebuild. The boat was fully restored by shipwrights Brett Almond and Chris Ratcliffe, with the new owner assisting with the labour throughout the rebuild. She was stripped back with removal of the bulwarks, rubbing strakes, deck and all the internal timbers including beams, knees, thwart, combing and bollards. As with any restoration, many hours were spent swinging the hammer day and night during all seasons over these years. The mast and spars had been removed a considerable time ago with the centre-board slot being covered over and a large Lister motor being installed up for’ard, so the engine bed was also removed.

A new Iroko timber stern was installed as the original had rotted and the planking then tacked back into place. Fortunately, the father-in-law of Nino DiPasquale Snr. was one of the last Huon cutters in Strahan, Tasmania and assisted with the sourcing of Celery Top for the deck and ribs, carlines, beams and also the necessary lengths of Huon to complete the coaming, and other features of the boat, including the engine box and instrument panels. All the WA Karri ribs were replaced and the boat fully reconstructed from a wide variety of new timbers each appropriate to their use.

The boat was relaunched in Geelong, Port Phillip in 2010 and renamed Ruby Merle, incorporating the original name Merle, and was maintained in Corio Bay until the Oregon mast, boom and yard was constructed and sails sewn. Nino DiPasquale Jnr. was integral in the passing of knowledge of the vessel, freely passing on his race skills and knowledge, and crewed the vessel with his usual enthusiasm.

With a good dose of breeze and some rock solid advice and mentoring of crew from local boatbuilder Brett Almond, the Ruby Merle was successful in winning Division 2, securing the last ‘White Jumper’ made from the highest quality Ballarat merino wool.

And once again with some solid breeze for the 2018 Geelong Wooden Boat Festival weekend and the skilful crew of Steve Hull, Paul McKenna and Peter Sebastiani the vessel competed in the Portarlington to Geelong Couta Boat Passage Race, gaining 1st place. Ruby Merle and crew backed up the following day and were successful in winning the Couta Boat Cup.

Ruby Merle moved to Queenscliff in 2018 where she is currently used for sailing, fishing and general recreation.