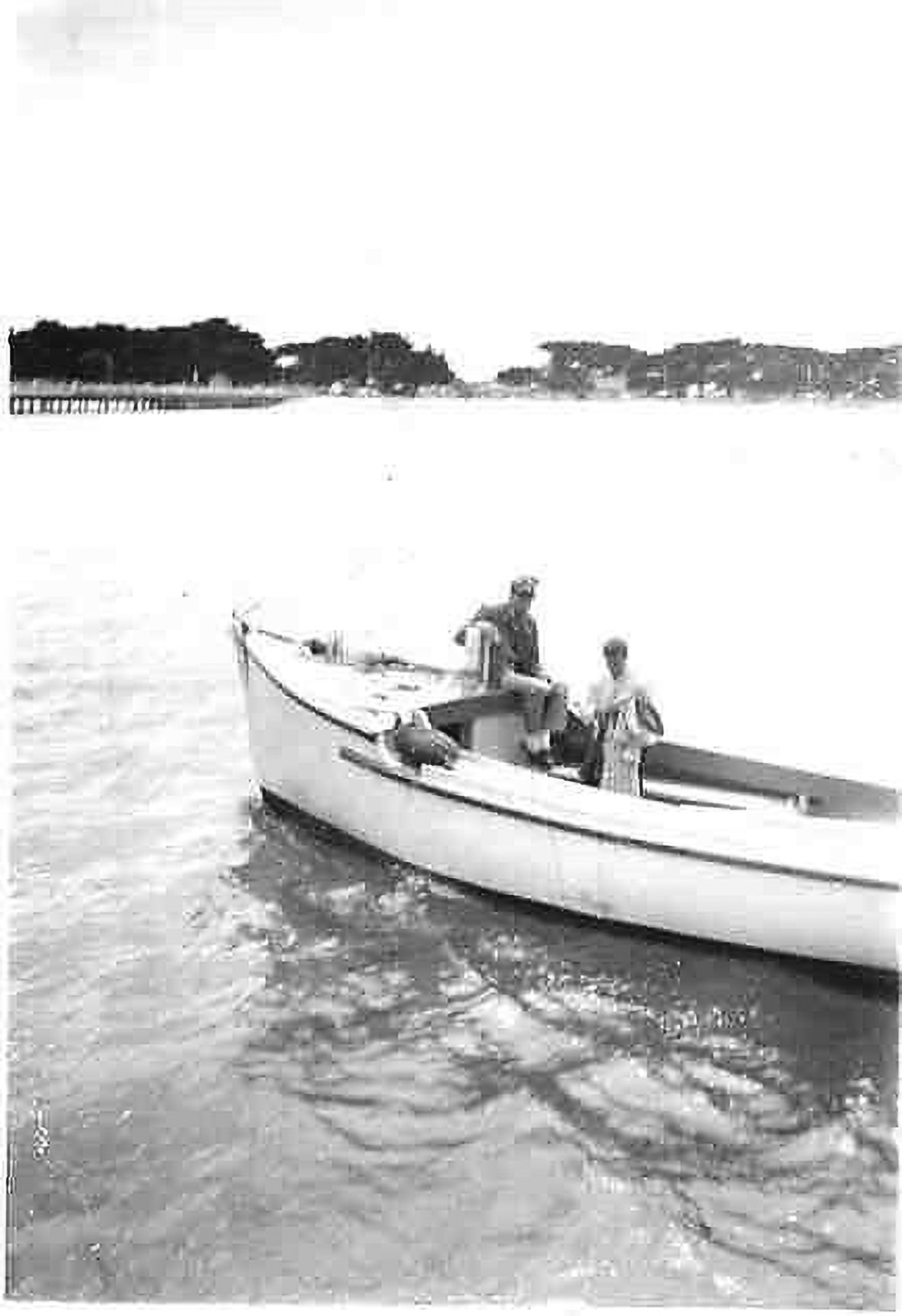 Early Years
Rosebud was built by Cayzer Brothers in the early 1950s in Queenscliff, a fishing port at the entrance to Port Phillip Heads, Victoria.

Lew held the distinction of being the last of the commercial Couta Boat fishermen in Queenscliff. He fished in Rosebud until he was almost 90 years of age and enjoyed legendary status both on and off the water. Amongst the locals, Lew was commonly referred to as the ‘barefoot fisherman’.

The vessel was originally named Frances, after Lew’s mother. But some time later she was renamed Rosebud. A member of the Ferrier family confirms that ‘Rosebud’ was the name of a shipwreck in Port Phillip. For a time, Lew’s father, nicknamed ‘Salmon’, was the lighthouse keeper at the South Channel Pile and possibly at McCrae on the southern shoreline of Port Phillip.

Lew spent his long life fishing for ‘couta in the Rosebud, both inside Port Phillip Heads and beyond, venturing almost daily through The Rip, into Bass Strait. Usually he fished alone, but on occasions he was accompanied by local lad Graeme ‘Wombat’ Willson who began fishing with Lew when he was just 15.

At the end of each fishing haul, Rosebud always delivered Lew safely back to Queenscliff. She was moored in the ‘Creek’ – the channel between Swan Island and Queenscliff, later known as the Cut, after a rock walled channel was cut through in 1935-36. In later years, she was berthed in the Queenscliff marina.

As the ‘couta catch became depleted over the years, Lew was granted permission to set fish traps for the Chinese restaurants: parrotfish or bluenose being a very common catch. For a time in the 1950s, his fishing operation was interrupted when a mast came down and crushed his neck; as a result of this accident he was confined to a wheelchair for quite an extended period.

For a few years when Lew ventured to Tasmania, his brother Steve Ferrier became the custodian of Rosebud, having purchased her from the Wright fishing brothers, to whom Lew had, previously, sold the boat. However, on his return to Queenscliff, Lew reclaimed the vessel and continued to do what he loved – fishing out of his Rosebud.

The tyranny of distance was a very real factor for the ‘couta fishermen along the southern Victorian coastline. Often they had to seek waters beyond their own local vicinity to haul a catch. So from time to time, Rosebud sailed well beyond the Heads looking for ‘couta. Lew had fishing licences for Victorian and South Australian waters. In an interview he asserted that he frequently journeyed at certain times of the year as far down the coast as 48 nautical miles away to Apollo Bay and to Lorne 30 nautical miles to the westward following the fish. Lew took Rosebud all the way to South Australia, following the snapper as far as Whyalla at the top of Spencer Gulf. It is thought he may have shipped Rosebud by train for some of the way but he certainly sailed Rosebud back to Queenscliff.

Lew’s nephew, Peter Ferrier, recalls fishing as a 12 year old with Lew out of Whyalla for snapper and seeing a 20 foot tiger shark take three snapper off a long line. Even though Lew caught plenty of fish on these trips, the market was tough.

Gregory Peck, Ava Gardner and Lew Ferrier:
Rosebud had her moment of fame in 1959 when Gregory Peck and Ava Gardner came to Victoria to star in Neville Shute’s film ‘On the Beach’. Lew was given the task of transporting the two stars on Rosebud to a scene ‘shoot’ on a submarine located in the vicinity of The Rip. Folklore has it that the stars signed the Rosebud’s rudder, but later Lew painted over the famous signatures, not realising the significance. Such was the humble nature of the man.

For many years, Rosebud played an important role in the annual Couta Boat regatta, which was part of the Queenscliff Maritime Festival. Lew conducted the ‘Blessing of the Fleet’ ceremony from the foredeck of Rosebud, which was always berthed in a prominent location in the Harbour. The ‘Memorial Sail Past’ was also a key feature of the regatta in which Lew was involved. He would strategically position Rosebud on the course for Couta Boat skippers to sail past and acknowledge his salute, in memory of those in the fishing industry who had been lost at sea.

Lew’s nephew recounts that in his final years when Lew could no longer sail, he would visit his beloved Rosebud, and then he would visit the office of Parks Victoria. He would climb the stairs, read the paper while having a cup of tea and generally fall asleep. However, in more recent years when his health quickly declined, it became more difficult for him to undertake the morning routine. Tim Phillips also recalls that Lew often went to the Wooden Boat Shed in the vicinity of Queenscliff Harbour. There for a few hours, he would sit in the ‘Lewis’ chair and pronounce his opinions on life and all matters relating to fishing on the Rosebud.

Custodian: Stephen Tuohy; 2017 – Present
Following Lew’s death in 2017, the Ferrier family sold Rosebud to Stephen Tuohy who works for Parks Victoria in Queenscliff. Under Steve’s custodianship Rosebud has now been completely restored for use as a family recreational vessel; she has had a cabin refitted, similar to the cabin fitted in the original build. It is Steve’s intention to have the vessel remain in Queenscliff as part of the town’s maritime history.