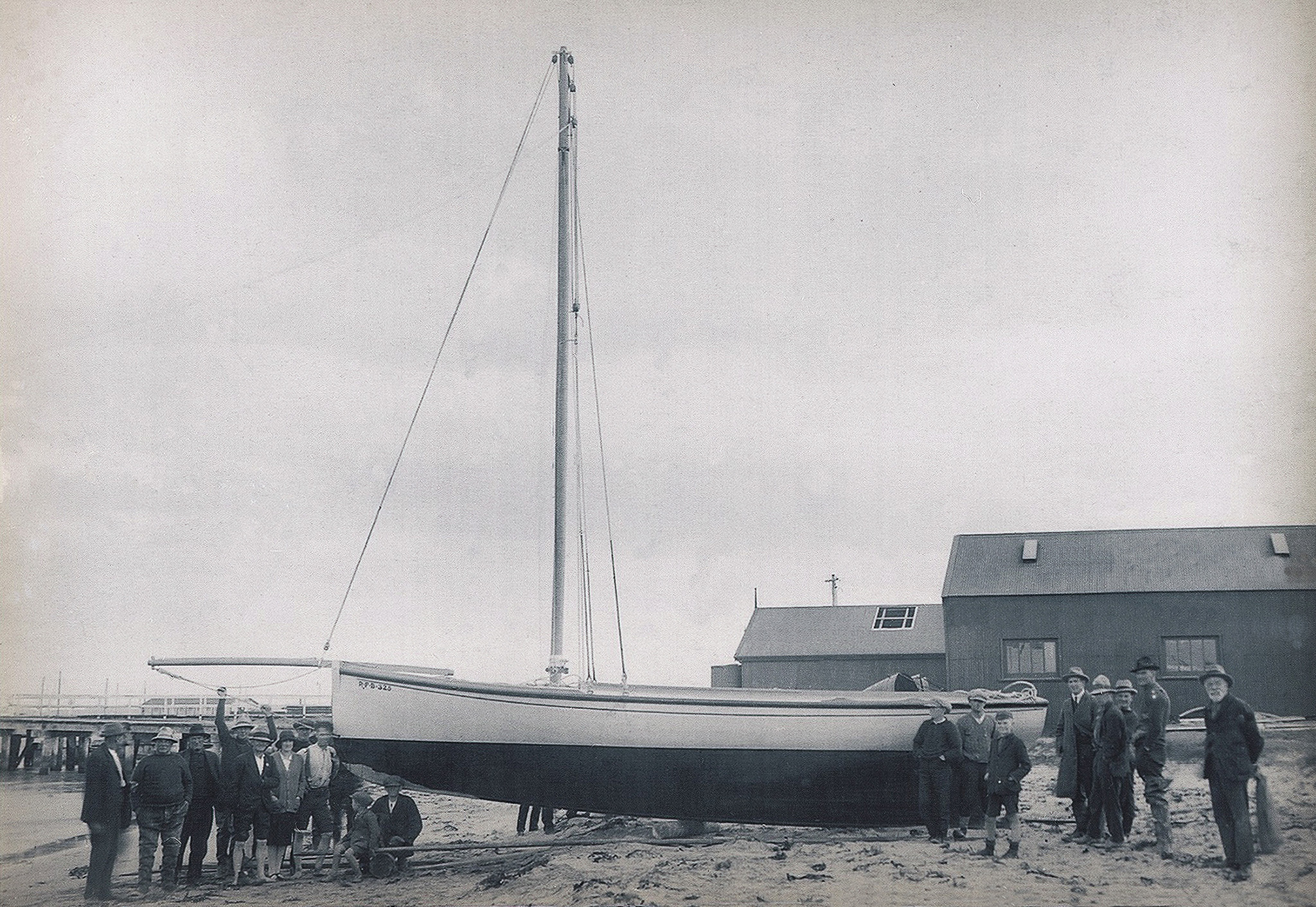 Ripple is significant also as the first Couta boat built by Peter Locke in his own right as a commercial boat builder in Queenscliff. Locke’s father was a fisherman and farmer operating from St Leonards on the Bellarine Peninsula, on the south-western shores of Port Phillip. When Peter first left school he went fishing with his father, but his interests lay more in the repair and maintenance of boats. He was repairing a boat that had been wrecked when spotted by Mitch Lacco.

He must have been satisfied with the job because he asked me if I would like to come and work for him at Queenscliff.

After a couple of years Peter took over the business. Ripple was the first of a great many fishing boats built through a remarkable career that produced not only a great number of couta boats, but a wide range of vessels from dinghies to shark fishing boats of 70 foot.

The lines of the Ripple show characteristic Locke modifications to the earlier Lacco lines: a little fuller along the garboard to assist ballasting and under the engine bed, and hence through to the stern. He had the idea that the ballasted hollow around narrow bilges strained the boat a bit too much so he straightened it out. Consequently his boats tend to be a bit wedgier. This means they roll a bit unless more heavily ballasted, but have a greater carrying capacity. She is shallower of draft than many, but this probably results from a specific request from the owner who wanted to negotiate the shallow waters around the sand banks off Sorrento rather than to ply The Rip.

Mitch Lacco and Peter Locke worked from a shed at the rear of 31 Beach Street, Queenscliff. In the time before the making of The Cut, or Creek in 1934 to 1936, the newly constructed boats could be launched directly into the waters of Port Phillip from the rear of the shed. Today the water’s edge is some hundreds of metres further to the east.

Fortunately, photographs remain of the launching of Ripple showing the shed, the old jetty off Wharf Street, and the sense of occasion that accompanies any new launching.

Custodian: Erland ‘Tally’ Erlandsen; 1924 – c1940
Tally Erlandsen was one of six sons of Danish parents whose father had jumped ship and settled in Sorrento in 1890, living in what is now the Sportsgirl Store in the main street and working as a boat repairer and fisherman.

On returning from World War I, Tally went fishing with his brother Percy before commissioning Ripple for himself. She still carries the number ‘RFB 325’ on her bow – Victorian Registered Fishing Boat No 325. The daily catch was unloaded on the Sorrento Pier to a trolley and rail system that carried the boxes to the foreshore for pick up by truck to be taken to the Melbourne markets. Schnapper were plentiful in the channels and they made a good living catching up to eighty per cent of all fish taken from the South Channel.

Tally became something of a Sorrento identity: President of the Fishermen’s Co-op, Master of the Lodge, Member of the Citizens Association, Member of the Returned Services League, Member of the Foreshore Committee and for a long period resident in Erlandsen Avenue, and Ranger of the adjacent foreshore and camping ground. Following the outbreak of World War II he took over operation of the Sorrento Sea Baths and Kiosk, offering boat hire and fish sales in addition to bathing and refreshments.

In 1945, with Ted Mackinnon, the owner of Mermerus, Tally built a jetty at The Docks, opposite Erlandsen Ave, and here he wintered the Sorrento fishing fleet. The remains of the winch used to haul boats from the water and across the sand to a hard stand area can still be seen at the head of the hardstand.

In 1948, Tally instigated the founding of the Sorrento Sailing Club, was appointed inaugural Commodore and conducted the first race from the Sorrento Docks. His Honorary Life Membership and the continuing use of the name “Tally” amongst the fleet of SSCBC rescue boats, recognizes his substantial and enduring contribution to the Club.

Custodian: David ‘Dave’ Newman; c1940 – 1950s
Tally ceased full time fishing when he took over The Baths and Ripple lay idle for some time before being purchased by Dave Newman of Rye. He refurbished her and fished from Rye until moving to San Remo in 1944. At one time she was swept away in a storm, but was recovered and repaired.

Custodian: O’Halloran Family; 1950s – Unknown
Ripple then passed to the O’Halloran family in the 1950s and was used for recreational fishing along the Gippsland coast. By this time, she was purely motor driven and a cabin had been added for comfort and practicality. The O’Halloran children can vividly recall retreating to the cabin top as their grandfather struggled to subdue a rather large shark in the cockpit, succeeding only after its thrashing had splintered the engine box.

Custodian: Robert Finkelstein; 1988 – 1998
Ripple was rediscovered at Port Albert in 1988 by Couta Boat Club member Robert Finkelstein. Being in the printing trade, Robert procured a couple of tons of printer’s lead (a lead antimony alloy) as ballast. Following a substantial refurbishment at the Wooden Boat Shop, Tally’s daughter, Mrs. Ida Clarke, presided over her re-launching at Sorrento on 4th November 1989.

Custodian: Patrick and Susan O’Hara; 1998 – 2000
In 1998, Ripple was purchased by Patrick and Susan O’Hara of Perth. There were by then a number of Couta Boats in the west and, on hearing Ripple was for sale while visiting Susan’s mother in Sorrento, the O’Hara’s wasted no time in securing her and arranging transit across the Nullarbor. And so, based from the Royal Perth Yacht Club (RPYC), she joined the growing fleet of Couta Boats sailing on the Swan River in the West.

Western Australian registration gave Ripple the number 1926, acknowledging the date of her first launching. It was the custom at RPYC to dress in whites for races, a significant step up in the world from the oil skins her first owner would have donned back in 1926 for a day’s fishing. In late 2000, the Ripple was again for sale.

Custodian: Peter and Sally Hannah; 2000 – 2017
Having both grown up at the SSC, being members of the CBC and having a further connection to Tally Erlandsen as part of a syndicate of Couta Boat sailors who purchased and completed a redevelopment of the Sorrento Baths, Peter and Sally Hannah were well aware of the significance of Ripple to Sorrento’s fishing boat heritage. Although it was great to see Couta Boats being sailed in other parts of the country, they were disappointed when a boat of such local significance ‘went west”. When Tim Phillips said she was for sale it was agreed;

Ripple has so much Sorrento history, she really ought to be here.

And so, notwithstanding they had a perfectly good boat in the Armadale, the Hannah’s brought Ripple back to Sorrento. In the year 2000, after another road passage across the Nullarbor, she returned to her home waters 75 years after first fishing in them, to be moored off the club founded by her first owner.

When first restored, she had been fitted with a slightly undersized rig. Using some Oregon salvaged from a warehouse demolition a one-inch wide timber was scarfed into the existing yard over a 10 foot length adding a couple of feet in length, and an extra 150 kilos of lead was added (the first sail, without the ballast was a bit too much on the edge). For some 17 years, she participated fully in the Couta Boat race program, winning just the occasional trophy, including a second in the Season Aggregate.

It is fair to say Ripple’s shallow draft and wedgy aft sections make her great for fishing on the drift and carrying a load of fish, but not the fastest boat in the fleet. No epoxy coatings here. Like most of her contemporaries he was tarred inside and out when first built and has remained a ‘wet hull’ ever since. Due to her extra ballast and shallow draft, she does not climb to windward as well as some of today’s designs, but she will withstand any conditions without a worry. She, or perhaps her crew, performed at her best in a stiff breeze with a number two jib.

Custodian: Sorrento Sailing Couta Boat Club: 2017 – Present
When the Couta Boat Club entered a memorandum of understanding with the SSC it was fundamental that the newly combined SSCBC further the objective of preserving heritage and promote the sailing of Australia’s unique Couta Boats. What better way to do so and to introduce sailors and supporters to the Couta Boat than to offer sailing experiences on an iconic boat so intrinsically linked to the club? In 2017, Ripple was purchased by the SSCBC, completing the cycle and ensuring her ongoing contribution to the life and heritage of the Club.

Ripple is now central to the Club’s program to introduce sailors of all ages to Couta Boat sailing, as well as being available for family sailing, picnics, twilight cruises, corporate and other events. And under the supervision of a qualified staff member, racing with the Couta Boat fleet.

Second in the Season Aggregate