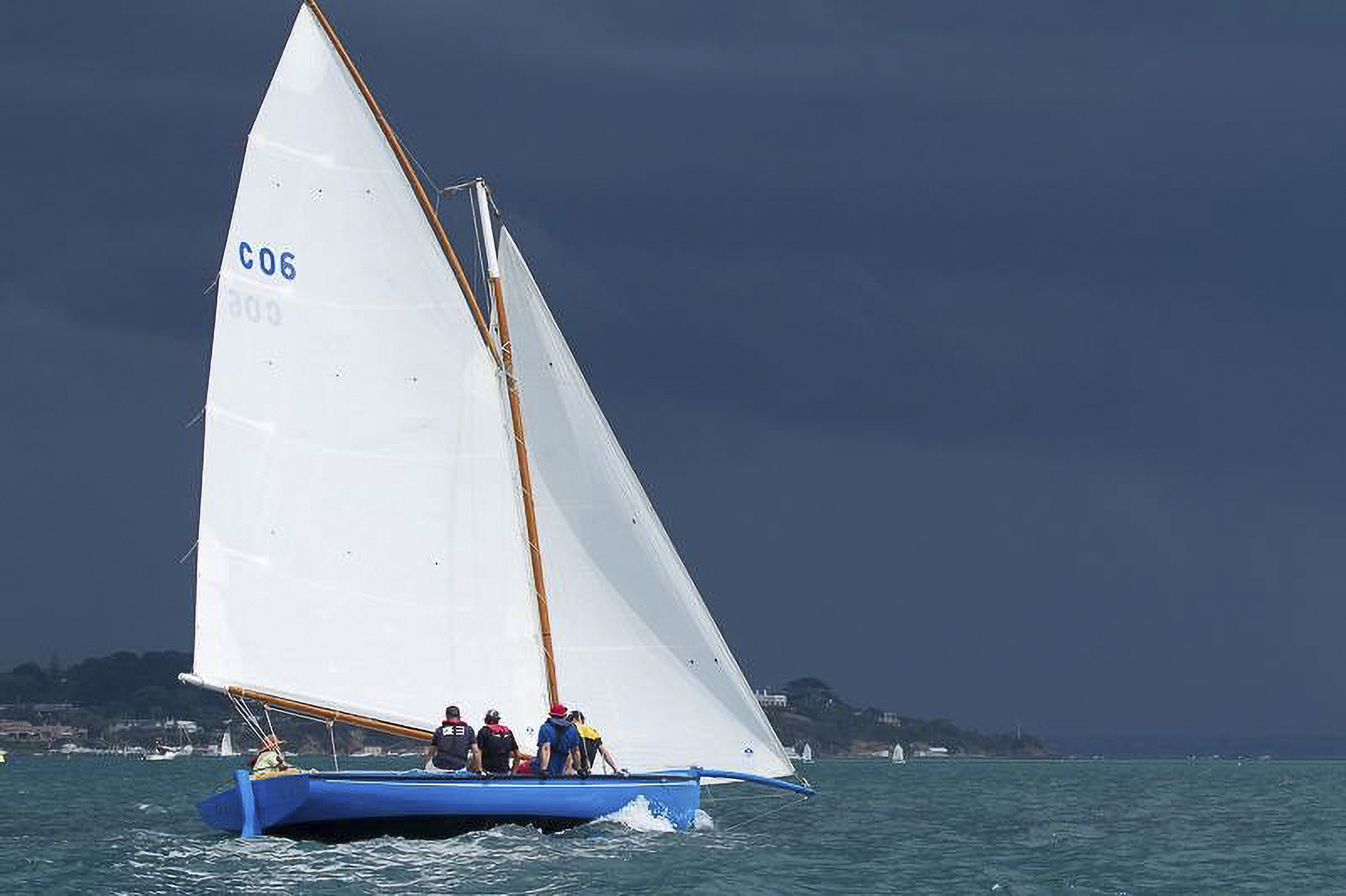 Designed and plans by Ken Lacco.

The Rip has been part of my life for over thirty years. Chris Sinn

1984 was life-changing for Sorrento local Chris Sinn. It was the year in which he built his beloved Couta Boat Rip C06.

After acquiring three lengths of green spotted gum for a keel, from a mill in Gippsland, Chris then struck a deal with Tim Phillips at the Wooden Boat Shoop (WBS) in Sorrento. With a background in roofing, Chris offered to clad the Wooden Boat yard’s new shed in exchange for free rental.

Work then began with celerity, with Chris’s canary bird Max serenading from the bow of his boat as she was being built. Chris observed that Ticonderoga and Wagtail progressed rapidly, as there were two or three blokes working on them under Tim’s direction. But Chris was ably assisted by his partners Jonathan Hooper and Colin Stuart who would arrive most weekends and help with construction and advice.

The timber selected was Celery Top Pine for the ribs, planking and deck, Merbau for the centre-plate case, Baltic Pine which he picked up from a house that was being wrecked for the floor, and Oregon for the spars and deck beam. But in the process of the build, Chris developed medical condition of carpal tunnel in his hands as a result of the hard heavy work in running the ribs through the thicknesser. Richard Hodgkinson was then called upon for the arduous task of holding the dolly.

Richard’s involvement in the build triggered a chain of significant events that would be life-changing for Chris. Richard’s beautiful sister Jane would wander down regularly with sandwiches for lunch, and Chris reciprocated by constructing a swing in the yard for her children, Zoe and Zap. It all dovetailed.

I thought the way to her heart was through her kids… so I built them a swing out of planking from the yard to win them over! I not only built a boat, but found a wife and family!

Rip was launched in the summer of 1986 from the Sorrento Boat Ramp area. However, due to a low tide the launch did not go according to plan. There was not enough depth to launch her safely. Martin ‘Mully’ McKinnon, wasn’t going to spoil the day for the assembled crew and advised them to relocate to the Rotunda in Sorrento Park. When they arrived, he had removed the perimeter fence and drove right through the park.

Christopher, we’ll only get one shot at this, he exclaimed!

Out on the hard sand the guests assisting in pushing Rip into the water. Chris’s mother, doing the honours, was dressed in her finest. However, while cracking the champers over the bow, Wilma ended up well and truly waterlogged. Chris’s brother Steve, a Jesuit priest, gave the blessing and the guests sang ‘Star of the Sea’ as she slipped off the trailer.

But all was not yet smooth-sailing! Rip began to sink at a rapid rate. The Merbau centre-plate case that was constructed from green timber in the middle of winter had opened up in the summer heat. Luckily, all the invited guests took to bailing and pumping to keep her afloat, until she took up.

Rip has brought great pleasure to the Sinn family over the ensuing years. After her launch, she joined the Couta Boat fleet for regular racing, and also sailed beyond Sorrento to Queenscliff, Portarlington, Geelong, Mornington and Melbourne. In 2006, she participated in the festival marking the occasion of the Commonwealth Games in Melbourne. She was used for many family occasions including transporting Chris’s daughter on her wedding day. The family has enjoyed day trips, even overnight camps on Rip and, over the years, caught plenty of fish.

In 2013 Rip entered another phase in her sailing life.

When the Southerly C2008 syndicate dissolved in the winter of 2011, Tim Phillips approached Chris Sinn on behalf of Andrew Skinner. Chris had embarked on a major construction project at the Wooden Boat Shop of a 46 foot cruising smack which was taking up a lot of his time. Consequently, Rip was becoming a bit of a ‘mooring minder’. Andrew Skinner met with Chris and suggested that if he wanted to, Andrew would pick up the maintenance and insurance costs for a year and competitively sail her at Sorrento for the season.

A new headsail was purchased, and with the assistance of Wayne ‘Moose’ Johnstone, Rip was re-rigged, re-roped, and tuned. ‘Moose’ sailed in many races with Andrew, with great success.

Unfortunately, in that first year of racing Rip was involved in a nasty pre-start on-water incident with anther Couta Boat who, in an ‘out of control moment’, t-boned Rip amidships. The WBS did a great repair job and within weeks Rip was back out there. The repair bill was quite extensive.

We had so much fun with the Rip, punching above our weight against the much faster newer boats she was often in the top half dozen in the fleet.

Custodian: Rodney Eggleston, Scott Smith and Chris Sinn; 2017 – Present
In 2017, Tim Phillips quietly informed Andrew that Chris would like the Rip back. A quick meeting was held, hands were shaken and the Rip returned to her original custodian for exactly the same price exchanged four years earlier. Thanks goes to Andrew and his syndicate for allowing this to happen.

For Chris, it was a great thrill when his son Rodney ‘Zappy’ Eggleston and Scott Smith joined him in purchasing Rip back. Built with his hands, the Rip remains one of Chris’s greatest achievements and has had a profound effect on his life.

It was the beauty of the Rip; it was going out for a day sail to the Pope’s Eye… picnics at Queenscliff, and to this day it’s a bond that holds our family together!