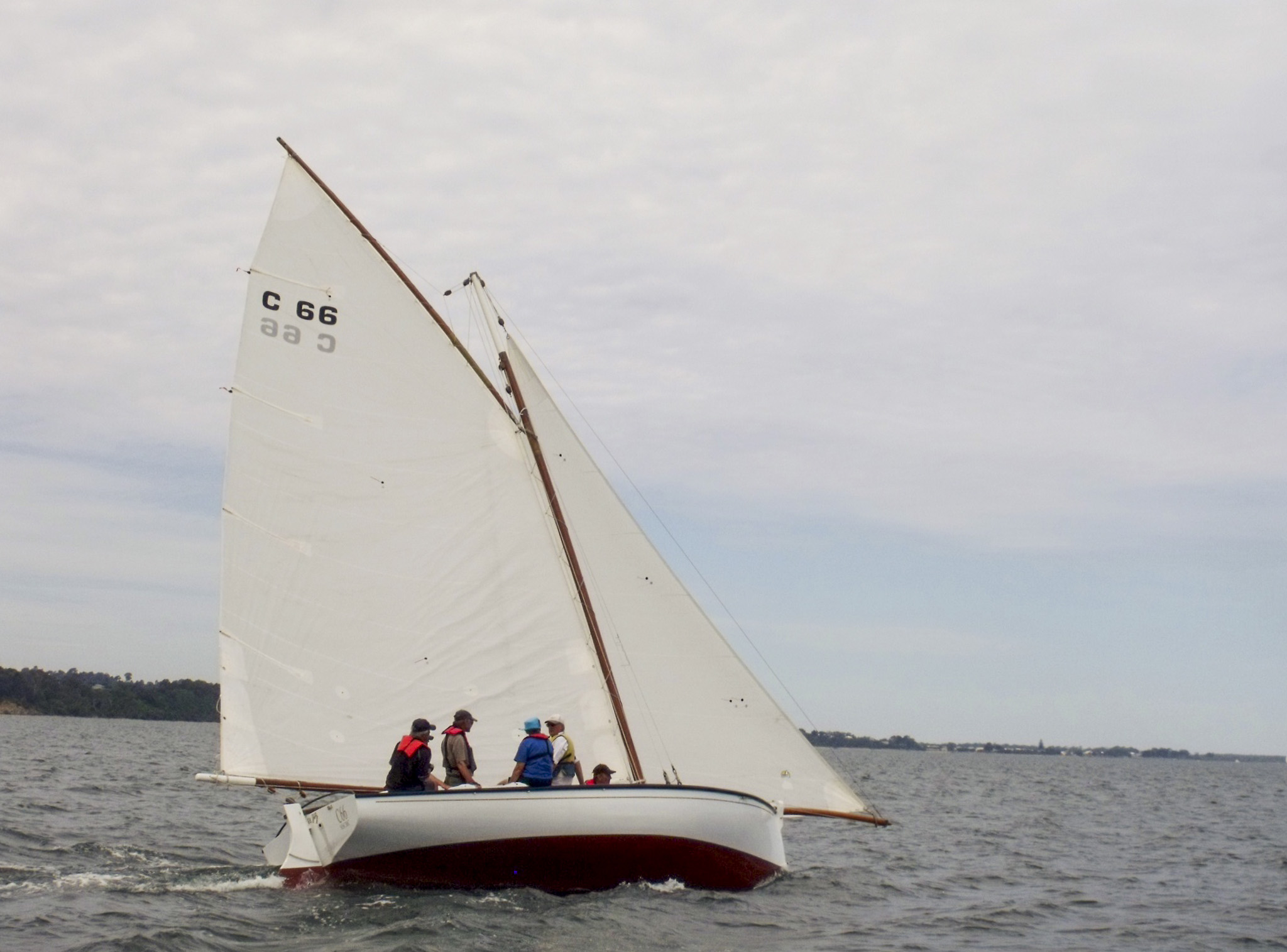 Early Years
Pearl was built by well-known boatbuilder Mitch Lacco in Queenscliff in 1926, the year in which Mitch Lacco sold his boat building business to his apprentice, Peter Locke. She is 25 foot 8 inches in length.

Custodian: Maurie Kelputis; c1966 – Late 1960s
It is believed that Pearl was owned by some butchers from Geelong who sailed her out of Queenscliff. However, the details of Pearl’s early history are not verified. Suffice to say, professional fisherman Garry Kerr recalls that Pearl was purchased by Maurie Kelputis, a fisherman of Portland, circa 1966, where she became one of the Couta fleet that fished the surrounding waters for ‘couta and cray.

Pearl remained in the waters of Portland and was utilized as a fishing vessel for the next 10 or so years until the 1980s when Tim Phillips went searching the southern Victorian coastline for old Couta Boats. He came upon Pearl and so began a new chapter in her history. Pearl was taken back to Port Phillip, from where she originated.

Custodian: John Carew; Early 1980s – Late 1990s
In the early 1980s, the fleet of Couta Boats that was sailing off Portsea was quickly increasing in numbers, with local sailors taking a keen interest in their design. Tim purchased Pearl for John Carew and she became the first boat to occupy the new Norling Shed at the Wooden Boat Shop (WBS) in Sorrento where she was rebuilt.

Pearl was relaunched in 1990. She was raced and pleasure sailed out of Sorrento by the Carew family until hse was sold in the late 1990s to Andrew Hayes and Grant Crowthers.

Custodian: Andrew Hayes and Grant Crowthers; Late 1990s – 2006
Andrew and Grant enthusiastically sailed Pearl in many races and won Division 2 of the inaugural KPMG Couta Boat Classic. Andrew is positive this was a controversial result as he is sure they started in Division 1. After rounding the Portsea mark he claims they got a very favourable wind shift, reaching all the way to the finish line and crossing 1st overall!

It was towards the end of their custodianship that Pearl suffered an almost catastrophic event. She had just been freshened up; new paint, anti-foul and a service at the WBS and was on a mooring at the Sorrento Aquarium when a very strong northerly storm came through and she broke her mooring. She was driven by the storm into the boat ramp retaining rocks where good fortune helped save her.

Tim Phillips was surveying the storm from his home located on the higher land above, when he saw that the boat had come to grief. He rushed down and whilst being battered by waves still managed to remove her ballast and motor with only a few tools. She was saved, but the resultant damage was a 2 foot to 3 foot hole amidship, on the starboard side.

Pearl was then laid up in the yard of the WBS awaiting the decision of the custodians on whether to repair and restore, or take the insurance and sell.

The syndicate commissioned the WBS to repair the damage replacing 10 or so ribs and planking. She was refastened as required, fitted with new Iroko floors, new inner gunwales painted with 2 pack epoxy and was tight and a non-leaker. She looked stunning inside and out and was ready for her next chapter.

Pearl brought nine years of enjoyment to these custodians who regularly raced her in Division 1 at Sorrento and used her for the odd pleasure sail and fishing trip.

In 2015, Ken Barlow of Gippsland had made a trip from Metung to look at another boat at the WBS and saw Pearl freshly painted and enquired if she might be for sale. His timing was perfect as there had been murmurs in the syndicate that it was time to pursue other interests. The decision was made to sell to Ken.

Custodian: Ken Barlow; 2015 – Present
Ken Barlow became the new custodian of Pearl in November 2015, almost a year to the day after suffering a cardiac arrest while on board a Dragon racing yacht on Lake King in the Gippsland Lakes.

Ken declares that Pearl is a delight to sail and that she is loved by all family members. He recalls the day she sailed in a race with grandchildren and their friends on-board. After the race, as they were returning Pearl to her berth in Chinaman’s Creek, the kids wanted a swim before they all headed back to the club-house for the presentation. Ken received a phone call, the news being that Pearl had won the race. Apparently their on-water opposition remarked:

Fancy being beaten by a bunch of kids and a dog!

Ken took these off-handed humorous remarks in his stride, as being part of the fun.

Ken has kept Pearl well-maintained and has recently pulled the motor, a 30 hp Yanmar, out and had it rebuilt. The bilge was cleaned and painted, together with the side walls and under the deck. All the Dyneema on board has been replaced and a new set of sails have been added to her suite.

Pearl is berthed in Chinaman’s Creek, Metung on the Gippsland Lakes, Victoria.