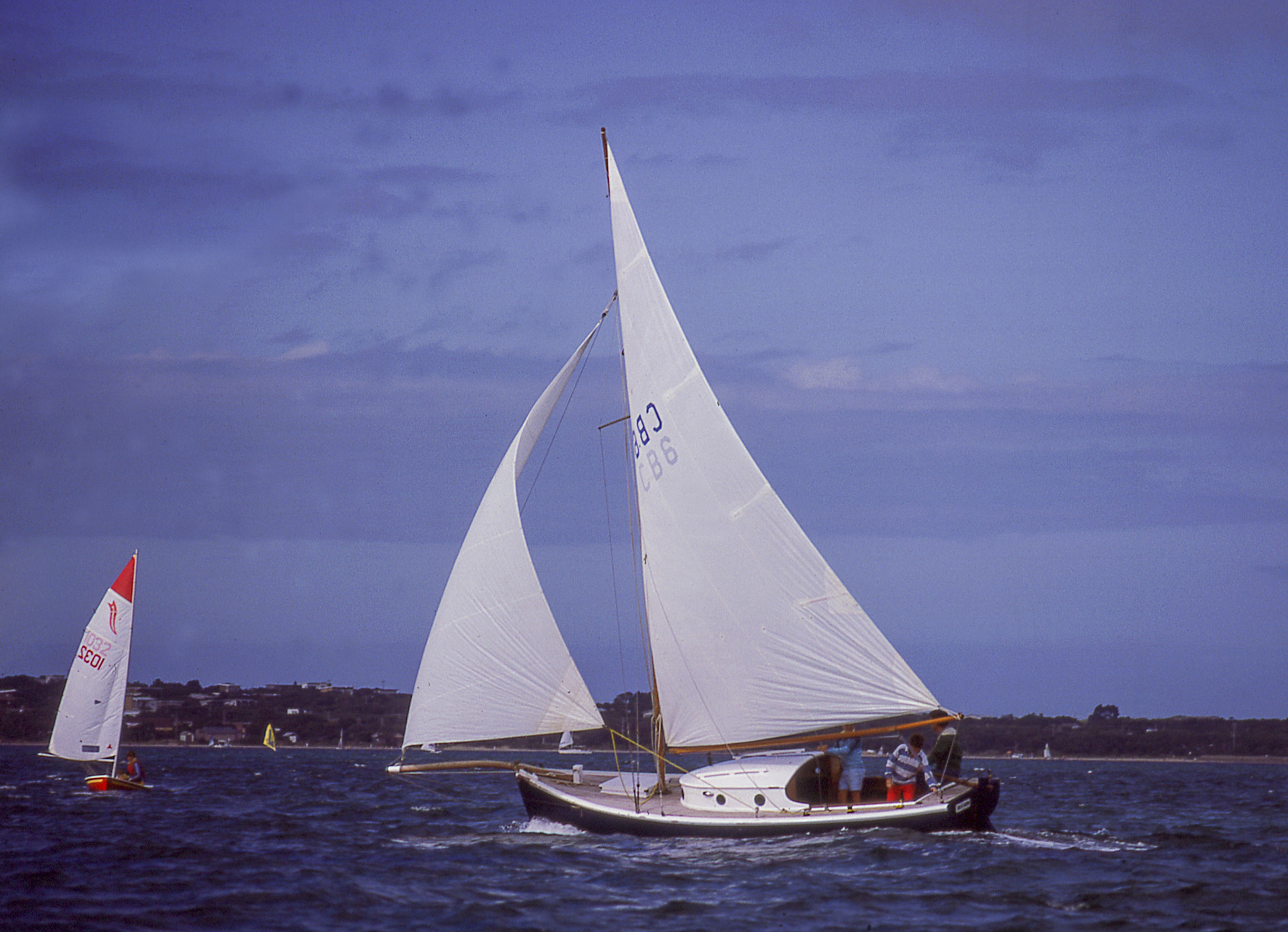 Custodian: Stanley Currow; 1947 – Unknown
Merna Ruby is a classic Couta Boat built by Stanley Currow Snr in 1947 on the Esplanade at Altona, Victoria. She was built for fishing on Port Phillip and is 22 foot 11 inches in length. The name of her original owner is not known.

Stanley undertook to build boats after his normal work hours as an aeronautical engineer. His clients were mainly locals who wanted a wooden boat principally for fishing on Port Phillip. There can be found numerous For Sale advertisements in ‘The Age’ newspaper and the ‘Williamstown Chronicle’ advertising boats for sale during the 1940s and 1950s that were built by Stanley Currow.

Stanley Currow Jnr who still lives in the Altona area, recalls that his father built a number of Couta boats; he would devote long hours to the build, working into the evenings and at the weekends.

Custodian: Marcus Burke; Early 1960s – Mid 1960s
A keen fisherman, Marcus used the boat principally for fishing but also for sailing, with the occasional race against other gaff-rigged boats. He named her Margaret Duggan after his maternal grandmother. Later, Marcus played a pivotal role in the revival of Couta Boats as recreational sailing boats. He was also the founding President of the Couta Boat Club.

Custodian: Clive Smith; Mid 1960s – 1973
After five years or so, Marcus sold Margaret Duggan to Clive Smith who used her as a ‘putt putt’. His son Clive Smith Jnr. recalls many trips with his father to fish in the vicinity of Portsea and out to Mud Island, and the times he spent camping with his cousins on the boat when on the mooring. She was moored off Fishermans Beach in Portsea and for a time she was stored in Farnsworth’s boatyard. In that time, the mast was lost so she was never sailed by Clive Smith Snr.

Doc renamed the boat Merna Rubie after his mother and proceeded to re-rig her.

Having purchased a copy of John Leather’s ‘The Gaff Rig Handbook’, Doc became interested in the design and rigging of Couta Boats; the book provided the impetus to rig the boat and join the other boats that were sailing in the local waters. A local part-time boatbuilder assisted in the rigging, ensuring she was well-powered to take on her competitors.

She wore five sails; a trysail, two head sails, a top sail and her main. This still didn’t make her a high tech sailor. She didn’t have a centre-plate and subsequently would be sucked sideways from Portsea almost into the Queenscliff creek! Chris Sinn , part-owner, then says, the new owners can at their very least boast that their boat is the only one to have sailed in every one of the Portsea Cup’s history of 16 years. And now she has a centre-plate!

She was one of six Couta Boats to compete in the first Portsea Fishing Boat Regatta. The race was sailed from off the beach below the Point King property ‘Merthon’.

The owners continued to sail Merna Rubie in various races and regattas at the southern and northern end of Port Phillip for another eight years. But when Rip was launched in the late summer of 1985, it was time to consider selling her. Merna Rubie was sold to David Campbell in 1987.

Custodian: David Campbell; 1987 – Circa 1997
After purchasing property in Sorrento in 1986, David was keen to find a suitable fishing, recreational and sailing boat to buy. He consulted with Tim Phillips and ultimately purchased Merna Rubie.

Although he was not an experienced sailor, David was keen to sail Merna Rubie in the local Couta Boat fleet as did her previous owners. He asked his good friend Denis Wilkins who had recently sold Rita, to help sail her.

Together, they campaigned Merna Rubie in numerous races for about nine years, with Denis as either the helmsman or chief tactician. They had success in the Petersville Regatta run by Blairgowrie Yacht Squadron, winning their division. They also ensured she was an entrant in the annual Portsea Cup.

After selling his Sorrento property in 1996, David sold Merna Rubie including the mooring and dinghy, and he has some lasting memories.

The Merna gave us a lot of pleasure as a recreational and sometimes fishing boat over the years and it was sad to part with her, but we have fond, lasting memories of good times and lots of fun as members of the Couta Boat Club.

Custodian: Unknown; 1996 – 2011
Merna Rubie was sold to a Sorrento local whose name is unknown. She remained on her mooring at Sorrento and was used as a pleasure craft. Eventually, she was sold with a new name.

At the time, Peter was looking for a mooring for his Eloise. After being informed of an old boat sitting on a mooring at Sorrento Sailing Couta Boat Club (SSCBC), Merna Ruby and the mooring came into his possession. But the boat needed much attention. The mast had broken off and was lashed with the boom and ropes down on the deck, although the sail cover was still intact. There were also great piles of white bird droppings everywhere.

The condition of the boat, however, did not deter this potential owner who arranged for her to be delivered to Mark Abbott at Corsair Boats, Rosebud on the Mornington Peninsula, Victoria. Peter’s son Michael Cook recalled the moment when Merna Ruby was pulled out of the water:

When we pulled her out of the water we found that there was about one metre of weed and shell fish all over the bottom of her. The fishermen launching their boats had never seen anything like it. They took hunks of mussels for their bait.

Peter has always liked a project, whether it was renovating houses or boats, or building small boats. Michael believes his father saw Merna Ruby as his next challenge; if the engine was in good shape and did not need too much work he would keep her, but if it was unrepairable, then he would have quickly sold her on. The marine mechanic had the engine going without much trouble, so Peter embarked on restoring Merna Ruby in January 2012, in Corsair boat yard.

Her top sides and cabin were painted and her underside was antifouled; the broken mast was cleaned up where it had broken, and the bottom end fitted into the plate inside the cabin; the boom goose neck was raised up so that the boom sat at the correct height, and her rigging was shortened so the mast could be stepped. Three months later Merna Ruby was back on her mooring fully rigged.

The family made good use of Merna Ruby with friends to motor up and down the coastline around Sorrento, Blairgowrie and Portsea. Peter also sailed her a few times but the mainsail needed to be reefed due to the short mast, so she was not easy to rig. But he never raced her.

Dino then decided to totally restore the hull and topside. He stripped her back to bare wood and then spent the winter of 2015 applying over 11 coats of 2-pack and another seven coats of paint as well as antifoul. He repainted the topside and totally restored the deck with an oil finish. He also extended the mast to full sail requirements.

Over the next few seasons, Dino sailed Merna Ruby competitively in a number of races at SSCBC. Much to his delight, she was awarded the 2016 KPMG Couta Boat Classic trophy but without having sailed in the event. Due to a strong wind forecast, the race was abandoned but the trophy was duly distributed via a barrel-draw! Dino still has the trophy on display.

Merna Ruby was fitted with totally new rigging and a new suit of sails, and sailed in a number of races in the 2018 season. However, a re-location for work overseas brought about a change of circumstances and for the next two years Merna Ruby remained on her mooring, stripped of her sails and with her centre-plate removed. On Dino’s return from overseas in 2020, the time was right to sell the boat.

Custodian: Paul Chenoweth; 2020 – Present
In 2020, after he retired to Narooma on the south coast of NSW, long-term sailor Paul Chenoweth was looking for a boat that he could safely sail on the nearby Wagonga Inlet and that could keep him distracted and occupied. The prospect of purchasing a Couta Boat was appealing.

Our biggest attraction to Merna Ruby was that she had heritage. We liked the style of Couta Boats, and we fell in love with Merna Ruby from the photos and decided she was the ideal boat for us.

Since the purchase, Paul has made contact with some traditional timber shipwrights who are excited that Merna Ruby is now in Narooma, which is the heart of timber boats on the NSW south coast. Paul plans to use her for recreational sailing and to feature her in the yearly Narooma Boats Afloat Festival where like-minded people can showcase and share their passion for traditional timber boats.