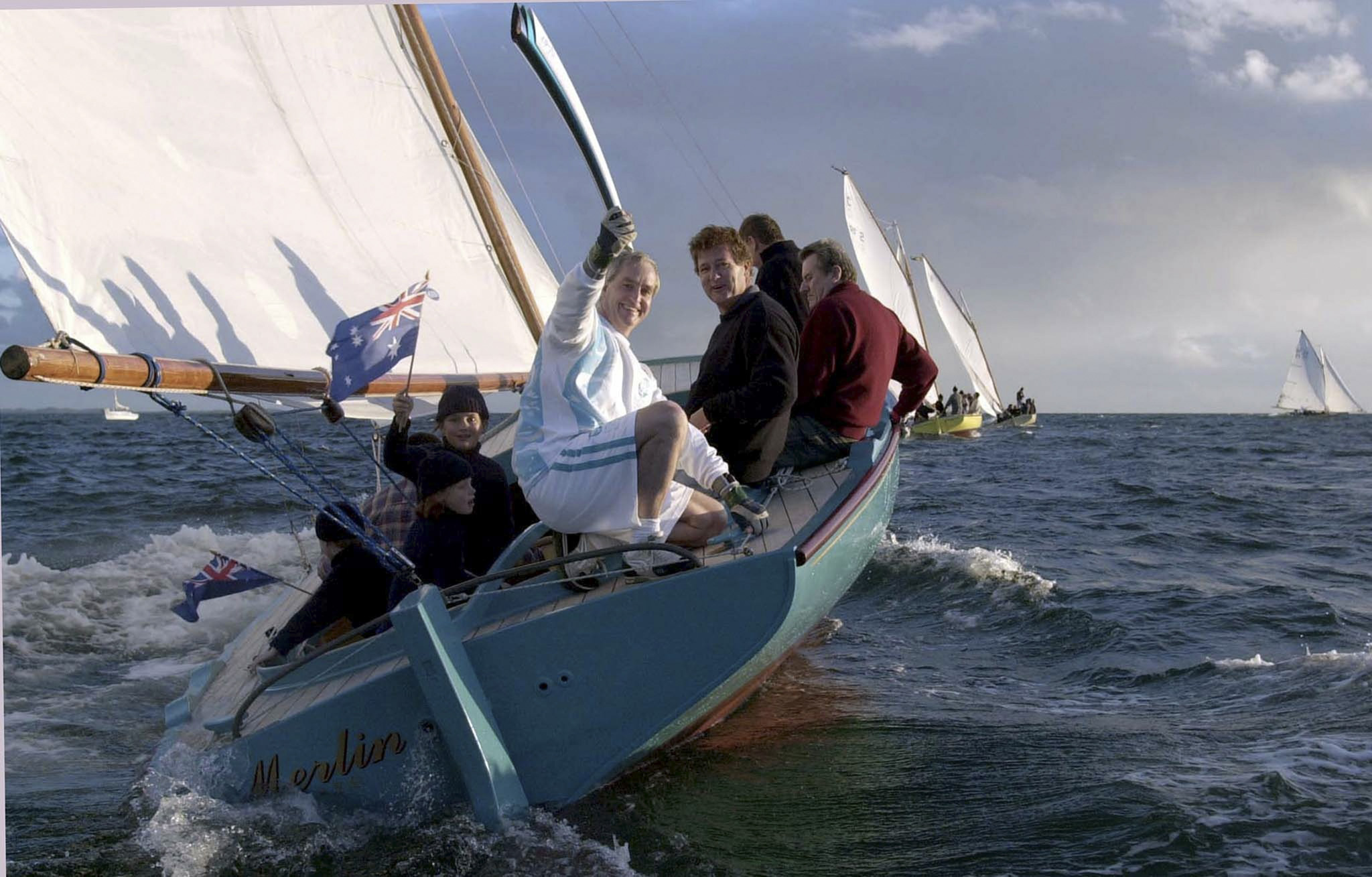 Designed by Will Baillieu / Built by Tim Phillips, Sorrento, Victoria

Custodian: Geofrey Ogden; 1987 – Present
Geofrey Ogden was the first of the Western Australians to purchase a Couta Boat. His interest in the iconic boat began through his friendship with Will Baillieu, Clive Beckingsale and Grant Smith from Portsea, Victoria. Geofrey raised the idea of having a boat built in 1986 and sought the design of Sally, which he had seen in Portsea. Will Baillieu advised him to have a new design completed, which would be more of the traditional size of around 26 to 27 feet, Sally being 28’ 6”.

Will Baillieu was commissioned to design Merlin at the end of 1986. She is based on Ajax, but is 4 inches deeper in the forefoot and is finer in the stern quarters, with a sweeter transom. She is very much like Surprise in the deadrise, with straight lines from waterline to keel for more than half her length. This is to minimise wetted surface area and seems to allow a boat to climb to weather more easily.

The boat was built by Tim Phillips in Sorrento, Victoria out of Celery Top Pine planking on Celery Top ribs with a Queensland Beech deck. After she was built, Will Baillieu rigged her and was sailed out of Portsea for six weeks or so, to trial the boat and rig.

In her period of sailing at Portsea, Merlin was more than a match for Ajax and Muriel in straight line speed. The deeper forefoot makes her a slightly drier boat than Ajax and does not seem to diminish her turning ability too much. She is an outstanding performer to windward.

A strong supporter of the Royal Freshwater Bay Yacht Club (RFBYC) in Perth, Geofrey has encouraged and persuaded others in WA to follow suit. Now there is a strong and ever growing fleet in Perth.

In the lead-up to the 2000 Olympic Games in Sydney, Merlin was chosen over all other Western Australian boats to carry the Olympic torch across the Fremantle Fishing Boat Harbour.  The organising committee was looking for a traditional Western Australian fishing boat to carry the torch-bearer and flame, and it took some persuasion to convince the committee that a gaff-rigged Couta Boat actually fitted the category of a WA fishing vessel – the gaff-rigged iconic Couta Boat Merlin was selected to perform the honours. This honour has become part of the history of the longest torch relay in Olympic history.

Since her arrival at RFBYC, Merlin has consistently and successfully raced in the local Couta Boat fleet, but not without some on-water mishaps. She has been sailed under in two capsizes on the Swan River because Geofrey was prepared to push her to her limits. The first sinking was in reasonably shallow water, but the second time she went down nearly 90ft. Fortunately, she was salvaged on both occasions, without more than superficial damage.

In the summer of 2011, Geofrey arranged for Merlin to be transported from Perth to Sorrento to compete in the Portsea Cup. She was accompanied by Simon Tracy and Carl Ollivierre. Carl is a fifth-generation boat builder from the Caribbean, where he was actually born on a gaff rigger, and was a leading hand on the HMB Endeavour Project. Carl has spent the last 30 years carefully maintaining Merlin.

Merlin had a smooth trip across the Nullarbor until, when approaching Eucla which is located close to the South Australian border, an accident occurred when the boat came away from the trailer and somersaulted several times, and wound up being sent to the Wooden Boat Shop in Sorrento to be rebuilt.

In the following summer, Geofrey enlisted an entire Western Australian crew to sail Merlin in the 2012 Portsea Cup. But as she only went back into the water the day before the race, there was no opportunity for the crew to fine tune her after the long period in dry dock. The crew comprised Michael Ahern who was on the helm, with Geofrey on the mainsheet while Carl Ollivierre was up front; a few more WA locals complemented this crew.

The first start of the race for the Division 1 fleet resulted in a general recall, which was disappointing for the crew as they had a rip-roaring first start. On the second start, however, they missed the start signal by a minute, but early in the race made up for the lost time and outstripped other contenders. Unfortunately, one of the last rounding buoys drifted; Merlin rounded the disputed mark 4th and, while the locals chose to sail along the shore, Merlin sailed the rhumb to the finish line and won by two minutes. The course marshall came and congratulated the crew, his view was that it was a fair win.

However, the race was abandoned and rescheduled for the following week.

Back in the West, Geofrey continues to be a keen competitor and has encouraged and persuaded others to acquire a Couta Boat. As a result, there is now a strong and ever growing fleet in Perth.

Merlin has always been bright turquoise green with maroon rubbing strake and jibboom. She continues to be maintained by Carl Ollivierre who, in Geof’s view, has been the heart and soul of the WA Couta Boat fleet.

No one can free climb a mast to repair a shackle mid race like Carl.

Carl bought a special feeling and a lifetime of gaff experience to the Couta fleet and is always advising other Couta Boat owners on rig tweaks and maintenance work, whether they want that advice or not!