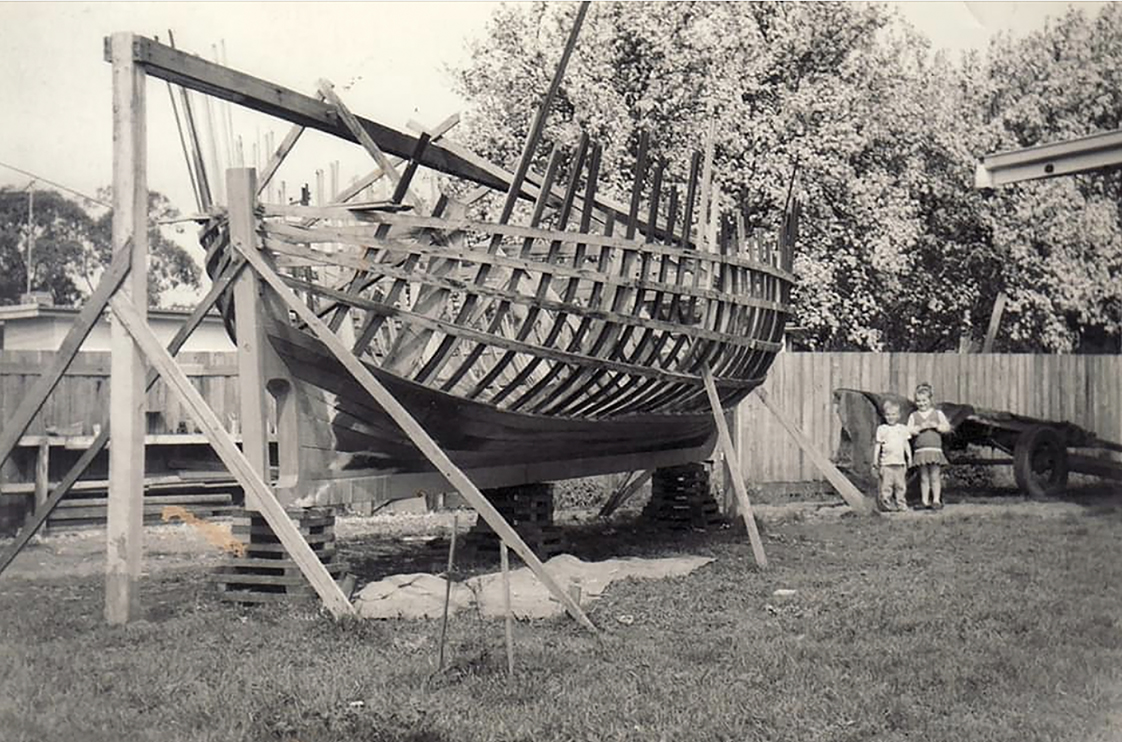 Custodian: Dugga Beazley; 1964 – Present
Margaret, commonly known as Butterbox, is believed to have been the last double-ended net boat built for fishing on Port Phillip in Victoria. She was designed by Port Melbourne commercial fisherman Dugga Beazley and built by Kevin Ball in his backyard in suburban Melbourne in a six month period from late 1963 to early 1964.

At the time of the build, Dugga owned and fished out of the double-ender Pearl, but he wanted a boat that was more seaworthy and one that could carry a larger weight; the principle being to carry more weight she would need more volume and be more buoyant.

Margaret was built at 26 foot instead of the usual 28 foot length for net boats, and included 6 inches more beam than usual. Built with a full bow to lift through heavy seas; her deeper for’ard gives her a grip on the water, where others were built shallow to allow the bow to drift off. While in other double-enders only about an inch of the keel protrudes at the bottom of the boat, in Margaret almost 4 inches protrudes.

Dugga named her after his sister Margaret, but his uncle George Beazley remarked that on account of being short and beamy she looked like a ‘butterbox’,  which became her known nickname.

Once Margaret was launched, she was used for long line fishing. In her first year Dugga and his father Oppy caught 3 ½ tonne of snapper in her one day, after having left the nets in the water overnight. The trip home after that catch was somewhat perilous with such a large catch. On this day, a commercial radio broadcaster was in the vicinity of the lagoon on the arrival of Margaret, so Dugga and Oppy gave him some of their catch. In his broadcast that day he announced that there was a boat loaded with fish down at the Port Melbourne Lagoon; Dugga and Oppy sold £600 of snapper. On any other day they normally would sell about £10 to £20 worth!

In 1969, due to tighter regulations, long line fishing was closed in Port Phillip from the end of September to the 1st April. From April to September, fishermen could use a long line with 500 hooks, or 750 hooks with two fishermen working the lines. For about 10 years, Dugga and his father Oppy Beazley worked Margaret and Pearl according to the regulations. In the winter months they would work one boat out of Port Melbourne and the other from Point Wilson near Corio Bay at the western end of Port Phillip. Then for the summer months, both boats worked out of Port Melbourne. When the regulations changed to 200 hooks per fisherman, they were able to fish from the one boat.

Margaret was installed with a 30 hp Lister diesel and although not rigged for sailing, she always carried a small mast and sail, in case of motor failure.

Dugga recalls one ‘snapper run’ in the bay when he and his young nephew Andrew set out at 3 am from the Werribee River in a light northerly and in calm waters, following the snapper. They took about seven boxes of snapper before the wind strengthened to 20 knots, so lifted the lines On their trip back in a strengthening northerly, water was hitting the bow then dropping into the boat, to the point when the floor began to float. Dugga headed Margaret into the wind towards home and then put up the mast and small sail. From that point onwards, the boat did not take any water.

Today, Dugga uses the boat mainly for recreational fishing, but she is also functional as a towing boat. In past years, she has featured in a few TV commercials and a few commercial movies.