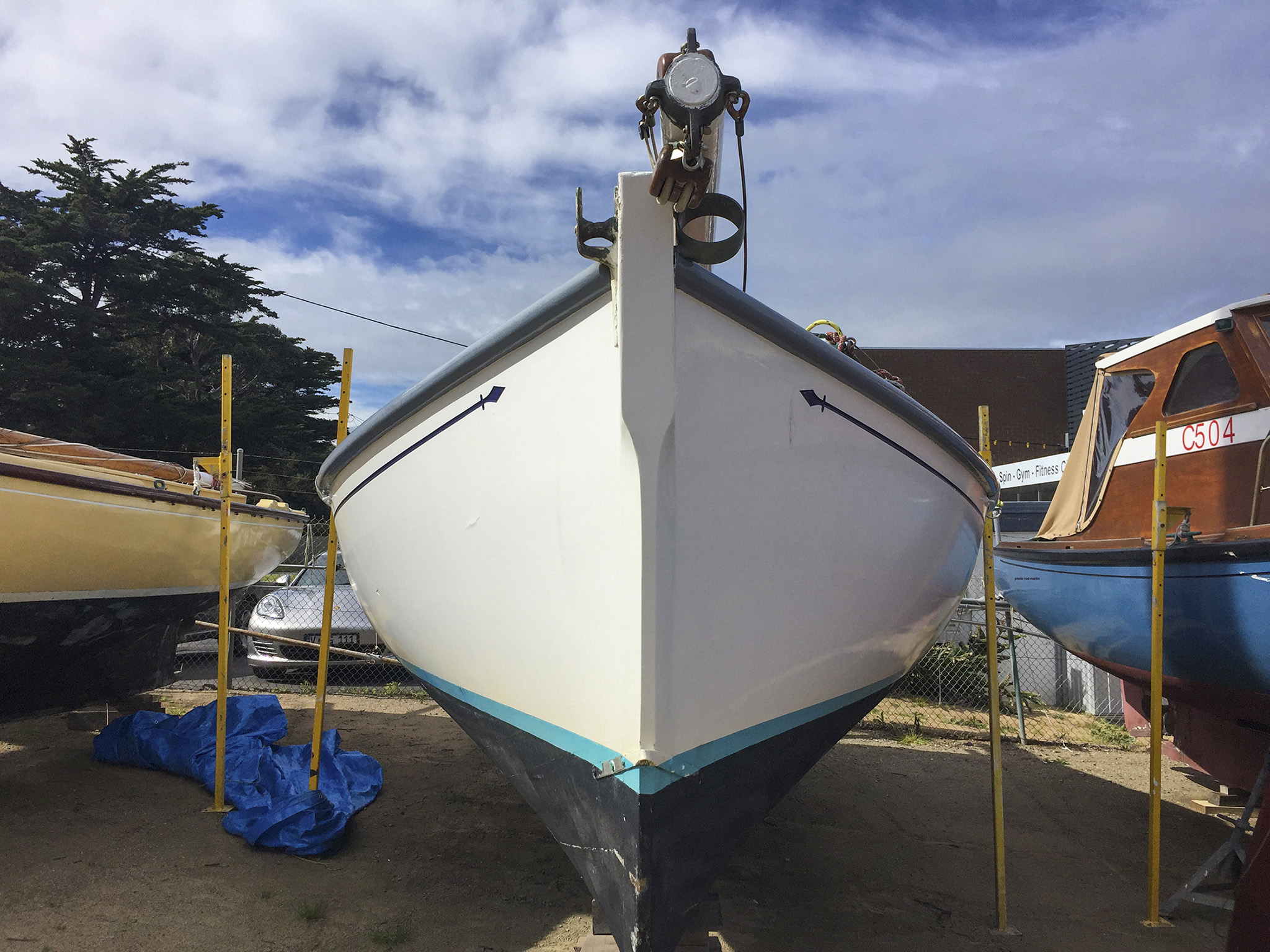 Custodian: Mark Johnson; 1988 – 2002
The first custodian of Makama was Sorrento sailor Mark Johnson. His interest in boats derived from his grandfather, L M Walsh, who was a second-generation shipwright. Grandfather Walsh had a shed with a launching crane and jetty on the Maribyrnong River in Melbourne, Victoria for approximately 40 years, closing down upon his death in 1973. Vale Grandfather Walsh.

In early 1988, on a visit to Phillip Island, Mark met with boatbuilder Ken Lacco, more so to look at and marvel at his wonderful Couta Boat designs. During the visit, Ken asked if Mark was interested in having a boat built as he wanted to apprentice his grandson, David. He said his own son, Neil, would be involved, the Celery Top planking would be sourced from Tasmania, timber for the keel from Gippsland, and they could start in a few weeks. Without hesitation, Ken and Mark shook hands and the adventure began!

For Mark, the process of the build was an enjoyable one, especially getting to know Ken, who was in his early 70s. He was a thorough gentleman with the most interesting stories spanning his father Mitch’s boat building years in Victoria at Queenscliff, Rosebud and Newhaven and hundreds of fishing yarns all humbly told.

Makama was named after Mark’s grandfather’s favourite cruiser. She was finished in November of 1988. After a few shakedown sails, Mark, along with Neil Lacco and a friend Eddie, sailed her from Newhaven, around through Port Phillip Heads to Sorrento, a trip Mark still fondly remembers. Neil even brought along a ‘couta jig, a simple piece of teak wired to a hook and on cue; hooked a nice fish which was cooked that night.

In 2001, Makama, along with a number of Sorrento-based Couta Boats, returned to Newhaven on Phillip Island for a weekend regatta and dinner to honour Ken Lacco’s contribution to the development and success of the Couta Boat.

Mark declared that Makama was a beautiful boat and always a source of great pleasure and fun, owning and competing.

She was leased for a year to a syndicate of three experienced Sorrento Sailing Club sailors, but were then novice Couta Boat sailors: Michael Heaton, Richard Hurley and Ralph Wilson who had a lot of fun on her to move on the following year and bought Kate.

However, around 2002 it was time to sell Makama.

Custodian: Fred Haig, David Hendy, Harley Moffatt and Andrew Skinner; 2002 – 2008
In 2002, a syndicate was formed that would become an ongoing Couta Boat syndicate for many years. It comprised Fred Haig, David Hendy and Andrew Skinner and later Harley Moffatt. Harley had introduced the initial syndicate to Couta Boat sailing when he was campaigning his 27 foot net-fishing boat Elsie E and was looking for some regular crew. Andrew started turning up for races and then one day asked David to come too and from that moment, they were hooked. Then, when needing some strength and entertainment, Fred joined the crew.

So it was in the winter of 2002, when Mark Johnson put Makama C77 up for sale. Andrew recounts:

As Makama was a family name for Johnno, we decided to rename her. There are many renaming ceremonies available and fortunately they mostly tend to involve alcohol, so we subscribed to one involving a lot of cheer and after being surprised that nobody had called their Couta Boat, Barracouta, that’s the name she was given.

The new custodians also observed that most Couta Boats were white. Tim Phillips sort of insisted on it, but that seemed odd because his own Muriel is a beautiful teal blue green. However, breaking with tradition, they painted the newly named Barracouta ‘Stars & Stripes Blue’ a colour uniquely made for Dennis Connor’s America’s Cup boat.

Being a syndicate for the first time, they had visions of great success for Barracouta. And they certainly had some, but the boat was always going to be a mid-fleet boat that would get her share of success on performance handicap. They sailed her regularly until the 2008 season when they decided to have the Wooden Boat Shop (WBS) in Sorrento build them a new Couta Boat, the Southerly.

Besides the serious sailing, owning Barracouta brought some testy circumstances as well as moments of light relief for the syndicate. After the syndicate had closed the deal with Mark Johnson, David, being a canny businessman, had asked for and received from the WBS, a shipwright boat survey before they inked the deal. After that, the boat went into the WBS yard for its winter maintenance. It was then they received a call from WBS that the centre-plate case was full of wood rot and would need to be replaced for $8,000. David wrote to the WBS attaching the survey document advising that this was not their responsibility and that the WBS should refer it to their Insurer. The silence was palpable. Of course, the syndicate paid the bill!

On occasions, the syndicate sailed Barracouta to the northern end of the Port Phillip, to compete in regattas. However, it was not always smooth sailing. When Andrew and Fred were returning to Sorrento from a regatta in Melbourne, they ran out of fuel. Jeffrey Richardson on C97 came alongside and asked the duo if they knew what they were doing. They admitted, ‘No’, and he proceeded to come aboard, refuel them with diesel they didn’t have, bled the engine with tools they didn’t have and got them motoring again. All for the price of a slab of beer!

Come 2008, the syndicate sold the boat for what they’d paid for her, to Martin Ambrens, one of their regular crew. Andrew Skinner’s parting words still resonate with the syndicate today.

We loved the Barracouta. It cemented our interest in these great fishing boats, she was our first love.

Custodian: Martin Ambren; 2008 – 2015
Having crewed on Barracouta for a number of years, Martin declared she seemed the logical choice for his first Couta Boat. And so a group of neophytes, including, and especially her skipper, started as the ‘new team’ Barracouta in the 2008 Winter Series at Sorrento Sailing Couta Boat Club (SSCBC).

On the basis that a sailor always learns from mistakes, over that series and the following spring and summer, they managed a very steep learning curve, culminating in the 2009 Portsea Cup.

For obvious reasons, our performance-based handicap favoured us, but the ‘new’ Barracouta missed taking away the Victorian Couta Boat Association’s ‘Auld Mug’ by just two seconds. That was as good as it got.

For the following six or so years, Martin and his crew raced Barracouta in the SSCBC fleet, with varying success, finding competition amongst a group of ‘performance peers’ and continuing to learn how to sail her. Martin reflects:

She is not a light boat, so she is not highly competitive in less than about 13 knots. And she is a little deeper in the bow and forefoot than boats ‘just off the assembly line’ today. But those characteristics mean that, given a rock-hard forestay and flat angle of attack on the headsail, she will sail as high or higher than anything else around. And in a stiff breeze, she settles into a groove and ‘goes’. Interestingly, her mass also means she can be quite competitive in very light, variable and flat conditions, where she is able to store the energy from puffs of wind and carry forward, when other boats might slow.

Barracouta’s success in the SSCBC fleet came to a close when she was sold to a Sydney syndicate in 2015. It’s a tribute to C77’s innate authenticity that she has shaken off 30 years, and again entered the NSW fleet as a ‘new’ boat; once again called Makama.

Custodian: Fredrik Blenke; 2019 – Present
In 2019, custodianship of Makama was transferred to Fredrik Blencke. The purchase of Eloise and Makama, both based at RPEYC, was supported by the Club to increase the amount of sailing and provide a boat suited to its ageing demographic. From these two Couta Boats in 2015, by 2020 there were six Couta Boats moored off the Club and the number of active sailing members of the Club almost doubled.

Makama has raced in many of the Sydney Couta Boat races, including RPEYC Sunday series and the annual Thistle Cup. She has also sailed to Pittwater to join with their Couta Boat fleet for the Wattle Cup Regattas, RMYC Classics Regatta, NSW Couta Boat Championships and the Couta Boat Nationals in 2017. With Freddie Blencke at the helm, she won the Thistle Cup in October 2017 and the Sydney Harbour Couta Series in 2018.