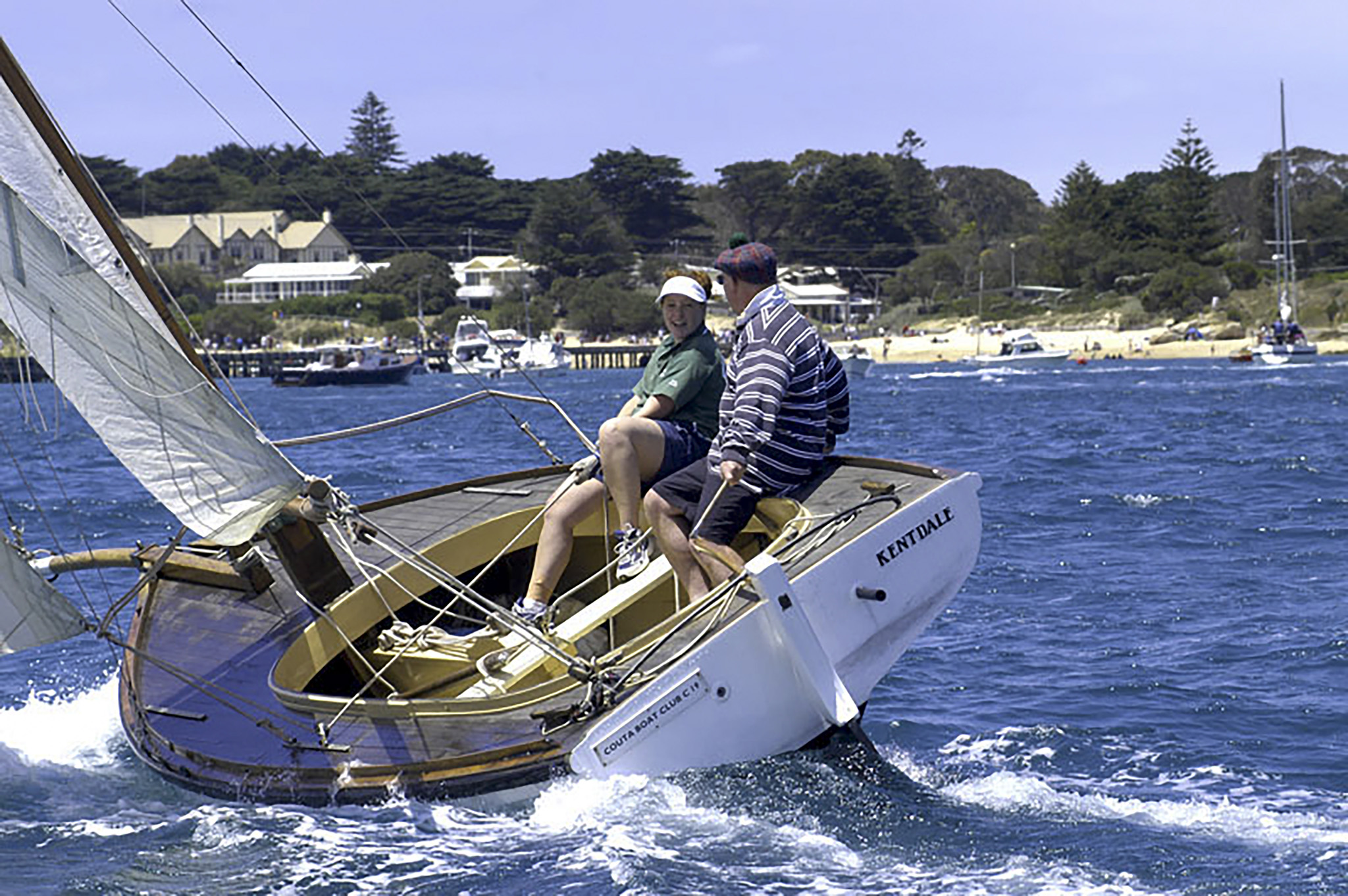 Custodian: Frank Ferrier; 1942 – Unknown
Kentdale was built by Peter Locke at Queenscliff, Victoria, in 1942 for Queenscliff fisherman Frank Ferrier. She was constructed as a clinker fishing vessel. The smaller boats crafted by Peter Locke in this era were built principally for commercial fishing along the south-west coast of Victoria. Between 1932 and 1952, Frank Ferrier commercially fished out of Apollo Bay located on the south-west coast of Victoria, so it is likely that the now named Kentdale was in his possession from 1942 onwards, fishing for ‘couta, flathead and crayfish.

Oral folklore reports that at some stage the boat was owned by Peter Grant Hay, the founder of Carlton United Brewery, which produced a ‘Kentdale’ beer, and that Kentdale was aptly named after this brand. However, there are no written records to verify this claim.

It was not until the 1970s that Kentdale’s location was known. Tim Phillips, from the Wooden Boat Shop (WBS), Sorrento, first sighted her behind the breakwater in St Kilda and badly in need of repair. This suggests that over the years, the northern end of Port Phillip might have been familiar waters for the boat.

Custodian: M Cahill; Unknown – 1982
Custodian: Jill Hartley; 1982 – 1985
In March 1982, Jill Hartley purchased Kentdale from M Cahill. She was on a mooring at Williamstown, which was also included in the sale. After the purchase, the boat was fully restored at C Blunt Boatyard in Williamstown, Melbourne.

Once the restoration was finished, the first Couta Boat race Kentdale entered was the 1983 Gaff Boat and Fishing Boat regatta sailed in Hobsons Bay, Williamstown. Jill recalls the event being a lot of fun, both on the water and onshore. The race was conducted in a decent south-west sea breeze and waves built up from a good fetch. Bob Blunt and others manned a launch and stationed themselves at the finish line. They had a BBQ going and as boats finished, they flung cooked chicken drumsticks at the crews – a few landed on target, a few in the briny and unfortunately for some, a few on their mainsails!

Following the regatta, Kentdale was sailed to Jill’s home base, Portsea, at the southern end of the bay where she was moored off Shelley Beach, Portsea. During the next three years, Kentdale joined the growing fleet of Couta Boats and was regularly sailed by Jill in races organised by the newly formed Couta Boat Club. However, in that time Kentdale was subject to a violent storm.

One exceptional westerly blow in March 1984 resulted in Kentdale being swamped on her mooring. Thought lost for good, it wasn’t until she was spotted from a light plane laying on the bottom of the bay but still attached to her mooring, that an attempt was made to salvage her. She was repaired by Mullies Marine Services and the WBS.

Custodian: Bruce Bell; 1985 – Unknown
In 1985, Kentdale then passed into the custodianship of Bruce Bell, who sailed her in the Couta Boat fleet at Sorrento, Victoria.

Around 2000, Bruce sailed Kentdale in the Portsea Cup. However, he sailed her ‘under’ just as she was sailing through the finish line. Fortuitously, she was quickly rescued by Tim Phillips and Will Baillieu who witnessed the dramatic sinking. Tim used a grappling hook in 60 foot of water and hooked her up on the jibboom. He then used a ‘tinnie’ to tow Kentdale back to the beach off Portsea where they bailed her out and returned her to her mooring. All this drama supposedly unfolded in a period of about 40 minutes. Bruce and his crew were quickly rescued by Will Baillieu.

Kentdale enjoyed success in competitive racing in the Couta Boat fleet. In 2002, she won 1st Handicap, Division 2 in the prestigious Portsea Cup. Then in 2005, Kentdale was taken by Bruce to the Wooden Boat Festival in Hobart for the on-water festivities.

For some years, Kentdale was moored on the Gippsland Lakes in south-east Victoria, but her specific location in this period has not been identified. Presumably, she was utilised for fishing and possibly for recreational sailing.

Now in 2021 Kentdale is in the WBS yard at Sorrento where Geoff intends to undertake extensive repairs and restoration.