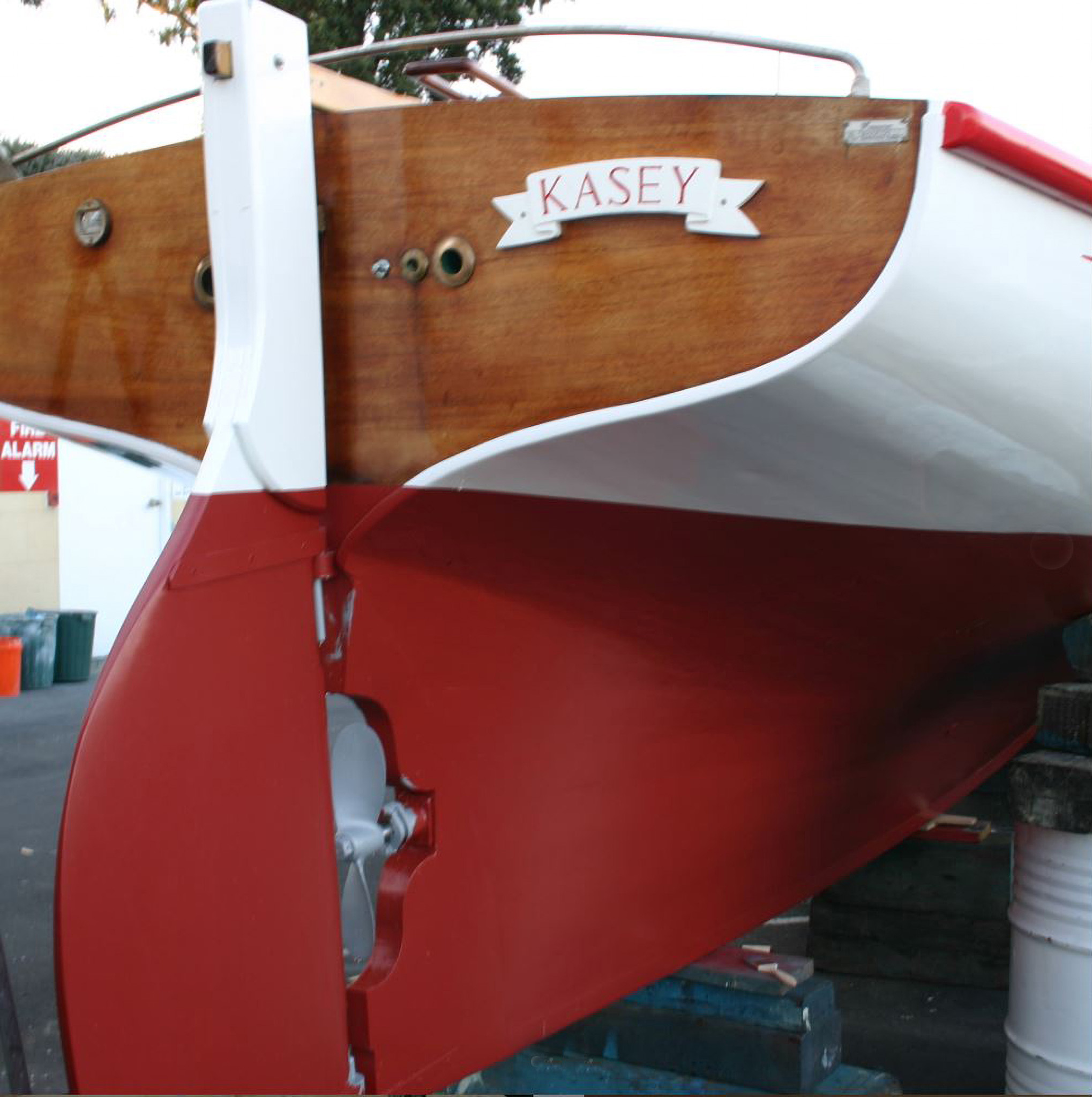 Custodian: Mick Reilly; 1983 – 1995
Kasey was designed by Ken Lacco of Rosebud and built by Mick Reilly in Laverton, Melbourne over a period of nine years during the 1980s. Mick had gone to Ken Lacco for a set of plans. Ken drew up the plans for the boat, similar to the design of Kate C305.

During the build, Mick and his son Andrew were fortunate to have Harry Clark, the traditional wooden boatbuilder from Williamstown, to oversee the laying down of the keel, planking and ribs. For Mick, the build was a great learning experience, as prior to this he had very little knowledge of boat building. On completion, the boat was named after Mick’s daughter, Kasey.

Kasey sailed out of Hobsons Bay and Sorrento on Port Phillip, and the family enjoyed many happy days in her before she left for the west.

Custodian: Kane Williamson; 1995 – 2006
In 1995, Kasey was sold to Kane Williamson in Western Australia. Kane owned Mercedes and was having her restored at the Wooden Boat Shop, Sorrento. He wanted to add to the growing number of Couta Boats in WA.

He saw Kasey in the water at St Kilda Jetty. In September 1995 Kane purchased her and trucked back to Royal Perth Yacht Club. She competed in the Cockburn Sound Christmas Regatta that year and won Division III.

Custodians: Julian Walter; 1996 – 2006
By September 1996, Mercedes was ready to be launched, so Kasey was sold to Julian Walter in December, 1996 and penned at Royal Freshwater Bay Yacht Club where she has remained.

Over the years, the custodians have come from varying backgrounds: corporate manager, farmer, school principal, teacher, financial advisor, software tutor, ex-shipwright and a gastroenterologist. Notwithstanding, sailing on Kasey was always a level playing field! The most colourful introduction was when Julian Walter sold his Halverson and advised the broker that instead of paying a commission, he would offer a share in Kasey.

Martin Jurat arrived one Saturday as Kasey was heading out to race and introduced himself as the new co-owner of Kasey, much to the bemusement of himself and the other unsuspecting owners. However, Martin, having served his apprenticeship under Steve Ward during the period of Australia II being built in WA, was soon in sawdust up to his elbows as he, Peter Ferry and the other co-owners stripped Kasey back to bare timber and refurbished her totally in 2010.

In March of 2015, Kasey followed the path of other unfortunate Couta Boats by capsizing and sinking in 10 metres of the Swan River, Perth not far from the clubhouse. The mast was just protruding above the water and sitting in the middle of the channel, the main thoroughfare between Perth and Fremantle, so it was deemed necessary to tow her underwater to the side of the channel. After several attempts at free diving, a tow rope was secured to the bow and a slow tow commenced, unfortunately resulting in her mast breaking before the tow was completed. However, by Sunday morning she was back in the pen and two weeks later, racing once again, not missing a race as the weekend in between was a long weekend with no Club racing!

Aside from the custodians, the crew deserve recognition for their contribution to not only race day but during the off season when wooden boats demand so much ongoing maintenance. Kasey has always enjoyed tremendous support by crew on race day and appreciated their volunteered time to assist with maintenance when required.

Such is the love and passion for wooden boats!