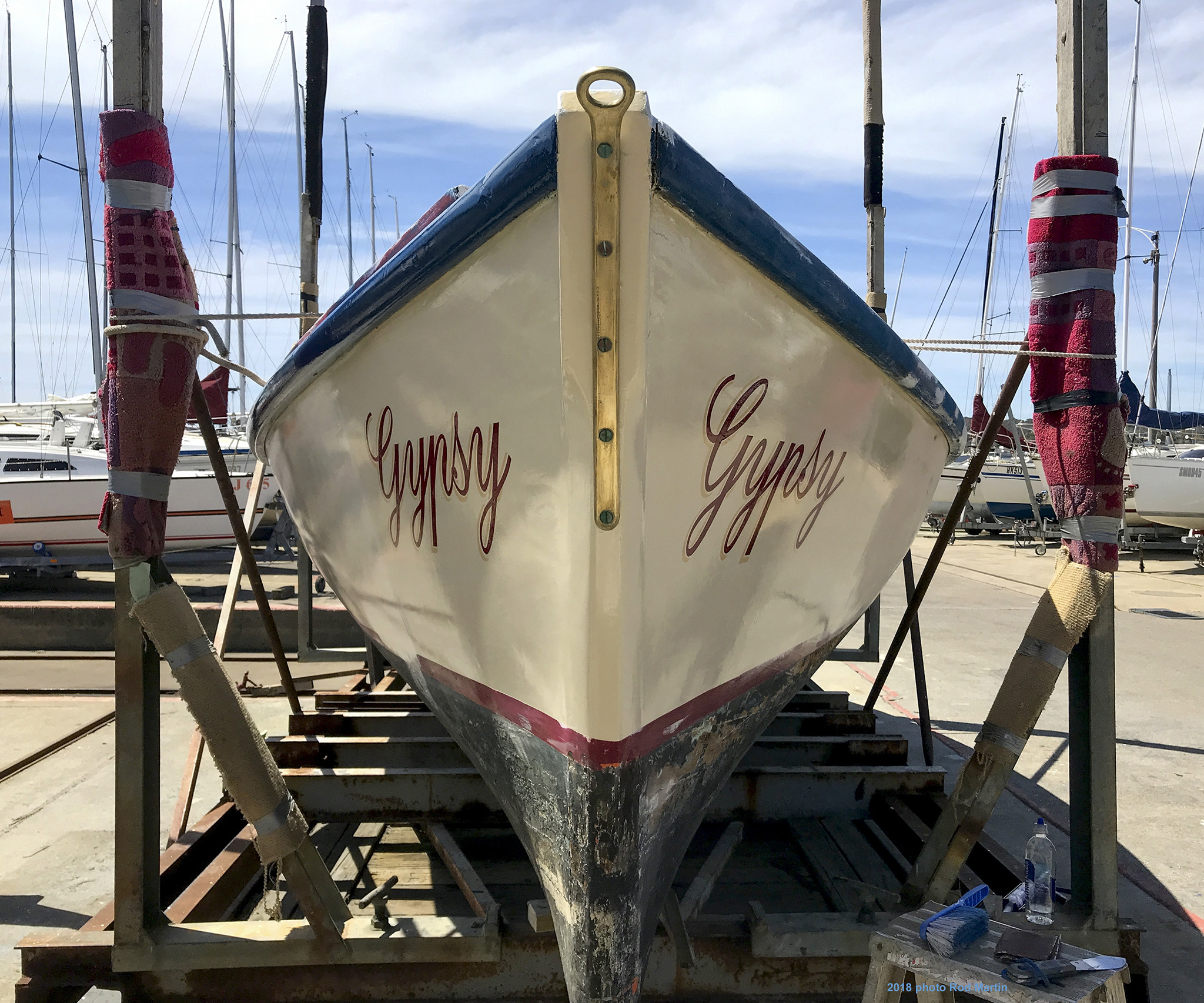 Custodian: Dick Jenkins; Early 1964 – 2004
The 26 foot Gypsy was the second last double-ended net boat built for fishing on Port Phillip. She was built in 1964 for fisherman Dick Jenkins from Port Melbourne. The builder was Keith Payne of Dandenong in outer Melbourne who worked in partnership with Kevin Ball.

When Dick Jenkins who was looking to replace his fishing boat at the time, he heeded the advice of Port Melbourne fisherman Dugga Beazley and commissioned the partners, Keith and Kevin to build Gypsy. It took a few attempts to produce a model that would satisfy Dick’s requirements for a net boat, but the partnership dissolved shortly after the planking had been fitted.

Gypsy was finished by Keith Payne while Kevin Ball constructed the double-ended Margaret that had been commissioned by Dugga Beazley.

Gypsy was launched at Port Melbourne in 1962 and over the next 40 years she was used by Dick Jenkins for net fishing across the northern end of Port Phillip. After some years at Port Melbourne, Dick fished out of Gypsy from Geelong, located on Corio Bay at the eastern end of Port Phillip, also working Corio Bay and Point Wilson on the shores of the outer harbour of Corio Bay. In about 1974, Dick moved Gypsy to Portarlington, located just south of the entrance to the main shipping channel to Geelong. Portarlington became Gypsy’s base and the base for the Jenkins’ fishing business.

For the next 30 years, Gypsy worked out of Portarlington net fishing, catching mainly whiting and snapper. The catch was sold to the public from the Jenkins’ house. However, Dugga Beazley tells that, from time to time, he would receive a phone call from Dick Jenkins to come to Portarlington and transport up to 15 boxes of snapper to the Melbourne markets.

In the early 2000s, when changes began to occur in the fishing industry and the more efficient aluminium boats were widely used for fishing, because of their speed and carrying capacity, the Jenkins family realized it was time to sell Gypsy.

Richard was a frequent visitor to Portarlington and noticed the boat for sale in the Harbour; after some negotiation, he purchased her. Then with a mate, he set out with Gypsy motoring across Port Phillip to Port Melbourne, relying on an old Lister engine that spluttered along. In the middle of the bay, in a rough southerly wind, the rudder came loose and fell off. His mate dived overboard and fortunately recovered the errant appendage, securing it with some sturdy rope so that they could make it to shore.

But this was not the end of Gypsy’s close encounter with misfortune. She was placed on a mooring in Williamstown, across the Yarra River, Melbourne and the entrance from Port Melbourne, where she began to sink. The next morning Dugga Beazley pulled her out of the water and advised Richard that due to her leaks, she was in need of some repairs, to which Richard exclaimed that he didn’t have the money at the time. Richard has never forgotten Dugga’s generosity when Dugga stated:

Don’t worry about it. I’m going to fix her and you can pay me later.

The old Lister engine was suffering from a history of dirty fuel from its beer barrel fuel tank. After her post restoration launch, Richard and friend Peter Costolloe, taking advantage of the very early morning calm, set out to motor her from the St. Kilda Marina to her swing mooring in the Royal Melbourne Yacht Squadron Marina. Sure enough, half way across open water the engine started showing signs of fuel delivery problems. After whipping off the engine side covers to access the high pressure manual fuel feed pump, she gasped her way into her berth.

Dugga found a reconditioned engine to install in Gypsy. Again, the arrangement was for Richard to pay for the cost when he was able.

Over the next few months, Dugga and his son David carried out the repairs: they replanked her from the waterline up, replaced the rotted deck and coamings, and inserted a new stern post. Gypsy was painted in the ‘Beazley green’ colour and when back in the water, she was moored amongst Dugga’s ‘green’ fleet besides St Kilda Pier.

Richard used Gypsy as a recreational boat, but as he was already committed to competition sailing in his keel boat and also his Tumlaren, he could not find the time to fully utilize Gypsy. Eventually, he sold her.

Custodian: Robert Barr; 2010 – 2014
Gypsy was sold to Robert Barr from Mornington at the eastern end of Port Phillip who, from first sighting, admired her lines.

Gypsy has a beautiful sweep up to the bow and is quite beamish.

After the purchase, Robert secured a berth on the Fishermans Jetty at Mornington Pier for Gypsy and used her for recreational fishing, and for pleasure motoring with his family on the bay, motoring as far as St Kilda.

As Gypsy was in good condition when Robert purchased her, he carried out general maintenance only, replacing some floorboards and painting the hull.

In 2014, Robert sold Gypsy to another Mornington local, Robert Warden.

Custodian: Robert (Robi) Warden; 2014 – Present
After Robi Warden purchased Gypsy, he kept her in her berth at Fishermans Jetty at Mornington Pier.

To give her heritage appeal, Robi has painted her in the heritage colours of cream hull with burgundy and royal blue trim.

Robi reports that recently, during a raging storm, Gypsy’s rudder was sent airborne then disappeared into the harbour. Through perseverance and part fluke, Robi found it on the seabed and retrieved it, then set about to return it to Gypsy’s stern.

During a recent maintenance when he replaced some of the rear decking, Robi discovered that under the deck timbers, the sub deck ply was inscribed:

This boat was restored by David and Dugga Beazley in 2004. It was built for Dick Jenkins at Dandenong in 1964 and is now owned by a mad Irishman Richard.

The Beazley boys wrote their legacy into Gypsy’s history.