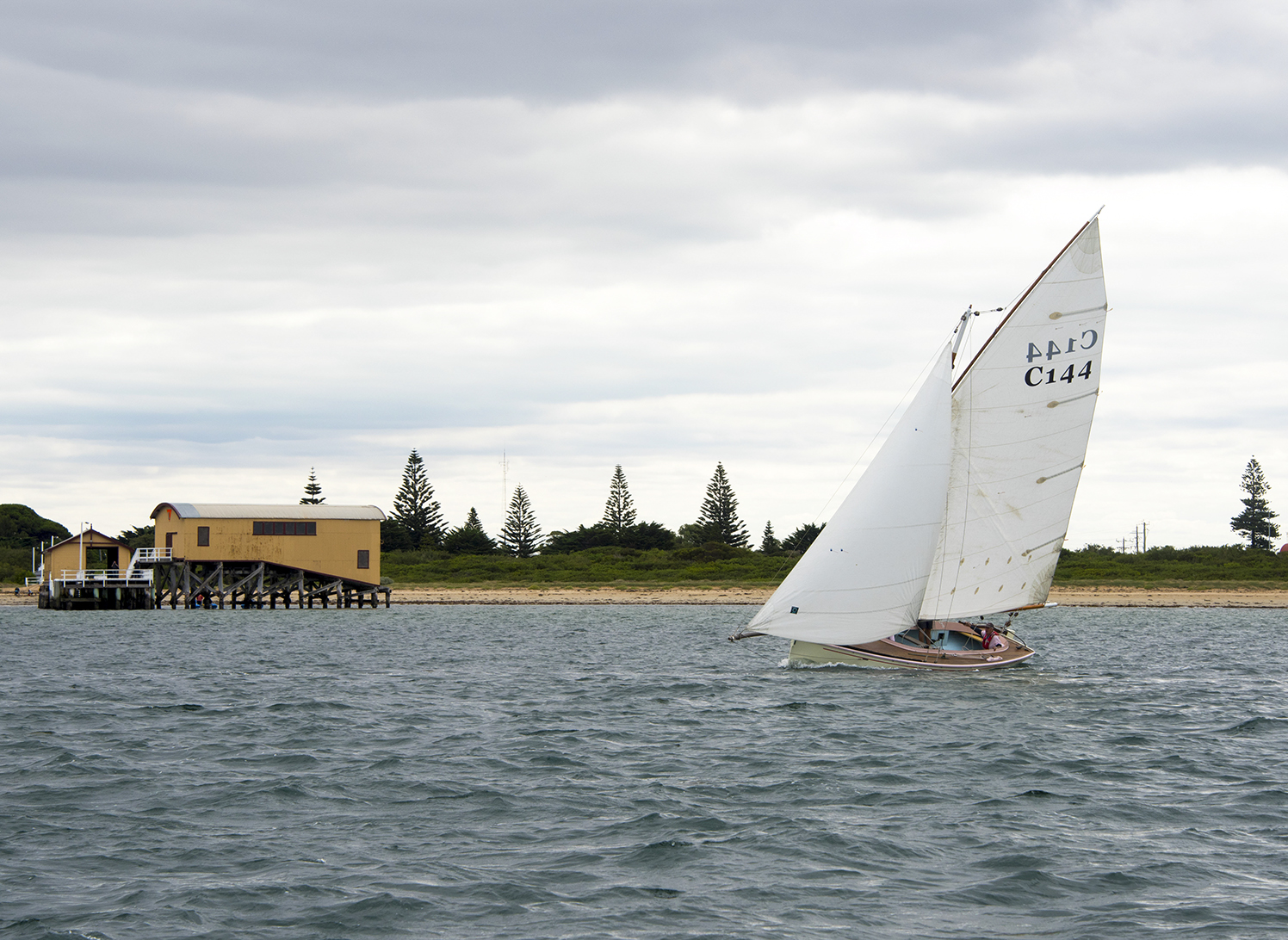 Custodian: Cyril Watson; 1927
Fancy was built by Mitch Lacco for fisherman Cyril Watson in Queenscliff in 1927. She was built at 24 foot 3 inches, but with a slightly lower freeboard for a Couta Boat of this size.

Cyril commissioned Mitch Lacco to build the boat to compete in the Williamstown to Portarlington race in that year. It was common practice for the Queenscliff fishermen to compete in regattas at various locations around Port Phillip, and although there are no written records of this particular race at hand, it is understood that Fancy took out the honours. Queenscliff identity Jack Beazley tells that Cyril’s intention was to beat Jack’s grandfather Walter Todd in the regattas.

Fancy was used by Cyril for fishing out of Queenscliff for the next 10 years. E T Raison documents that Fancy was the first vessel to sail in and out of the Queenscliff Cut, a man-made channel connecting Swan Bay with Port Phillip, after it was completed in 1936. This claim, however, is disputed by some Queenscliff locals who declare that she was eclipsed by one of the local boys who sculled through the Cut in a dinghy, to take the honours.

Custodian: Mr Burrows; late 1930s – 1950s
In the late 1930s, after more than 10 years of fishing, Fancy ran aground in The Cut at Queenscliff and her side broke up. She was acquired by fisherman Burrows who moved her to Geelong where extensive repairs were undertaken in the Western Beach Boat Club; the side wall of the building had to be removed to fit her inside for the operation.

Mr Burrows was the custodian of Fancy for the next 15 years, and used her for recreational fishing.

Custodian: Alan Jose; 1950s – early 2000s
In the late 1950s, Fancy was purchased by Alan Jose of Geelong who was a keen recreational fisherman and used Fancy to conduct weekend Charter fishing trips in Corio Bay; whiting and snapper were the common catch.

Later, Alan decided to return Fancy to Queenscliff so he could do some ‘couta fishing in the local waters and seek the whiting fishing grounds along Point Lonsdale. During her sojourn in Queenscliff she was moored in The Cut.

Eventually, Alan returned Fancy to her Western Beach mooring and used her for recreational fishing. But there came a time when the boat was too much for Alan to handle, so his son Max took over the maintenance and used her for some recreational fishing. In all this time Fancy was not rigged, and relied on her engine for power. Max installed a new diesel motor and fitted a mast and jibboom, but he sold her before she was fully rigged.

Custodian: Paul van Prooyen; early 2000s – 2016
Whilst on her mooring at Western Beach, Fancy was frequently admired by local Geelong resident Paul van Prooyen who was attracted to her wineglass – shaped stern. In a timely moment in the early 2000s, Paul negotiated to buy Fancy when he heard that her owner was moving interstate.

Fancy remained moored at Western Beach and her new custodian used her for recreational sailing and the occasional race out of Royal Geelong Yacht Club (RGYC). But a temporary move to a new club mooring resulted in her jibboom becoming entangled in the self-steering of a neighbouring boat. By morning, the jibboom had snapped, the mast also snapped, and the hull was stressed and taking on water. Paul was left with the decision to write her off or undertake extensive repairs; he chose the latter course to preserve her heritage.

Queenscliff boatbuilder Brett Almond undertook the restoration. Brett reports that the hull was broke and all bent in, and leaking like a sieve, so moulds had to be made for the outside of the hull, in order to push her back into shape. Some new planks and ribs were fitted and a new centre-case was installed. Brett claimed that she had the biggest keel of any Couta Boat and was relieved to see that it was intact.

After the restoration, Fancy was moored in Queenscliff and joined the local Couta Boat fleet sailing out of the Queenscliff Lonsdale Yacht Club (QLYC), where she was a regular competitor for the next 10 years. In this time she also attended the annual KPMG regatta day at Sorrento Sailing Couta Boat Club. With other QLYC Couta Boats, she participated in the biennial Geelong Wooden Boat Festival, especially enjoying the Passage race from Portarlington to Geelong.

Custodian: Scott Taylor; 2016 – 2021
In 2016, Fancy was sold to Scott Taylor who purchased her principally to teach his young boys to sail a traditional boat without a reliance on electronic equipment. The additional attraction was that she could be sailed single-handed by Scott; he could also race her with his boys and go fishing in her.

Scott and his sons raced Fancy with the local Couta Boat fleet from QLYC for a season, with old sails. For their first race, Scott seconded experienced sailor and owner of Nellie C148 Russ Watson to work the sails in a 25 knot wind, ensuring victory for Fancy. This victory was the impetus for Scott and his boys to race Fancy every Saturday in the local fleet. In addition, they used her regularly for fishing, venturing out to as far as Mud Island, catching flathead.

After the success of the sailing season, Fancy went to Cayzers boatyard for an overhaul. She was stripped to her bare hull and re-painted. A new shaft, coupling and rudder were fitted, along with new rigging, and a new suit of sails from Col Anderson.

In 2018, Scott moved Fancy to Geelong where he raced her out of RGYC every Wednesday evening. As a requirement for entry she had to be fitted with navigation lights; as she was the only entry in her Division, she was always guaranteed to be first over the line. She also competed in the Portarlington to Geelong Passage Race as part of the 2018 Geelong Wooden Boat Festival, winning Line Honours for her Division, and 2nd on Handicap, having been eclipsed by Nellie C148.

After the few years of enjoying the challenges of sailing a heritage Couta Boat, Scott desired to return to single-handed cruising beyond Port Phillip. So Fancy was sold in early 2021.

Custodian: Richard Wagstaff; 2021- Present
Fancy’s new Custodian was Richard Wagstaff. Richard first came across Couta Boats in his early twenties, when holidaying at Newhaven on Phillip Island. The holiday house backed on to Ken Lacco’s property and, periodically, Richard and his mate would jump the fence to check out Ken plying his skills boat building. In Richard’s words:

I was fascinated and the seed was sown, I think.

But Richard had to wait for another 25 years or so before he could begin to fulfil a goal to own a Couta Boat. During that time he owned fibreglass boats in which his nautical skills were honed through regular cruising sailing around the UK and Norway. A while after their return to Australia in 2015, Richard and his wife Anne planned a retirement move to Warneet at the northern end of Western Port in Victoria; the tidal estuary there was reminiscent of Cornwall where he spent many days pottering about in boats as a child. The purchase of a heritage Couta Boat was a fitting acquisition for some regular recreational sailing and fishing.

Fancy was purchased by Richard early in 2021 shortly after he was invited by Scott for a sail; he loved the experience. He then moved her to a berth at Royal Melbourne Yacht Squadron (RMYS), on the arm of the pier where Dugga Beazley walks to his boats. And, regularly, Dugga offers Richard a few pearls of wisdom about sailing and maintaining a Couta Boat.

Fancy is sailed by Richard and Anne, and son Harry. They use her for weekly recreational sailing out of RMYS, sometimes venturing across the bay to Portarlington and down to Geelong, and plan to compete in the occasional race out of RMYS.

Richard’s ultimate goal was to sail Fancy through The Rip and around to Western Port, which he did in December 2021. For Richard,

It was an awesome sail and I was extremely impressed with how Fancy handled the sea. We felt very safe in what was a lumpy sea with descent swell.

Fancy is now moored in the sheltered tidal estuary at Warneet where Richard sees her every day and sails her weekly.

In February 2022, Fancy competed in the Warneet Motor Yacht Club ’round French Island race, along with an array of small yachts and multihulls; Fancy came home middle of the fleet.

I am not sure if they knew how to handicap us. Were we a keel boat or a lifting keel? It was a fantastic sail and, I think from comments, they really appreciated having a classic boat in amongst the fleet. She seems very comfortable here.