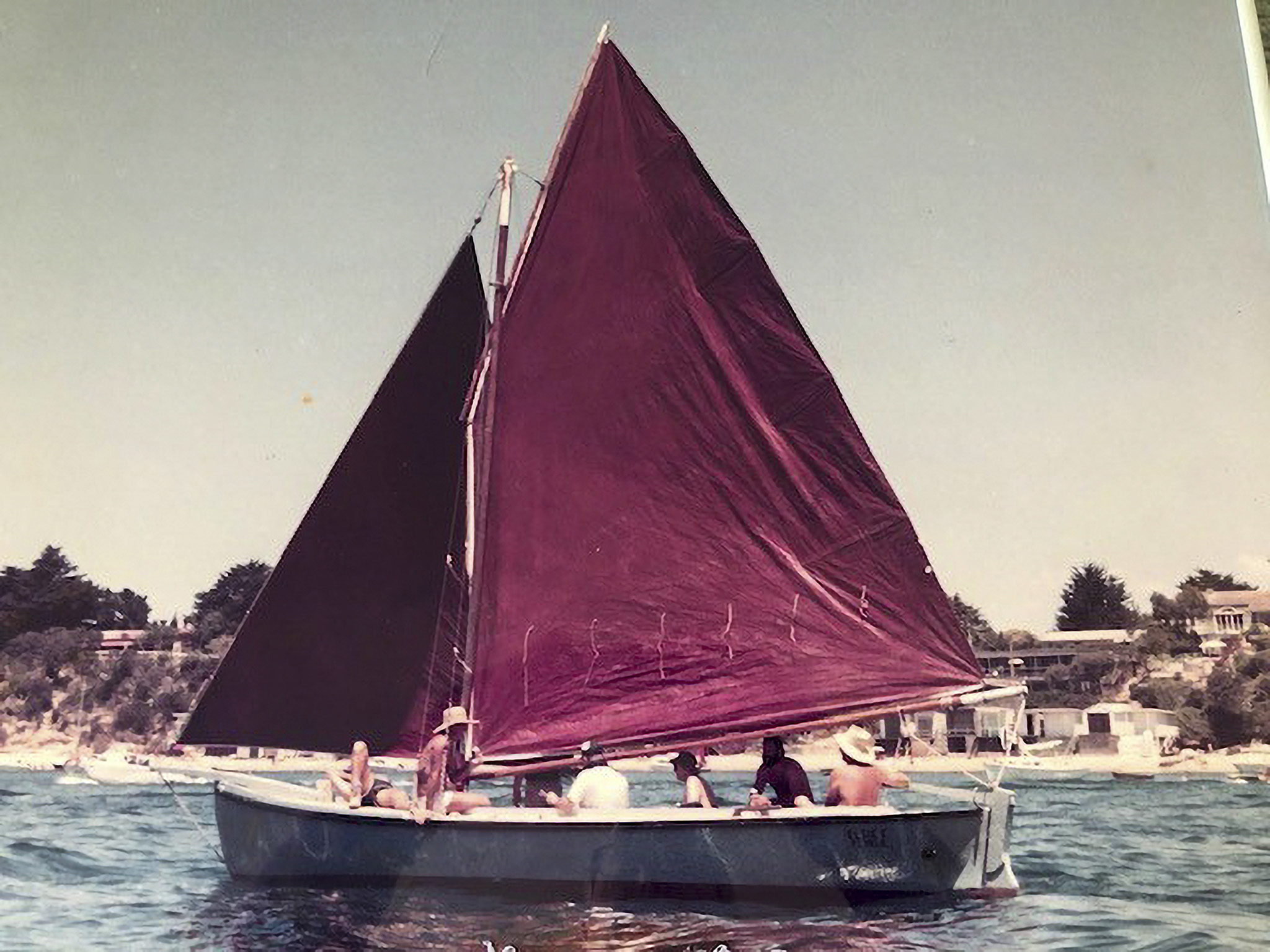 Custodians: Wilson Brothers; 1932 – Unknown
Elsie E, formerly Faye, was built by Peter Locke in Queenscliff, Victoria in 1932 for the Wilson Brothers of Portarlington on the Bellarine Peninsula of Victoria. She was built as a unique, double-ender netting boat, and was used as a commercial fishing vessel around the Bellarine Peninsula and the northern Mud Island area of the southern waters of Port Phillip. She originally had a lug rig, is 28 foot long, drew 18 inches, had a 5 foot centre-plate and was fitted with burgundy sails.

Custodian: Mike Kent; Unknown
Sometime later, Faye passed into the custodianship of Mick Kent, another Portarlington commercial fisherman and his two sons, Denis and Brian, and was used as a fishing vessel for some years.

There was a good working relationship between the commercial fishermen on both sides of Port Phillip, Victoria so much so that Mick Kent arranged for Charlie Strong, a boat builder from Port Melbourne at the northern end of the bay, who at the time was building 18’ plywood net dinghies, to build him one in exchange for Faye.

Custodian: Charlie Strong; Unknown – Mid 1990s
Charlie renamed her Elsie E. After the exchange was completed and Charlie was returning her to St Kilda, he had in his possession a saw and a hammer. He used these tools to pull up the floor, strip down the decking and then he threw the whole lot overboard. By the time he arrived back at St Kilda Pier, Elsie E had been stripped back to bare bones.

Charlie Strong was a local of Port Melbourne living close by in Fishermans Bend and a boat handyman. He was a great bloke who spent a lifetime working in and around the wharfs; a nuggetty bloke…When it came to wooden boats he really had a can-do attitude. Elsie E was the first in a long line of double-enders and Couta Boats that Charlie took on and restored and helped build over a period of 30 years.

After a car accident and the resulting debt, Charlie was forced to put Elsie E up for sale. The first thing Dugga Beazley knew about it was seeing a For Sale sign on the boat. It was too late – she had been sold. Charlie sat with Dugga on the beach and watched her sail away, off to compete in the Portsea Cup. Charlie tearfully said to Dugga,

That should have been me taking her to Portsea.

Custodian: Harley Moffatt; Late 1980s – Early 2000s
Harley Moffatt became her next custodian in the late 1980s and gave her a full refit at the Wooden Boat Shop (WBS), converting her to a gaff rig with jibboom and a more traditional sail area. These modifications gave her improved racing performance. She was raced regularly by Harley with crew David Hendy and Andrew Skinner, with good results. In 2006, she won 1st Handicap, Division 2 in the CBA Portsea Cup. Earlier, in 2001, she had been declared 3rd Handicap in Division 1 in the Portsea Cup, with a controversial result, considered a lost win. Also, to her credit, she was successful in the South Channel Race and Australian Championships.

She broke three masts and was once salvaged having sunk on her mooring. Elsie E became stuck on rocks near Port Phillip Heads on New Year’s Eve one year at 5pm with Harley, his wife Annie, and then two year old Charlotte on board. It was quite stressful but they successfully refloated with no damage and no divorce! Also, Elsie E was almost run over by a cargo ship in the South Channel when the crank start on her Lister diesel failed to engage resulting later on with a new engine, which made Tim Phillips of the Wooden Boat Shop very happy. Harley says:

In summary, Elsie E was a wonderful boat that gave much pleasure to my family, my crew and our friends who sailed on her over the 20 years I was her custodian.

Harley, with crew Andrew and David, all then went on to sail and own as a syndicate Makama (Barracouta) and then Southerly, after which he was happily pirated into the Kate syndicate.

Custodian: Philip Ross; Circa 2005 – Present
Elsie E went to a good home in Rhyll, Phillip Island, Victoria and is now, in 2021, owned by Philip Ross. With growing twin boys, the Ross family primarily use her for family fishing outings, with many happy days spent out on Western Port in Victoria.

Being of shallow draft she is ideally suited to the local conditions. Once, after breaking a mooring chain in a storm, she was refloated with help from local wooden boat historian and enthusiast John Jansson.

Every two years she is brought back to the WBS for essential maintenance and Tim Phillips generally calls Harley so he can cast an eye over his beloved old boat that changed his life and that of his family, so much so.