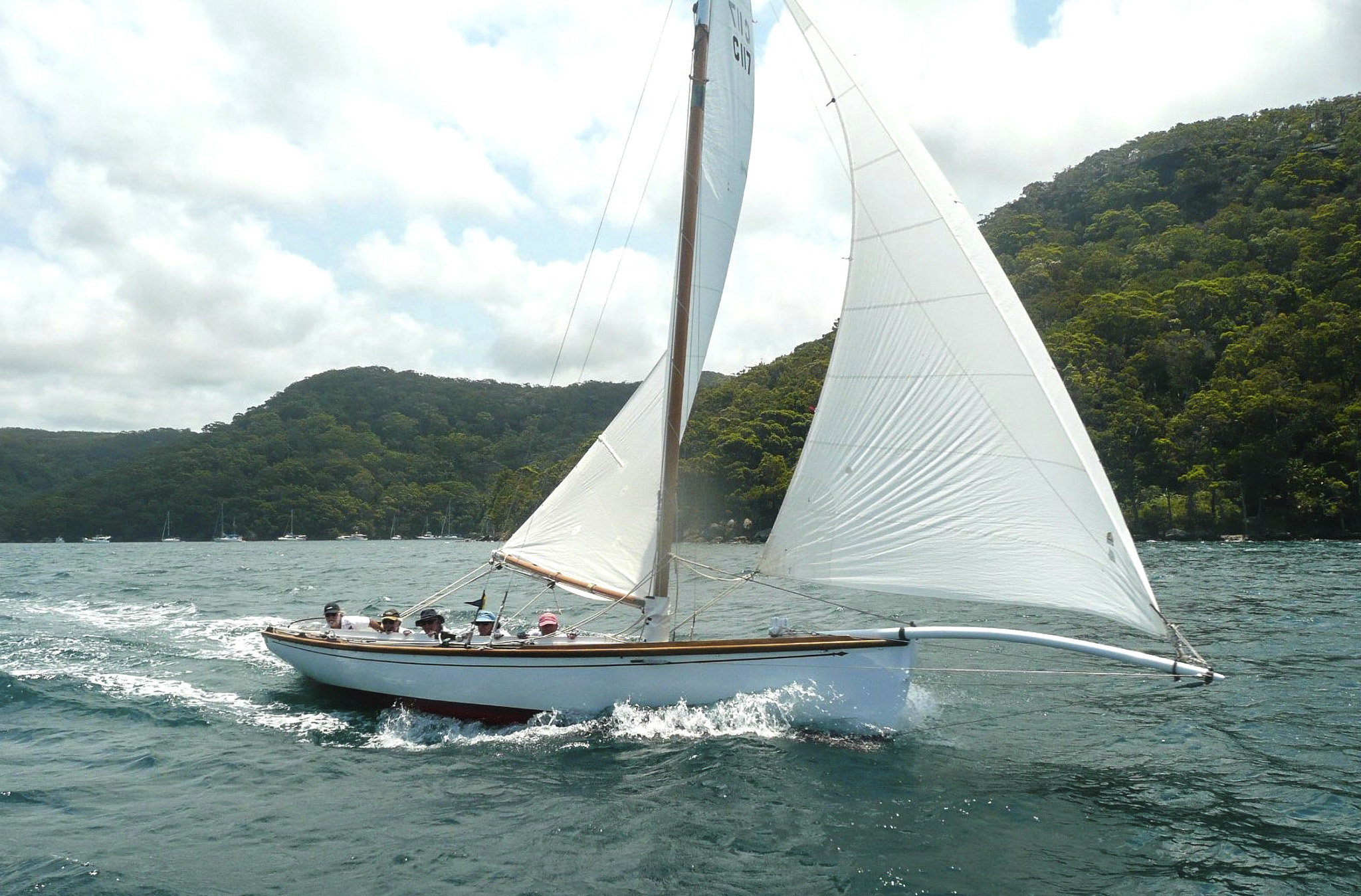 Custodian: Mick Morris; 1999 – 2012
Commissioned by Mick Morris in 1999, Cariad was built at the Wooden Boat Shop (WBS) in Sorrento, Victoria. She was designed from the lines of Patsy and built at the same time as Mary Bell and Sorrento and is a classic Division 1 boat of 26 foot 6 inches in length.

Prior to her commissioning, Mick met up with Philip Kinsella, a Royal Prince Alfred Yacht Club (RPAYC) member and owner of Sylvia whose lines Mick admired. Convinced that he wanted a similar boat, Mick had a series of long conversations with Tim Phillips, resulting in the construction of Cariad.

Mick’s colour preference for the hull was a port wine colour but when he learnt that the colour possibly would generate heat, she was painted white. The first set of sails was non-racing traditional cream, made by Col Anderson then of Doyle Sails, Melbourne.

Cariad was trucked up by road on a low-loader, daylight driving only, from Sorrento in southern Victoria to Pittwater, north of Sydney, NSW a distance of some 1,000 kilometres. She was launched at the Quays Marina on Pittwater on 20th November 2000 and christened with a good bottle of Victorian Pinot Noir, with lead-carrying helped by friends and a few wooden boat owners. Mick named her Cariad: Welsh for sweetheart, in honour of his birthplace.

Finding a crew for Cariad was not a difficult task. At the time of her arrival in Pittwater, Mick had a part-share in an Adams 10.6 yacht that he and others would race at least once a week. Mick and this crew began racing Cariad regularly twice a week between RPAYC Pittwater, Avalon Sailing Club and Woody Point Yacht Club, with the odd sojourn down to Sydney Harbour to the Sydney Amateur Sailing Club (SASC). Their competitors were usually two or three Ranger yachts, as they were the only other gaff-rigged boats about. But Cariad  had proven performance against boats of other classes and size.

For the crew of Cariad there was a bonus. When Mick was overseas for work, for long sojourns, between races his crew had free access to his little renovated fisherman’s hut on Scotland Island in Pittwater!

After a few years of being the only Couta Boat on Pittwater, another Couta Boat built by Tim Phillips, Tenacity, commissioned by Justus Veeneklaas and built in 2004, joined in. And where there are two Couta Boats on the water, there is competition! Cariad and Tenacity competed regularly. At one stage Mick replaced his regular sails with Kevlar, which improved Cariad’s performance until he realised he was contravening the regulations. Mick said:

Tim Phillips didn’t talk to me for a very long time. But all is well now because I changed back to the white traditional racing sails!

After a year or two of competitive racing, Mick was faced with a dilemma. He persuaded Phil Kinsella to sell Sylvia to him, which revved up the competition on Pittwater.

Within a short time, two more Couta Boats arrived on Pittwater, to increase the size of the fleet to five. Mick started to lobby the Wednesday afternoon race committee at RPAYC to let the Couta Boat fleet have its own division and start time for that race. They eventually did and the Division 5 Classic Boats resulted.

Custodians: James George and Mick Morris; 2012 – 2016
In recent years, Mick and his wife Margie decided to spend winters in the tropics of North Queensland so she could write, and then summers in Lovett Bay in Sydney so he could sail. This move prompted Mick to consider finding a partner for Cariad. In August 2012, James George bought a half-share in the boat.

Custodian: James George; 2016 – Present
Four years later, after Mick was diagnosed with a serious health condition, and in August 2016, James then became the sole custodian.

Cariad is now moored in Refuge Cove, Pittwater, NSW. She continues to race regularly with RPAYC on Wednesdays and with Avalon Sailing Club on one Sunday a month, plus specific Couta Boat regattas held on Pittwater.