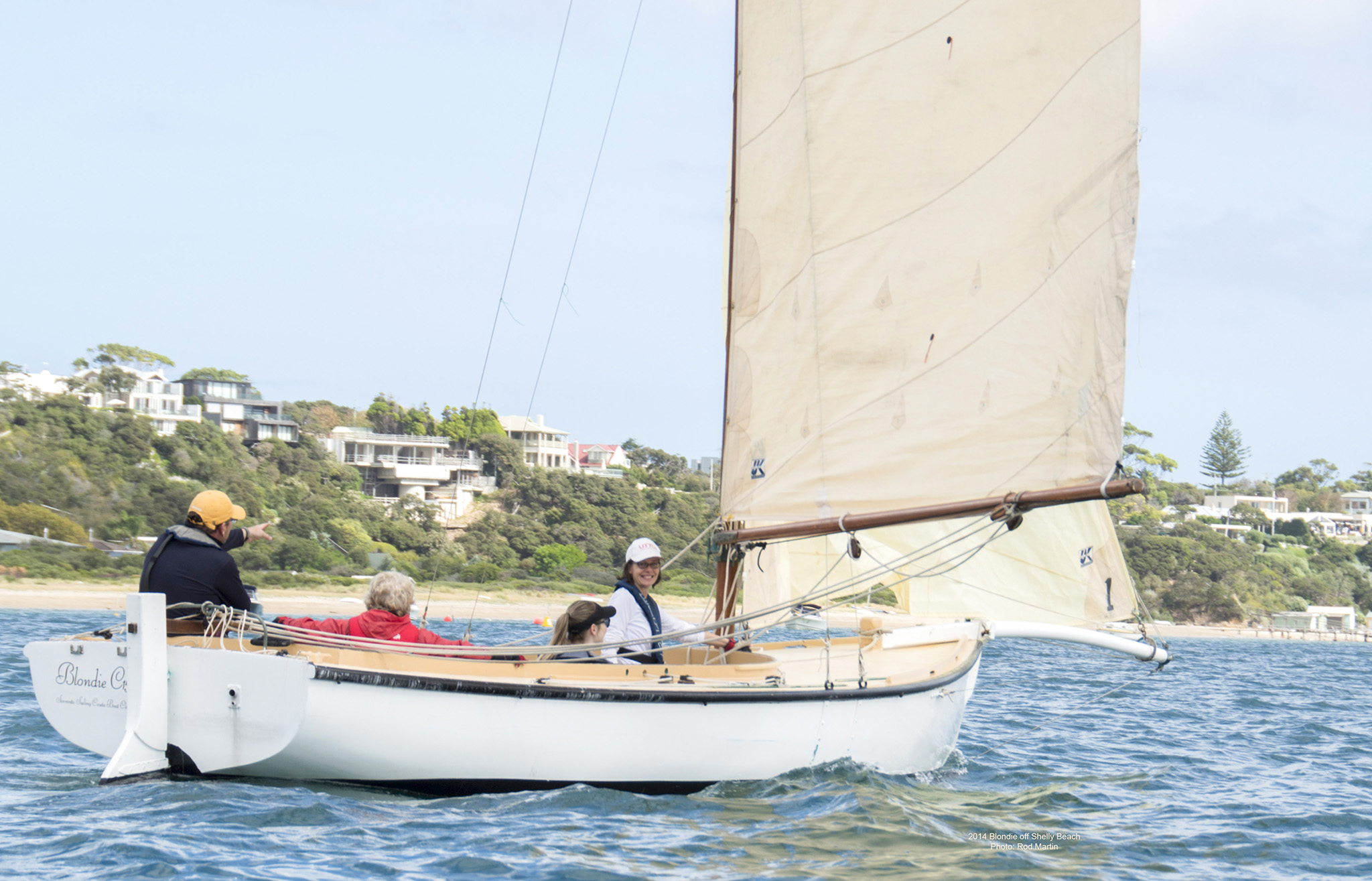 Early Years
Blondie was built by JJ Savage & Sons, at Williamstown, Victoria in 1954. She was initially named Ronrico and was built as a pleasure boat with a cabin, a lead keel and a Bermuda rig.

Custodian: John Taylor; 1950s
Ronrico was once owned by John Taylor, also known as ‘Squizzy’, a Port Phillip sea pilot on the pilot ship, Wyuna. In his time of custodianship, Ronrico was moored at Somerville on Western Port in Victoria. Jack Beazley from Queenscliff carried out some necessary repairs to keep her afloat, including placing plywood patches over some rotten ribs.

Custodian: Tim Phillips; Early 1980s
Custodian: John Harris; 1980s
In the early 1980s, Tim Phillips from Sorrento came across Ronrico on a mooring just off Balnarring Beach in Western Port, Victoria and purchased her for John Harris. Tim converted Ronrico from a Bermuda rig into a gaff rig so she could be sailed competitively in the growing Couta Boat fleet at Portsea and Sorrento at the southern end of Port Phillip.

In 2003, they purchased Ronrico and Karin renamed the boat Blondie.

Karin then spent time overseas, but on her return she spent every weekend sailing Blondie, getting the maximum boat time possible, racing, picnics, just hanging about in boats.

For Karin and Mark, sailing Blondie bonded them immeasurably:

The interesting aspect of our relationship with Blondie was about experiencing the spirit of the sea, the magical power to enjoy nature and to get away from life’s other busyness.

Custodian: Mark Bergin; 2006 – 2017
In 2006, Karin transferred her share in Blondie to Mark, but her affinity with the fleet stayed strong and she took every opportunity when she was in Australia to sail on her.

In this same year, engine problems called for a complete rebuild of Blondie, including the replacement of the crankshaft. During her time on the hard stand at Nepean Boats, two planks were replaced after 50 or so years of good service. The condition appeared to be that the original planks might have been just a little too large and the years of swelling had resulted in bulging planks.

Mark and his crew sailed Blondie with great success in the summer and winter series at SSCBC.

Custodians: David Birkill and Robert Christie; 2017 – Present
Blondie’s on-water success continued after she was purchased in January 2017 by SSCBC members David Birkill and Robert Christie. After selling Salacia, Robert ‘Bear’ Christie was missing the Couta Boat scene, specifically, the on-water action and the camaraderie on the deck. He also indicated his love for Division 2, which was less aggressive and a lot more relaxed racing so they went in search for a Division 2 boat. Blondie was the boat that caught Rob’s interest:

After some negotiations with Mark Bergin and a quick sail, Blondie was ours.

Preparations were undertaken for her first race and her owners were quietly confident, due to a favourable handicap. Blondie’s performance in her first few races is described by Robert as follows:

We had a DNF (did not finish). Not enough power in this little boat to get us over the line in the fading breeze against the tide; we quietly sailed back to the mooring feeling very unsure of the future of Blondie. The next three races we managed to finish with a 4th, 6th and 7th then two more DNFs including in the Portsea Cup. It was doom and gloom! What to do? How to get this little boat moving faster? So we made a list and turned Blondie into a consistent winner.

Blondie went on to blitz the field in a succession of races in the 2019 season, including numerous passage races and back-to-back wins in the re-inaugurated Sorrento Cup and Heritage Cup. However, due to the COVID-19 virus restrictions and the temporary closure of SSCBC in the 2020 season, Blondie did not win a further back-to-back race.

But Blondie was reborn in preparation for the 2021 summer season. Back in the water with a brand new Yanmar motor, a restructured stem and re-caulked planks under the water line, she regularly blitzed the Division 2 fleet in Saturday competition. She won the 2021 Division 2 Club Aggregate Series on Handicap and the Passage Race Series on Handicap.