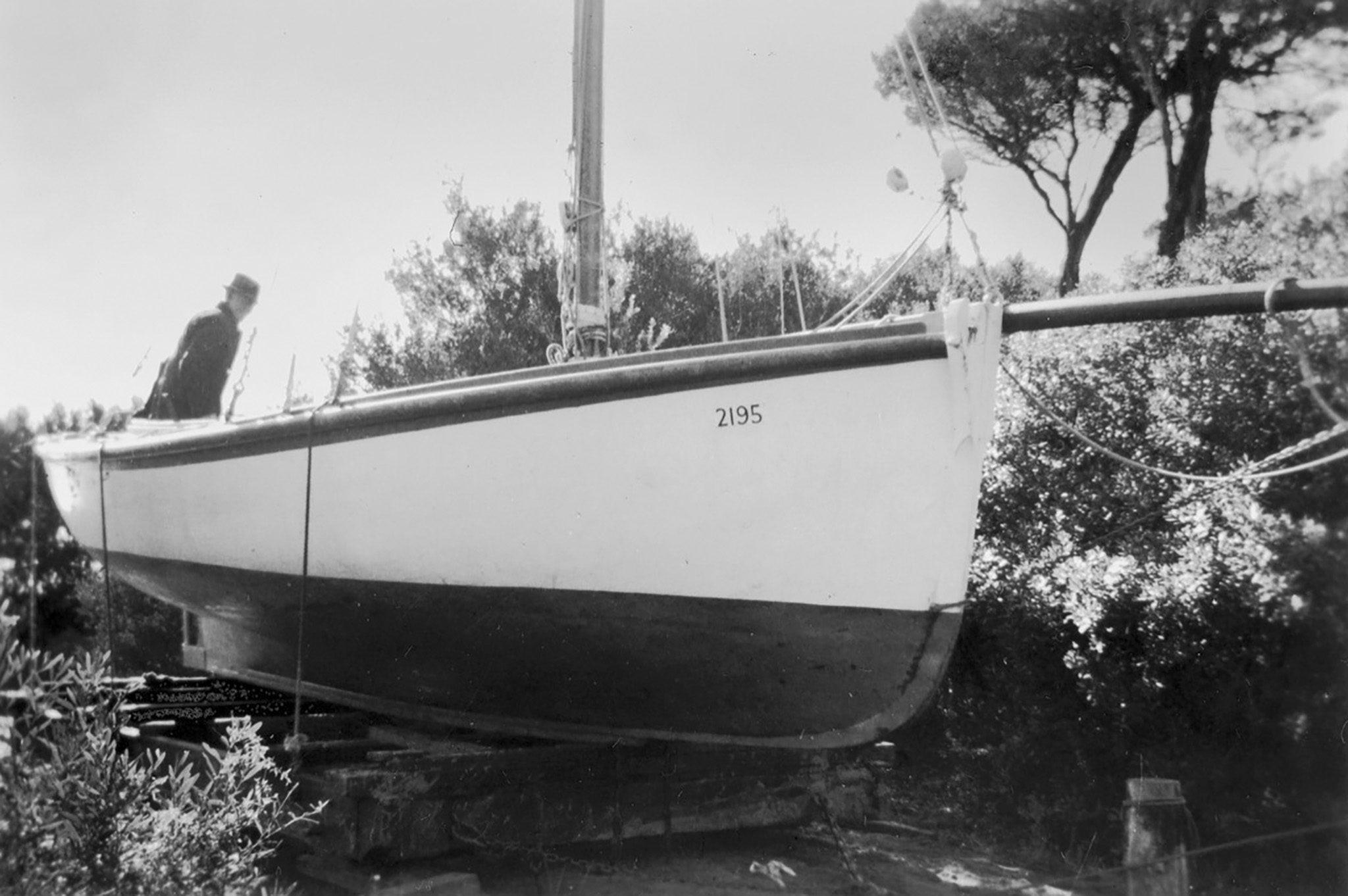 Custodian: Bill Kennon; 1946 – 1954
The 24 foot Amy Christina (Amy) is believed to be the last remaining old Couta Boat in the San Remo area of Phillip Island, Western Port, Victoria. She has been in the vicinity for over 60 years after having been built in 1946 at Rosebud, Victoria by Alec Lacco for Cowes fisherman and boatman Bill Kennon. She was named after Bill’s wife, Amelia Christina Burgess.

Bill Kennon was well known as the custodian of the ketch-rigged passenger and fishing boat Hollydene and also the guest house of the same name. He had Amy built after he sold the ketch Hollydene and used her for cray fishing around Seal Rocks and along the south coast of the island. Bill had also owned the Couta Boats Iverna, Puritan, and Hawk and the ketch Royal.

The hull shape was typical of the later Couta Boats, being fuller aft to fit the engine. She was also fuller forward which allowed her to lift to the seas. Earlier boats often had finer bows and tended to go straight through rough seas. She was a plank higher than most boats for her cray-fishing work, but this did not look out of place with her nice sheer.

Amy was planked with full length New Zealand Kauri and Oregon and decked with Kauri. The Kauri was obtained from Cowes builder Joe Walton who must have had some left over from a boat he built for himself around 1930. The rudder was hung on an outer stern post which was halved onto the keel; the part of the post behind the propeller was cut out in 1960. This sternpost is not typical of Lacco boats.

Being a qualified blacksmith, Bill made all the wrought iron fittings on the boat. He also made a pair of large grappling’s for the boat and used to make his own mooring chain. Most of the fittings and centre-plate were wrought iron as for the 19th century boats. The only fittings not of wrought iron were the bronze chainplates, rudder fittings and stern cleats and the copper bobstay stem fitting. Bronze replaced wrought iron for most fittings on Couta Boats during the 20th century.

The original rig on Amy was probably unique for a Couta Boat and was more 19th century than mid 20th century.

She was gaff cutter rigged with three shrouds each side with spreaders on the mast and a forestay to the stem as well as at the end of the jibboom. Leather bound iron rings held the mainsail to the mast. The mainsail was laced to a batten on the boom and the boom was held up with topping lifts fitted with lazy jacks. When the main was lowered, the gaff and sail were held in place by the topping lifts and lazy jacks, keeping the deck clear for working the cray pots. While not in use the boom was held in place by a boom crutch at the stern.

A single cylinder diesel engine of approximately six horsepower made by Victorian pump manufacturers Kelly and Lewis was installed. On delivery of Amy, Bill pulled her up on the beach not far west of the Cowes Yacht Club and employed Joe Walton to fit extra knees and stringers and a false keel to strengthen her for the rough seas encountered around the island located on the edge of Bass Strait. A removable platform was built covering the forward part of the cockpit.

Bill decided to drop the pots over a shallow reef which was only safe to go over in fine weather. They went out to lift them the next day but a big swell had come up. Bill decided to go in quickly over the reef and tow the pots into the safer deeper water before hauling. All the pots were filled with crays. After they had left, several large waves broke over the reef where they had been. They got away just in time.

On another trip with Bill’s son-in-law Jack Gliddon on board, they were returning from fishing in an increasing south west wind towing a big dinghy loaded with ‘grab all-nets’ and craypots. The ‘grab all-nets’ were made up of two nets, fine and coarse side by side and were used to catch cray bait, apparently catching everything. They were running with the wind and seas and the dinghy kept on surging ahead threatening to smash into Amy’s stern. There was nothing they could do other than let the dinghy go off McHaffies Reef. It was washed up on the reef and was later retrieved requiring three new planks and major restoration. That was Jack’s last trip.

Custodian: Charles Richardson; 1954 – 1959
Bill sold Amy to Charlie Richardson in 1954 and kept fishing despite being in his mid 70s. He kept a dinghy and winch on the ocean beach east of Pyramid Rock. In fine weather he would row out  and set several craypots with the help of Jack Spaven.

Charlie Richardson of Rhyll was working for Len Hegarty and Owen Allen on the Western Port ferries Eagle Star and Estelle Star. When the owners were selling the ferry business to go back fishing at Eden, Charlie decided to buy Amy in case he did not get a job with the new owners. He did keep his job so the Amy spent most of the time on her mud mooring on the east side of Rhyll. Charlie and Harold West used to go out hooking occasionally in her.

Custodian: Ken Wood; 1959 – 1967
In about 1959, Ken Wood bought Amy from Charlie Richardson. Ken used her for fishing parties, oystering and couta-ing. Charlie and Ken occasionally went out oystering working completely under sail. Two dredges were used: one towed from the mast and one from the horse with the boat going sideways with the wind. It is believed that Amy was the last boat in Western Port to go oystering using sail-power only.

After about a year with the Kelly and Lewis motor, Ken bought a more powerful Petter diesel and installed it with the help of Mitch Lacco. The bilge pump had to be relocated to make room for the much larger engine. Mitch also suggested changing the rig to the less complicated lug rig. With his help, the mast was shortened by 18 inches and the cross-trees and jibboom were removed. These were later destroyed in the Richardson’s shed fire along with the fittings. Mitch made a new lug mainsail with sail cloth and bolt-ropes bought from Radins. This was probably the last traditional sail made for a working Couta Boat.

Around 1965, Amy was converted for netting. The centre-case and thwart were removed and the engine was shifted forward. A second-hand Lacco built cabin was bought from Alec Lacco to provide shelter for sleeping on board. The deck was cut out square beneath it to provide more headroom. Other fittings were removed to prevent the nets catching on them.

It was in the time of Ken Wood’s custodianship that Amy probably had her worst trip.

Ken used to go over to Stony Point, Western Port to pick up fishing parties. Leaving for Rhyll at the end of one day he noticed a cloud building up to the south-west. This quickly developed into an estimated 80 knot storm and Ken had to stop three times on the way home to bail her out. Amy was one of the most seaworthy Couta Boats built and a lesser boat would not have made it. This was the last Stony Point trip Ken did.

Amy was not the best for netting, being too deep and too high wooded, so Ken had a net boat built by Jack Pompei and sold Amy to his brother Robin Wood of Cowes, Phillip Island.

Custodians: John Counsell and John Jansson; 2005 – Present
The present custodians John Jansson and John Counsell decided to buy Amy as she was at the time the last remaining old Couta Boat in the area and they did not want to see her leave Rhyll.

After a six month long restoration of the hull, Amy was returned to the sea at Rhyll on Saturday 3rd February, 2007. The work was undertaken by her owners in the former Phillip Island and Western Port Steamship Company workshop opposite the Rhyll Jetty.

Over a further six months, spars and rigging were made up. Original blocks and fittings were restored and, where not available, copies were made. Mitch Lacco’s grandson made a pattern for the spider band, which was cast in bronze. Standing rigging was galvanised steel, hand spliced and served over. Amy had her first sail with the new rig on 17th February 2008, and a photo of her was published in the Re-launching page of the Wooden Boat Magazine.

Amy Christina is listed in the ‘Australian Register of Historic Vessels’ on the Australian National Maritime Museum website.