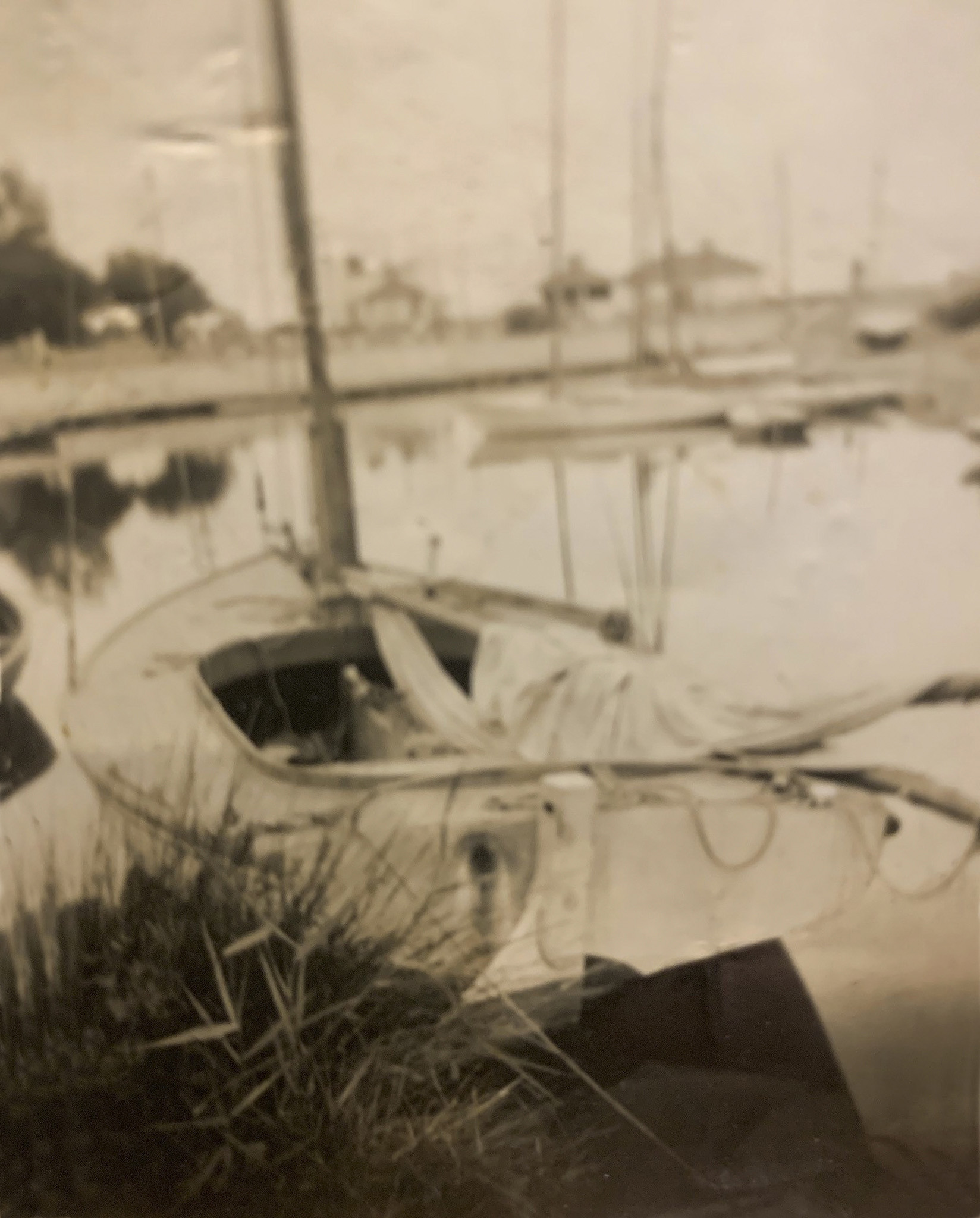 Custodian: Mr McComb; 1936 – Late 1930s
Amanda was built by Ken Lacco of Rosebud, Victoria, circa 1936. Her original name is not known. Reliable sources reveal, however, that she was built for a Frankston fisherman whose name was McComb. She was constructed with a shallow draft to accommodate the low water depth of Kananook Creek where she was berthed.

The boat was in the custodianship of Mr McComb for just a few years until he sold her to a local from Victoria’s Western Port, Les Peterson, before the start of the World War II. McComb had enlisted and before his departure he reached an agreement with Peterson that if he survived the war he would buy the boat back. McComb did survive but on his return Les Peterson changed his mind on their deal. In this period Les named the boat Amanda after his daughter.

Custodian: Les Peterson; Late 1930s – 1982
Les worked for a ferry company that conducted a mail and passenger run on Western Port, between Stony Point and French Island, Victoria. Because the ferry had a limited schedule, Les established a back-up ferry service, using Amanda to ferry passengers to and from French Island and, occasionally, to Cowes. In this role, Amanda fulfilled an essential service; Les was always on call, relying on a 2 cylinder engine to power the open boat across the difficult stretch of water.

Even though Amanda is only 23 foot and 6 inches in length, and her freeboard is a mere 18 inches, it was common practice during the summer months for her to carry a cricket team, the supporters and quite a few cases of beer. Folklore has it that on more than one occasion she carried coffins from the island. On one night, Les promptly acted as midwife to assist a woman who gave birth as she was being transported to Hastings Hospital.

In 1970, Les tragically met his death, not on Amanda, but in his dinghy. To get to and from Amanda’s mooring Les used a dinghy which was moored on permanent anchor at the Stony Point Jetty. When Les and his brother-in-law returned from a ferry run to French Island, they were bringing the dinghy into the jetty when Les tragically fell out of the vessel into choppy seas. His body was weighted by wearing gumboots and an army trench coat and was not found for some days.

After the death of Les, Amanda was taken into dry dock in Arthur Peterson’s motor garage located in Crib Point on Western Port. She was to remain in the garage for the next 10 years until Tim Phillips from Portsea found her in 1982, in a deteriorated state.

Custodian: Tim Phillips; 1982 – 1985
Tim already had a close connection to the boat through his mother, Eleanor. She conducted the family’s building company and would make regular work trips to French Island on Amanda, so she was delighted when Tim told her he had purchased the boat.

Amanda was transported to Tim’s backyard in Portsea and in just three months he carried out an extensive restoration including installing a new keel. He was assisted by Murdoch Clarke, a family friend and carpenter. Initially the boat was painted white, then later, a fire-engine red.

Tim raced Amanda in the Couta Boat Club (CBC) events. For the first season he used her under sail only, as he could not afford an engine. Often, if there was little wind, he would scull her on and off the mooring.

Custodians: Hal Guilday, Alan Ross and John Ross; 1985 – 2000s
In 1985, brothers Alan and John Ross purchased Amanda from Tim. They had owned and sailed the smaller Corsair but quickly became adjusted to sailing the larger Amanda. John found her to be pretty much vice-free on all points of sailing and enjoyable to sail. In particular, Amanda responded well in a fresh to strong wind with one reef in the main and the No. 2 headsail. To markedly improve her performance under power, John had  a new 18 hp Yanmar engine installed in her.

John, who was a long-term committee member of the Couta Boat Club (CBC), recalls competitively racing Amanda against boats during the 1980s that are today still racing out of the Sorrento Sailing Couta Boat Club, including: Lucy C31, Joan C99 and Regina C34. To add to the adrenaline, these smaller boats would often finish the race with the 26 foot tail-enders!

As the Couta Boat fleet grew, it was divided into two divisions, and Amanda finished up as one of the smallest boats in Division 1. On occasions, this caused some anxiety for her owners, particularly at the start line when a bunch of the larger boats would reach in and attempt to harden-up around the distance mark off the stern of the race officer’s boat.

There was a lot of barging, biffing and bumping, shouting and sometimes pretty strong words and almost always a general recall. All this meant our race was over at the start as we would be stuck in dirty air and have to tack away to get some clear air. Not fun at all. We finally decided to move to Division 2, which was much better. Racing became fun again.

John particularly enjoyed sailing Amanda in a mixed fleet such as The Petersville Regatta and seeing the reaction of ‘those sailing plastics’ shouting when he would pass them:

He also enjoyed the Queenscliff Regatta, particularly the raft-up and being challenged by the tidal flow when racing.

For John, the Couta Boat is a unique vessel that has retained its working boat heritage of having a hull that makes her seaworthy, safe and comfortable. He recalls the times when McComb would appear on the Portsea Pier, having travelled by bus from Frankston, to see this unique boat being sailed and to reminisce about ‘his boat!’

Similarly, John recalls the day when Amanda Peterson, after whom the boat was named, arranged a visit. John rowed her out to Amanda, she hopped aboard, had a look around and started weeping. After a time, she asked to be returned to the beach. For John, the visit revealed the depth of her emotional attachment to her father’s former boat.

In the time of their custodianship, John and Alan ensured that annual maintenance, which was carried out jointly by the crew and the Wooden Boat Shop, was to a high standard. After some years, Alan Ross sold his share in Amanda to Hal Guilday, a long-term member of Sorrento Sailing Club (SSC). Sometime later Hal became ill, so Amanda was sold.

In early 2005, Chris and others sailed Amanda from Williamstown at the northern tip of Port Phillip to the Wooden Boat festival in Hobart. The epic journey was via Tasmania’s west coast and took a few weeks.

Although this route is sailed by many adventurous yachtsmen, it is renowned for its notorious seas and its remote and rugged coastline, and is a test of endurance for any sailor, especially in an open Couta Boat. The return journey was via the east coast, completing a circumnavigation of Tasmania.

Chris sailed Amanda out of Williamstown as part of the Classic Yacht Association Australia (CYAA). Amanda is listed as having won 1st Handicap, Division 2 in the 2011 CBA Portsea Cup.

On his first sighting of Amanda and being a wooden boat devotee, Doug was driven to purchase her. He deemed her to be a boat of historical significance that required a custodian to preserve her heritage. Currently, in 2021, she is in dry dock in a shed in Toowoomba, Queensland awaiting restoration.