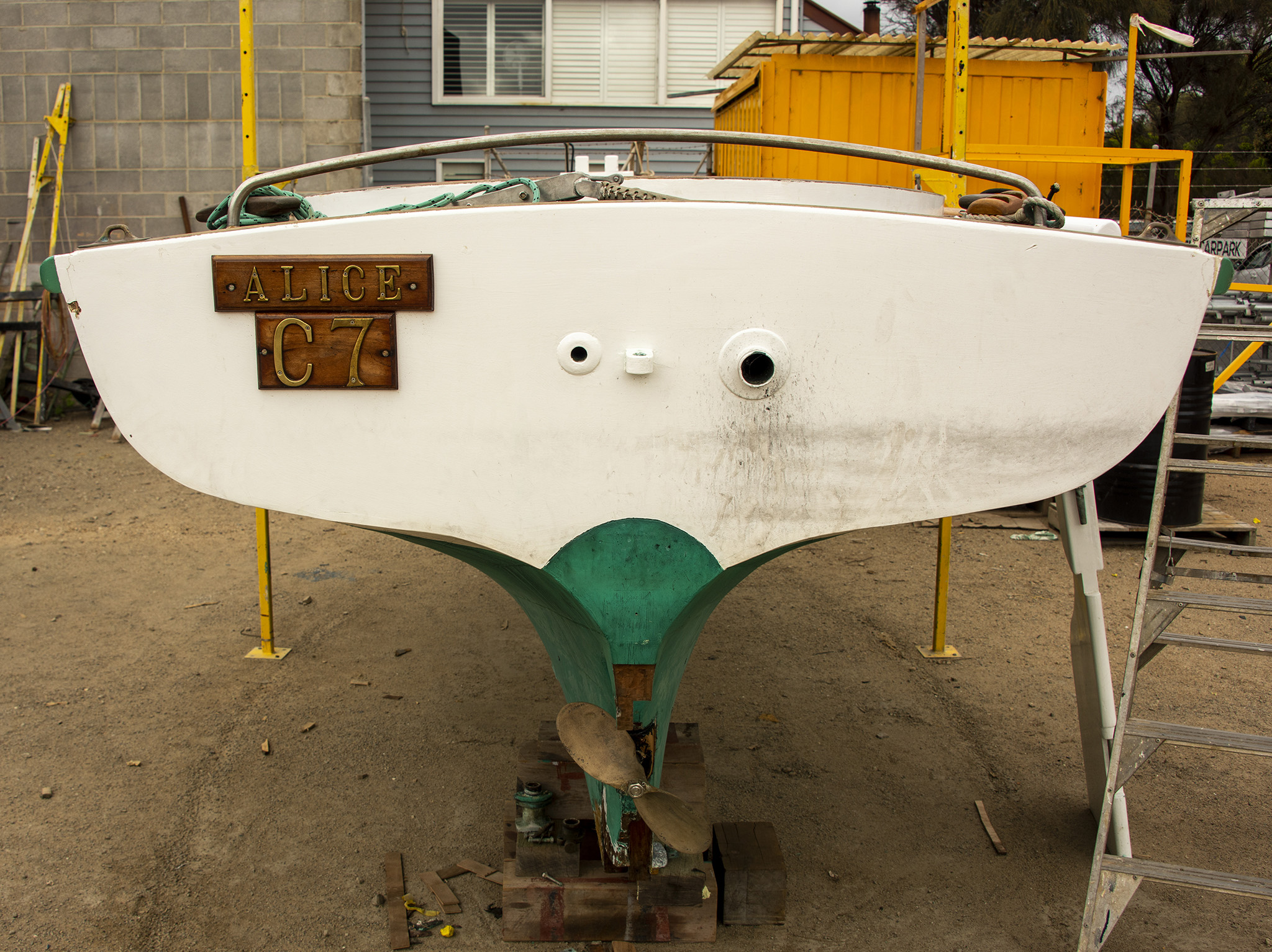 Early Years
Alice was built by Peter Locke in Queenscliff, Victoria, circa 1930s, to a length of 20 foot. It is believed that in her early years she worked as a fishing vessel out of Lorne on the south-west coast of Victoria.

Custodian: Charlie Young; Early 1980s – 1984
In the early 1980s, Blairgowrie boatbuilder Charlie Young came across the boat at Rosebud, located on the southern shore of Port Phillip. He  took her to his garage and, with the assistance of his sons Chris and Danny, restored her. Charlie removed a lifting hook from her stern, indicating that she had fished out of Lorne. The hook enabled the boat to be hoisted in and out of the water for storage on the pier overnight.

Custodian: Nancy and Robert Kimpton; 1984 – Present
In 1984, Alice was for sale. Nancy and Robert Kimpton had purchased and sailed a 16 foot net boat for three years in the early Couta Boat fleet that raced out of Portsea. They were advised, however, to ‘get a real boat’. After viewing Alice on her mooring at Camerons Bight, Blairgowrie, Nancy met with Charlie Young and negotiated to purchase the boat.

The Kimptons entered Alice into most of the scheduled Couta Boat Club (CBC) events.

We enjoyed the challenge of sailing in the fleet, despite copping the occasional abuse for getting ourselves in someone else’s way. In those days there was a lot of competition between the old boats and the few new replicas.

The course was a passage race that commenced at Portsea and was sailed along the South Channel, Sorrento Channel and Capel Sound,  finishing at Blairgowrie. In these passage races Alice usually performed well, due to the long reaches and a favourable handicap that was set from her performance around the buoys in club races.

Nancy and Robert continued to sail Alice in CBC events regularly into the 1990s, but slowly discovered the joys of cruising rather than racing.

Over the last 10 to 15 years, the boat has competed in a couple of the Lacco Cup series conducted at Sorrento Sailing Couta Boat Club. The siblings, however, now prefer the peace and quiet of a cruise to Rosebud on a Saturday afternoon, to racing. They use Alice for recreational fishing, drifting for flathead or anything else that will bite.

In 2012, the decision was made to have the deck replaced before it fell off. It was soon discovered that she was in need of extensive repairs and so the boat was practically rebuilt, hopefully extending her life by another 35 years.

After nearly 40 years of owning and sailing Alice, Robert reminisces:

She has been a welcome member of the Kimpton families over a long period of time. The time has come to move her on but we can’t take that giant leap!