One of six similar boats built by Alex Lacco in this period. Long time owner Alex Gillam saw her advertised in the Age she was then in Western Port and owned by ‘an Air Force type’ hence the name ‘Spitfire’.

Alex missed buying her from him but bought her from the new owner when re-advertised from Williamstown and used her for fishing for 15-20 years.

Dugga Beazley fisherman of Port Melbourne then bought her and commissioned Charlie Strong, a Port Melbourne boat builder to restore her including re-decking and installing a centre case. Dugga Beazley has worked and fished from a large number of Couta and net boats. His love and mastery of these craft would be hard to equal. He and Charlie Strong have had an involvement with a large number of the boats.

Purchased in 1984 by Peter Gibson and renamed the Rose.  She capsized and foundered north east of Policeman’s Point in the vicinity of the Portsea Hole in 2nd Feb 1986 in strong winds and an ebb tide which is particularly strong at the convergence of the channels off Portsea and she could not be found. The five crew were rescued after about 20 minutes in the water.

Years later she was found by divers. The Gibsons had retained equity vis a vis the insurers and a deal was struck with the divers for salvage. The divers Melbourne Diving School were lead by Barrie Head who had rescued the crew after the sinking. Salvage began January 1990 but was hampered by deteriorating weather as well as restricted dive times caused by depth and tide.  Sand was jetted out of the hull revealing the gear including fire extinguisher fully operational. She was pulled free of the sand and held upright to prevent filling with sand while ballast was removed. Airbags fitted to traveler hawse, chain plates and stem providing three tonne lift brought her to the surface and she was towed ashore. After a year of slow drying she was completely restored.

She was previously owned by Tony McNamara who sailed her under sail number C666.  Soon after purchasing Spitfire Tony and crew, not experienced sailors, took her out for a race and got hit by squally weather.  They were so intimidated by the experience they left her on the mooring until they built up courage to take her out again.

Purchased by David Barnes in 1998. 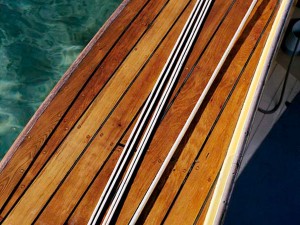