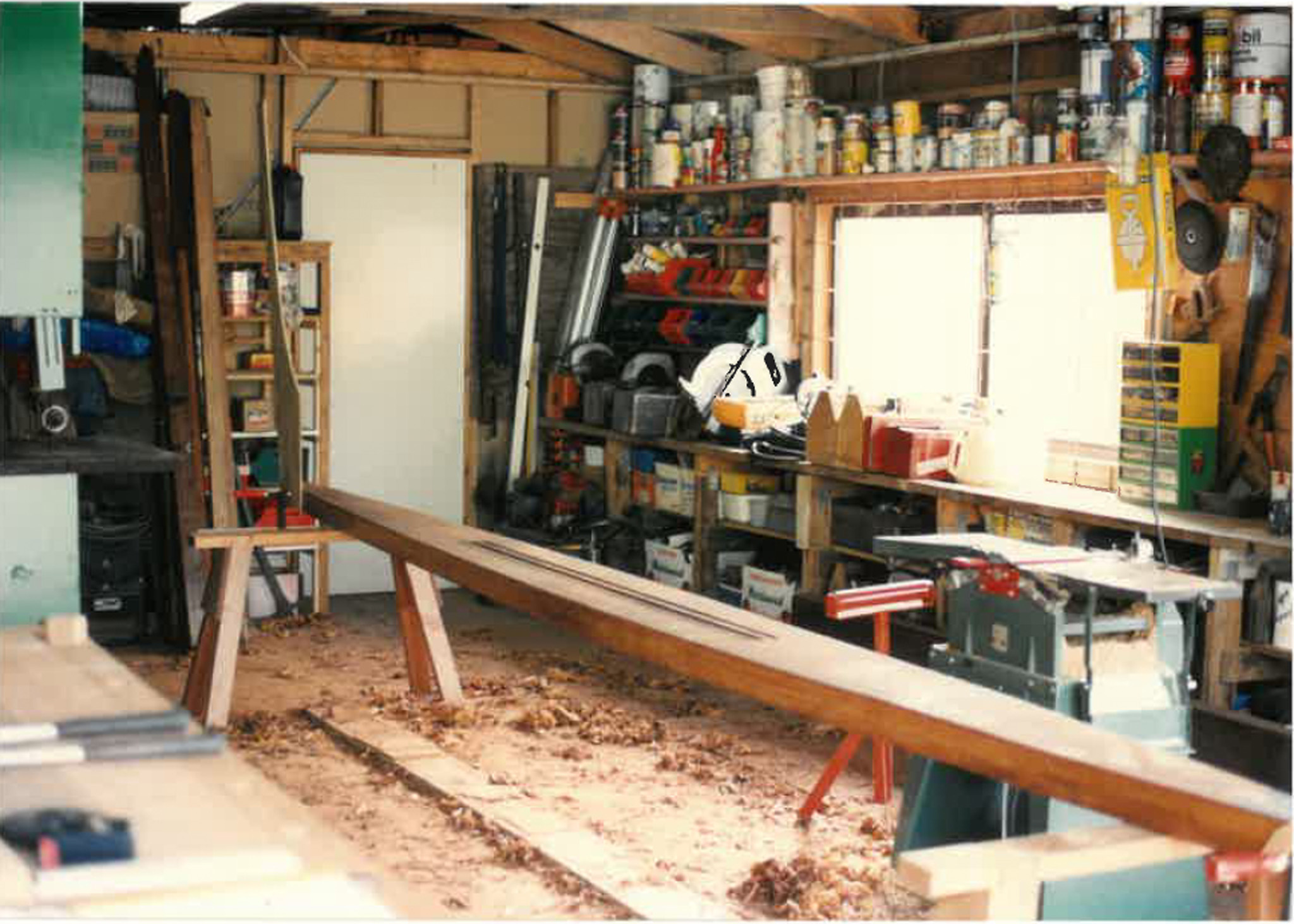 Custodian: Andrew and Ken Murray; 1991 – 1998
In 1991, Ken and Andrew Murray decided to build a new Couta Boat in their garage at home in Rosebud, Victoria much to the distress of their neighbour, once the riveting of the planking started! The neighbours were obviously not devotees of wooden boats, as were Andrew and Ken.

Ken Murray started his interest in yachts back in the early 1970s when he built a Hartley trailer sailor. He had also helped his brother build a Paper Tiger catamaran. Ken’s interest didn’t wane as later on he was contemplating building a Boden designed yacht, but with the realization that it would take quite a number of years to complete, he decided to purchase a yacht instead. So the wooden H28 Marisa came onto the scene and the friendship with boat builder Tim Phillips started. After bringing her up to standard with a comprehensive refit, Ken enjoyed many days sailing around the southern peninsula of Port Phillip. It was time, though, for Ken to build his own boat.

With his son Andrew, Ken approached Tim Phillips at the Wooden Boat Shop, Sorrento to discuss a design. As they looked at various shapes and lengths of Couta Boats down in the yard, they came upon one which was noted as a fair and lovely shape, only to be told it was one of Tim’s own designs and builds.

The design criterion was for a 20 foot vessel with a shallow draft so they could get her into the little and shallow Camerons Bight Jetty at Blairgowrie. Whilst being house builders and carpenters, where most things are straight and square, boat building was a whole new ball game. But they saw it as a challenge.

Once Tim had finalized the design, a new style called the ‘Woodpecker’ was born. After receiving the plans, the lofting for the frame stations on the timber floor in the garage started. All the while asking questions as the build proceeded, as well as going down to the Wooden Boat Shop and looking over the building of other Couta Boats, and asking more questions.

With Tim on hand to steam the Celery Top Pine ribs into position, progress was moving along nicely. He would call in to help along the way, and once noting the stem had a ‘Peter Locke style look’ to her.

After the Queensland Kauri planking was finished and the chain plates were installed, Ken and Andrew added a horizontal stainless steel strap inside and across the ribs, past the chain plates, then bolted through both the chain plates and ribs to stop any future hogging or stress on the hull by spreading the load across a vast number of ribs instead of just a few.

When it came time for the lead ballast, they decided to ignore past traditions and cast the lead to the shape of the bilge. So, making a series of steel moulds to suit the changing shape along the bilge, and then numbering them with green and red paint to denote starboard and port sides. With Woodpecker painted and with her gold coloured cove line, she looked sharp as they moved her out of the garage. Andrew and Ken completed building Woodpecker in 1994.

With the help and guidance of Tim and others, there was a great sense of achievement.

You take the tiller for the first time and watch as the breeze fills the sails as she glides across the water.

Andrew and Ken then sailed her for a further four years but never raced her.

Andrew commenced sailing Woodpecker at a social level with his wife and friends as crew, but soon the competitive streak surfaced and he campaigned the boat every race day in the Couta Boat fleet at Sorrento. In a moderate breeze Woodpecker had good speed for her length.

Highlights in her racing career included an overall win in Division 1 and 2 in the Schnapper Point Regatta at Mornington and a Division 2 win in the Match Racing Series. Woodpecker was often raced two-handed with regular crew Alan Thompson. For special occasions, Andrew’s then teenage son Nick who was a member of the Victoria Youth Squad would come along as tactician to direct his father. In a memorable twilight race when the squad was training at Sorrento, Andrew, his son Nick and three members of the squad raced her in heavy winds and finished first…one full leg ahead of the next boat.

In 2001, Andrew was offered a crew position on Jeffery Richardson’s Division 1 C97 for the Australia Day Regatta at Geelong. This was his first sail in a Division 1 Couta Boat and the experience had Andrew hooked to continue to sail in full size Couta Boats. Woodpecker was sold to David Showas, and Andrew and crew Alan continued to sail on C97 for a number of years.

Woodpecker was an amazing little Couta Boat, very pretty with a good show of speed for her length, and an absolute credit to her builders, Andrew and Ken Murray.

Custodian: Barbara Price; 2002 – 2004
In 2002, Barbara Price purchased Woodpecker. For a period of time, Barbara sailed her in the Division 2 fleet at Sorrento Sailing Couta Boat Club (SSCBC). In 2005, she won 1st Handicap, Division 2 in the CBA Portsea Cup. But in this time Barbara was spending a good part of her year in England and found the challenge of attracting a dedicated crew and of owning and maintaining a boat difficult, so she decided to sell Woodpecker.

On one race day off Sorrento while waiting for the second race to start, the crew experienced the tremendous power of Couta Boats when Woodpecker collided with Division 1 Couta Boat Vivienne, instantly snapping off Woodpecker’s jibboom as the boats crossed paths. What a shock! Peter Gale, skipper of Vivienne quickly turned his boat around and came to her rescue as the crew on Woodpecker pulled the sails down and retreated to shore. During the weeks that Woodpecker was being repaired, Maree sailed on Vivienne for a few races and that was how Maree and ‘Gado’ met and have been a happy couple ever since.

Custodian: Ann Boyce, Susie Lachal, and Kaye Southwell ; 2006 – 2009
In 2006, Maree and Louise sold their share, and Ann, Susie and Kaye continued as custodians of Woodpecker for another two to three years.

Custodian: Ann Boyce, Susie Lachal; 2009 – 2017
The syndicate then reduced in size again to Ann and Susie who owned and sailed her until about 2017, when Susie bought Ann’s share.

In 2017, Woodpecker underwent a transformation, with her owner’s intention of using her as a recreational craft rather than for regular competition sailing. With the assistance of boat builder Tim Phillips, Susie removed the jibboom and converted her into a cruising yacht. The headsail was cut down and a smaller jib was fitted so that Susie and family can turn off the motor and go fishing and dolphin watching. However, Woodpecker can be easily reverted to her previous pedigree as a racing Division 2 Couta Boat whenever the need might arise.