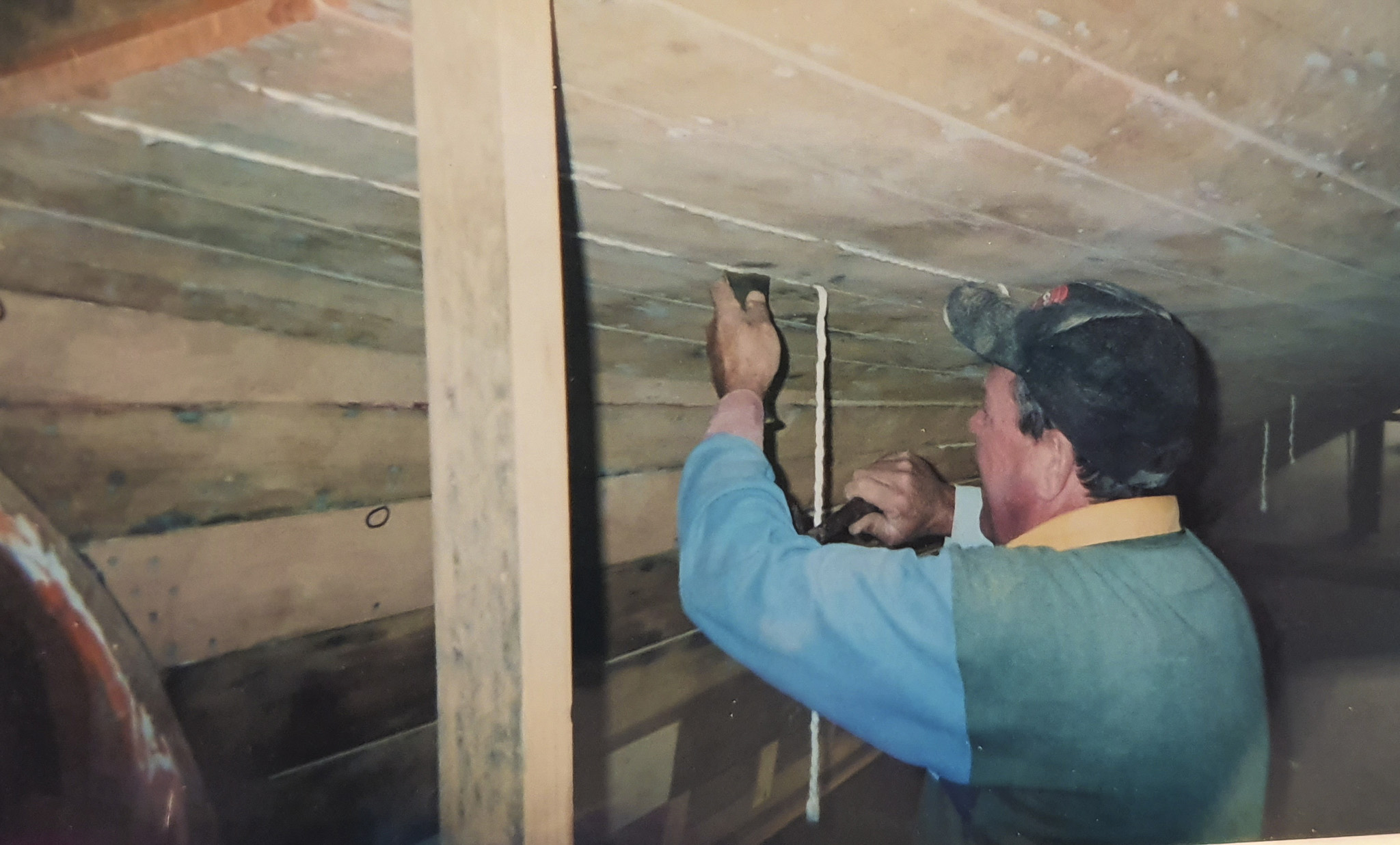 Early Years
The early history of White Wings is intricately linked to the Newman family, one of the prominent families in the Victorian fishing industry. From the late 1800s, members of the family fished out of various ports along the Victorian coast for almost 100 years.

The Victorian Electoral Records indicate the movements of Charlie Newman Snr. and his sons, including his firstborn Charlie Jnr, in the early decades of the 1900s. In this period they periodically moved between fishing ports in Gippsland and Western Port in Victoria, following the barracouta. But, during the years of the World War I, life became difficult for the family when Charlie Snr. was interned due to the Newman surname was of German origin. See Appendix for a detailed account.

After World War I, Charlie Newman Snr. was living in Metung on the Gippsland Lakes in Victoria while his son Charlie Jnr. had moved to Newhaven, across the channel from the fishing port of San Remo on Western Port.

A ‘Bill of Sale’ that is in the possession of the current owner Jonathan Wishart, records that White Wings was built by Charlie Newman in 1933 at Newhaven on Western Port.

During the 1930s, White Wings was known to have been a regular Line Honours winner at the annual San Remo New Year’s Day Regatta, she was known as ‘the Flyer’. There was great rivalry between the Queenscliff and the local San Remo fishermen; the stakes were always high. In particular, White Wings helmed by Charlie Newman Jnr. was pitted against her rival, Wattle, helmed by the renowned ‘Cack’ Todd who regularly took out the Honours.

In the following decades, White Wings remained in the Newman family but she went even further afield than Westernport, fishing out of Port Fairy on the south-west Coast of Victoria. It appears that she was taken to Port Fairy by Charlie’s brother Frank Newman. Frank first moved to Port Fairy in 1927. His son Brian Newman tells that the family went to and from Port Fairy to Newhaven during his childhood. Brian remembers living at Newhaven during the years of the World War II.

Port Fairy boatbuilder Garry Stewart reports that when he first came to Port Fairy in the 1960s White Wings was used for fishing out of Port Fairy, catching ‘couta, cray and salmon, often up to four nautical miles off-shore.

Custodian: Robert Smith; 1953 – 1957
Records show that Robert Smith of Flinders took over the registration from 1953 until 1957, when the records ceased.

Custodian: Graham Maloney; 1962 – 1967
Graham purchased White Wings in 1962 and owned her for five years. He used her as a commercial fisherman, fishing for barracouta and cray as far afield as the Julia Percy Island. Graham Maloney was the last owner in Port Fairy to fish out of her commercially.

Custodian: Unknown; 1967 – Early 1980s
In 1967, Graham sold White Wings to a local from Williamstown in Melbourne who had a flybridge added, for charter cruising in Port Phillip.

What became of White Wings during the next decade is unclear. However, she reappeared in the early 1980s when John Ross, a regular in the Couta Boat Club events was contacted by a Yarragon farmer Mike Malady from the Gippsland region to say that he had a Couta Boat in a paddock on his farm. But after inspecting the sad state of the hull with Tim Phillips from Sorrento, John Ross decided also that the boat was beyond salvage.

Custodian: Chris Young; c1985
By good fortune, however, White Wings was salvaged. In about 1985 she came into the possession of Blairgowrie boatbuilder Chris Young. Chris found her at Lethbridge, a small town near Geelong in Victoria and transported her by ferry to his boatyard.

Chris knew that he had come across a ‘gem’. He recognised White Wings as a Charlie Peel design, and intended to restore her to her former legendary glory. But, when other circumstances intervened, Chris sold the hull to the current owner Jonathan Wishart. The transaction was made when they were both working on the super yacht SY Eclipse refit in Sydney.

Custodian: Jonathan Wishart; Mid 1980s
The new custodian Jonathan Wishart co-opted Lenny Dodson to check out the hull, to see if it was salvageable. On seeing its state, Lennie’s initial response was:

There were bushes growing out of it and all the planks had come away from the stem. In addition, it did not have a centre-case, but somehow the original registration RFB 1933 was still on the hull. Jonathan, who has a love of wooden boats, could see the potential in the decrepit structure and employed Lennie to undertake a complete restoration.

The boat was moved to Mullies Marine Services boatyard in Sorrento in 2000 and Lenny commenced the long restoration process, with the help of Mark Cameron and Robbie Hill. Jonathan sourced the timber of Burmese Teak, Jarrah and Oregon, and supplied the custom stainless-steel fittings. Lenny was able to salvage some of the original Kauri planks, but inserted a new stem and sternpost; a centreplate-case and transom were also fitted.

Once the boat was secured with new ribs, she was then moved to a shed at Rye Back Beach on the Mornington Peninsula, Victoria. Her 3 cylinder Yanmar was sourced and rebuilt from a Sydney 38′ yacht that struck the power lines in Pittwater and had only 10 hours on it. The lead ballast was supplied by AMAC. In addition, the original keel was kept but later, when the restored White Wings ran aground in Southport, Queensland it was discovered the keel had been eaten by teredo worms and had to be replaced.

After White Wings was restored, she was trucked to the Gold Coast, Qld. where she was rigged, commissioned and sailed out of Southport Yacht Club (SYC) with cameo appearances at the Royal Queensland Yacht Squadron in Brisbane. Col Anderson of Doyle Sails, Melbourne made her a beautifully cut set of sails and she performed to her legendary status. She won the 2005 Yalumba Summer Series Regatta out of SYC as the oldest competitor. Jonathan declared that she was the oldest boat in the fleet by 60 years, the only wooden boat and the only gaff-rigged boat;

She turned a few heads.

In recent years, Jonathan’s commitment on the SY Eclipse and to the build of SY Encore has been a full-time occupation. Hence, White Wings has been sitting secure in the Wishart shed in Tin Can Bay, Queensland. The end goal for Adrianne and Jonathan is to one day bring White Wings home to Port Phillip, to race and show off her immaculately varnished transom, and to relive her ‘legendary status’.

Appendix The Wolf: How One German Raider Terrorized the Allies in the most epic voyage of World War I

The Newman surname was of German origin. Christoph Johan Theodore Niemann arrived in Australia in 1863. But shortly after his arrival Christoph anglicised his surname to ‘Newman’ and his first name to Charlie. Charlie’s firstborn was also Charlie, and so the father-son duo was known as Charlie Snr. and Charlie Jnr.

However, the name change did not protect the family from scrutiny by military authorities during World War I. In this period electoral records show that in 1914, fisherman Charlie Snr. and his very large family of fourteen children were living at Pound Creek in South Gippsland. It was here that he came under suspicion from the local fishing fraternity and was interned for a period during the war years.

When the German Raider, the Wolf, moved into southern Australian waters, Charlie Newman Snr. came under suspicion from both the Military Authorities and the local fishing fraternity for supposedly being in allegiance with the Wolf. The catalyst was the sinking of the Australian Naval vessel Cumberland in a minefield off Gabo Island. Charlie Snr. was accused of being in allegiance with the Germans and sending signals to the Wolf.

As a result, he was detained in a camp for enemy aliens. This was a particularly difficult period for the family but his older sons, including Charlie Jnr., kept their fishing boats operational. After numerous investigations by Military Intelligence Officers, Charlie Snr. was eventually exonerated and released in 1919. He returned to the family business of fishing

Reference
Guilliatt, Richard & Hobnen, Peter (2010). The Wolf: How One German Raider Terrorized the Allies in the most epic voyage of WW1. https://books.google.com.au ›