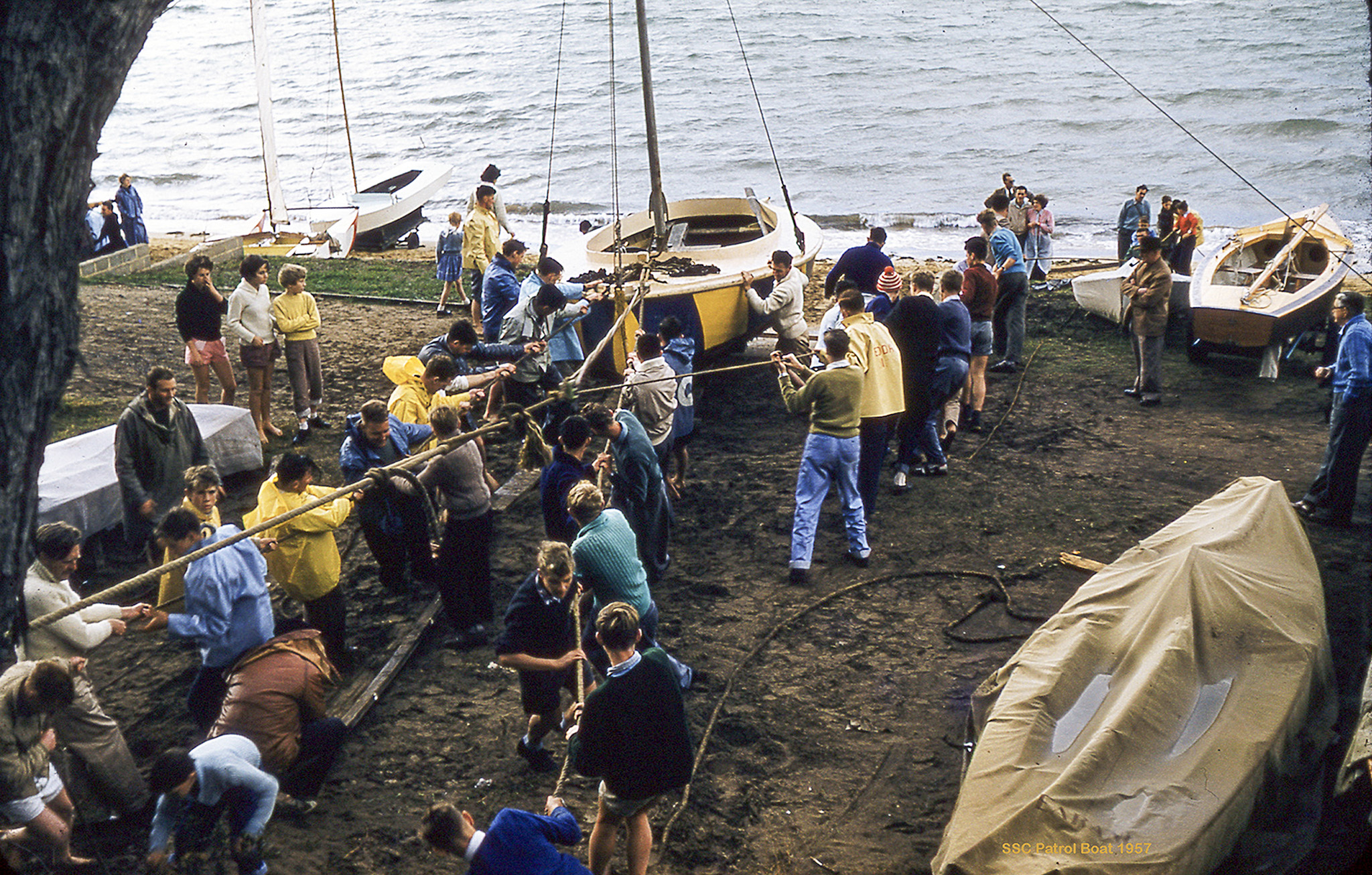 Early Years
Volunteer has a fascinating history that links the Sorrento Sailing Club (SSC) to the Beazley’s, the pre-eminent fishing family of the waters of Port Phillip. She is a classic Port Phillip net boat that has been in the Beazley family at Port Melbourne from the 1920s.

She was built by Jesse William Merrington about 1920, on a vacant lot adjoining his house in Liardet Street, Port Melbourne. The Merrington family had a boatshed on the Port Melbourne Lagoon (now reclaimed land inshore from Lagoon Pier, Port Melbourne) from around 1860 where they operated a boat hire business. They built a large number of boats, many like the Volunteer from the moulds of the Swan built in 1895, but generally one plank higher.

Built for netting, rather than the use of hand lines these craft are ‘double ended’; that is, they have a canoe stern. This has a number of purposes; there are no stern corners on which to catch a net as it is hauled in, and the shape, being similar to a bow, allows the hull to track upwind without laying off as the net is hauled. It also has an advantage of comfort, as the waves can more easily pass harmlessly down each side without slapping against a square transom and spraying the crew. As Dugga puts it;

That’s the thing with working boats. They were built for their conditions. Everything was made for a purpose.

Built for commercial fishing and in keeping with the period, she was rigged with a lug sail, with a long yard of about 18 foot and a jib flown from a chain plate on the stem. These boats avoided jibbooms as they interfered with the netting. She now carries a gaff rig and jibboom, which were fitted to join in the Couta Boat Club (CBC) racing following a restoration in the 1980s. Merrington’s boats were generally 28ft. in length and about 8ft. in the beam and quite shallow being only 2ft draft. With no curve or ‘spring’ in the keel. They are lighter in displacement than the Couta boats that followed and being relatively narrow and shallow, somewhat easier to propel, whether by sail or oar.

Custodian: George Beazley Snr; 1930 – 1955
George Beazley Snr. purchased Volunteer in 1930 for £20. She was in poor condition with her back broken following a big storm that wreaked havoc in the Lagoon. His sons George (Sam) and Len (Oppy) who was an Honorary Life Member of the CBC put in a new keel and used her for many years as a licenced fishing boat.

In 1951 she was the only boat within the Port Melbourne Lagoon to survive unscathed a storm that tossed most of the boats onto the rock wall that used to line the shore between Lagoon and Town Piers, Port Melbourne. After George senior died in 1955 she was sold and not seen by the Beazley family for 20 years. Vale George.

Custodian: Sorrento Sailing Club; 1956 – 1968
By coincidence, it was the Sorrento Sailing Club that purchased her from the Beazley’s in 1956 for the sum of £339 and arranged for some SSC member sailors to motor her from Lagoon Pier, Port Melbourne to Sorrento where she was to become the club’s first rescue boat. Until that time, the fleet had relied on the generosity of members providing private craft to undertake patrol and rescue work.

Prior to leaving Port Melbourne she was painted in SSC club colours, distinctive and somewhat unbecoming on a boat, blue and yellow diagonal stripes. Coincidentally these are also the colours of Port Melbourne Football Club’s arch rivals; Williamstown – whom they were to play the weekend Volunteer was due to depart, leading to a few questions and quite a deal of banter regarding loyalties.

Vice Commodore Col Davey and a couple of young Gwen 12 skippers undertook the delivery voyage, but they ran out of fuel around the Mud Islands and finished the trip under sail.

For some 13 years, Volunteer faithfully undertook patrol duties under the command of firstly Norm Neale, and then Alex Robertson.

At the end of each sailing season she was hauled across the sand (there was no concrete ramp in those days) up to what is now the concrete apron of the hard stand area for wintering. The inclusion of an anchored turning block in the ‘new’ club house assisted these manoeuvres. She had no radio – communication was by Aldis lamp and Morse code or pre-arranged light signals.

Harold Lang, a boat builder in the Sorrento main street, fitted Volunteer with new ribs in 1962 and a larger propeller.

In 1968, when performing a rescue off Rye in severe weather, she started to break up, taking on a good deal of water and damaging the engine, battery and radio. As a result, it was decided she ought to be replaced.

Dugga Beazley heard Volunteer had been wrecked and presumed her lost. Then one day, many years later, he was attending Walsh’s boat yard in Footscray to inspect a cray boat for a friend. As he was leaving he noticed a brightly coloured canoe stern poking out from behind some containers and an old gum tree. It was Volunteer, looking much the worse from years of neglect. The owner was asking $2,000, which Dugga thought was too much, given the work she needed to become seaworthy again.

Custodian: Dugga Beazley; 1979 – Present
Nothing further was heard until in 1979 or thereabouts. Harry Clark, Honorary Life Member of CBC, heard the yard was to be cleaned out and the old hull burned. He told Dugga who went down to the yard and after some negotiation rescued her from the hands of the wrecker for the princely sum of $100.

Together with Port Melbourne boat builder Charlie Strong, Dugga set about restoring her to working sailing condition. Only about one third of the original boat – the keel and some planking remained, the rest needed replacement. In fact, there was so much damage and deterioration that it was decided to remove the bow stem and stern post and shorten her by a bit. As it happened the authorities were undertaking repairs and restoration of nearby Lagoon Pier. Some of the hardwood pier timbers managed to find their way into the Volunteer; timber for a new stem and stern post was cut from the timbers of the Lagoon Pier, just like the original. She was re-rigged including the addition of a jibboom, somewhat against tradition, to allow for a larger jib to be better able to take on the Couta boats. As Dugga reflects;

You can achieve more sail area and a better balance, and off the wind you can get more power as you get the jib out of the shadow of the main.

If I had to go fishing under sail tomorrow I’d chuck it all out and put a lug rigged sail back on- because it’s simple. It’s one rope to raise the sail. When you lower it, just unhook from the traveller and roll it up…out of the way. And I’d put the jib back on the stem. It’s about simplicity.

The sails on the Volunteer, (and on many other net boats) are a distinctive maroon colour. In her days of working under sail cotton was used to make the sails. Being salt laden the sails never really dried and if left untreated mould would grow in the rolled-up sails. To prevent this, sails, ropes and nets were all treated by being boiled up in a copper with tan bark – which turned them a dirty red/ brown colour. In seeking to restore the Volunteer to be as close as possible to her early appearance Dugga had her new suit of sails cut from the maroon Dacron sail cloth, which triggered him to remark:

She stands out in a crowd.

Dugga, his father Oppy and family, together with their boats Volunteer and Pearl, played an important part in the early Couta Boat Club races. The Lagoon Trophy and Williamstown Cup were sailed off Port Melbourne for many years as a tribute to the significance and heritage surrounding the commercial fishermen at the northern end of Port Phillip. No doubt, helped by a lifetime of seamanship, it was not unusual to see the lighter, shallower net boats lead the fleet – not just at Port Melbourne, but also in the tides and shallows at the southern end of the bay.

Restoration had been faithful to the original, with no engine. When the CBC decided that in the interests of safety, all boats participating in its events must have a working engine capable of propelling the boat at hull speed, a difference of opinion arose – the result was the exclusion of an original and authentic fishing boat, the heritage of which was sought to be preserved. Nor did it escape the attention of astute observers that the net boats under Dugga’s control were able to reverse in to raft up at the Portsea Pier under sail in one smooth movement, whilst many of those newer racing type boats using engines seemed to be forever backing and filling with shouted commands. Nevertheless, the size of the fleet, variety of sailing conditions and limited availability of rescue craft dictated engines were a necessity and Volunteer’s days of competition seemed to be over.

The Beazley family now keep Volunteer on a swing mooring inside the St Kilda Pier and Breakwater. Whilst Dugga says it would take a bit of work and a new set of sails to bring her up to race standard again, she can often be seen sailing out of the marina and across the waters she fished for many years, and still giving modern yachts a good run for their money.