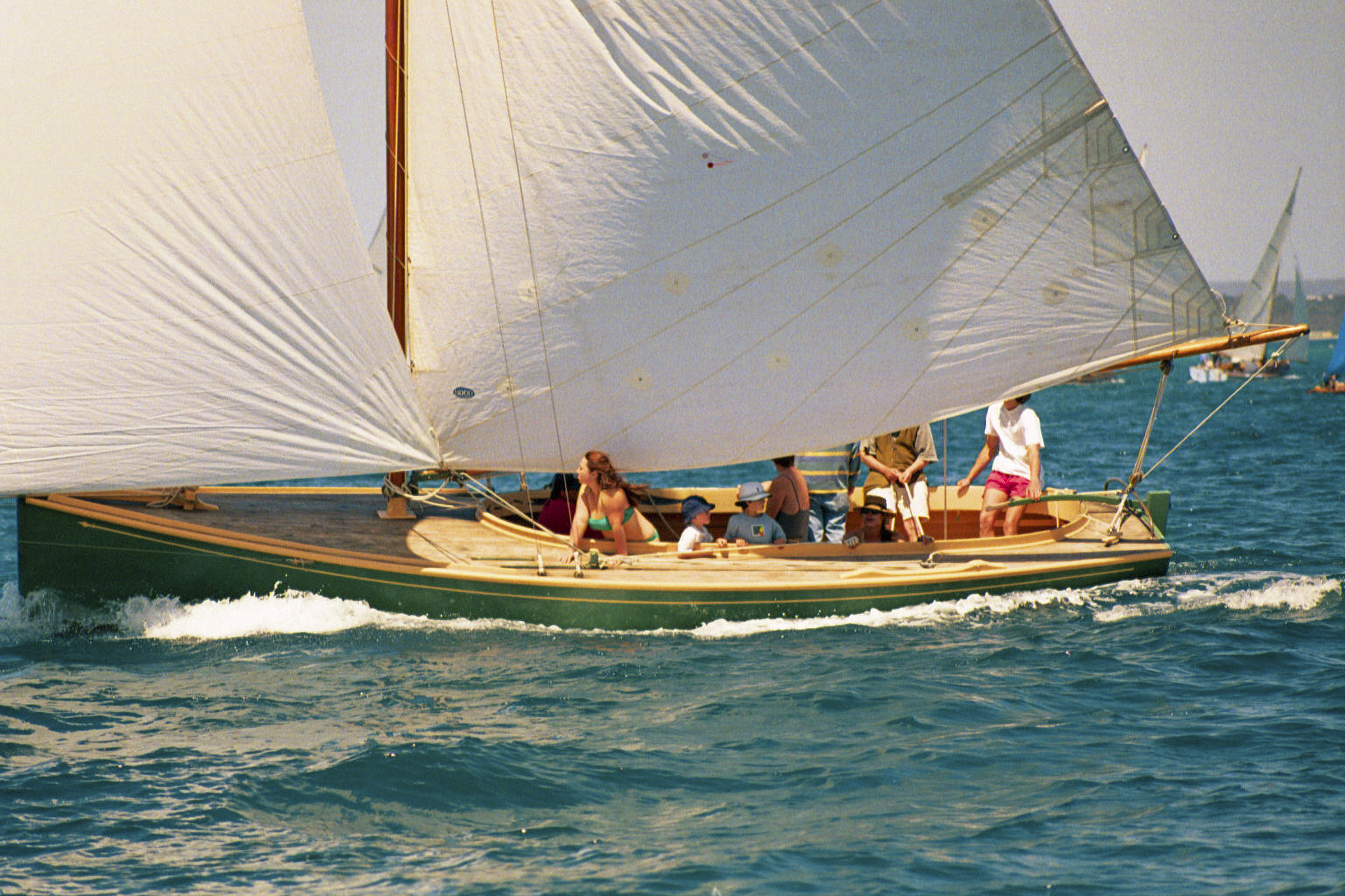 Custodian: George Kimpton; 1985 – Present
THE TRAM was built in the mid 1985 at the Wooden Boat Shop in Sorrento, Victoria. She was commissioned by George Kimpton who assisted with the build. Originally named Jane Louise, she was built for George in his hope to win the Portsea Cup in a typical 22 knot south westerly at the southernmost end of Port Phillip. Since its inception in the early 1980s, the Portsea Cup is recognised as the premier racing event for Couta Boat owners.

Ken Lacco provided the design drawings but these were never used. Her original design was modified by Tim Phillips and George Kimpton. George thought the timber should be left on the stem post and Tim thought she should be made wider and planked all the way up to the top to give her the sheer. Tim recalls that at the start of the build, he set the middle mould up and then set the transom up – just done by eye really. He regards her as one of the very best Couta Boats he has ever turned out. She was his build number 12.

THE TRAM is 26 foot 6 inches in length. She is built on an Ironbark keel, which almost claimed some of George’s foot as he tried to rabbit with the adze. The planking, ribs and deck are made of Celery Top Pine.

She is still in her original condition, with her commissioning owner George still sailing her. She is a rare Couta Boat that still has her original sailing rig and is one of the few Division 1 boats that has not been modified for racing. In heavy going there is still a main sheet pin to put the three strand main sheet around when the modern technology fails. She is one of the rare Division 1 boats with permanent female main and jib sheet trimmers!

Since her launch, THE TRAM has sailed regularly with the Couta Boat fleet out of the then Couta Boat Club and more recently the Sorrento Sailing Couta Boat Club (SSCBC). Experienced sailors: Marty Bryan, Janette Ellis and John Gash were recruited by George to campaign THE TRAM for a season. Their brief was to fine-tune the boat in order to get her sailing more efficiently.

One of first races for THE TRAM was a sail to the northern end of the bay to compete in the Williamstown Cup conducted at Port Melbourne in November 1990. Long term crew member Bridgit Thomas recalled the sheer joy experienced in sailing THE TRAM to and from the northern end of Port Phillip for the event. Another fondly remembered adventure was the trip through Port Phillip Heads and around to San Remo, Phillip Island on Western Port, Victoria for the Lacco reunion.

Over the years of sailing THE TRAM, a steady crew has been loyal to the boat and to George. Bridgit Thomas has been sailing on THE TRAM from the outset; Emma O’Dowd joined the crew in 1998 and boatbuilder Tim Helliwell joined in 2000. For Emma and Tim, sailing on THE TRAM was their springboard for marriage, after an infamous Lady Skippers race of 2001.

C59 is usually known as THE TRAM and is painted in Victorian Tramway colours of green with gold trim, but George has also used various names over the years such as Vote One Putin, Never on Time and The Beagle Boys.