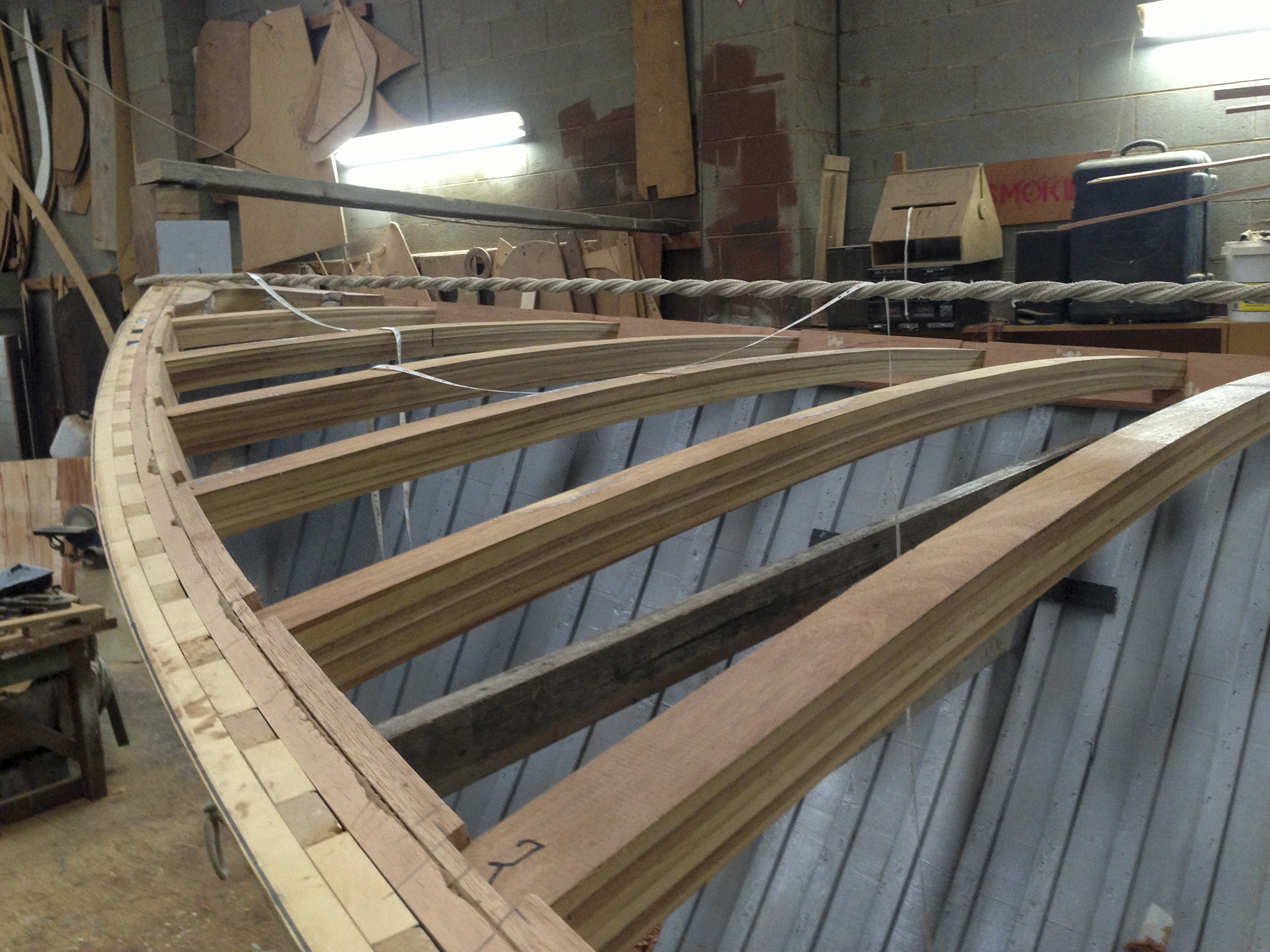 Custodian: Mark Liemant; 2013 – 2017
Mark Liemant commissioned the Wooden Boat Shop at Sorrento to build The Sisters. She was later to be renamed as The Barra. She was modelled on Zephyr C2006, unlike some more recent ‘regatta’ boat designs.

As The Sisters was being built, the Zephyr crew often found boat builders’ boot prints on Zephyr’s deck while she was in the Wooden Boat Shop yard, suggesting the builders may have been measuring up bits and pieces of Zephyr to translate to The Sisters. Tim Phillips has commented that The Sisters was constructed with no expense spared and at that time, she was the best quality Couta Boat built by the Wooden Boat Shop.

Mark had never been a sailor and planned to use The Sisters as a fishing boat. However, as Sam Phillips and various crews helped Mark race The Sisters, he caught the racing bug and the camaraderie on the race days. Still not a comfortable sailor, Mark decided to trade the Couta Boat for a new Wooden Boat Shop motor launch.

Custodian: Ian Blandford, Howard Critchley, Matthew Critchley; 2017 – Present
Howard Critchley organized a syndicate to purchase The Sisters with a view to race for the love of sailing with a mix of male and female friends. The Sisters was renamed The Barra in 2017. The Barra crew are mostly sailors from Mt Martha Yacht Club. They include Ian Blandford, Howard Critchley, Lindie and Matthew Critchley and Peter Weston. Other regular crew members have been Chris Daly, Peter Dempster and Geoff Fox.

The 2017 crew were all experienced sailors, but they were Couta Boat novices. Early in the first season, feeling comfortable while racing in a 10 knot breeze, the crew experienced the power of the Couta sails when the windward whisker stay fitting failed catastrophically, instantaneously snapping the jibboom in two and delaminating the mast with a thunderous crack.

The Barra competed in the 2017 Couta Boat National Titles on Sydney Harbour and Pittwater in NSW. For the crew this was an unique sailing experience with an exhilarating big fleet racing amongst the Sydney harbour’s iconic sights, ferries and abundant water traffic. Preliminary races were held by the Royal Prince Alfred Yacht Club (RPAYC) and the Sydney Amateur Sailing Club (SASC). The National Titles were held by the Avalon Sailing Club (ASC) on Pittwater.

Journey from Mosman Bay to Pittwater, November 2017:
The crew recall the memorable sail from Sydney Harbour up the Pacific coast to Pittwater as being distinctly different to sailing on Port Phillip.

The journey took about four hours in an open sea. We departed from SASC at Mosman Bay on Sydney Harbour in warm sunshine around 9 am, motoring into a very light northerly. At Sydney Heads we met a huge swell but still had insufficient wind to sail. Off the Manly coast we rose and fell with the swell. On shore the waves pounded the North Head rocks, breaking with a tremendous roar and rebounding back into a lumpy uncomfortable sea. The air was saturated with salty spray. It was not a day for faint-hearted surfers at Manly.

The light northerly breeze held on as we motored up the coast enjoying the views of Sydney’s marvellous surf beaches. Around Narrabeen we spotted the blow of a humpback whale. She was cruising towards us, and in a moment she was then alongside. She was enormous. I am not sure who else on The Barra felt out of their comfort zone because it was clear that we would come off second best if we collided. Mindful of our location a kilometre offshore with no other boats in sight, we respectfully and safely passed by and continued northward. An inspiringly marine encounter; but it was not our last.

The Barra continued on, enjoying the views of Bilgola, Newport and Avalon ocean beaches. Then at Whale Beach we spotted another humpback, this time with a calf. The calf was breaching and the mother was blowing. This was another wonderful up close view.

As we passed Palm Beach and approached Cape Barrenjoey, the wind strengthened. We were able to set sails and to savour a relaxing cruise downwind through Pittwater with the magnificent bush views on both sides, finally arriving at our mooring and lunch at Avalon Sailing Club on Pittwater.