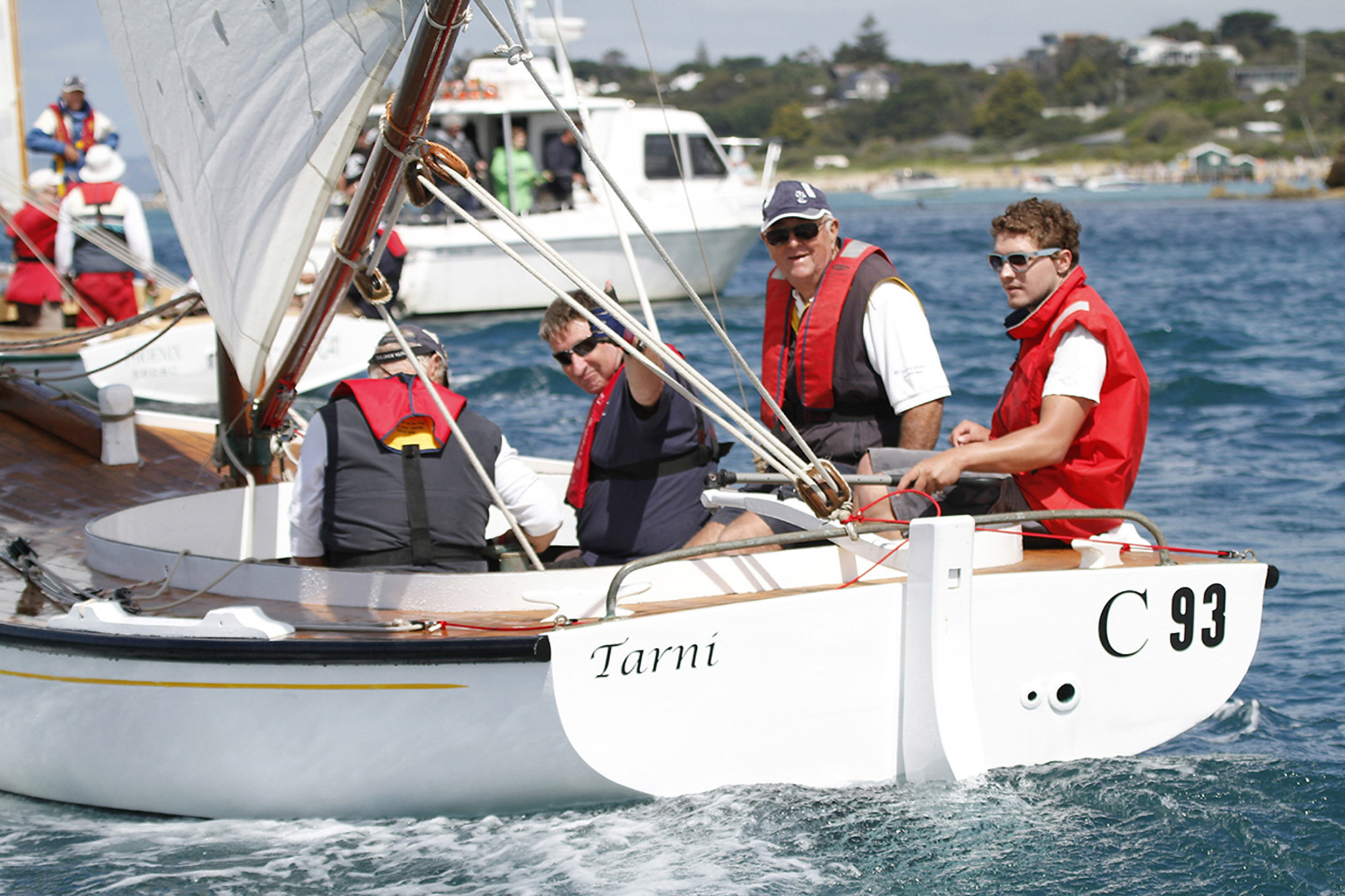 Early Years
Tarni, likely, was originally built as a motorised cray fishing boat in the early 1950s by Cayzer Boats in Queenscliff. The early 50s was a time when Cayzer – built boats were in great demand especially for cray fishing around the west coast of Victoria and south east of South Australia. They were usually built to Bob Cayzer’s design and renowned for their strength and seaworthiness.

While she was a motorised open fishing boat when David Stewart purchased her, she was originally rigged for sailing, had lifting hooks, a centre-plate case and a tabernacle mast for fishing, probably out of Lorne. The centre-plate case had been removed and a Lister diesel installed over the plate as was fairly standard for those times.

Custodian: David Stewart; Late 1970s – 1980s
Her original owners are unknown, but by the late 1970s she appeared for sale in Queenscliff and was bought by David Stewart as a weekender for fishing. Long-time Sorrento sailor Barry Dawes remembers accompanying David to pick her up and says she certainly bore the marks of a well-worn fishing boat, but was suitable for what David wanted. David was not a sailor, but liked to motor her for family outings around the waters and beaches of Portsea, joining a flotilla of friends with their boats.

Custodian: Jack and Joe Pompei; 1980s
Custodian: John and Rohan Gaylard; 1980s – 1990s
After a time, the boat was next spied by Rohan Gaylard at Pompei’s Boat Yard in Mordialloc, Melbourne.  Here the Pompei brothers Jack and Joe ran a classic wooden boat building business along the Mordialloc Creek, near where it runs into Port Phillip. How they came by the boat is a mystery today, but they accepted an offer by Rohan and his brother John to purchase her sometime in the 1980s. The Gaylard brothers then transported her to Shepparton, some 164 km north of Melbourne, to work on her. Here she stayed for 10 years.

Custodian: John Gaylard; 1990s – 2019
By the 1990s, John, having bought out his brother’s share, brought Tarni back to Melbourne to be moored off Maribyrnong, and to continue the restoration. This was initially undertaken by brother Rohan, who was a skilled furniture maker, and his friend David Beazley, the son of fishing identity Dugga Beazley. They replaced the ribs and built a new top deck. Later, Tim Phillips of the Wooden Boat Shop took over the restoration, and has maintained her regularly to this day.

John Gaylard says he has always had a love for boats and sailing. He brought Tarni to Flinders in Western Port. Here he used Tarni for fishing with his family and friends, and participated in occasional races organised by the Flinders Yacht Club. He also purchased a mooring at Sorrento so Tarni could compete in races run by the Sorrento Sailing Couta Boat Club (SSCBC).

Around 2015, Roger Gordon skippered Tarni for about three to four years in races held by the SSCBC. Roger said she was lovely to sail. Her wide beam made her very stable to sail in all weathers. He noted that she still bore the signs of her fishing days when she would have been hoisted out of the water on to Lorne Pier to unload her catch.

Around 2018, Tarni was taken out of the water for a thorough maintenance and update by the Wooden Boat Shop. John said he had hoped one day his grandsons might take her on, but when this looked unlikely he reluctantly sold her.

Tarni appealed to us because of her classic lines, beautiful manner under sail, and the care taken by her previous (custodians) to maintain her condition. We wanted a smaller Couta Boat for short-handed family sailing adventures and to introduce our toddler to sailing, who slept through his first Division 2 race with Tim and Sally Phillips at the helm. Tarni moors off SSCBC and looks forward to many family adventures including race participation!

It is understood the name ‘Tarni’ is of indigenous origin and means ‘breaking wave or surf’.

James started sailing from the age of five at Blairgowrie and completed his first ocean race at 15 years old.

With a lifelong passion for sailing and being on the water, Tarni is our perfect family boat and we look forward to sailing and spending many hours enjoying the beautiful peninsula. Juanita has a passion for being on the water along with the dogs (Maisy and Jessie.) We are hoping to have a long connection with Tarni and meeting our fellow sailors.

Custodian: The Hannah family; 2022 – Present
Unfortunately, James and Juanita found they were not able to find the time to enjoy Tarni to the extent they had expected and in 2022 she passed to Peter Hannah and family. Having owned Couta Boats for more than 30 years they were looking for a smaller boat, requiring less crew and easier controls. After only a few sails on the Tarni they were delighted with the choice. The Hannah children; Tim, Kate, and Sam guided her to third place in the 2022 Portsea Cup and look forward to enjoying many more days on the water.