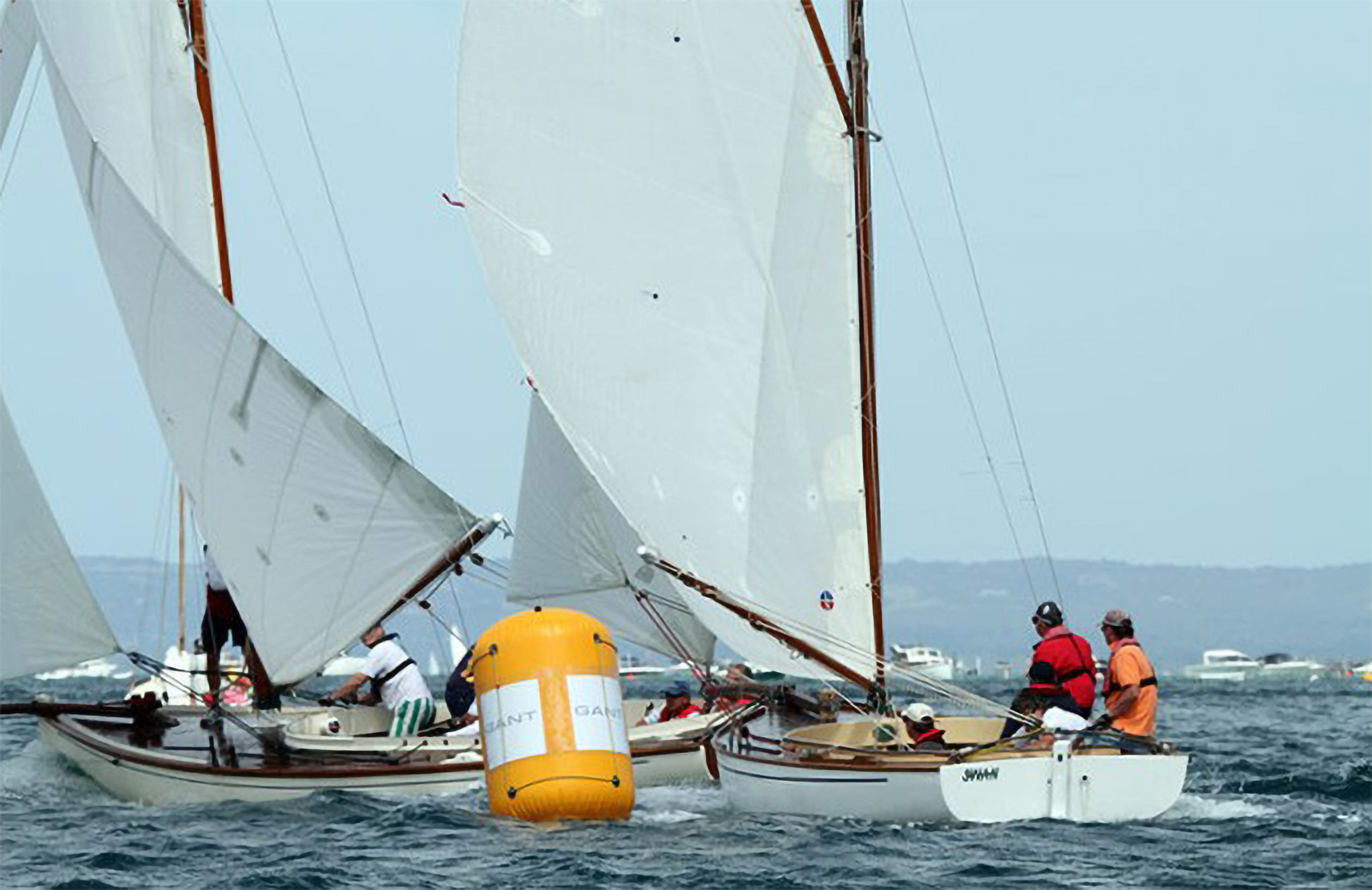 Early Years: c1940s – 2005
Swan is believed to be one of the earlier boats built by the Cayzer brothers at Queenscliff, Victoria. As the brothers purchased Peter Locke’s boat building business in 1947, Swan’s construction was possibly in the late 1940s or early 1950s.

The Swan then found her way to southern Tasmania where she was believed to have been utilised on the Derwent River. She bears a plaque: ‘Swan on Derwent’.

Some years later, Tim Phillips from the Wooden Boat Shop (WBS) in Sorrento was contacted by Swan’s owner in southern Tasmania, seeking advice on restoring her. Through the process, Tim periodically gave guidance, remotely. Eventually the boat was returned to Victoria for Tim to sell.

She was looking very ordinary!

After the purchase, the new owners immediately reconditioned her in the WBS yard, along with Tim Phillips. Included in the works were replacing a lot of the ribs, inserting a centre-board and plate, sanding her back and painting her, and rigging her in preparation for sailing.

Once the works were finished, Swan was competitively sailed in the Division 2 fleet out of Sorrento Sailing Couta Boat Club (SSCBC). But the arrangement of this sailing duo was short-lived. Due to his work commitments, Paul did not have the time to sail, so Bob Christie came on-board as crew and shortly after, he acquired Paul’s share.

Custodian: Bob Christie and Eric Dick; late 2000s – 2011
Eric and Bob successfully campaigned Swan for three to four seasons, and in that time Swan was a strong contender in the Division 2 fleet. In 2008, she won 1st Handicap, Division 2 in the CBA Portsea Cup, and according to her owners they should have won two more in subsequent years.

We should have won two more cups but in one race we broke our mast and in another race we broke the gaff when we hit a ferry wake; the boat went up and down, and the gaff went up and didn’t come down; it snapped in half. In another race, we were coming around the final buoy just before the finish line, and were ‘a mile’ in front, but we pulled the mail sail on too hard and snapped the boom in half.

Although they enjoyed good success in Swan, in 2011 Eric and Bob decided to join with David Birkill and his son Brett who had commissioned the construction of a new 26 footer: the now Sorrento II, originally Salacia, to campaign in the Division 1 fleet out of SSCBC. However, they still retained Swan.

Custodian: Eric Dick; 2012 – 2013
Eric’s time with Salacia, however, was short lived. After one season he returned to the smaller Swan, acquiring Bob Christie’s share to own her outright. Eric and some sailing mates continued to sail Swan in the Division 2 fleet for two more seasons.

Custodian: Julian Gerner; 2013 – Present
As a teenager, Julian spent time viewing and admiring Couta Boats on the water at Sorrento and retained a love of the vessel into his adulthood. And although he was not a sailor, when a ‘sea change’ brought him back to the area in 2013, he decided to purchase one. He walked into the WBS and announced that he wanted to buy a Couta Boat. Tim’s response was:

Right! What do you want one for?

Shortly after, Julian made an offer to Eric Dick to buy Swan, sight unseen. Swan was eventually moored not far from Julian’s Café Bar on the Sorrento foreshore, where he now keeps a daily eye on her.

On purchasing Swan, Julian decided he wanted to win the prestigious Portsea Cup, but he needed some serious mentoring. So as an introduction into the competitive world of Couta Boat sailing, he sought the assistance of champion sailor, Sam Phillips. Together they won the Winter Series, a sign for Julian that perhaps the Portsea Cup was attainable. But his dream became unattainable when Swan’s rudder snapped as they were preparing for the race. It was a failed campaign! Since then Julian’s business commitments have precluded him from sailing Swan, but he harbours ambitions on sailing her with his children in the near future.

In the meantime, Julian is keeping a watchful eye on Swan from his work premises and refers to her as being;