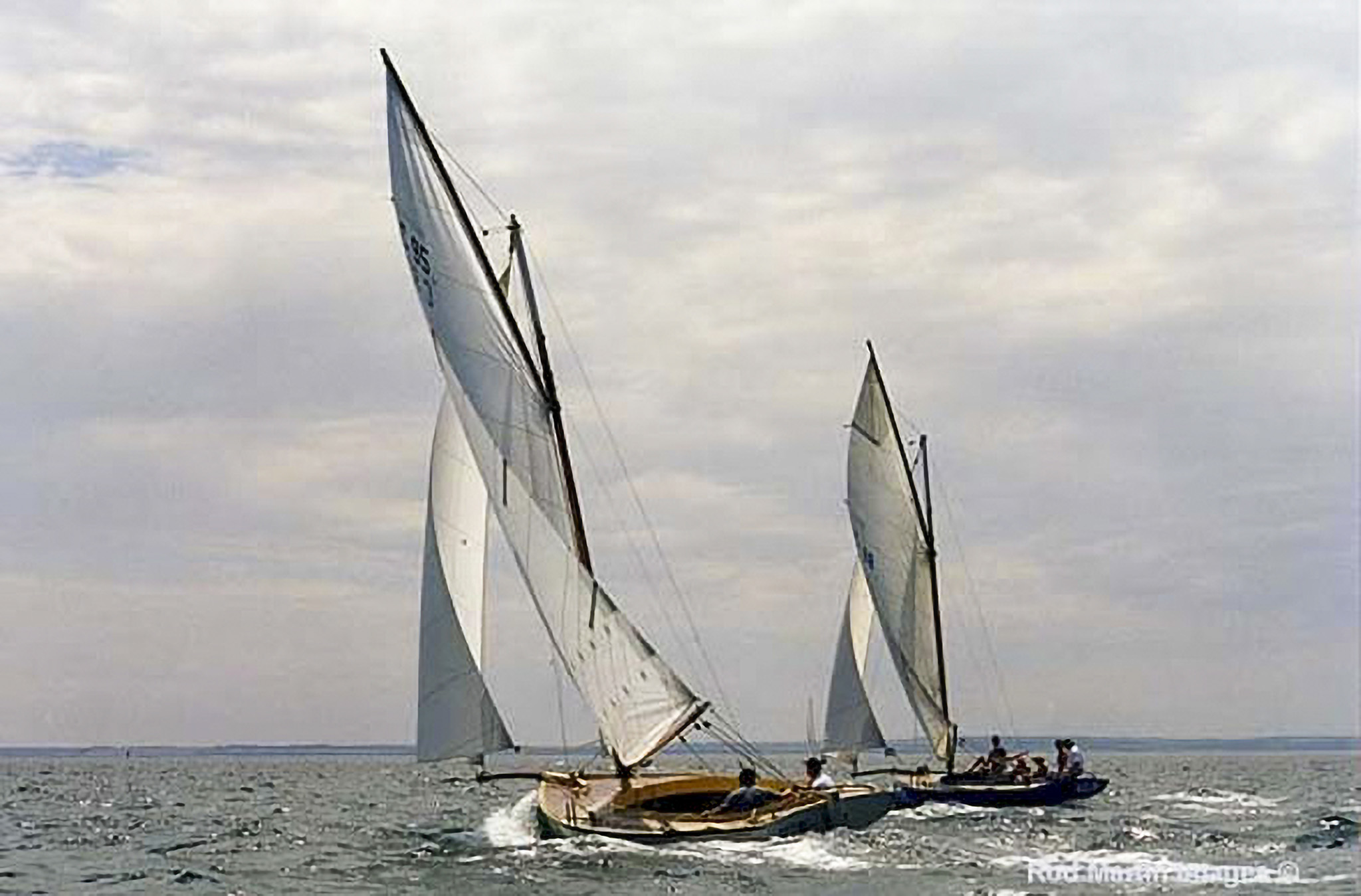 Built in Queenscliff by Gregory and Robert Nielsen

The Nielsen brothers’ interest in Couta Boats came through their involvement in the Queenscliff Maritime Museum’s boatbuilding program. Having seen the iconic Queenscliff Couta Boat, they decided to build a 26 footer knowing that the boat would be a lot more stable and relaxing than previous experience on-water in dinghies. They obtained a set of plans from Tim Phillips at the Wooden Boat Shop (WBS) in Sorrento which were based on Tim’s design and plans of Couta Boats Jennifer and Whisper. During the build Greg and Rob made periodic trips to the WBS with pen and paper to check if they were on-track. The construction was undertaken in a residential shed at 10 Bay Street, Queenscliff, Victoria but the confined space created some technical difficulties:

You can never get back and see if the lines look ok. I lofted it full size on the floor to try and minimise any error. Scaling everything with my trusty 12 foot vernier off Tim’s plans was the best I could do for a first time builder. One side was very close to the wall. The iron bark chafing batten had an extra metre scarfed to the end. As we slowly encouraged into shape, the joint suddenly snapped near the stern, pinning Rob’s head against the wall.

Against the odds, the boys finished the build and Swan Bay was launched in 2000. Even today Queenscliff identity Jack Beazley declares that:

Whoever owns Swan Bay now, will have her forever, for she is such a well-built boat!

Once launched, Swan Bay joined both the Queenscliff and Sorrento Couta Boat fleets. The Nielsen brothers sailed every weekend, always enjoying the sail. But as so often happens, work commitments consumed more of their time, to the point that Swan Bay spent more time in the marina than being active on the water.

Custodian: David Currie; c2014 – 2018
It was around 2014 that David Currie showed some interest in joining the Sorrento fleet. A lifelong member of the Blairgowrie Yacht Squadron with many years of sailing Etchells, David was first introduced to “Coutas” and the Sorrento Sailing Couta Boat Club by Nick Williams on Wagtail. He came to realise that under the ‘sea of grey hair’ there were many ex-Etchells and ocean racers that he knew racing on Couta Boats out of Sorrento.

With Swan Bay in the marina in Queenscliff looking for a new home and following Tim Phillips suggestion, David purchased her and set about getting her race ready. After an extensive service by the Wooden Boat Shop and a new set of sails and rigging, she was ready and looking beautiful once again.

David raced her for a couple of seasons out of SSCBC. He handled her well, but in the highly competitive racing at Sorrento he was looking for that extra competitive edge. So in 2016, Tim made him an offer to trade in Swan Bay for a new regatta boat; the trade-in resulted in Bella being constructed.

Swan Bay was kept in the shed at the Wooden Boat Shop for a couple of seasons until a new Custodian could be found. In 2018 a buyer from Sydney who was looking for a ready to race Couta Boat flew down to inspect her – Steve Batten purchased her and arranged for her to be shipped north.

Custodian: Steve Batten; 2018 – Present
Steve spent his childhood racing Lasers, 470s and Windsurfers in the warm waters of the Middle East, where expat life was centred around the sailing club. Later in his teens, his love for traditional classic wooden boats was ignited when he crewed on the famous gaff-rigged pilot cutter Jolie Brise helping to deliver her from the River Hamble, Hampshire to Bristol, England. Despite spending a night out in the English Channel in gale force winds he was not to be deterred. So when by chance he saw Couta Boats racing on Sydney Harbour in the Gaffers Race he decided it was time to take the plunge.

On her arrival in Sydney, Swan Bay was launched at the historic Woolwich Dock and found a home moored in Iron Cove, from where she regularly competes in the local racing at Balmain Sailing Club and ventures under the Harbour Bridge to join a small and growing fleet of ‘Harbour Coutas’ that race together several times a year.

In 2019, in her full first season of sailing on the Harbour, Swan Bay won the Thistle Cup – a great surprise for a skipper and crew who are all relatively new to the Couta Boat racing world.