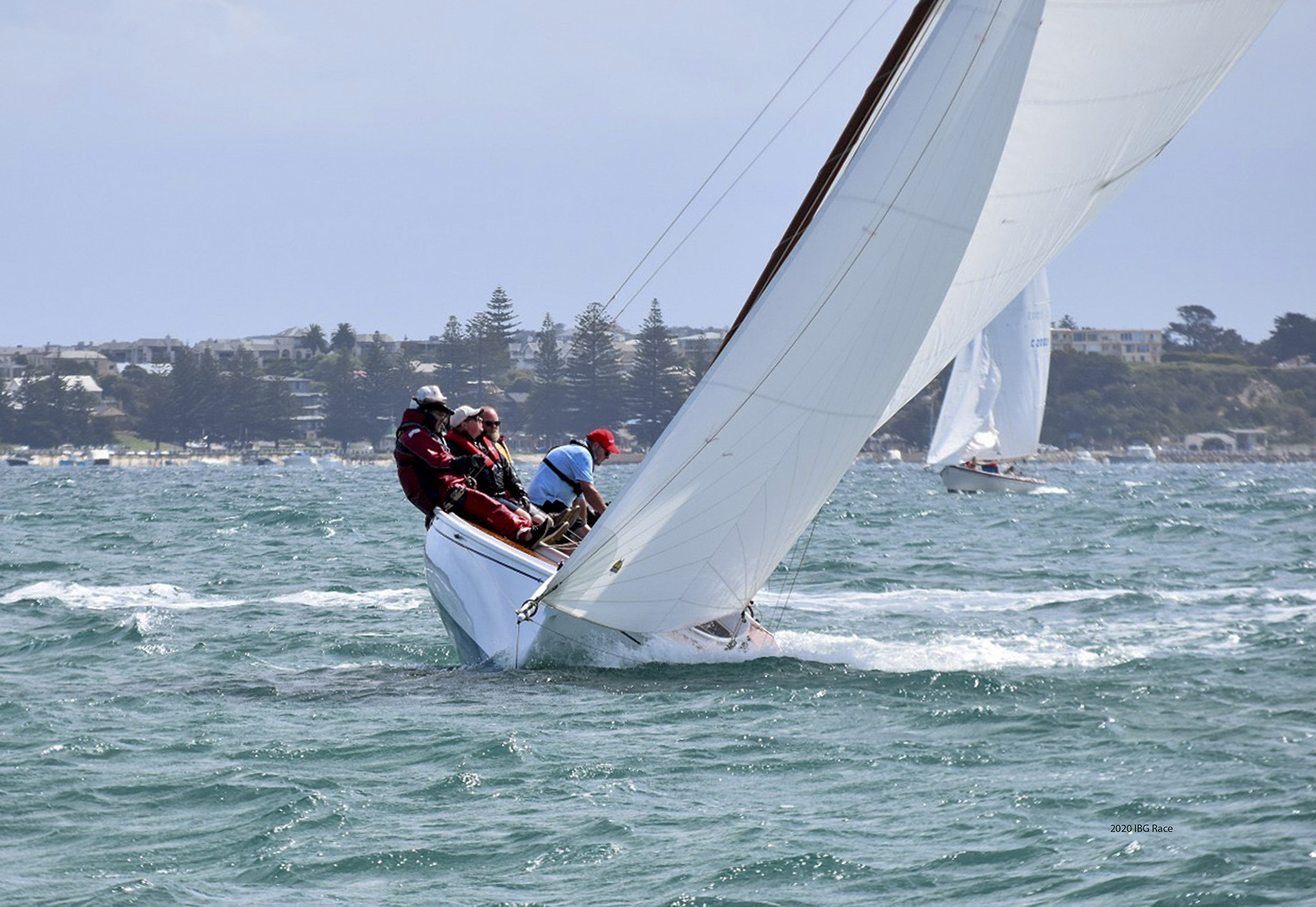 Custodian: Brett Birkill, David Birkill, Robert Christie and Eric Dick; 2011 – 2014
Sorrento II, originally named Salacia, was built in 2011 by Mark Abbott of Corsair Boats in Rosebud, Victoria. She was the second Couta Boat built by Corsair Boats. In 2010, the original plans were for Salacia to be built at 28 foot. But, to comply with the regulations of the Couta Boat Association (CBA), it was agreed to build her to the standard size of 26 foot 6 inches. The plan was for a very light-weight, line honours race boat.

Salacia has a similar hull shape to Nepean, but she is a little shallower in the bow. The hull and deck are built from King Billy Pine, being a native timber. Mark Abbott, Peter Gale, Bernie O’Hanlon and Stan Martin (staff) travelled down to the timber yard in Queenstown, Tasmania to source the timber from Bern Bradshaw, a lumberjack. Salacia should be around for a long time; she can be out of the water for six months and be as dry as a bone after going back onto her mooring, the native timbers are very stable and don’t swell.

In December 2013, David Birkill and Ollie Manfield sailed Salacia up Port Phillip to Sandringham Yacht Club for Sail Melbourne, the ISAF Sailing World Cup. It was light weather and ‘Gado’, a crew member that day, turned to Ollie saying:

An exhibition event for Couta Boats was organized, and under very light breezes off the SYC, Salacia won the event, using an underweight coarse jib sheet to allow the jib to set fully under such light conditions. A photo taken of C2011 crossing the finish line was used to promote the event for the next year.

The next day, under northerly gale force winds, David, Rob and the crew set off in Salacia from the safety of the Sandringham Marina to her Sorrento swing mooring, setting only a storm jib with a large following sea.

Custodian: Ken Vaughan; 2014 – Present
One week later, Salacia was sold to Ken Vaughan. Ken changed her name to Sorrento II. Since the purchase, Ken has campaigned Sorrento II in the Division 1 fleet out of SSCBC, in which she has been a consistent performer.

In 2020, Sorrento II won the Portsea Cup. And it was Ken’s 17 year old son Lochie who was on the helm. Lochie was always destined to have a career in sailing. He started sailing early at about age six in Optimist dinghies and participated in the training programs of the day. However, by age nine he was gone from the sailing world; the round ball game of basketball was the new big attraction. Quite often if you saw him at the sailing club it would be with a basketball in his hand.

But by age 15, Lochie was back on the water and honing his skills in Lasers. In a very competitive fleet he reached fourth in the Youth Championships. It was whilst on the water in a Laser that a wild looking boat caught his eye and by age 17 he was gone from the Laser fleet. This time the high performance Waszp was the big attraction after he was in introduced to this class by his cousin. He soon had another standout race in the Victorian Youth State Championships.

While all this was happening, Lochie was, from time to time, jumping on his dad’s Couta Boat; there was plenty to learn. In the Next Gen Couta Boat race conducted each January at the SSCBC, with tiller in hand, he scored 3rd place. He then sailed Sorrento II in the CBA Nationals in 2019 and his big day came at the Gant Portsea Cup in January, 2020. It was a light wind day. Ken said:

Lochie knew that he wanted to find clear-air near the middle of the start line. This worked just fine, but which way to go? There was no shortage of advice from those on-board. A leg out to sea in clear air and then a tack to inshore, saw Sorrento II change positions with the leading boats. Final places over the line with a shortened course were 1st Romy, 2nd Margarita and 3rd Sorrento II.

The next day at the Portsea Cup picnic at the Portsea Quarantine Station, the results confirmed what everyone thought might happen. At age 17, Lochie Vaughan stood on the podium in 1st place as the youngest ever winner of the Portsea Cup, and showed what young people were capable of achieving on a Couta Boat.

In the 2021 SSCBC Season, Lochie Vaughan was awarded the Mike Haigh Trophy for Best Young Clubman aged 16 to 25.