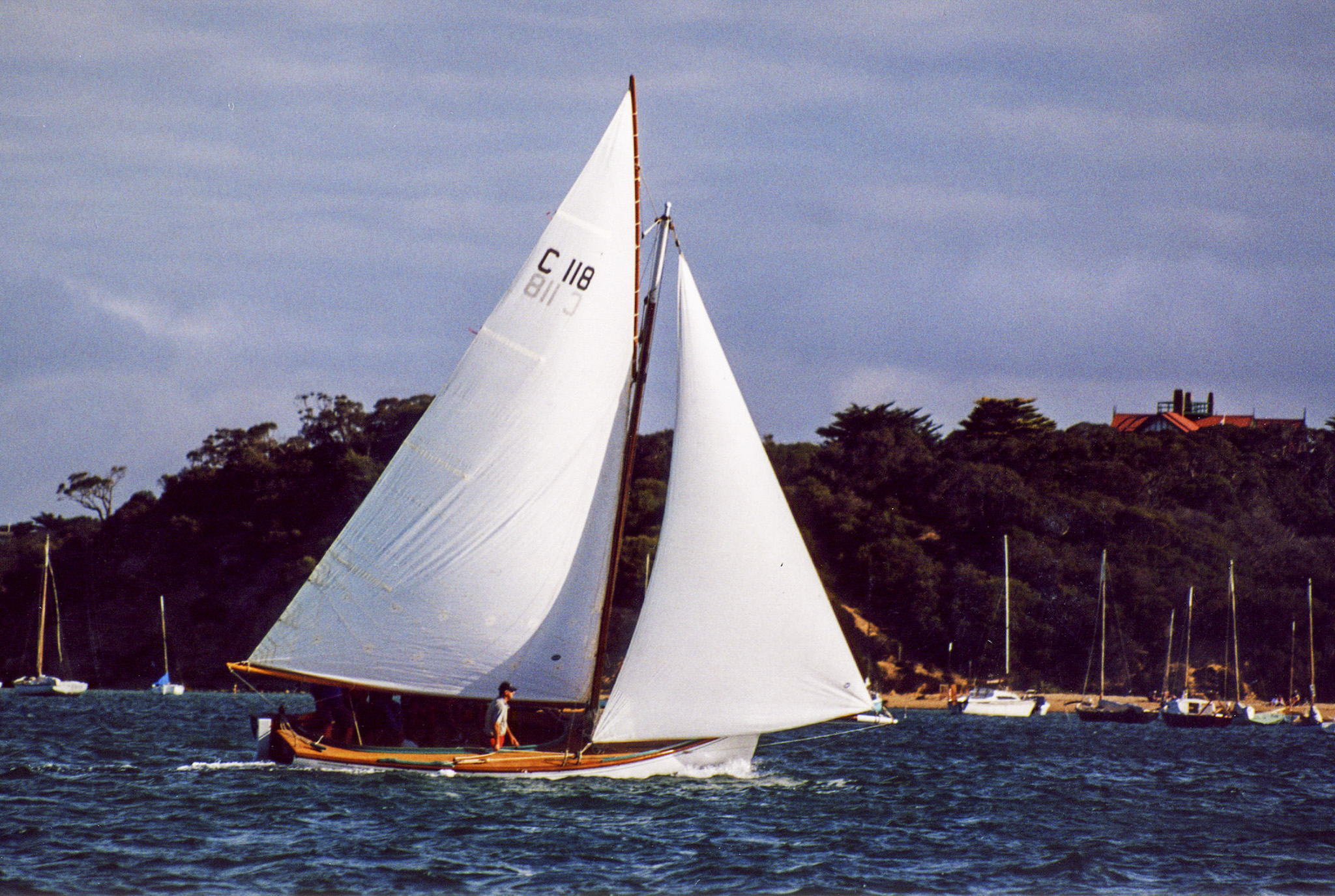 Custodian: Robert Pitt and Tony Westcott; 2000 – 2006
Sorrento was built at the Wooden Boat Shop (WBS), Sorrento by Wayne Parr in 2000, alongside the Cariad and Mary Bell. She was built for Robert Pitt and Tony Westcott. The three boats were all constructed of Huon Pine and styled along the lines of Wagtail C86, with maximum beam and minimum draft.

Over the next six years the owners sailed Sorrento in the Division 1 fleet out of Sorrento Sailing Couta Boat Club (SSCBC). Sorrento proved to be a high performer in an extremely competitive fleet. But after six years of regular sailing it was time for her custodians to sell.

Custodian: Peter Gale; 2006 – 2012
In 2006, former world champion and Olympic class sailor Peter Gale, who had owned and successfully raced Vivienne, purchased Sorrento. Knowing what was required for a high-performing boat, Peter liked the shape of the hull with its shallow draft and forefront foot. He knew he could maximise her performance in the fleet.

As an incentive to retain the former crew of Vivienne, Peter reconfigured Sorrento to enhance her performance; her mast and chain plates were moved forward to give the boat better balance. Ray Eades built new Sitka spars and the mast was moved by Mark Abbott of Corsair Boats. The re-rigged boat was easier to sail, resulting in a Line Honours and handicap Portsea Cup win in Season 2006. Sorrento C118 may be the only boat in the modern era to win both Line Honours and Handicap in the Portsea Cup Division 1 fleet.

In the following season, Peter elected to be a Race Officer at SSCBC and so arranged for Geoff Gadsden to take the helm. Geoff and the crew successfully sailed Sorrento for a few more seasons.

Custodian: Ken Vaughan; 2012 – 2017
After six or so years of successful racing, Sorrento was sold in January 2012 to Ken Vaughan. Ken continued to race Sorrento in the Division 1 fleet at SSCBC for three years until he purchased Salacia in 2014, renaming her Sorrento 11.

While Ken helmed his new acquisition, veteran Couta Boat helmsman Ollie Manfield successfully campaigned Sorrento through the next three seasons: of 2015, 2016 until January 2017. With Ollie at the helm and a very regular and highly skilled crew, Sorrento continued to be one of the top performing boats in Division 1. Ollie and his crew especially took delight when they outclassed Sorrento II with Line Honours, until Ken put more ballast in the boat. It was then that Sorrento II began to realise her true potential, also becoming one of the top boats in the fleet.

Custodian: Dick Whitaker; 2017 – Present
In January 2017, after previewing a few Couta Boats, seasoned sailor Dick Whitaker purchased Sorrento C118, on the premise that she was in top condition and had a credible racing history.

Dick’s interest in Couta Boats was sparked through his association with Will Baillieu back in the late 1970s, after Will had built Ajax. For a time Dick sailed on Will’s Ajax out of Williamstown, Melbourne and so came to know the distinctive features of a Couta Boat and its capacity for serious racing.

Following a move to the Gippsland Lakes in late 2016, Dick transported Sorrento to a pen in Beaches Marina at Kings Cove, Metung in East Gippsland. From here she is sailed by Dick out of the Metung Yacht Club.

Dick has raced Sorrento successfully in the regular fleet and in various regattas on the Gippsland Lakes. Sorrento won the Wooden Boat Series in the 2018 season. It has been said that many helmsman and crew in the fleet have spent plenty of time looking at the transom of Sorrento C118.

She is used occasionally for recreational sailing but fishing from her is off limits!

I would not like to see people cutting up whitebait on her deck.

This is a testament to Dick’s attachment to his boat, Sorrento.