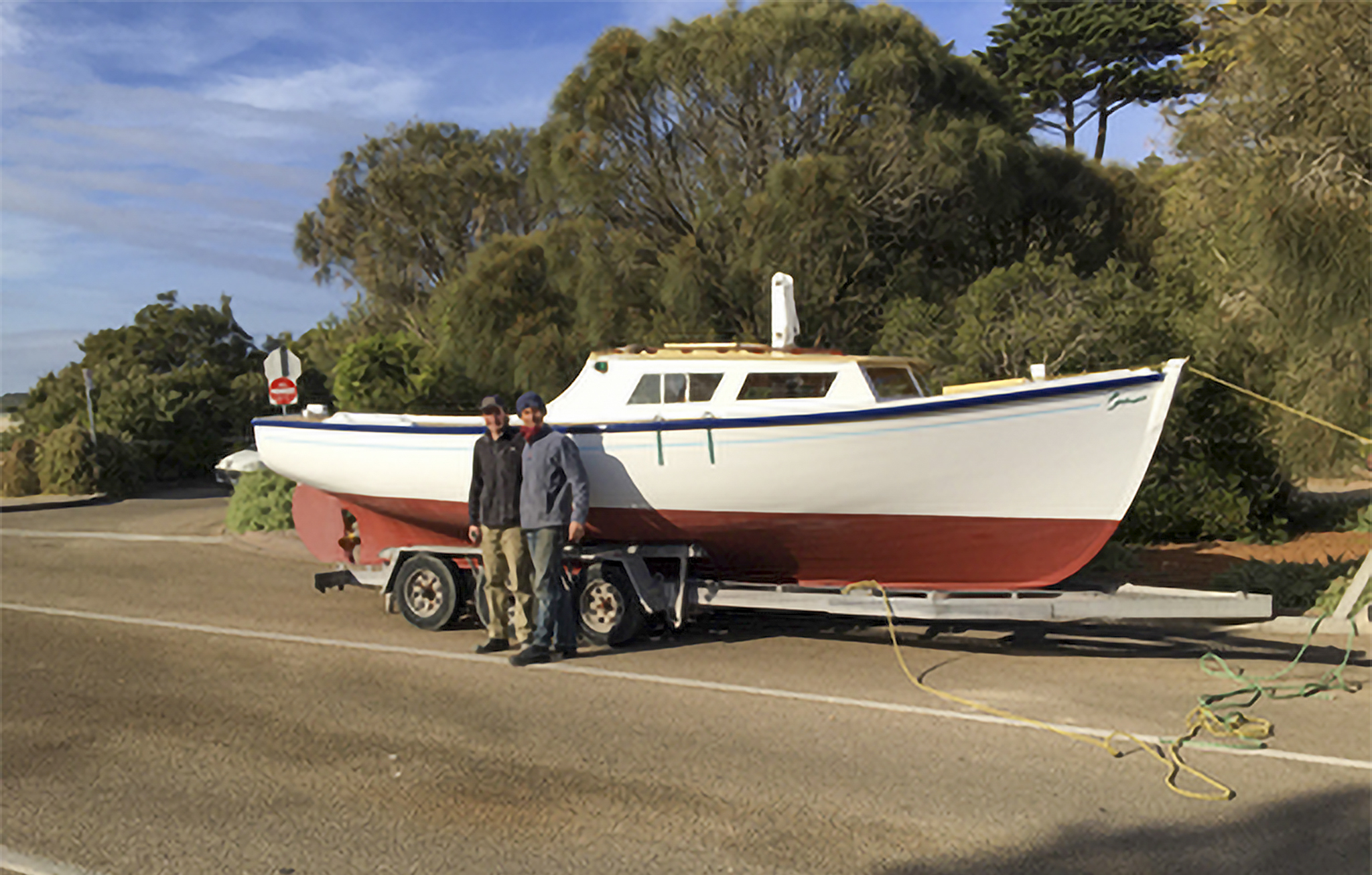 Custodian: Everard Baillieu; 1970s – c1990
The recorded history of Seabird does not commence until the 1970s when Everard Baillieu of Portsea, Victoria owned her. Seabird remained in the Baillieu family for approximately 20 years, during which time she was used as a family boat for recreation. When Everard’s daughter Sarah was married in 1972, she and her husband Robert McKay were gifted Seabird with the newly acquired registration of C72.

Custodian: Roger Kimberley; Early 2000s – 2018
Derick then sold her to Roger Kimberley in early 2000s. In 2018, Seabird was sold to Anthony and his son Christopher Johnson.

Custodian: Christopher and Anthony Johnson; 2018 – Present
Chris says that as long as he can remember, Seabird had sat patiently in a boat lifter at the end of a private jetty off Lentell Avenue, Sorrento. He tells he often rowed his clinker dinghy underneath her on summer afternoons.

My first time on the boat was with Will Phillips in late 2017 when we were asked by the then current custodian to launch the boat for the season. From that moment on it cemented to me that this boat was perfect, and one day I would like to buy it. The restoration has been the most rewarding thing I have ever done. While some things were hard, I loved every second of it, and I think it brought Dad and me closer together. Now that Seabird is finished, I am looking forward to relaxing and spending a time out on the water enjoying the boat with friends and family.

In 2018, Anthony was walking through the yard at the Wooden Boat Shop, Sorrento, with his son Christopher when Christopher said:

Dad, see that boat over there, that’s the Seabird. It sank on the mooring the other day, and the owner is going to do some repairs and get it back in the water. I have always liked that boat and one day if it came up for sale it would be a great boat to own.’ ‘That’s nice’ Anthony his father said, and they continued on their way.

A week later, Anthony received a message from Wayne Parr. The Seabird is for sale. I know Chris loves that boat and it would be a great project for him and you. Anthony had no intention of owning a boat of that size, considering Chris and he had just recently purchased the sailing clinker dinghy Elizabeth Claire and had done a fair bit of cleaning and painting to get it back into the water after years of it sitting idle in a yard in Portsea.

Anthony says that it was kind of Wayne to think of Christopher, so he thought that he should at least discuss it first with Wayne, then with Chris. Wayne said it was going to need a fair bit of work but it was a great boat. Christopher’s love of wooden boats and increasing skills learnt from countless hours helping his great uncle, Chris Sinn with Rip and then Jane, meant there was a chance they could do a lot of the work themselves. Anthony called Christopher and told him Seabird was for sale. Instead of excitement the phone was silent. Anthony asked why? Christopher said:

Dad, I was hoping that would come up for sale but I never imagined it would be now’. Anthony said, ‘Well it is. If you want it, we need to act right away’. ‘You ring the owner and see what you can do.

A purchase was made and the process began. The usual renovation discussions began with reality sitting in in one corner and dreams and plans in the other. Ok, it’s August, and Anthony thought that they could do stage one and be in the water for Christmas then do stage two during next winter. Decisions had to be made. Do we leave the plate case in, do we take it out? Do we just do a few rib repairs or just the worst ones? What about the rot in the cabin? Is this toilet staying in? Are we painting under the bunks or the whole cabin?

This was turning into a monster project.

Chris, we need a clear plan and a division of labor. This is your boat you are the boss and the project manager, you decide what we do and you do all the skilled wood work. I will pay bills and do all the unskilled jobs.

A few months and a quick fix to get her floating suddenly turned into a two-year full blown renovation where nothing was untouched from stem to stern. Anthony had lost count of the weekend hours spent sanding and heat gunning paint off the boat and the hours putting it all back on again. Christopher’s goals for the Seabird expanded as the months passed as did his skill in his work on her.

During this time Christopher started his wooden boat building apprenticeship at the Wooden Boat Shop, Sorrento and the mentoring, support and skills gained from Tim Phillips and Wayne Parr were greatly appreciated and the results were soon apparent in Seabird. In the final months leading up to the launch, Christopher worked so hard he barley left the boatyard. He would finish work and then jump straight onto Seabird for another four or five hours, then be back for full days on Saturday and Sunday.

The result has been a magnificent restoration. Wayne and Tim were right; Anthony and Christopher were able to do all the work themselves with the exception of the electrical works. They left that to Chris Dury.

For Anthony, Seabird has been more than a restoration of a beautiful boat back to its former glory. It was the opportunity of a lifetime to share a passion and so much time with his son. It is a rare thing and Anthony treasured the time with his father Chris as much as the work itself.

Another chapter in the Seabird’s history is now complete. She is back in the water and the next chapter begins.