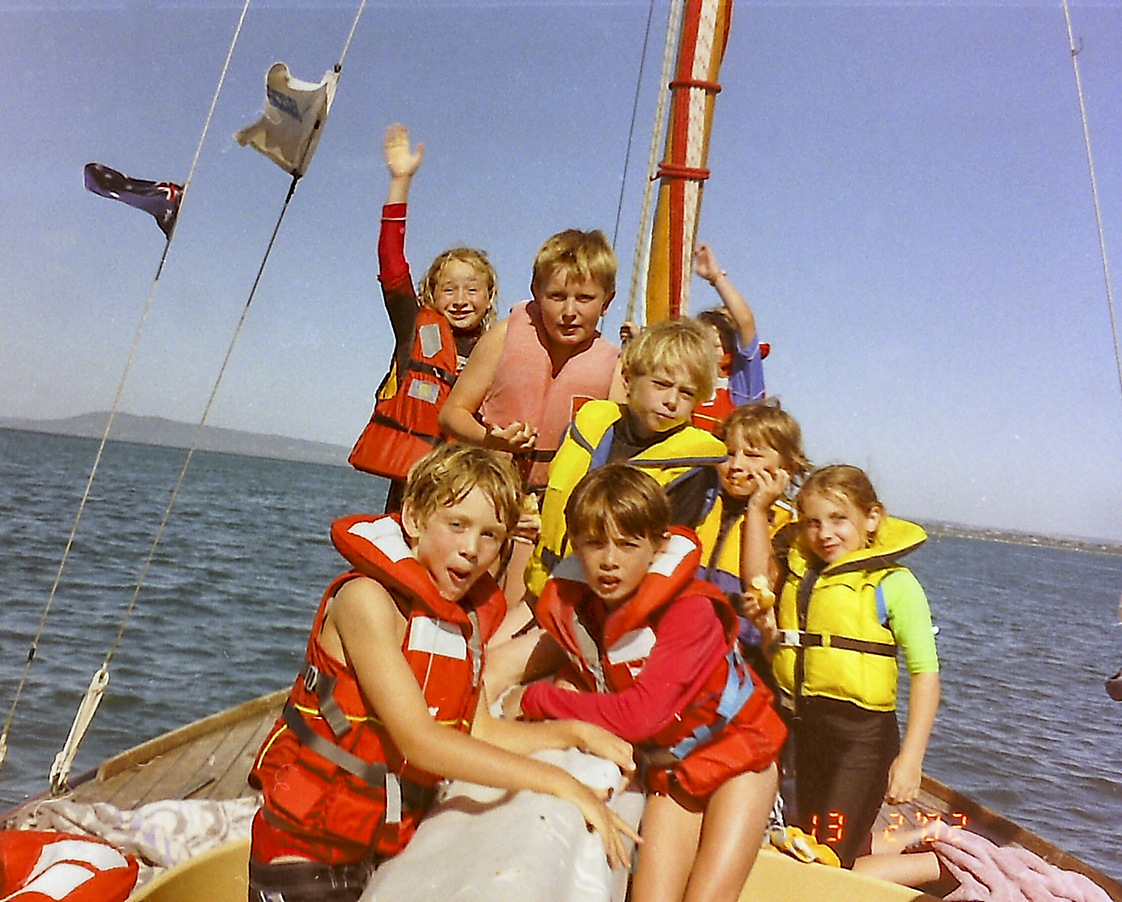 Early Years
It is believed that Sarah was built by C Blunt Boatbuilder in Williamstown, Victoria, circa 1935. Her original owner is unknown.

Little is known of Sarah’s early history. However, Gary Edwards, a local from Barwon Heads in Victoria, reports that she was owned by the Lawn family and was used to fish the local waters of Barwon Heads, dating back to before World War II. The family then sold her to a local whose name is unknown.

For many years, the boat sat in the backyard of her then custodian until Gary Edwards came upon her in the early 1980s. The owner was happy to off-load her to Gary.

Custodian: Gary Edwards; Early 1980s – Late 1980s
As Gary grew up in Barwon Heads and fished as a young lad, he had an ongoing interest in boats, but the task of restoring this derelict Couta Boat presented an enormous challenge. He conferred with Tim Phillips in Sorrento and also Jack Beazley in Queenscliff on matters relating to construction and restoration.

Through this process, Gary developed a particular interest in the design and performance of the Couta Boat. He used a variety of timbers in the restoration, including: Hard Meranti, Jarrah and Blackwood to replace some ribs, and Oregon for the decking. Gary completed the process in 1985 and named the boat after his eldest daughter, Sarah.

Gary used Sarah for both fishing and sailing for approximately three years. However, his interest was in fishing more so than in sailing. For a time, Sarah provided Gary with the opportunity to pursue both pastimes, but he decided he wanted to build a Couta Boat from scratch. So in the late 1980s he sold Sarah to Andrew Myer.

Custodian: Andrew Myer; Late 1980s – 1996
Andrew and his brother Philip sailed Sarah from Barwon Heads to Queenscliff and carried out some repairs. Philip, who was an experienced sailor and also an owner of a few Couta Boats over the years, was well equipped to maintain the boat and teach Andrew to sail.

Andrew owned Sarah for approximately six years until he sold her in 1996 to Sorrento sailor Darren Hart.

Custodian: Darren Hart; 1996 – 2002
Darren sailed Sarah out of Couta Boat Club for a year or more until he discovered worms in her centre-plate. He realised that Sarah required a major overhaul, which was carried out in the Wooden Boat Shop yard, Sorrento.

After the repairs were completed, Darren and his able crew of Bernie O’Hanlon and Neil Maney set about maximising Sarah’s performance in regular competition. One of the many highlights was winning the Around Mud Island Race and having their winning plaque featured on the Queenscliff – Sorrento Ferry. She was often out in front of the fleet by a long way, but her handicap worked against her.

In early 2001, Sarah, along with 10 to 15 Couta Boats, sailed from Sorrento, through Port Phillip Heads and around to Newhaven located on Phillip Island, to compete in a Fishing regatta. The regatta was instigated by boatbuilder Ken Lacco who resided in Newhaven after spending his early years building Couta Boats in Rosebud.

The journey was undertaken before electronic charts and equipment was available for use onboard; Darren thought he might have had a Melways Directory onboard! The crew had to rely on their wits to navigate through Port Phillip Heads and around into Western Port, where tricky tidal forces, shallows and mud bars were a particular challenge for these sailors used to the inland waters of Port Phillip.

After a very slow start in the regatta race, Sarah then blitzed the field to win the Regatta Cup. Her stunning success was due to having local San Remo fisherman and boatbuilder Billy Mitchell onboard. Because Billy fished the waters he knew every mud bar; he directed the helmsman to hug the mudflats so as to catch the water as it came off the mudflats. This decisive strategy gave Sarah a massive advantage, passing five boats in the final leg to the finish line.

Darren competitively sailed Sarah in the Couta Boat fleet for six years until he sold her to fellow SSCBC members Bob Brown and Alex Zadnik in February 2002.

So began a new period in Sarah’s history. And for experienced keel boat sailors, Alex and Bob, sailing a classic fishing boat rigged for competitive sailing was a vastly different experience; it demanded a different understanding of the art of sailing.

This was brought to bear later in the year when sailing in a stiff breeze in the Portsea Cup race – Sarah on port collided with Fiona who was on starboard. Her helmsman on that day, although experienced in ocean racing, did not anticipate the slow response of the boat. However, the experience was looked upon as another milestone for the owners and crew in becoming proficient sailors of a classic boat.

In the following year, Bob Brown sold his share in Sarah, leaving Alex as the sole custodian.

By trial and error, Alex and his crew initially learned some hard lessons, one being in 2007 when Lucy clipped and sheared off Sarah’s rudder while fast-finishing Vivienne captured her bowsprit, leaving Sarah to limp back to her mooring. Within a few years, though, Alex had an accomplished crew who were both experienced and knowledgeable, including: Greg Hill, Ben Incani, Frnk Incani, Phillip Louey, Jenny O’Donahue and Stephen O’Conner.

Long term crew member, Frank attributes Sarah’s success to her helmsman and crew understanding the need to constantly fine-tune the boat as she reacts to the wind and tidal forces. Frank, who was still sailing regularly at the age of 80, declares:

In particular, Frank loved the annual KPMG Regatta when visiting guests came on board to experience and talk about Couta Boats.

Alex and his crew have continued to sail Sarah in the Division 2 Fleet. They were successful in winning Line Honours and Handicap in the prestigious Portsea Cup in January, 2015 in 20 to 25 knot winds and using Sarah’s old No 2 jib. Another successful win, on handicap, was the 2019 CBA National titles conducted over two days.

In the time of Alex’s custodianship, Sarah has undergone several refurbishments including: a new jibboom, rudder, centre-plate and mast. All maintenance on Sarah is undertaken by the Wooden Boat Shop in Sorrento.

Sarah is moored off SSCBC jetty at Sorrento.