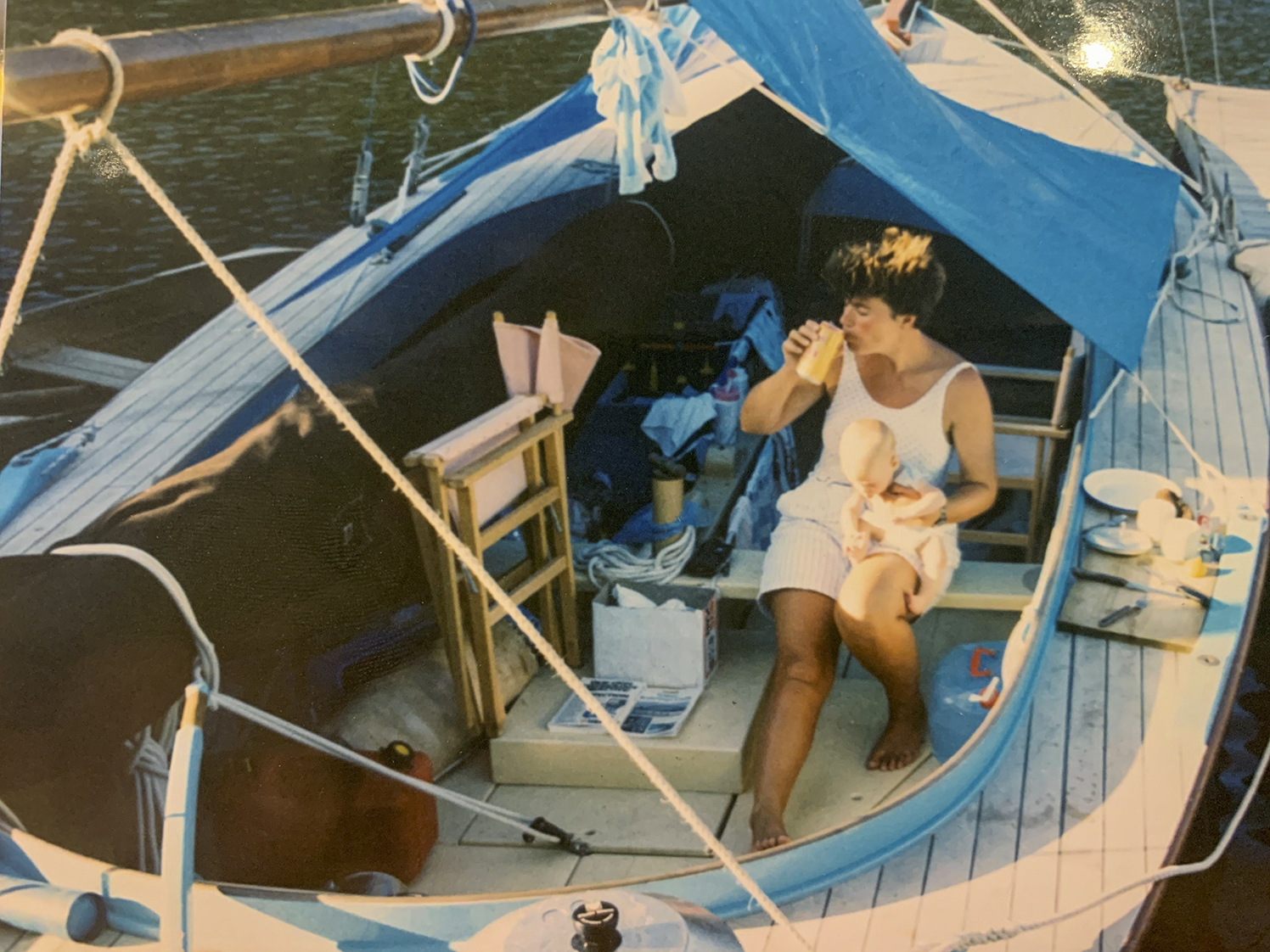 Custodian: Tim Phillips; 1982 – 1983
Sally was designed by Ken Lacco at the request of Tim Phillips in 1981. The hull was built by Ken and Tim at Newhaven on Phillip Island, Victoria and was then transported to Delgany Avenue at Portsea for completion. The build marked Tim’s induction into building Couta Boats; the first of what became a life-long commitment to boat building and provided a wonderful mentor in Ken Lacco who taught Tim how to make it possible.

Her hull, ribs and deck are of Celery Top Pine and her keel is Yellow Stringy Bark. She was completed in 1982 and named after Tim’s then girlfriend and now wife, Sally Phillips. Built prior to the period when the length of newly constructed Couta Boats became standardised at 26 foot 6 inches, her length is 28 foot 4 inches, making her the longest boat in the local Sorrento Division 1 fleet, although not the longest boat with ‘couta lines. She carries around two tonnes of lead ballast and is powered by a Yanmar 3GM 30 motor.

In the 1980s, the Couta Boat Club did not have a shore base; races were hosted by clubs around Port Phillip. Sally was a regular competitor, skilfully skippered by Brian Boulton, brother-in-law of David Baillieu. For most of these years she was unbeatable.

We had an incident at the start of a Petersville Series race when we were 30 seconds from the start gun, creeping along the ‘right’ end of the line for a great start when a jibboom from a nameless following boat, came over the stern deck between me and the helm. The offender then slowly luffed up, the bowsprit sweeping me over the windward side of the boat and overboard into the water, as I asked our mainsheet hand Robbo, to take the helm. The offender then kindly plucked me out of the water and had me back on Sally all within one minute. No damage done to anything.

He also recounts the time when Sally’s crew swooped up a haul of barracouta, but not in the traditional practice of a ‘couta fisherman. Sally and several other Couta Boats were to accompany, as a safety back-up, some keen dory rowers who planned a row across The Rip to Queenscliff.

The weather was deemed to be not ideal so the row was called off. As we motored back past the Quarantine Station, we came upon a school of around a dozen hungry dolphins herding schools of barracouta onto the beach, and right out of the water in their effort to escape being eaten. We put a couple of people ashore with plastic buckets and they scooped up a good haul of ‘couta. Subsequently an impromptu BBQ was held at the Boycott family home in Sorrento.

Brian reports that David made a real effort to look after Sally’s crew, providing Sally T shirts, Sally rugby tops and, in some years, a wineglass etched with Sally’s profile and date. As a result of Dave’s efforts we maintained a pretty regular and experienced crew for many years. David often sailed on Sally in collar and tie. He owned Sally until 1998 when he sold her to Peter McKeand.

Custodian: Peter McKeand; 1998 – Present
For over 20 years, Peter has sailed Sally in the local Couta Boat fleet, initially out of the Couta Boat Club then the merged Sorrento Sailing Couta Boat Club. She has an outstanding race record, having won the Portsea Cup three times on handicap and innumerable other races, particularly Passage Races in bigger winds, where she can use her length and stability to her best advantage.

Peter attributes her durability to her length and sturdy hull.

A memorable incident in one Passage Race is testament to Sally’s robust on-water performance. At the end of a Round Mud Island Race out of Queenscliff, Port Phillip which started in 15 to 20 knots but finished in 30 +, Sally was leading the fleet with Rhapsody just behind.

With one last gybe mark at the Pilot Jetty to go, we had to decide whether to sail past the mark then tack and gradually bear away to safely get around, rather than risk a gybe. It goes without saying that we gybed! The mark was a huge steel channel marker and fortunately bold Sally survived the gybe. But for her helmsman, there was a salient lesson. The mark should now have been on our starboard side but there it was on our port side. We had gybed so well we turned inside it rather going around it. So we had to do it all again. We must have missed it by inches. I think even Sally wouldn’t have liked hitting it.

Sally continues to be competitive in the Division 1 fleet and remains a well-loved boat.

What a great time she has given us, and with our wonderful crew the joy continues.