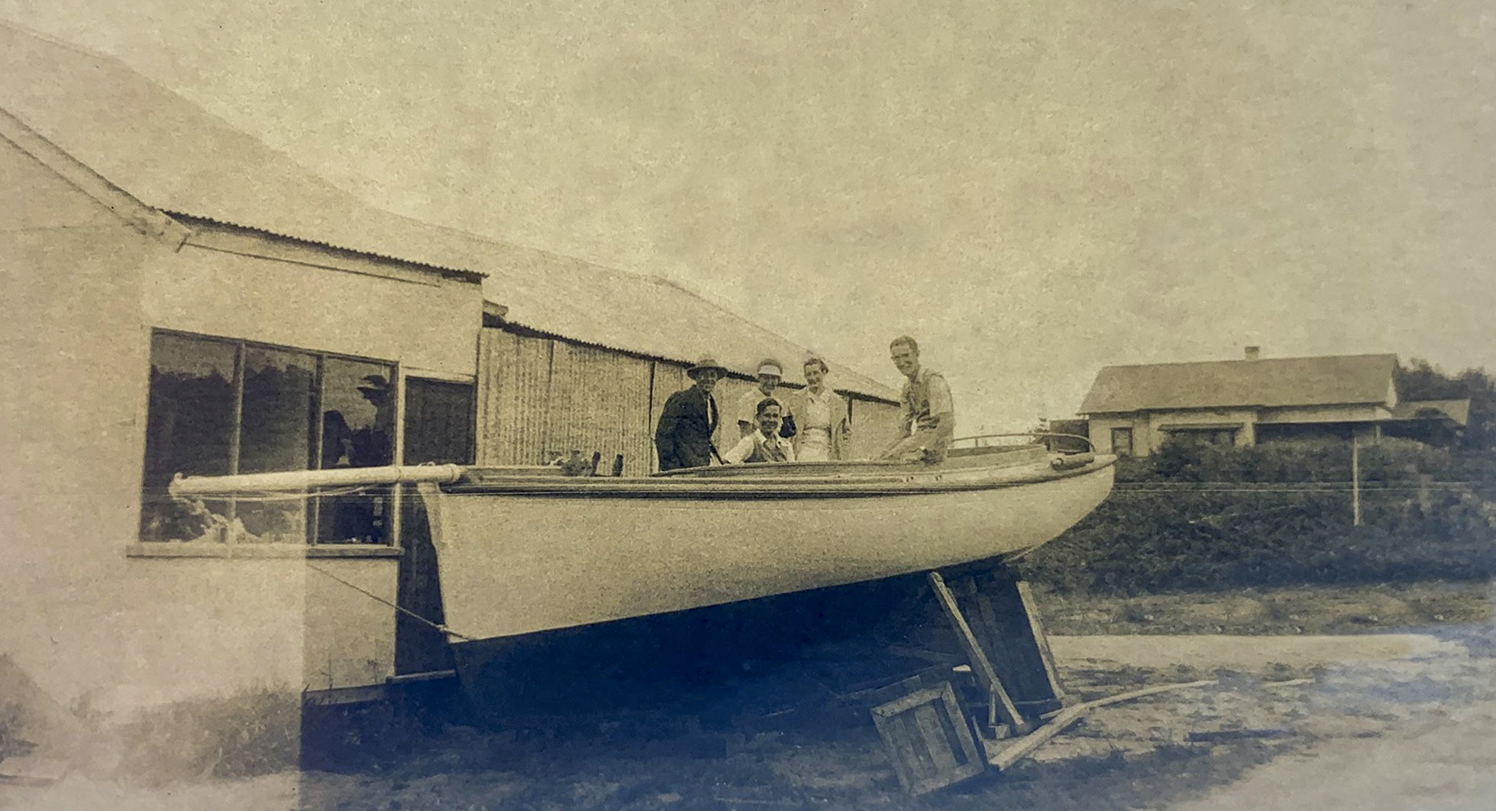 Custodian: Mr. Mulhall; 1936 – 1941
Ruby Anne was built by Ken Lacco of Rosebud, Victoria for Mr. Mulhall of Ringwood a suburb in Melbourne and launched in 1936. She still retains the K M Lacco (Kenneth Mitchell Lacco) brass plaque as the Lacco insignia. Constructed from New Zealand Kauri, she was built as an open pleasure boat with a small cabin and rigged as a Bermudan sloop.

Little is known of the location of Ruby Anne in her early years, but a series of letters provides some curious details about a sale transaction of Ruby Anne in the early 1940s. The correspondence highlights the impact of the National Security Act of 1939 on Australian citizens, including boat owners.

Custodian: H Chaston; 1941 – Unknown
The letters reveal that in 1941 Ruby Anne was moored at Williamstown on Port Phillip. Mr. Mulhall placed a ‘For Sale’ advertisement and H Chaston of Mount Gambier in South Australia expressed an interest in becoming her next custodian. A key criterion was:

I could place a couple of bunks in so that my wife and I could go down occasionally and spend a few days fishing. (Personal communication, Nov 20, 1941)

Arrangements were made for Ruby Anne to be purchased by H Chaston and shipped by train to South Australia. The deposit for the boat was £50 and another £125 on possession. Her specific destination was the Glenelg River some twenty odd miles from Mount Gambier. For Chaston, the Glenelg River was the ideal paradise for fishing.

90 miles of navigable water, starting from the mouth at Nelson and working up as far as Dartmoor. Fishing on the river at times is very good – bream, perch and mulloway are the main fish we catch. (Personal communication. Dec, 3, 1941)

However, the Nation’s Security Regulations intervened. In the midst of the sale transaction of Ruby Anne, the Australian government in early 1942 prohibited the transportation of all unessential goods; all road transports were cancelled and the railways were under strict regulations to not carry any unessential goods. Furthermore, H Chaston revealed that he was advised by the firm dealing with the shipment to hand the boat over to the Coastal Patrol Commission, which was controlled by the Australian Navy for the duration of the War. The terms were:

The boat is maintained and cared for free during the war, after which it will be handed back…if I supply the boat, the firm will supply the crew of qualified men. (Personal communication. Dec 29, 1941)

H Chaston did not adhere to the firm’s suggestion. Instead, he requested that the firm arrange for a couple of chaps to sail the boat from Melbourne to Port MacDonnell, SA, which was 16 miles from Mount Gambier. He believed that he would then have no difficulty in getting Ruby Anne to the Glenelg River. In the interim, Chaston sent a message to her previous owner Mr Mulhall asking if he could check on Ruby Anne on her mooring at Williamstown, advising him to help to protect her from vandals:

I think I should have a new piece made, don’t you? …take off the steering wheel, winch, anchors, and put them inside the cabin to safeguard them from vandalism? (Personal communication. Dec 15, 1941).

When Ruby Anne was eventually transported by goods rail in early 1942, Chaston’s anguish was compounded further, having discovered that the firm had withheld the boat’s mast, sails, a mattress and propeller. Chaston took action immediately:

I wrote to the Criminal Investigation Branch and took the matter up. And three of them interviewed the ‘Firm’, and I received an offer from the CIB in which they stated that they had inspected the items not sent and that they were sold, and all the bins would be handed over. (Personal communication. May 4, 1942)

Chaston also discovered that the ‘Firm’ had possibly kept one of his propellers and replaced it with an old one.

Custodian: Peter Kubale and Roger Wischusen; c1987 – c1990s
She was in reasonable condition, having been set up as a river boat with an 8 cylinder Ford petrol motor. Local Sorrento sailors Peter Kubale and Roger Wischusen became the next custodians for $8,000. Noske transport from Portland floated her to Royal Brighton Yacht Club (RBYC), losing a small flying windscreen as she crossed the West Gate Bridge in Melbourne.

The restoration commenced on the boat at RBYC and a Yanmar motor was fitted, but the bulk of the work was undertaken by the Wooden Boat Shop in Sorrento. Once restored, Ruby Anne joined the Couta Boat Club’s growing fleet. A notable success was winning the 1990 Portsea Cup and sailing with good success in the Petersville Series.

Custodian: Roger Wischusen; c1990s
When Peter Kubale decided to commission the build of Kathleen Mary, he sold his share in Ruby Anne to Roger Wischusen.

Custodian: Tony Beddison; c1990s – 1995
Roger continued to sail her in the Couta Boat fleet until he sold her to Tony Beddison.

Custodian: Trevor and Marie Weir; 2014 – Present
In December 2014, Trevor and Marie Weir purchased Ruby Anne from the Barkers. A major overhaul then ensued, including installation of a new timber upper deck and bunks in the cabin, as well as a new colour scheme and new sails.

Since then, Ruby Anne has become a much-loved pleasure craft for three generations of the Weir family, whilst competing regularly in the Division 2 fleet at SSCBC. Trevor and his crew: Michael Kerr, Ian Macdonald, Craig Mochrie, Michael Wilkins, Peter Wynne and other casuals, continue the challenge of sailing Ruby Ann. A few successes have resulted, including Line Honours in the Lady Skippers’ Race in 2015 and 3rd Handicap in Division 2 in the 2021 New Year Regatta series. In addition, there have been some other podium placings in several races over the years.

Ruby Anne is moored the jetty at SSCBC.

Your boat looks very nice in the picture, but I am just afraid that you will want more money for it than I am prepared to lay out. My idea was to get the boat and bring it to the Glenelg River (this place is 20 odd miles from Mount Gambier); a boat that I could place a couple of bunks in so that my wife and I could go down occasionally and spend a few days fishing. I would not need any sailing gear. Perhaps you could dispose of this separately, also the engine. I would not need such a powerful engine on the river. I think I could pick up a second hand 6- cylinder rugby engine that would do the job.

Letter from H. Chaston to Mr Mulhall dated 3/12/1941
In this letter H Chaston makes reference is made to the beauty of the Glenelg River.

We have a wonderful stream here. There are about 90 miles of navigable river, starting from the mouth at Nelson and working up as far as Dartmoor. Fishing on the river at times is very good; bream, perch and mulloway are the main fish we catch.

Before I left I paid your son…the sum of £50 as a deposit on the boat. I will pay the balance £125 when I come over to take possession and arrange for transport.

I am having a 4-cylinder overland engine fitted, with a marine reverse…by BOAT SUPPLIES in Russell Street. While the boat will be on the slip I am getting this firm to clean off and paint the hull outside. I have decided not to take the centre-board out.

Letter from H. Chaston to Mr Mulhall 15/12/1941
Under the new Government restrictions no goods are allowed to be transported that are unessential. It seems to be now that the boat will have to stay where it is.

If you could be at Williamstown at any time you could just see that the boat is OK. I was wondering about the canvas over the cockpit. I think I should have a new piece made, don’t you? Also, if the boat is to be tied up for an indefinite period, would it be advisable to take off the steering wheel, winch, anchors, and put them inside the cabin to safeguard them from vandalism.

All road transports have been cancelled and the railways will not carry any unessential goods. I gave Boat Supplies instructions not to go on with the installation of the engine, and asked them to forward me the key. They replied stating that they thought it would be a good idea if I handed the boat over to the Coastal Patrol Commission, which is controlled by the Navy, for the duration of the war. These boats are used for patrol duty. They state that the boat is maintained and cared for free during the war, after which it will be handed back. They also stated that if I supply the boat, the firm will supply the crew of qualified men.

This does not appeal to me…and told them definitely they just not go ahead with the engine installation… you could put on a new canvas cover over the cockpit.

I would be glad if you could give the caretaker of the Yacht club a ring and ask him to keep an eye on the boat.

Also whether you thought it possible for a couple of chaps to sail the boat from Melbourne to Port McDonnell (this port is 16 miles from the Mount). I would then have no difficulty in getting it to the Glenelg River, which is about 10 miles. This river runs into the sea.

Letter from H. Chaston to Mr Mulhall 4/5/1942
Chaston complained about the unscrupulous firm in Russell Street and that the Nation’s Security Regulations were coming into force in February 1942.

The government prohibited the transportation of all unessential goods, so they wrote and said they could not complete the installation of the engine in time to send by 1st February.

Knowing I could not get the boat over after the 1st February and being most anxious to get the boat out of their hands, I wired to them to send it along for certain, and to include mast, sails, cushions etc. They then wired me demanding £27.10 for making the cradle, the cost of delivery to the railway and securing boat on truck. I only had two hours left to reply so that they could get the boat consigned in time to catch the last train. I sent them the money as I knew that they would not send it without, and the boat would have to be shifted from its moorings somewhere for safe keeping. And it may be years before the Government lifted its restrictions, to enable me to get it over here. Well, the boat arrived by Goods rail on 2 February. I then found they had kept back the mast, sails, mattress, propeller…I was most annoyed, so I wrote to the Criminal Investigation Branch and took the matter up. And three of them interviewed the Firm, and I received an offer from the CIB in which they stated that they had inspected the items not sent and that they were sold, and all the bins would be handed over. I have had all the bins collected except the marine gear box (they advised me they cannot procure one).

When the boat arrived it had a cradle and was supported on the truck by bags of straw, which was railway property. The two propellers they sent me – one was a new one and one was a very old one. I am wondering whether they sent this one in place of the one they collected from the clubhouse.