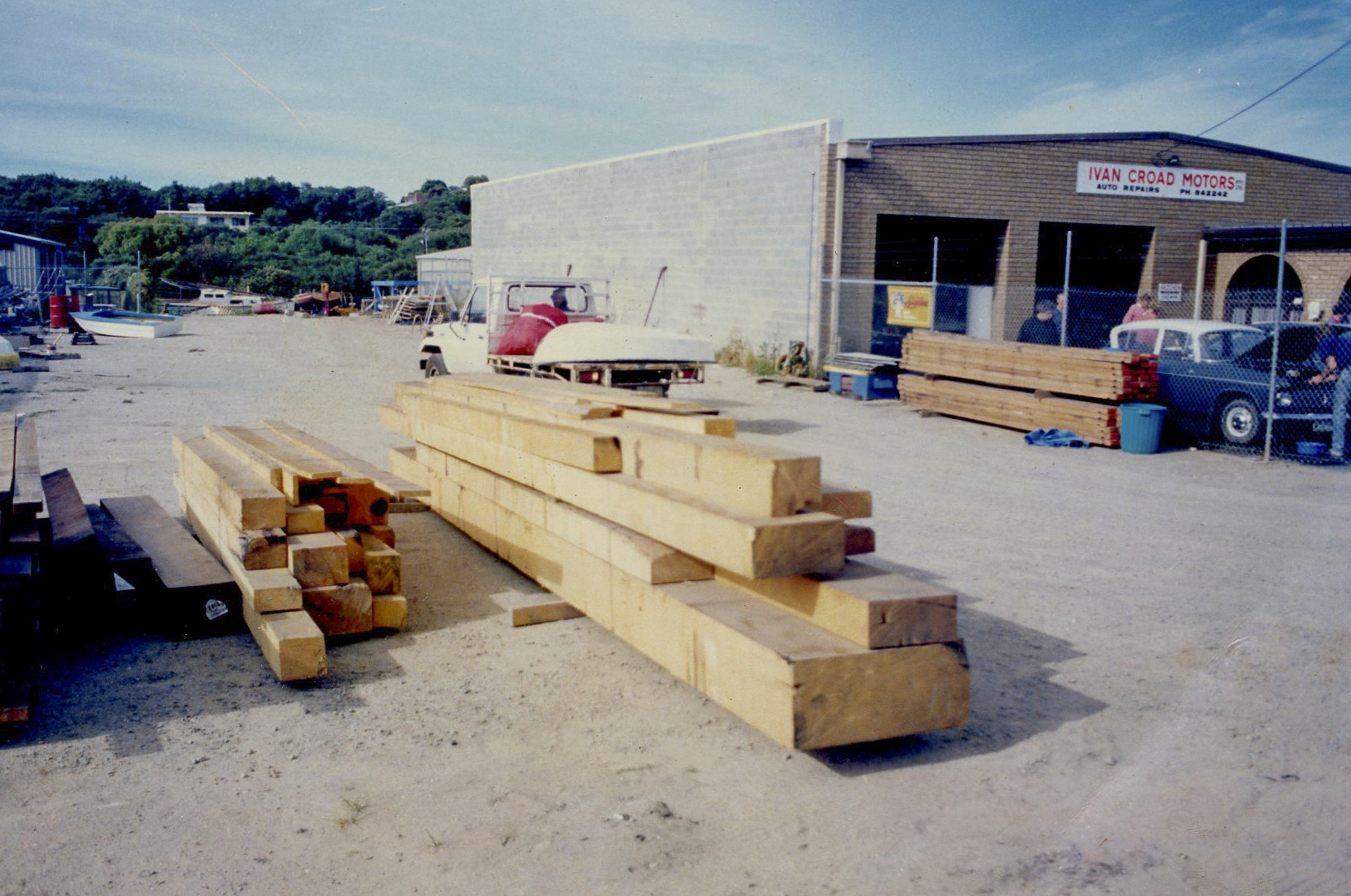 Custodian: Val Ferrier; 1924 – c1960s
Royal is a classic Queenscliff Couta Boat built by Mitch Lacco, probably the best-known Couta Boat builder, and was given to Val Ferrier as a 21st birthday present by his father on Valentine’s Day 14th February 1924. Built at a cost of £113 pounds, the boat was also known for a few years as the Valroyal, reflecting her young owner’s Christian name.

Her dimensions are 26 foot in length with a 10 foot beam and a draft of 3 foot 6 inches; she is planked with New Zealand Kauri with Red gum being used in the keel, stem and stern post. She was gaff rigged with a mast 25 foot in height.

Like most of the Queenscliff fishermen, the Ferrier brothers would sail across Port Phillip to Rosebud late every afternoon to catch some big snapper, before returning to Queenscliff for about four hours sleep. They would then sail outside The Heads to catch barracouta using hand lines and nets.

Val Ferrier remembered how he was paid between two and three shillings for each 100-pound scoop of fish, which was a handsome sum in those days. In a letter to Tim Ryan, his brother Frank proudly related how on one night Val and fellow fisherman John Muir caught a record of 25 fish boxes of snapper in the Royal near the South Channel Pile Light off Rosebud.

Val’s parents once lived on the South Channel Pile Light located in the southern waters of Port Phillip, and his father used to pass the time painting pictures of passing ships on the lining boards inside the Pile Light. These paintings were on display in the Polly Woodside Maritime Museum in South Melbourne for many years.

Val Ferrier and his brother Bill fished in Royal for more than 40 years before the boat was sold and is believed to have also spent some time in Port Fairy, Victoria.

Custodian: Tim Phillips; 1981 – 1982
Royal was later converted into a houseboat and was discovered in the Mordialloc Creek in an abandoned condition in early 1981. She was then restored to her original rig, by Tim Phillips and Clive Beckingsale, in the garage at the Phillips’ family home at Delgany Avenue, Portsea.

Custodian: Tim Ryan; 1982 – Present
Royal was acquired in 1982 by one of the founding members of the Couta Boat Club, Tim Ryan. Further restoration work and the installation of a new Yanmar 2QM15 diesel engine was completed by C Blunt Boatbuilder at Williamstown. Prominent shipwrights including Bobbie Blunt, his son Greg Blunt and experienced shipwright Scotty Warner, inserted new ribs in the tuck and further strengthened the hull.

In February 1984, Val Ferrier at age 81 stepped aboard the Royal at Queenscliff before the annual regatta and bent over and kissed the deck. It was the first time the fishing veteran had seen Royal in many years. Val’s son Norm also skippered Royal that day, maintaining the family connection with her.

In 1995, Royal was again slipped at the C Blunt Boatbuilder yard at Williamstown and an extensive restoration commenced once more with the boat being re-nailed and substantially re-ribbed. Under the supervision of Bobbie Blunt’s son Greg Blunt who had taken over the yard upon the death of his father in 1991, the iconic shipwright Harry Clark and his son Ronnie carried out the works and greatly strengthened the 70 + year old hull to give the old boat a further long lease of life.

In the 1980s and 1990s, Royal was an occasional participant in the Couta Boat Club events including the Portsea Cup, the Petersville Regatta, and was an inaugural competitor in the annual Williamstown Cup held during the March Labour Day weekend. While the event has now been discontinued, the Williamstown Cup donated by Tim Ryan and the Gellibrand Shield trophy donated by Greg Blunt are still on display at the Sorrento Sailing Couta Boat Club (SSCBC). The wooden Gellibrand Shield itself is fixed on the wall of the Club lounge and its intricate rope lining was crafted by master rigger Jack Caines, a well-known Williamstown identity who also refined the rigging on Royal.

Royal has mainly been used as a pleasure boat. Tim Ryan, being a long time amateur naval historian, uses the boat as a platform to photograph shipping movements in Port Phillip, ranging from ocean liners to navy frigates and working vessels such as the old Ports and Harbours buoy tender, the SS Rip. Tim was often accompanied by fellow enthusiast Andrew Mackinnon, son of iconic Sorrento fisherman Ted Mackinnon, owner of the legendary Ken Lacco Couta Boat Mermerus. Thousands of Andrew’s photographs are held on display in the Nepean Historical Society Museum in Sorrento.

Tim tells that it was a privilege to have Harry Clark showing many of his boats moored in Williamstown including the Dolly C after its 1992 rebuild. Harry regularly sailed with him in the 1980s on his Couta Boat Royal C24 in some of the early regattas, and up and down the bay on many occasions reliving his memories of his early days crewing on Lillian, a Couta Boat owned by Queenscliff fisherman Joey Wells. His son Ronnie summed up his father perfectly as:

The old man of the sea, the tiller held in his fingers, feeling every movement in the rudder, not gripped in his fist like a lifeless lump of wood, but a living thing, squinting into the sun, checking the flow over the sails, watching for any wind shifts.

Royal is registered in the ‘Australian Register of Historic Vessels’ on the Australian National Maritime Museum website.