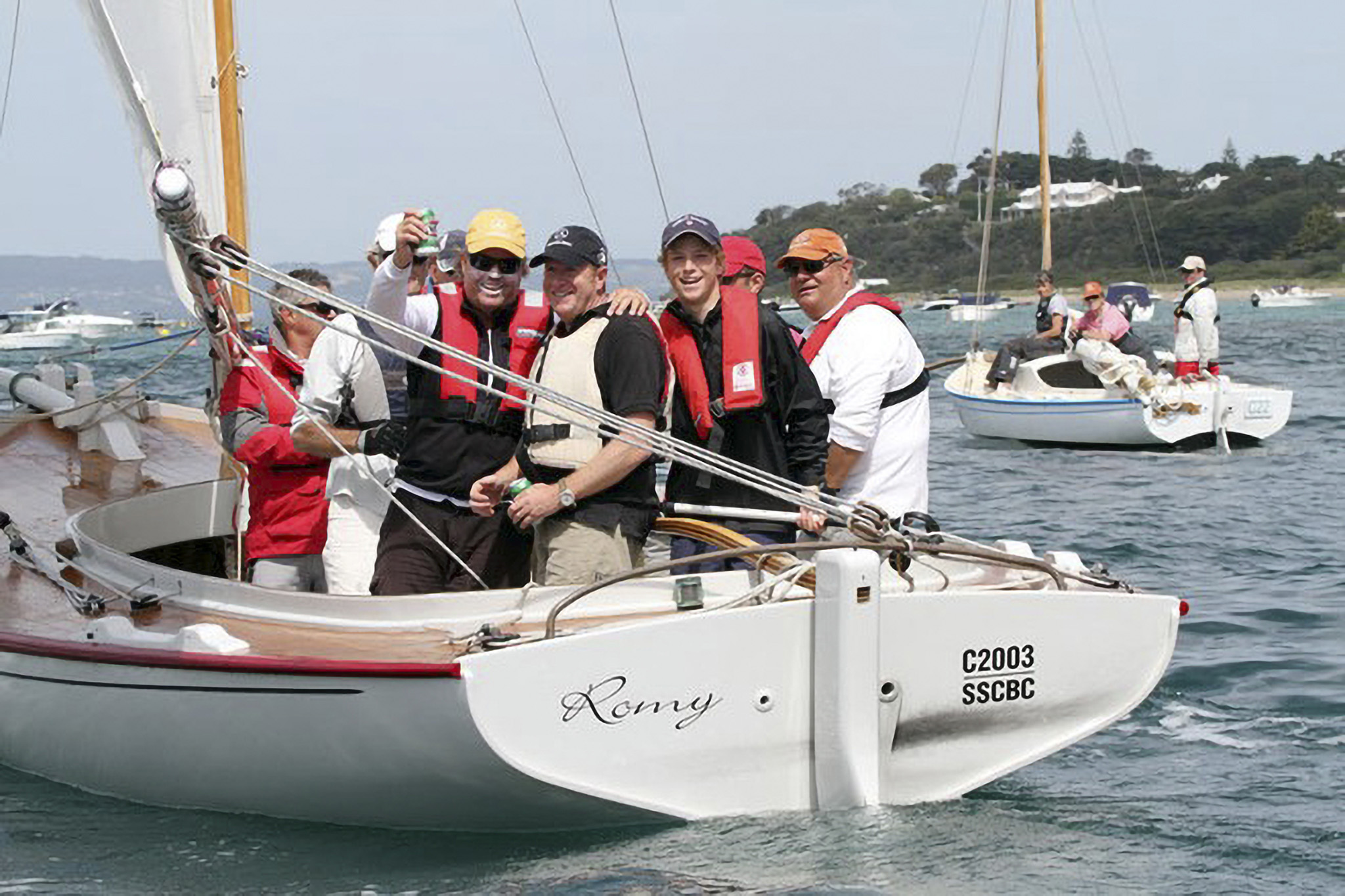 Ultimately, in collaboration with Mark Abbott and the Wooden Boat Shop (WBS), Sorrento Peter came up with a design for Vivienne C2003, her original name, that incorporated all the good aspects of past Couta Boats. She was named after Peter’s wife, Vivienne Gale.

Peter’s discerning eye delivered fair and pretty lines. She is traditionally built with the added integrity of a premium Huon Pine hull and deck. The aim was to produce a boat with better manoeuvrability, acceleration and balance. After looking at line drawings of current boats, Mark Abbott at the WBS drew a number of preliminary sketches to various ideas proposed by Peter. Eventually, they went for a shallow bow with a fine entry straight to a narrow waterline width. Peter wanted a straight exit which meant a wide transom.

Tim Helliwell built the boat at the WBS, and Mark Rimington and Peter set about creating sails to complete the package, with a view to replicating the sections of successful Star sails. The smaller turning circle and faster acceleration were immediately apparent.

Peter says it took him about a season to come to terms with the idiosyncrasies of the Couta Boat design. This is probably a very modest evaluation on his part! Ultimately, the boat was an incredible success, winning Line Honours in every race in Division 1 at Sorrento Sailing Couta Boat Club (SSCBC) over two seasons.

In 2007, when Peter opted to be a Race Officer at SSCBC, it was time to sell Vivienne. At about the same time, champion sailor Nigel Abbott had helmed Vivienne at an event in Flinders on Western Port and discovered she was a delight to sail. Nigel describes that thrill of sailing Vivienne in that race;

As the boat heeled, the narrow beam immersed fuller topsides which added stiffness and gently lifted her bow to windward. Mast and spars of Spruce were uncommon but superior; rigging and running tackle laid out by an experienced yachtsman – running freely, encouraging the crew to trim and respond to the conditions.

Nigel decided that he just had to have her!

Custodian: Nigel Abbott; 2008 – 2017
In January 2008, Nigel became Vivienne’s custodian who, in turn, sold Whisper to Milton Green; both deals were finalised in the same hour on the SSCBC jetty. Permission was sought to change thre boat’s name from Vivienne, named after Peter’s wife, to Romy, the name of Nigel’s daughter. Nigel suggesting;

You can’t sail someone else’s wife!

With Nigel as her custodian, Romy became the most successful Couta Boat to claim successive Line Honours victory in the Division 1 fleet out of SSCBC.

Custodian: David Hendy; 2017 – Present
In 2017, David Hendy and Andrew Skinner heard that Nigel Abbott might be interested in selling Romy. Jane and Nigel had of recent years, enjoyed outings on David’s Palm Beach motor launch. After meeting with Jane and Nigel, David decided to buy Romy to campaign her on a regular basis. David was also hopeful that at some point Nigel would re-engage and perhaps come and sail, once again, with him on Romy.

Romy continues her reputation as the most successful Line Honours racing Couta Boat out of SSCBC. In season 2020, Romy proved her competitive nature winning, on Line Honours, all major championships against the latest designs.

Romy has a regular crew including, at times, helmsman Nigel. The crew’s motto is to

Sail hard, then to play hard.

David maintains the boat meticulously. Romy is certainly one of the most appealing Huon Pine Couta Boats moored at SSCBC.