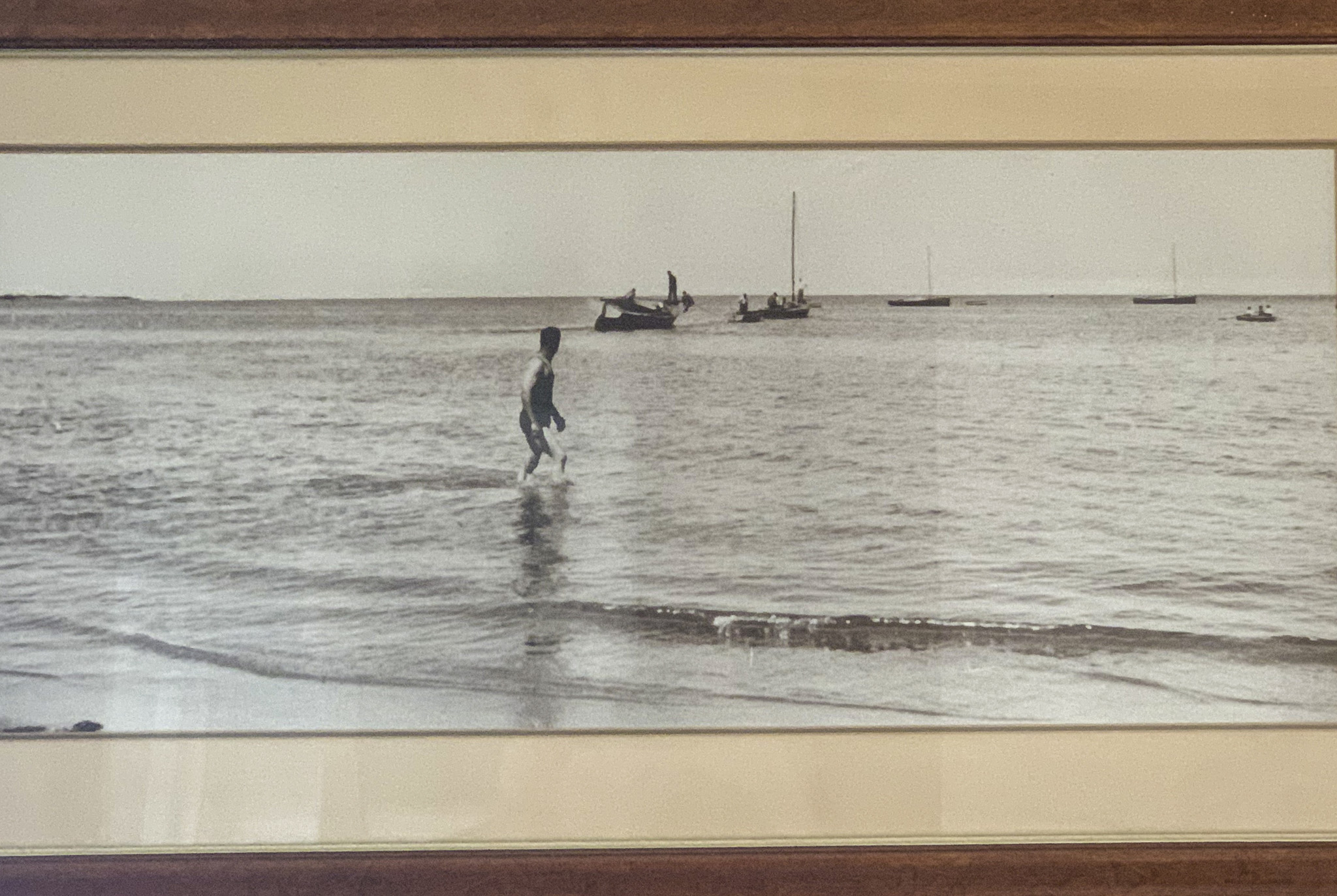 There is still ambiguity around the year of Rita’s build. In February 1991, the current custodian Peter Clarke received a letter from Queenscliff fisherman Frank Ferrier who informed him that a boat was built in 1926 to the same moulds as Rita and was launched as the Mayflower, later to be known as Gracie. Although Frank Ferrier writes that both boats were of the same mould, it is not clear that Rita was built in that same year. Jack Beazley of Queenscliff has a written record of Rita’s launch being in 1930. She was launched with a twin cylinder 6 – 8 hp Karl Erik engine.

Custodian: Arthur De Longvalle; Late 1930s – 1960s
Just prior to World War II, Chidgey sold the boat to Arthur De Longvalle who worked her along the coastline and into South Australian waters, fishing off Port McDonald, Robe and Kingston.

Custodian: Eddie Lolic; 1960s – 1979
In the 1960s, Kingston professional fisherman Eddie Lolic purchased Rita. Eddie discovered she was ‘built up’ by several planks and had a wheelhouse aft. He maintained she was a great sea boat, fishing long distances offshore for crayfish. It is believed she carried the first early marine radio, enabling him to advise the coastal fishing co-op the state and progress of the fleet at sea. He told of one scary incident:

We were out fishing a long way offshore in Bass Strait, beating home against a strong nor’wester. It took us an awful long time to reach port – at one stage we thought we’d never make it back.

On a trip to Adelaide in 1979 to find the Wattle, Will Baillieu, Tim Phillips and Denis Wilkins discovered a derelict Rita in the back garden of Eddie Lolic’s house at Kingston. There was a chook-pen aft and a children’s cubby house up in her bow!

Custodian: Denis Wilkins; 1979 – 1985
Denis Wilkins acquired Rita and returned her to Melbourne for a complete restoration.

Rita was restored by boat builder Charlie Strong during the summer of 1980, in a shed in Port Melbourne. She was re-decked in Celery Top Pine and the Kelvin petrol engine was replaced by a modern Nanni Farrymann R30M 23 hp diesel.

In the 1980s, the newly formed Couta Boat Club (CBC) conducted regattas out of various yacht clubs at both the southern and northern ends of Port Phillip. Rita won or was placed in races at both ends of the bay. Including: 1981 first over the line and handicap winner at Port Melbourne, winner of the Winter Series at Royal Brighton Yacht Club (RBYC), placings during the Hobson’s Bay Yacht Club series, second in the Sleigh Series Aggregate 1983, placings in the Petersville series off Blairgowrie, and various placings in early Couta Boat Club racing off Portsea and Sorrento.

Denis Wilkins had a Hood Sails full-length boom tent made to enable long distance cruising, with many weekends spent camping on board. In the time when his children were at boarding school, a frequent camping location was in Limeburners Bay near Geelong from where the family explored the coast between Geelong and Portarlington. Additionally, Rita took the family squid fishing around the rocky cliffs between Safety Beach and Mornington on the eastern shores of Port Phillip.

Apart from December to February when she was kept on her mooring at Portsea, Rita spent the rest of the year moored on The Wall, next to Denis’ fish restaurant ‘La Marina’ at the St Kilda Marina. It was not unusual for the boat to leave the Marina after dark, to sail or motor down the West Channel, picking up the mooring at Portsea around 2 am.

With his children Simon, Rebecca and Sophy on board, the regular Rita crew included Couta Boat Club members Peter Gibson, Tony Hoppe, Dennis Horne and Alison and James Mighell. During 1983, when Denis was in America for four months with the America’s Cup teams, Dennis Horne and James Mighell took over the management of Rita, with Denis remarking that her reputation as a party boat was secured! Denis couldn’t fault her.

Rita was a beautifully balanced boat and an ideal size. I couldn’t fault her. In any wind you could handle her on your own; just set her up and she’d sail herself.

I remember one New Year’s Day at Portsea, I took Rita out alone. There were white caps galore, with the wind blowing a steady 25 to 28 knots and peaking higher. Off the mooring and into the South Channel of Port Phillip with two reefs in the main and No 3 jib, the boat was fairly tramping. I left the tiller and she sailed herself; water fizzing down the side decks. She was perfectly balanced; I’ll never forget it.

In the Channel about abeam of Blairgowrie, as the wind backed further south, Rita followed, without any steering assistance from me. We went right up past the South Channel Pile, to be almost off Dromana. Later, the wind dropped away and the clouds lifted to a glorious sunset and that evening light. Reefs out and the big jib up; sprung sheets, a coldie, the Fort in silhouette – home in the dark. Magic!

Due to his commitment to professional sailing in the 1983 America’s Cup, the time came for Denis to part with Rita. With a heavy heart, he sold her to Winton Veall on the 8th October 1985.

What a beautiful boat – I should never have sold her!

Custodian: Peter Clarke; 1986 – Present
On 12th February 1986, Peter Clarke purchased Rita from Winton Veall for the same price for which Denis had sold her.

Peter sailed Rita in numerous Couta Boat Club races mainly before the time when the Couta Boat Club merged with the Sorrento Sailing Club, but since then he has used her principally for family boating.

In the late 1980s, Peter tracked down Billy Chidgey’s brother, R A Chidgey, and his wife, and met with them. Mr Chidgey also was a professional Couta Boat fisherman. The name of his boat was Comet. They said that for several years, the boat was unnamed and they weren’t sure why he named her Rita.

They said that Billy was fastidious about keeping Rita looking good and said that, unlike most of the other couta fishermen, Billy didn’t take Rita into the pier to offload his catch. Rather, he loaded the scoops of ‘couta into his dinghy and rowed it in to the pier. After every fishing trip, Billy meticulously cleaned Rita and usually got to the pub long after the other fisherman had arrived. He was a teetotaller so drank only milk at the pub.

Mr and Mrs Chidgey provided Peter with two photos of Rita being launched in 1930 before a well-dressed crowd. Billy is the person in the neck to knee bathers.

Rita is moored at Fisherman’s beach, Portsea, Victoria from where she is used for recreational sailing. But one small contention underlies the connection between Rita’s current and former custodian. When he was involved in the America’s Cup in 1983, Denis had a great battle flag made by the famous flag shop in Newport, Rhode Island.

It was a slightly altered version of matchbox Redhead Rita. Absolutely gorgeous! Large enough to cover my queen size bed! Clarke pleaded with me to have it for the boat and I consented.

Peter still has the flag, and declares: