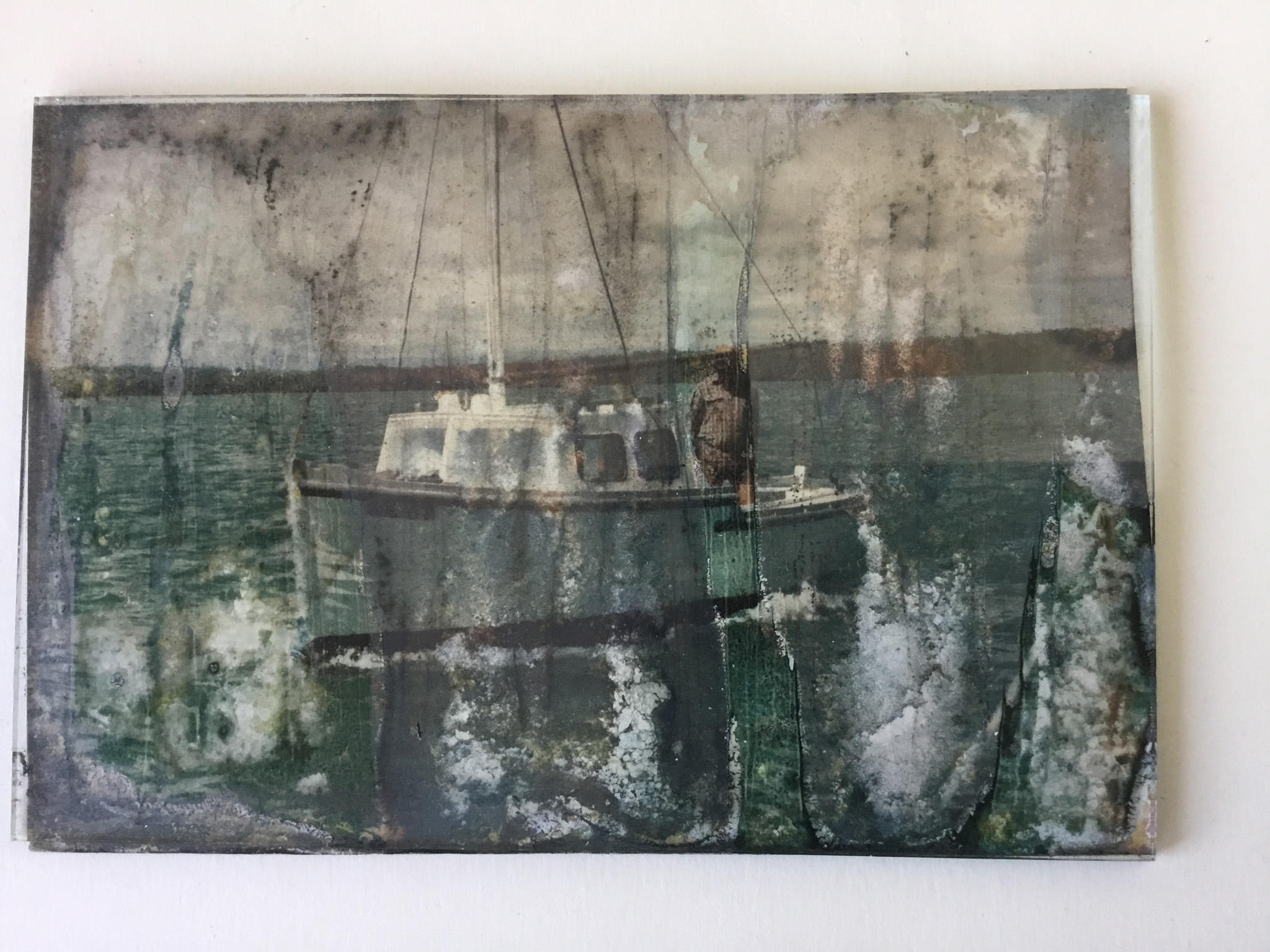 Custodian: Ben Howe; 1947 – Unknown
Rebecca was built in 1947 by small boat builder and repairer Horace Frimley of Port Sorell on Muddy Creek, Tasmania and at one time was also known by the aboriginal name of, Panatana Rivulet. She was built in his backyard adjacent to the river, for Ben Howe who at the time owned the Mole Creek General Store, but who took his family to Port Sorell at weekends where he used Rebecca for fishing and recreation.

At 22 foot 6 inches in length she carried a mast, but she was used by her owner to fish under motor. She was anchored in the shallows of sand flats at the entrance to Muddy Creek, where the family’s use of the boat was determined by the tidal flow which has an elevation of up to seven metres. Often, they would have to wait for a flood tide to anchor the boat.

Richard Howe clearly recalls his childhood days spent fishing with his father in Rebecca. In particular, he remembers the barracoota runs outside The Heads at Port Sorell when he and his young sister would stand on the aft end of the cockpit of Rebecca, each side of their father at the tiller and work the ‘couta jigs, hauling in up to 60 ‘couta in an hour; the catch was manageable as Rebecca was fitted with a wet-well. On their return to shore they would distribute the fish to neighbours and other locals in the vicinity, keeping just a few for family consumption. In addition, they also caught blackback which is a juvenile Australian salmon.

All maintenance was carried out by her custodian on the slip in Muddy Creek.

Custodian: Johnny Griffiths; 1976 – Mid 1980s
It appears that for some years she lay idle at Muddy Creek, but she was retrieved in about 1976 by a local Port Sorell fisherman Johnny Griffiths. By this stage she was in a dilapidated state, with a couple of sprung planks. Johnny is the son of the legendary Muddy Creek boat builder Murray Griffiths, who was a brother in law to Horace, the original builder. Murray owned and operated the slipway adjacent to the current walkway bridge.

Custodian: Bevan Cummins then Malcolm Deveraux; Mid 1980s – Late 1980s
Around the mid 1980s, Rebecca was sold to a coastal man, Bevan Cummins, who then sold her a few years later to Malcolm Deveraux to be used for cockle fishing on the east coast of Tasmania at Coles Bay. It was there that she met misfortune when she broke her mooring and foundered on rocks.

Custodian: Les Sims; Late 1980s – Unknown
She was recovered and then transported back to the Devonport vicinity where local commercial fisherman Les Sims sighted her in the late 1980s, sitting in a paddock on Winspears Road, East Devonport. As a commercial fisherman, Les fished for cray, shark, barracouta and scale fish; his vessels were commercially licensed all around Tasmania. From an early age, Les began tinkering with boats.

From when I was young, I started building boats with my father. I would see a dinghy somewhere and I would buy it, take it home and do it up.

Recognising Rebecca’s potential, Les purchased her and set about to rebuild her. He replaced some of her King Billy Pine planks and inserting a 10/12 10 hp twin cylinder Simplex engine.

She then returned to the familiar waters of Muddy Creek, but was seldom used by Les. So he sold her.

Custodian: Don Cunningham
The new custodian Don Cunningham determined that a more spacious cabin with head room would be desirable, so set about raising the cabin to create a more functional and weather proof structure.

Custodian: John Hiscock
Rebecca was then sold to Devonport local John Hiscock who continued to enjoy cruising and fishing in and around Devonport.

Custodian: Robin Coutts; Unknown – 2009
Subsequently, Rebecca was sold. Robin Coutts of Burnie, located some 50 kilometres north-west of Devonport, became the new custodian and berthed her at Wynyard Wharf. He used her for fishing and pleasure cruising along the north-west coast of Tasmania.

Custodians: John Blyth, Ewan Blyth, Tyron Blyth; 2009 – Present
In 2009, John Blyth and his sons, Ewan and Tyron became the next custodians of Rebecca.

They returned her to Devonport from Wynyard under motor, taking 11 hours over a distance of some 54 miles, and berthed her at the Mersey Yacht Club (MYC) located on the Mersey River at East Devonport, Tasmania.

Rebecca was used for a year or so before negotiating with boat repairer Les Sims to rebuild her, with John as his ‘apprentice’.

She was floated onto a heavy duty trailer and transported to Les’ leased workshop on the river at Mersey Main Rd. By agreement, Les took to her with a chainsaw and cut the topside off to reinstate her shear-line, replicating her original state.

Many long hours later, Rebecca emerged with a new Huon Pine transom, restored planking, with some minor replacements, including: King Billy Pine staves reclaimed from the Lake Margaret pipe line of two kilometers in length built in 1911, which fed the Lake Margaret Power Station. Hardwood sister ribs were added as required, and Huon Pine Sampson post and Tasmanian Oak deck frame timbers. In the interest of retaining as much of her original condition, the wet-well was restored and retained.

In 2011, Les relocated his business to Stanley, warehousing on the wharf. Rebecca was trucked to Stanley to conclude the fit out, including laying the deck with caulked Celery Pine and the final construction of the cabin and rigging.

In the traditional boatbuilding manner a florin coin donated by Mrs Sims, mother of Les, and a great boat handler and ‘fisherman’ in her own right, was placed at the foot of the mast prior to ‘stepping’. John and his sons are intent on preserving the original character and function of Rebecca, as was Les Sims in her rebuild.

In keeping with the traditional practices of the Tasmanian ‘couta fishermen, Les provided for Rebecca two original King Billy ‘couta jigs and made two jig-sticks, both of which were commonly used along the north-west coast of Tasmania by the local fishermen. He also recreated two King Billy fishing boxes capable of holding around 40lb of fish. However, it is understood that when the ‘couta were running, time didn’t allow for the boxes to be used; the fish were simply jigged on board until they topped the gunwales.

Rebecca was finally relaunched on the 26th February, 2012 with new sails. Following the launch, she returned to her current berth at the MYC Marina at Wynyard.