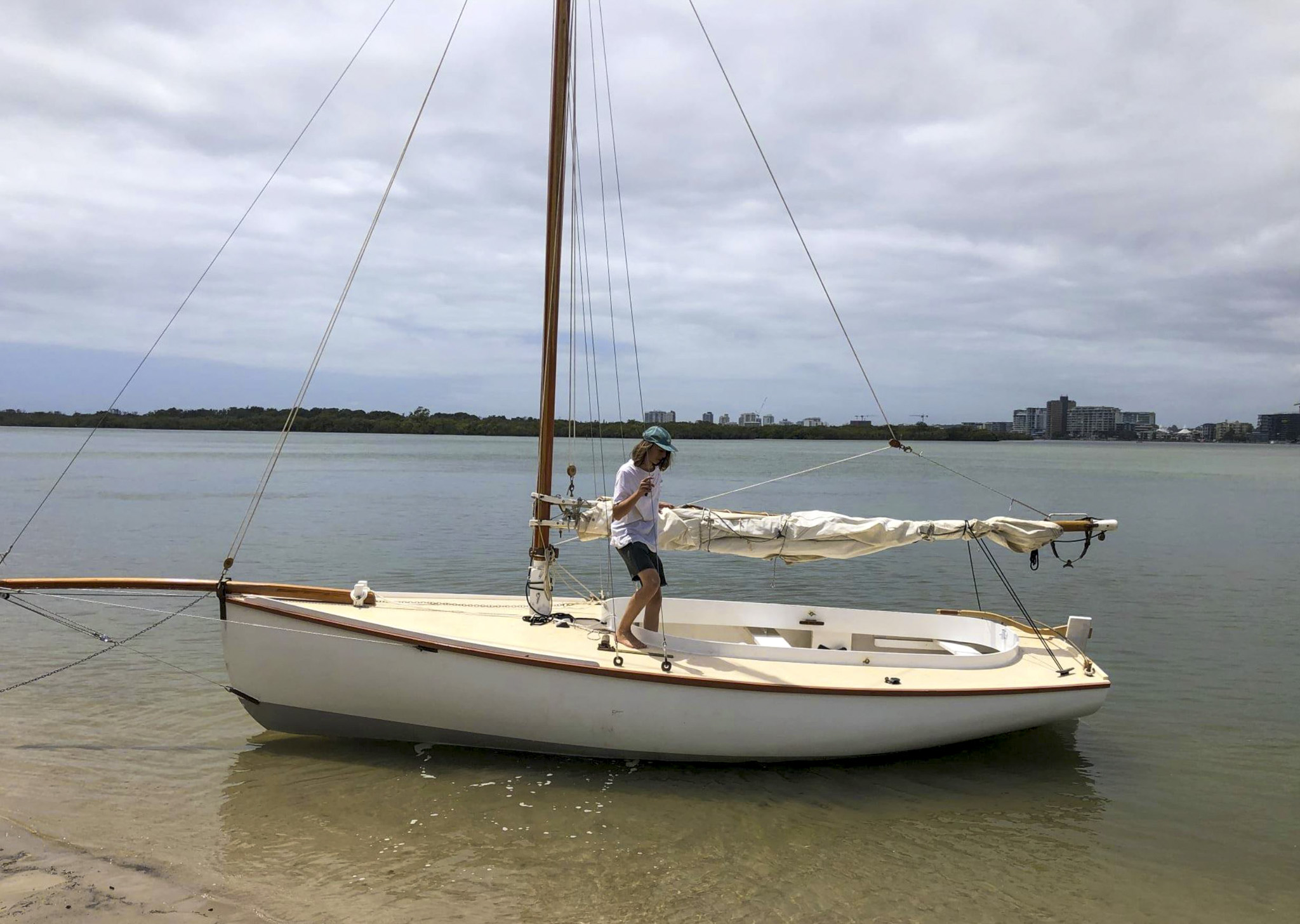 Custodian: Graeme Doyle; 2004 – 2019
Pioneer was built by amateur boatbuilder Graeme Doyle in Adelaide, South Australia over a period of 15 years, commencing in 2004. She is 20 foot in length and is built of Western Red Cedar.

Graeme had often seen and admired a Couta Boat that had been built by Robin Haldane, a member of the well-known Port Fairy fishing family in Victoria. This classic gaff rigged boat held its appeal and became the inspiration for Graeme to build a boat of his own.

A move to Adelaide in 2002 by Graeme and his family triggered the need for a project. In 2003, he purchased plans from the Wooden Boat Shop (WBS) in Sorrento and commenced the building in 2004, after having to construct a shed for the project. But as he was working full-time, the build became his weekend project. Progress, although slow, was made. By 2006, the planking was finished and in 2009 an engine was installed. The momentum began to build when Graeme started getting some fittings cast locally, while other fittings were purchased from the WBS.

The family move to the coastal village of Robe in South Australia in 2019 brought about another re-consideration. Graeme’s initial intentions were to sail the boat in the Port Lincoln area, but the boat ended up at Robe where launching and mooring conditions were different and more costly. Although his dreams of sailing his boat in his retirement were quickly disbanded, he was able to acknowledge his great satisfaction from completing each small step, and the help he got along the way from his good friend Graham Daniels from Port Lincoln Wooden Boats.

In 2019, having not launched his new boat, Graeme found a buyer from Queensland, a young timber boat devotee, Jayce Raaschou, whose love for timber boats started when he was 10 years old.

Custodian: Jayce Raaschou; 2019 – 2021
Boats have been an integral part of Jayce’s life, from the first time when he was four days old aboard his parent’s boat crossing the English Channel. In particular, when he was around 10, timber boats became Jayce’s fixation; he would walk around the marina admiring them and trying to talk to their custodians.

When Jayce was 12, he sold his tinny and decided to save for a timber boat. It took five years to save the money and find the right boat. After looking at many day-sailer types he decided that a Couta Boat, if he could afford one, would be the perfect boat. With the generous assistance of his parents, Jayce’s dream was realised. And after a year of searching the major classified sites, he found his Couta Boat to be, but it was located two thousand kilometres from where he resided.

To make matters worse, as a result of COVID-19 throughout 2020, travel restrictions and lockdowns were occurring throughout Australia. Consequently, without the luxury of conducting a personal inspection, a surveyor was contracted to survey the boat. Jayce was thrilled when he was notified that she passed the survey with ‘flying colours’.

After two weeks of organising, the journey from South Australia for Queensland took two days and the boat arrived unharmed. Work commenced the next day to make some final adjustments: The mast was modified and a tabernacle was added, the centre-board was then lowered via a gantry crane into the case, and the lead ballast was installed. The engine was in great shape, and only required some assorted plumbing and filtration components.

Jayce chose to name his boat Pioneer, after the name of an instrumental piece by the well-known Australian rock band ‘Split Enz’. The instrumental was always played before the song Six months in a leaky boat. In Jayce’s reasoning, his custodianship of Pioneer was similar to that of Split Enz’s instrumental – it was a precursor of things to come.

After numerous tests on dry land, Pioneer was launched for her maiden voyage on 16th December 2020 at Mooloolaba Marina in Queensland. Just after her entry into the water she was christened with champagne, and a few words were said before she was cast off from the jetty.

She handled beautifully and her little Yanmar never skipped a beat. Confidence was high so she was led out of the seaway and into the bay where there were two-metre swells and an unpleasant north-easterly. Her seaworthiness was tested and she pleasantly surprised all on board.

Jayce’s plans for Pioneer included new sails and for him to enjoy being on the water, sailing her. However, his long term goal to seek an apprenticeship in boat building in southern Tasmania triggered an early sale of Pioneer.

Custodian: Leigh Hitchcock; 2021 – Present
In April 2021, Pioneer was on sold to Leigh Hitchcock from Rye at the southern end of Port Phillip, Victoria.

Leigh first sighted the then unnamed boat for sale as an unfinished project, but the time was not right to make the purchase. Some 18 months later, a boat very similar and now named Pioneer, appeared for sale in Queensland. Leigh discovered she was in actual fact the same boat and purchased her immediately, in the midst of a COVID lockdown!

Despite the threat of border closures and two false starts, Leigh eventually made the trip from Rye to Mooloolaba where he was duly impressed with his acquisition.

Jayce took me for a sail and showed me the ropes as they say. I loaded her up on the trailer and headed for Victoria as quickly as possible, with the threat of further border closures in the back of my mind. Touch wood, I made it without any hold ups.

Leigh’s intention is to sail Pioneer in the local fleet out of Sorrento Sailing Couta Boat Club.