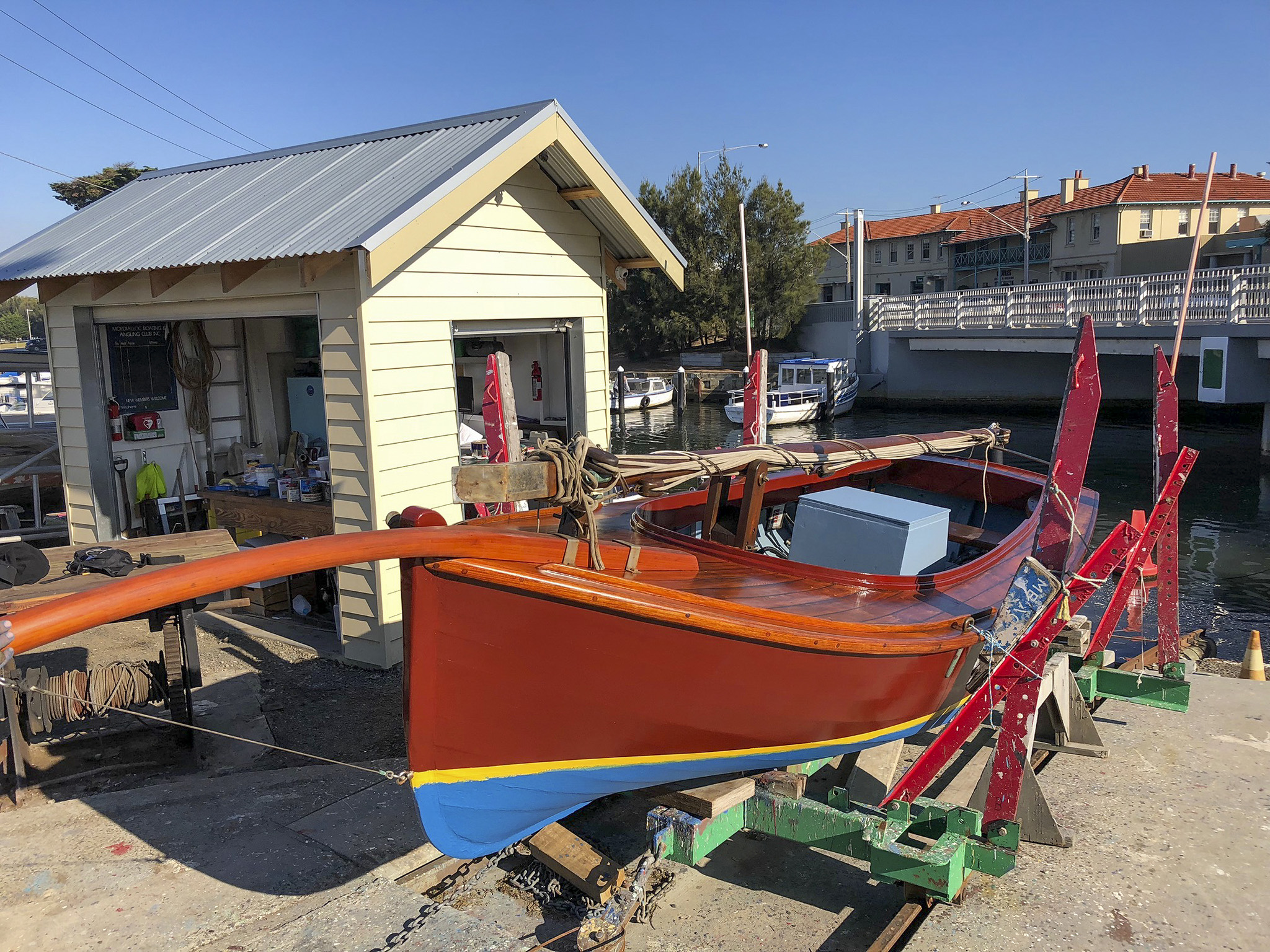 Although she shares similar lines to the Victorian Couta Boat, the boat was built as a classic pot fishing vessel and is known as a Cod Boat, recognised by her wineglass shaped transom and fitted with a small wet well and centre-board. Traditionally gaff-rigged, she is just 17 foot in length and carvel planked. Ned Jack built a fleet of Cod boats in the early 1900s for fishing in the Tamar River.

Custodian: Matt Stuart; 1988 – Present
Peggy’s current owner Matt Stuart first sighted the boat in 1982, on one of his regular trips to Port Sorrell to visit his father. She was on swing mooring towards the mouth of the Rubicon River. At the time Matt remarked on how beautiful her lines were, and asked his dad to keep an eye on her, in the hope she might come up for sale.

Six years later the boat was for sale, so Matt promptly purchased her. He does not remember the name of her owner at the time, but realised that in this six year period she had been neglected. She was moored in a little creek leading into Port Sorrell where, at low tide she was high-and-dry on her side.

Towing the boat on a trailer, Matt returned to Melbourne and placed her in his backyard in the bayside suburb of Hampton. Matt removed the light-weight sharpie rigging on her, which included an aluminium mast and boom. This rigging indicated to Matt that, most probably, she had been used for recreational sailing by her previous owner. Peggy sat in the Stuart’s backyard for the next nine years while Matt and his family moved on with their life, until his wife Jan gave an ultimatum:

If you don’t do something with that bloody boat, I’m going to burn it.

So Matt swiftly took action to restore her. It was during the restoration that she was named Peggy, after Matt’s mother who died in that period.

Joe Pompei from Pompei’s Boatworks in Mordialloc, a Melbourne suburb on Port Phillip, restored her over three years. As she had been built of the unique Tasmanian timber of Huon Pine, her hull was still in near perfect condition. The only repair done on the hull was done long before Matt purchased the boat; part of the planking spanning three ribs had been replaced. However, the Huon Pine deck that had been caulked and puttied and nailed with steel nails, had rusted out. The beams and coamings were replaced and a new deck of Celery Top Pine was fitted, using copper and monel nails.

Peggy is permanently berthed in the Mordialloc Creek in bayside Melbourne and is regularly used by Matt for fishing. Often, in warmer months, he will go fishing before dawn; a favourite place is off The Horse Paddock along the Mordialloc foreshore. On some occasions he will venture further, as far afield as ten nautical miles off shore, for the ‘catch of the day’, which could be flathead, snapper, pinkies, salmon or whiting.

As well as for fishing, Peggy is used by Matt and his family for recreational sailing and cruising along the foreshore of Port Phillip, from Mordialloc to Sandringham. As Peggy is a light boat, it is possible to anchor her in an onshore breeze and step onto a quiet beach. Often, on these trips, Matt encounters the wonder of aquatic mammals such as dolphins and seals frolicking close by the boat. One incredible experience which Matt won’t forget was sailing through a huge school of salmon; the salmon were not in the least perturbed by the intrusion of a moving vessel, they were on their own salmon-run mission.

For about 20 years, Peggy has been featured on commercial postcards that are sold to promote the local Mordialloc environs. In addition, she has been the model for an artisan who crafts model boats; and also the subject of numerous paintings by amateur and commercial artists.

It was only through recent contact with Port Sorrell boat restorer Les Sims that Matt was able to solve the mystery of Peggy’s build: that she was a classic pot fishing vessel known as a Cod Boat, but with similar lines to the Victorian Couta Boat.

At the grand age of more than 110 years, Peggy is a fitting tribute to the skills of her builder Ned Jack and the commitment of her current custodian to restore and preserve her classic features.