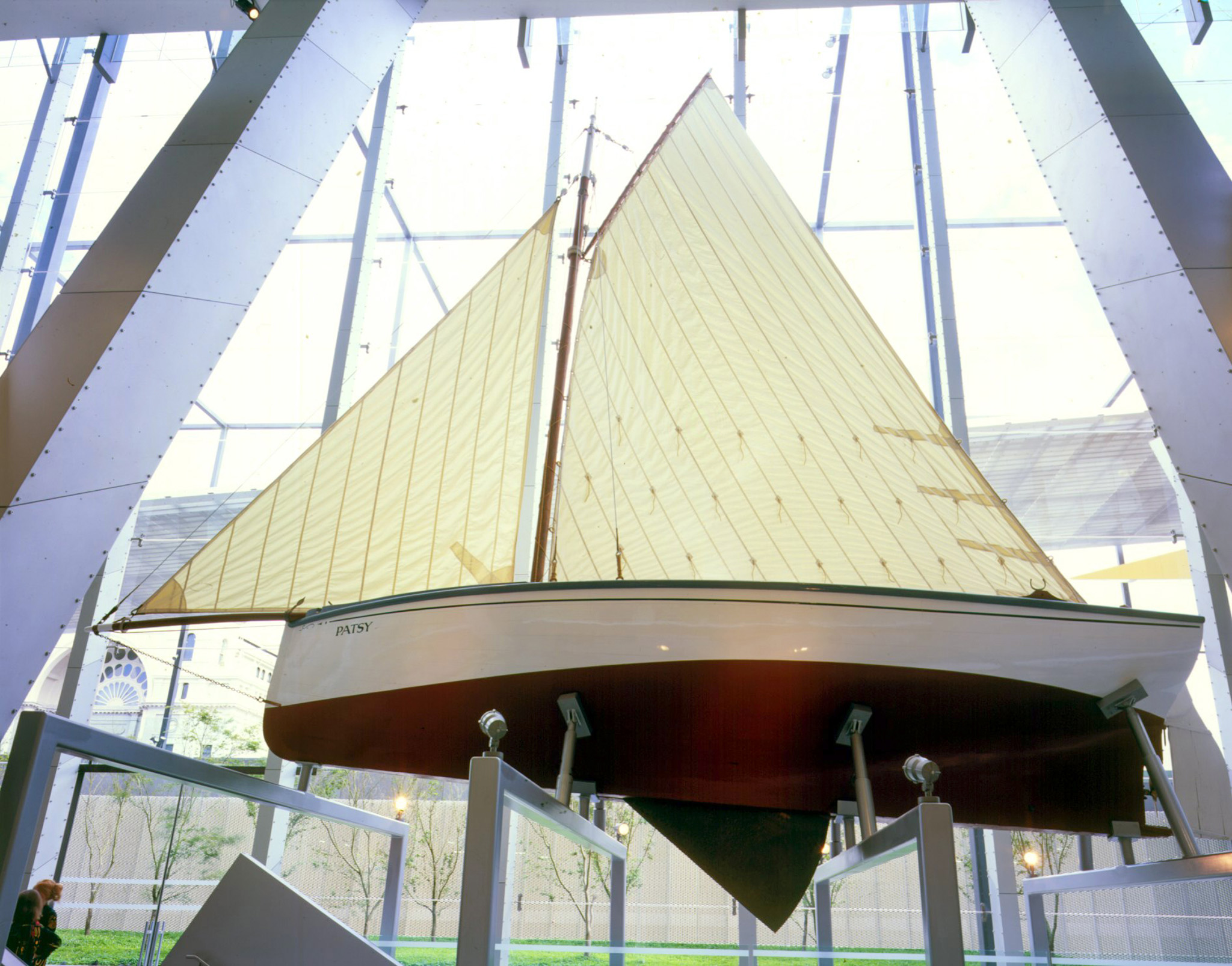 Early Years
Patsy is a traditional Couta Boat that was originally designed for commercial fishing of barracouta in Port Phillip, Victoria and Bass Strait. While the exact year of her build is not known, there are some clues within her construction, such as provision for a propeller shaft, which suggest the date was around 1920.

Patsy was crafted by a well-known Couta Boat builder, JB Jones, the son of boat builder JR Jones. JB Jones operated from boatyards at South Melbourne, Footscray and from 1920 until 1927 on the Maribyrnong River at Ascot Vale, where it is likely that Patsy was built.

Like his father before him, JB Jones’s boats were vertical in the stem, but were much shallower in the forefoot for manoeuverability and had no hollow in the waterline foreward.

Custodian: Kevin Douglas; 1946 – 1947
It is understood Patsy was used in the northern end of Port Phillip until the 1940s, but by whom and from which port remains unclear. Having initially been used professionally, it is likely that by 1946 she was being used for pleasure sailing on Port Phillip, Victoria. Her lug rig had been replaced by the more modern gaff arrangement.

The first recorded owner was Kevin Douglas, a 17 year old fisherman from Devonport in Northern Tasmania who bought the boat in 1946. Kevin’s purpose was completely different. He had been working on an uncle’s Couta Boat for a while, earning a good wage. He soon realised, however, there was more money to be made by owning his own boat, so he came across to Victoria with his father to find a suitable vessel.

The father and son duo first saw the boat tied up in Williamstown and had it put on a slip at Savage’s boat yard in order to inspect the hull. Satisfied with what he saw, Kevin Douglas bought her for £350. Another of his uncles, Jim O’Neill, was a ship’s captain and he agreed to help Kevin sail the boat across Bass Strait.

Before they left on the journey, they had Jack Savage build a small cuddy structure for shelter from the ocean. The pair had just a gas stove and some bully beef, expecting to catch sufficient fish to supplement their rations.

Their first attempt failed because of poor weather, when they were hit by a fierce gale and hove to for some hours off Cape Otway. Exhusted, they returned to Sorrento. The crossing eventually took place in July, 1946 although not before successive gales forced them to shelter first on Naracoopa on King Island and then again in Telegraph Bay at Three Hummock Island. Kevin celebrated his 18th birthday on the choppy waters of Bass Strait.

Before using the vessel for fishing, Kevin Douglas made a few structural changes to the boat. Then in early 1947 he took out his first 12-month licence to operate the vessel as a fishing boat working out of Devonport on the Bass Strait coast of Tasmania. She was registered as Little Lady, with the registration number LFB 1731. According to some sources, he made a good living, paying off the boat within a couple of years. According to others, he soon found the schools of ‘couta depleted and turned to other pursuits.

Custodian: Carl Griffith; 1947 – Late 1940s
In the late 1940s, Kevin handed the boat over to Carl Griffith who intended to buy her from him. Griffith had the boat towed around to Port Sorell, only a few miles to the east, and moored her there. Some slight damage occurred and for the next couple of years Patsy remained tied up at The Pegs.

Custodian: Murray Griffith; c1950 – 1993
In about 1950, Kevin Douglas sold her to Carl’s brother Murray Griffith who was a Port Sorell fisherman. Murray already had a boat called Patsy and so he called his new craft Patsy II. A few more changes were made including the addition of a cabin. The centre-plate case was removed to fit a wet well – traditional Victorian Couta Boats always had dry wells, but Tasmanian fishermen generally ran a wet well.

Whereas many Victorian fishermen continued to ‘arm’ the fish, that is to de-hook by tucking under the arm those in Tasmania had taken to using a well board; the catch would be landed on a board, angled up from the well, throw the hook and slide into the well.

The jibboom was removed and three feet cut off the length of the boom, suggesting sail was very much an auxiliary consideration compared to the practicality of fitting a large number of boats into the jetty for unloading. A number of sister ribs were added to strengthen the original Blackwood timbers that had begun to rot. Murray maintained a fishing licence for the boat until 1991.

Custodian: David Yaxley; 1993 – 1999
After Murray Griffith retired from commercial fishing, the boat was sold to David Yaxley in 1993 for recreational use.

Custodian: Couta Boat Club; 1999 – 2000
In the late 1990s, the State of Victoria was planning the construction of a new and much enlarged space for the state museum, which was to move from its central city home of over a century to modern space in the Royal Exhibition Gardens. The new building would feature a cavernous entry foyer.

Thistle was already registered as a Historic Vessel at the Australian National Maritime Museum in Sydney and on display, but there was no Couta Boat in a major exhibition in its Victorian home. Club member and later Commodore of the SSCBC, Graham Cunningham happened to be on the board of Museums Victoria.

After some discussion it was agreed that if the Couta Boat Club could fund the acquisition, restoration and installation, the Museum thought it entirely appropriate the iconic Victorian fishing boat be suspended in the void at the Museum entry foyer.

Patsy was selected as available and suitable for the display. Through a series of fundraising efforts the Couta Boat Club, keen to preserve the heritage of the Couta Boat and on having it widely accessible to the public raised over $60,000 to undertake the project.

In September 1999, Sorrento boatbuilder Tim Phillips arranged the purchase of Patsy on behalf of the Couta Boat Club. Restoration commenced in January 2000 and was completed for the Museum opening in July of that year. The work was carried out at the Wooden Boat Shop at Sorrento under the supervision of Tim, in close collaboration with Museums Victoria conservation staff, particularly Michael Staples, who had similarly overseen the restoration of Thistle.

Whereas Thistle sits in the water and from time to time takes part in heritage sailing events on Sydney Harbour, Patsy was to be a static display, so slightly different criteria applied to the project.

The objective of this project was to be conservation, rather than restoration for competive sailing. The boat was to be returned to its original construction and form as closely as possible.

Replacement was undertaken only where necessary to ensure sufficient structural integrity for exhibition, but not for sailing. Timbers that showed wear and tear were to remain where possible.

The cabin was removed, the cockpit restored to its original configuration, which could be seen from the old timbers. The centre-plate case was reinstated. Unusually, as could be seen from the keel slot, her case did not extend to under the forward deck beam (which affords a bracing point in most boats), but finished short of the coaming.

The degraded blackwood ribs had long since ceased to perform their task of holding the carvel planks tightly together, and over time the hull had deformed; the deformation had been reinforced by caulking the resultant gaps and fitting sister ribs to the new shape. All the seams were raked of their caulking and the hull completely re-ribbed to her original form.

Remains of the lug rig were found in the sheaves of the mast and the extra lugs brazed on the spider band at the time of conversion. The boom was extended. Col Anderson from Hood Sails in Melbourne made a set of traditional cotton sails.

Custodian: Museums Victoria; 2000 – Present
Patsy was donated to Museum Victoria on behalf of the Couta Boat Club and remains on permanent display in the foyer.