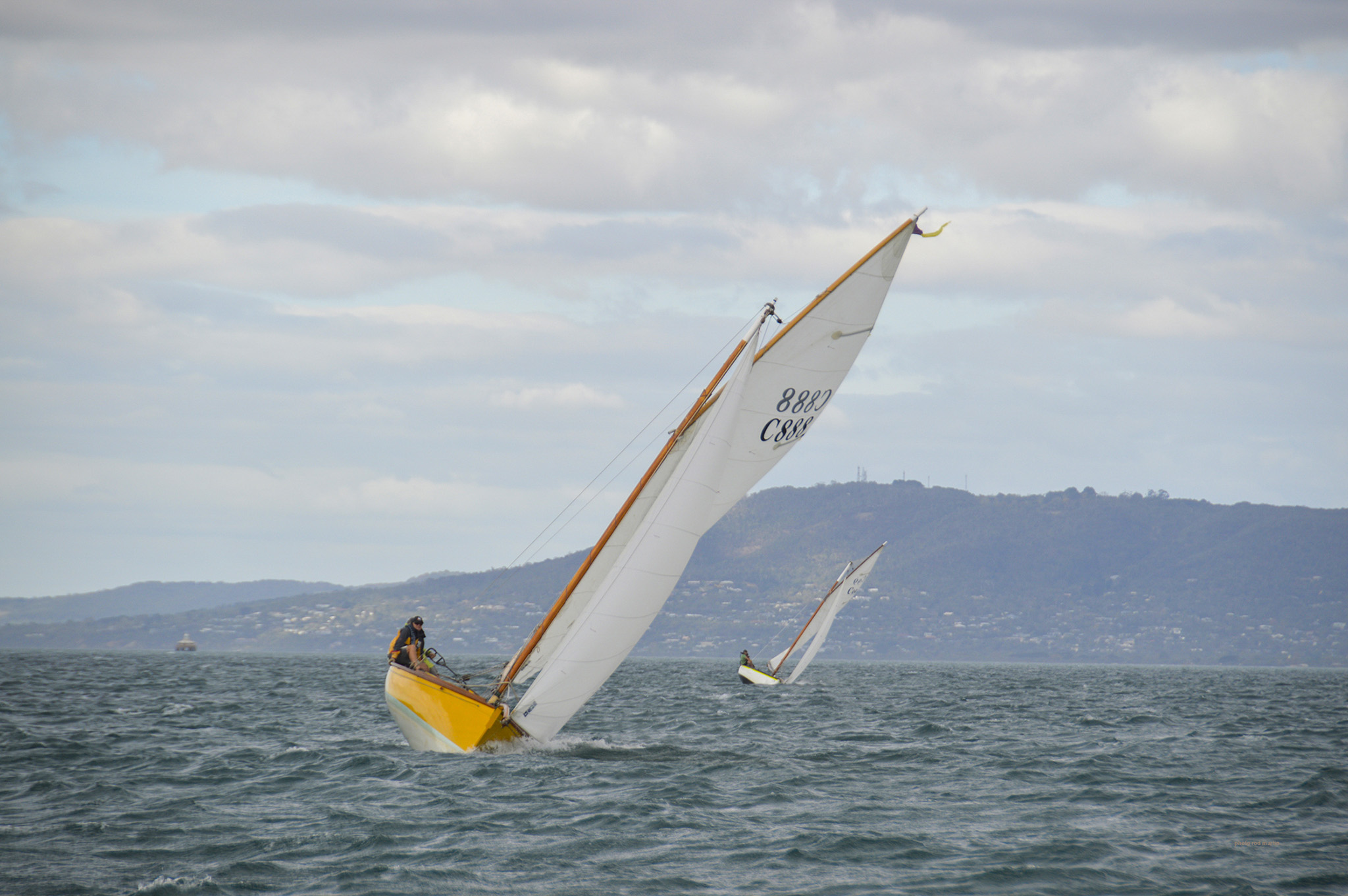 Custodians: Bernie O’Hanlon and Darren Hart: 2003 – 2006
Sorrento sailors Bernie O’Hanlon and Darren Hart purchased the bare hull that was ribbed and planked at the Wooden Boat Shop (WBS) in Sorrento in August 2003. They acted as boat labourers and engaged WBS employee Len Dodson to build out the rest of her. Lenny’s brief was not to skimp on quality workmanship or materials. Len worked by day, and Darren and Bernie worked after work hours for four months to finish her. Mystify was launched on Christmas Eve in 2003.

Custodian: Bernie O’Hanlon; 2006 – Present
Bernie assumed outright custodianship in 2006 as Darren went to the dark side to displacement catamarans, although Darren is still an integral part of the crew.

Mystify’s crew have never been one to conform to the mainstream. In contrast to the crew, the boat adheres to the heritage principles and rules of the class. She is superbly constructed and maintained, planked with the prince of boat building timber Huon Pine, along with a hard-wearing Celery Top Pine deck and beautiful clear Tasmanian Oak coamings and thwart. Mystify is traditionally rigged with no exotic fibres or materials, a full set of traditional wooden cheeked blocks and crosscut sails. Her construction has set her up to be a durable asset for her current and future custodians.

Since her build, Mystify has been universally known as The Yellow Boat, sometimes also referred to as The Pirate Boat, The Tradie Boat, The Banana Boat and other roguish terms.

She is beautifully balanced and, along with a number of other boats in the fleet, is a reference to Couta Boats of the bygone era of mast forward, including the circa 1926, Ripple. This sail plan gives her options to raise or lower her mainsail’s centre of effort, depending upon conditions. Mystify excels in light air.

Mystify has proven to be  very competitive at the top end of the Sorrento Sailing Couta Boat Club fleet. She has won the Portsea Cup, the SSCBC Club Aggregate Championship, numerous Winter Series, and has enthusiastically participated in many regattas around Port Phillip.

Some serious parties were held while staying overnight around Port Phillip. In 2004, a group of around seven Couta Boats set sail for the annual Australia Day weekend regatta held by the Royal Geelong Yacht Club.

Let’s just say records were set, legends made, boisterous activities applauded by all present with a constant belly ache from laughter. This became an annual event for Mystify for a few years, until our bodies tired of the recovery process!

Over the years, political correctness has marched forward… gone are the days when beer companies supplied unlimited beers with attractive ladies handing them out prior to and after racing. Mystify’s crew has adjusted to this new regime, only consuming one or two beers before the race, none during the race, plenty afterwards, with an early curfew pick up by one of the more patient family members.

There is something alluring about Couta Boats, the heritage, the beauty of their lines, the high sail area to displacement ratio giving a lively on water performance, the camaraderie within the crews, the diversity and competitiveness of the fleet’s participants, the exciting racing and especially the lovely solo or shorthanded day sails – all conspire to the fascinating appeal of the Couta Boat.

In short as the song goes:

You can check out but you can never leave.