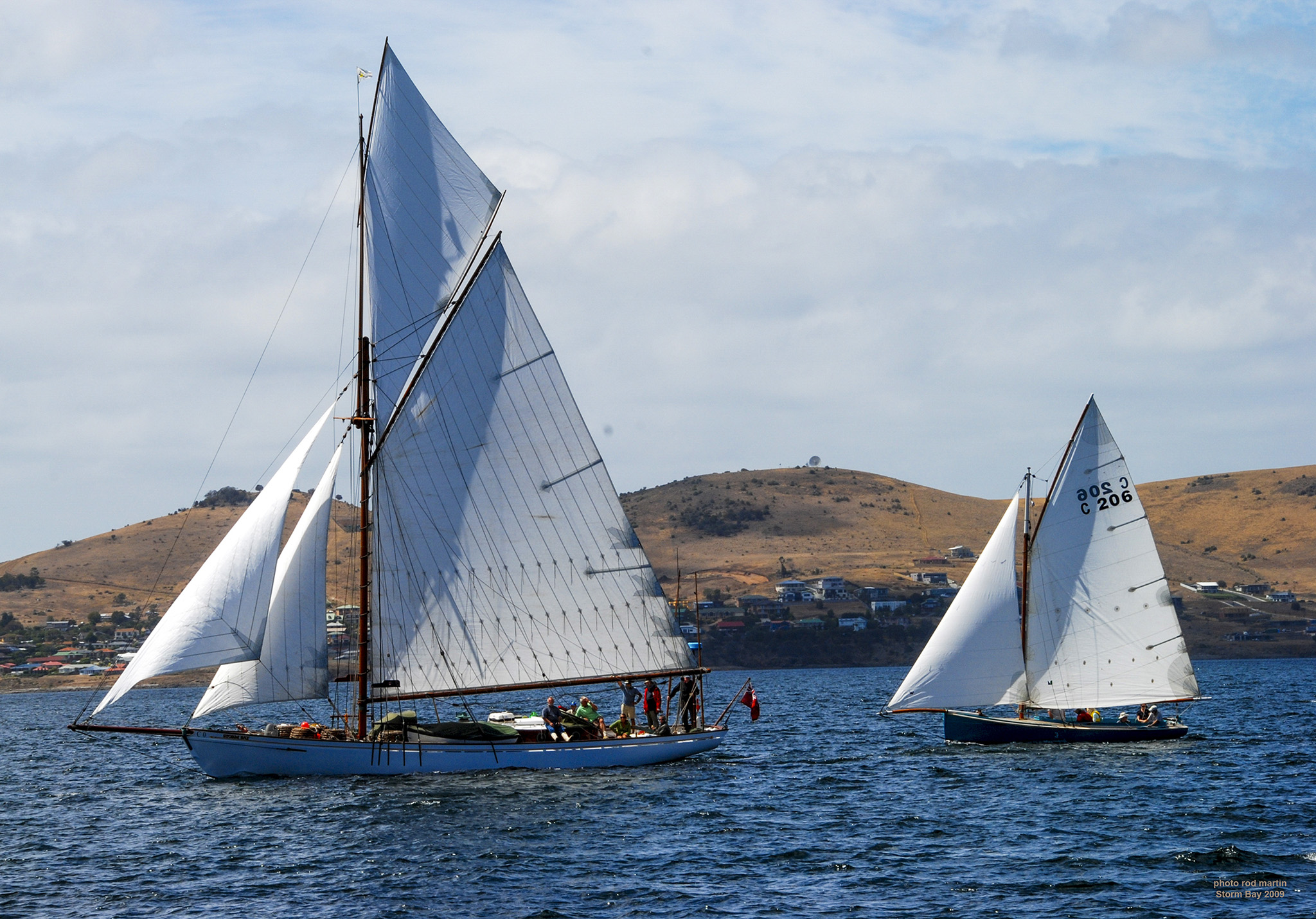 Designed by Tim Phillips. Built by Vernon Powell and mentored by Wayne Parr from the Wooden Boat Shop, Sorrento.

Vernon undertook the build in 2003 at Smithton and, throughout the process he was mentored by Wayne Parr from the WBS. The end result was a beautiful 26 foot 6 inches Couta Boat which has taken Vernon and his family on some memorable journeys, sailing the waters of Tasmania.

The Build:
Vernon recalls the moment when his lifelong dream to build a boat crystallised in a winters evening phone call to a very generous Tim Phillips and the naïve question:

How do I start to build a boat?’ The advice was, get a keel and ring me in two years.

So Vernon sought the advice of Rob Keogh at Britton Bros. Timbers who supplied a beautiful keel. It sat in Vernon’s garden, propped up at each end so that it could cure with a sag, to get the spring in the keel. Every now and again he would lovingly paint it with wood milk and replace the corrugated iron cover, always imagining the boat it would become.

Two years passed. Then Wayne Parr came over and in two weeks he and Vernon set the keel, stem, sternpost and transom, set the stations, battens in place, ribbed and the garboard planks laid. Vernon recalls:

We did it in a time frame that the old guys used to achieve, and which Wayne had not managed commercially. If I’m honest, we did burn the candles at both ends.

Six months passed and, out of fear that he might waste the precious timber, Vernon finally began the planking. The building made steady progress, with regular updates to and occasional visits by Wayne to solve any problems that emerged. Vernon tells that on one particular occasion:

Wayne arrived on a Friday night, got out of the car and went straight to the boat shed. And not just for a look; work started then and there! The bow was too full at the waterline; it was falling out. Needless to say, by the next day the waterline was plumb straight and schmick-o!

Some of the old boat builders in Vernon’s local town were a source for constant advice and loaning of tools. Mac would come and sit in the sun and square the heads of the copper nails as part of his rehab post stroke, and tell tales whilst he kept an eye on Vernon’s work. Esteemed Tasmanian boat builder Errol Wilson regularly came to lend a hand, whilst Chris Medwin was on the dolly when the four thousand odd copper nails were clenched.

Like all good projects, Vernon had a deadline: the Australian Wooden Boat Festival (AWBF) in February 2009. And like all deadlines, he was looking very vulnerable. However, friends came together and My Girls was launched at the end of January 2009, ten days before the AWBF! Master Rigger, Anastasia Konstantinidis came up from Hobart and impressed Vernon with the skill with which she could make galvanised wire splice like spaghetti.

So, three blokes set off to sail from Stanley to Hobart. An open boat. Maiden voyage. Bass Strait. Another timeline. Mark Bishop and Barry McIndoe both knew boats, and Barry had some Sydney Hobarts under his belt. As we set off on a glorious summer afternoon with a brisk westerly behind us, we chewed up the miles. All was good (always is, downwind!) until the middle of the night when we were hit by 25 knots on the nose. The peak halyard jammed in the span slide block; it was pitch black and we were punching into the seaway. We were pretty wet, but the sail eventually came down and we motored into the night. The Yanmar didn’t miss a beat. By dawn, all was calm and we put into Devonport for breakfast, a dry out and to fix the pully on the span slide.

The next challenge was to get through Banks Strait at the top of the tide. I had heard horror stories of square waves and boats going backwards, so we had to get the timing right. We timed it perfectly; after motoring through a very quiet night we passed through Banks Strait at dawn. The breeze gradually built and by late morning we were passing Eddystone Point. As the NE sea breeze built to 20 to 25 knots, we became more confident in the boat’s ability. After all, she was built for this. As we surfed in front of the nor’easter, bow sprit just kissing the wave in front, the GPS told us we were doing 12.4 knots regularly, as we surfed along with the sea breeze swell. Who would have believed it; a gaff rig, long keel, doing speeds like that! The boat was level, stable and beautifully mannered as we sat back in the sunshine in our t-shirts. A sublime afternoon’s sailing.

‘Let’s head for Wineglass and drop the pick there.’ Sounded like a really good idea, but an hour short of our destination, the weather changed again and in the middle of the night, we had a big, wet sou’easter on the nose. Discretion was the better part of valour and we turned tail and scooted back to Bicheno, where we waited out the bad weather, tucked up in The Gulch. We were joined there by boatbuilders James Frecheville and Tim Heaney, who were motoring down to the AWBF in their newly built Toonalook clinker launch. They had motored the same seas that we had surfed the previous day!

We managed to have a gourmet Tasmanian lunch and a swim at the bottom end of Wineglass Bay, on an iconic blue Tasmanian summer day. This is what I had built My Girls for: here we were, in a boat I had built of Tasmanian timbers, sitting in one of the most iconic anchorages in Tasmania, with a couple of good mates, having sailed along the bottom of Bass Strait and down the East coast of Tassie. And on the maiden voyage to boot! From there, it was another great downwind sail past Ile de Phoques and its seals, through the Mercury Passage inside Maria Island and then navigating The Narrows (again we managed the right time of the tide for this notorious spot) and into Blackman Bay & Dunalley, for a quiet night. My Girls seemed to be in the groove. I couldn’t have been happier.

My Girls was named after my wife and three daughters. The next day saw said long-suffering wife, Sandra, and one of our daughters, Claire, join us for the trip through the Canal and out into Norfolk Bay and then into Storm Bay, and on to Hobart. We drifted across the glass of Norfolk Bay and sailed past some other yachts heading for the Festival. As we entered Storm Bay, we copped the full force of a Southerly Buster. But we knew the boat now, and with our new crew tucked under the side deck and out of the weather, we carried on, entering the Derwent as the breeze settled to a perfect 12 knots for our sail up the river. We were greeted for the last part of the journey by my good mate Charlie Peacock, in his classic Tasmanian built yacht ‘Serica’.

Three men, in an open boat, over 300 miles around two thirds of Tasmania: Safe, sound and intact. The Couta Boat was everything I ever wanted in a boat. I have raced with family and mates and had a blast. I’ve camp cruised, at times solo, in my comfortable minimalist dream boat, and My Girls has looked after me. She now sits on a mooring in the Derwent, and as I row away from her at the end of the day, I never fail to take one last look at the beauty, form and function that is the Queenscliff Couta Boat.’