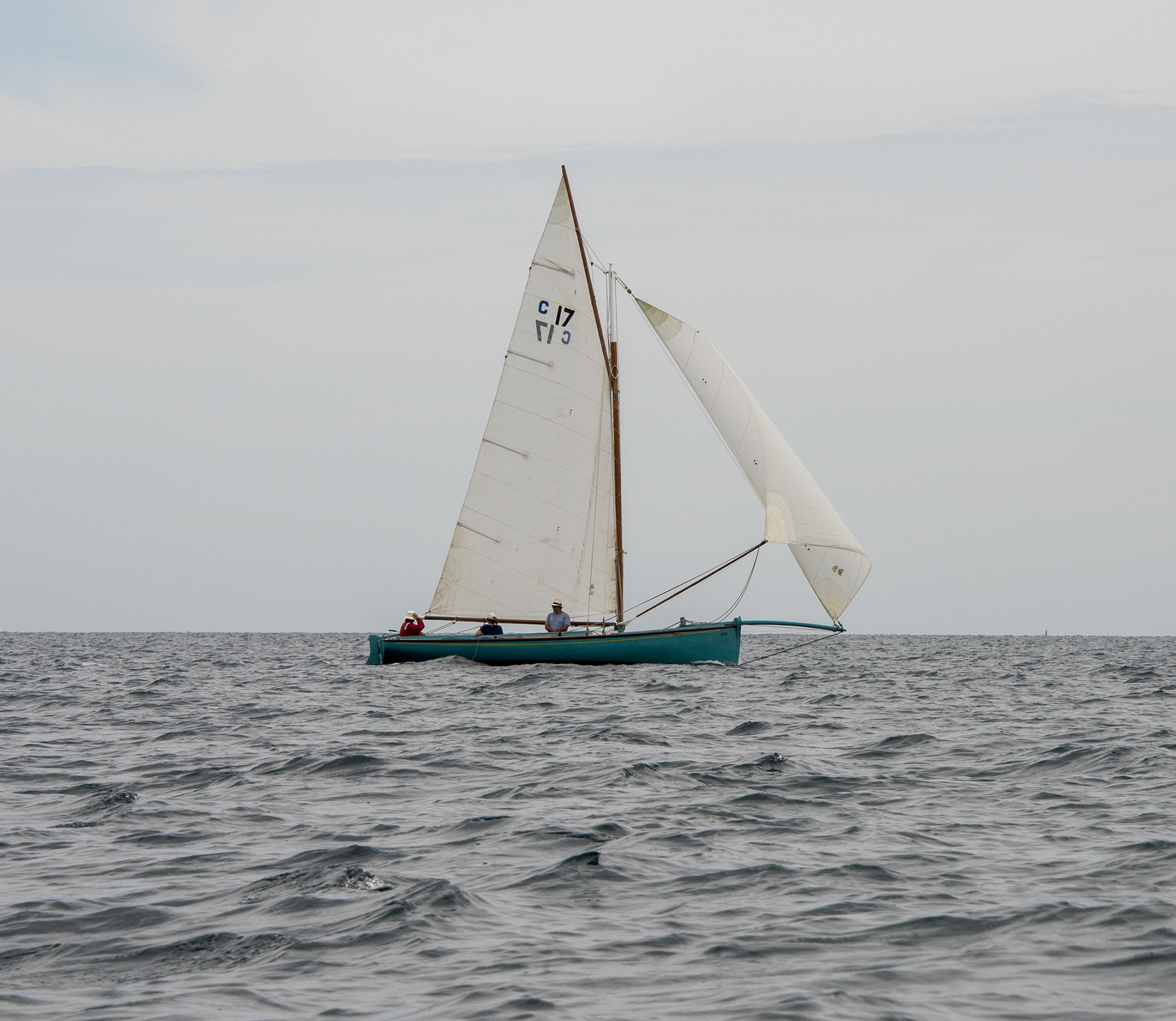 Right from the very first day I laid my eyes on Muriel I could see she was different, special, proud bow, beautiful stern. That was back in the mid 1970s, she was on the little slip at Flinders. Tim Phillips.

Custodian: Gus Johnson; 1917 – 1919
Muriel was built by renowned Couta Boat builder Mitch Lacco at Queenscliff in Victoria and launched on March 5th 1917 – the day Mitch Lacco’s son Harold was born. Built to the standard 26 foot for fisherman Gus Johnson, she was constructed as a special build with a bigger keel section, larger frames, double decking and full length planking of New Zealand Kauri. These structural additions made her relatively unique and durable as an open Couta Boat to fish in Bass Strait. She was originally named Ruby.

Gus Johnson owned her for less than two years, but in this time the boat made a number of Bass Strait crossings from Queenscliff to the north end of King Island where she was used for cray fishing. Tim Phillips tells that Gus opened up Christmas and New Year Islands which lie adjacent to King Island, as a viable cray fishing ground for supplying the Melbourne market, using Ruby as an inshore fishing boat. But sailing an open boat to King Island was not a long term proposition so after 18 months she was for sale.

Custodian: Andy Johansen; 1919 – 1985
In 1919, Ruby was sold to fisherman Andy Johansen. Andy had given Mitch a deposit of £50 for a new boat similar to Ruby. Andy had watched Mitch as he built Ruby and decided he would rather purchase her. Mitch Lacco handed the deposit on to Gus and the boat was sold for a total of £110. Johansen borrowed the rest of the money from his sister Muriel. Hence, she was renamed Muriel.

Andy Johansen’s pedigree as a fisherman came from his father Johan ‘Hans’ Johansen who settled in Flinders on Western Port in 1898. Tim Phillips, the current custodian of Muriel, continues the story.

Andy’s dad was a Couta man, who worked a flattie and lived at Flinders, but was drowned out of his boat towards Seal rocks on the western end of Phillip Island. Andy, who was 8 at the time, and his young sister were raised by their mother. Andy’s schooling was all about the cane, mostly for wagging. By age 12 his mother received a special government authority for Andy to leave school.

After a couple of years in a cheese factory (he never ate cheese again for the rest of his life) he went to sea, ‘couta-ing at Queenscliff in about 1907. Andy’s recollection is that he was about 15 or 16. Andy did his time with another fishing family, the Mannix’s. After four years he went out on his own and ended up fishing off the beach at Anglesea in a flattie, mostly cray fishing but doing some beach seining (fishing net) too.

By about 1916, he had saved up some money and then was the start of a life-long friendship with Mitchie Lacco, helping and learning a bit of boat building. Andy was in the shed the day Mitch laid the keel under the watchful eye of his ‘finicky’ Greek father-in-law. Ruby was her first name: she was built for Gus Johnston.

Andy told me soon after she was launched a group of them took for her for a test, sailing up the West Channel. Gus had the main pinned demonstrating what a safe boat she was, moments later they half- filled her. For rest of his life Andy never pinned the main.

Andy Johansen fished from the Muriel for about 60 years. It is estimated that in her working life Muriel sailed well in excess of 300, 000 miles. Andy’s first trip was to pick his own cray pots up from Anglesea, about 17 nautical miles from Queenscliff, where he had a fishing camp and used a flattie off the beach. Apparently, he left Queenscliff early one morning to collect all his gear but by the afternoon the sea was a flat calm so he and his mate rowed Muriel all the way back, meeting the fleet coming out the next morning. It is not well known that the fisherman rowed these boats, weighing up to four tonnes, such great distances when there was a need.

She was originally fitted with a Halladay motor of about 3 hp, but this was so unreliable Andy was in the habit of calling it a ‘Holiday’. There are many stories of Andy pushing (rowing) Muriel back from the fishing grounds, and he often fished as far away as Spit Point, working his pots and sailing home – a sail of 60 miles. She had quite a number of engines through her life, including a Ferro, about as reliable as the Halladay, and a number of Rugby car engines, which were then quite popular in the Couta Boats. In Andy’s time the engine was never used a lot; he preferred to pick up his cray pots under sail.

A mainsail lasted about 18 months. Over her working life time the Muriel is said to have worn out up to 30 mains.

After fishing from Queenscliff on Port Phillip for about 15 years, Andy took her further afield and eventually to Flinders at the entrance to Western Port from where he fished for several decades until his retirement. On formation of the Couta Boat Club in 1982 Andy was immediately made an Honorary Life Member. Several early members of the Couta Boat Club tried to purchase Muriel from Andy over a number of years – unsurprising given she is such a fine example of the craft, but without success, Andy and Muriel were not going to be parted easily.

Russell Barrett, the current custodian of Wattle, recalls fishing with Andy Johansen in the historic Muriel C17 back in the 1960s at Flinders.

She [Muriel] seemed such a big boat with steps from the cockpit to the deck. She had a Rugby engine which guided us from Flinders pier past West Head where Andy lined up two trees on the cliff to go through his secret passage. We would go to Cape Schanck, empty the cray pots and return to Flinders to put the crays in the coffs. Andy would helm Muriel or scull his beautiful clinker dinghy whilst rolling a cigarette in one hand and a swig of rum was the accompaniment. We were in the company of other wooden fishing boats including the Gardiner (Tom Delaney) and Barbara May (Max Mannix). There were other fishing boats, but to the best of my knowledge no other Couta Boats.

Custodian: John Dungar; 1983 – 1985
In 1983, Johansen gave Muriel to his nephew John Dungar and then two years later she was sold to Sorrento Couta Boat builder and enthusiast Tim Phillips.

Custodian: Tim Phillips; 1985 – current
Muriel, with the assistance of her old Rugby motor, was escorted from Flinders to Sorrento in March 1986 by Flinders cray fisherman Ross Wellman together with Rollo Moore’s 24 ft Alec Lacco boat – catching a few pike and a good number of ‘couta on the way. Fittingly another classic Couta Boat built by Mitch Lacco, Wattle was at the Port Phillip Heads to welcome the Muriel back – more than 50 years since she last navigated The Rip. In former years, Muriel and Wattle had battled out a few races held on a regular basis by the Queenscliff and San Remo fishing fraternity, to put to the ultimate test the skills of the skipper and his crew.

When Tim acquired Muriel, her hull, typically planked in full length New Zealand Kauri, was in good condition but there was still three month’s work to bring her back to original condition. The finished product was proudly displayed at the Melbourne International Boat show held in the Royal Exhibition Buildings in July 1986.

In the mid 1970s, Tim Phillips was instrumental in the revival of the traditional Queenscliff Couta Boat as a sailing boat. By the mid 1980s, Tim and his friend Marcus Burke were conducting regular races off Portsea Pier and in this time Tim had restored a number of Couta Boats including Helen, Amanda and Lucy for this purpose. He then embarked on building his first Couta Boat that was named Sally. Three years later he acquired Muriel.

Muriel became an integral part of the early Couta Boat fleet, competing in the regular races and Regattas out of Portsea and those conducted at the northern end of Port Phillip throughout the 1980s and 1990s. In 1999, she won 1st Handicap in the prestigious Portsea Cup. Almost 20 years later, in 2017, she won 1st Handicap in the Portsea Cup again. This was a significant and symbolic win as it was in the centenary year of Muriel’s build and demonstrated to all the longevity and speed of an original boat built for fishing under sail.

In addition, Tim and his family used Muriel extensively for cruising trips, with numerous journeys beyond Port Phillip Heads. These included to Western Port and as far as Apollo Bay on the south-west coast of Victoria. In the 1988 Bi-centenary year, Muriel was transported to Sydney to compete in the various regattas held on Sydney Harbour to mark the occasion. She returned in 1997 to compete in the Sydney Amateur Sailing Club 125th Anniversary Gaffers Regatta and yet again in more recent years she has competed in the Couta Boat Australian National Titles on Sydney Harbour and on the Pittwater, NSW.

In 2013, Muriel and Tim were featured in the local Melbourne news. Tim came to the rescue of three fishermen whose boat had upturned in rough seas, as he was returning Muriel from Sandringham Yacht Club to Sorrento. Muriel proved her reliability and Tim proved his expert seamanship.

Sailing solo, Tim first tried to approach them under sail. He hove to alongside but quickly realised it wasn’t going to be an easy rescue. Only one of the three lifejackets on board inflated and one of the men was huge – about 150kg. Tim was forced to start the motor to hold Muriel steady into the howling winds which had postponed racing on the final day of the ISAF Sailing World Cup at Sail Melbourne.

Today, at over 100 years old, Muriel remains in top condition, possibly the finest example of Mitch Lacco’s work and displaying the quintessential elements of the Queenscliff type Couta Boat of the early 1900s. She is also listed in the ‘Australian Register of Historic Vessels’ on the Australian National Maritime Museum website.