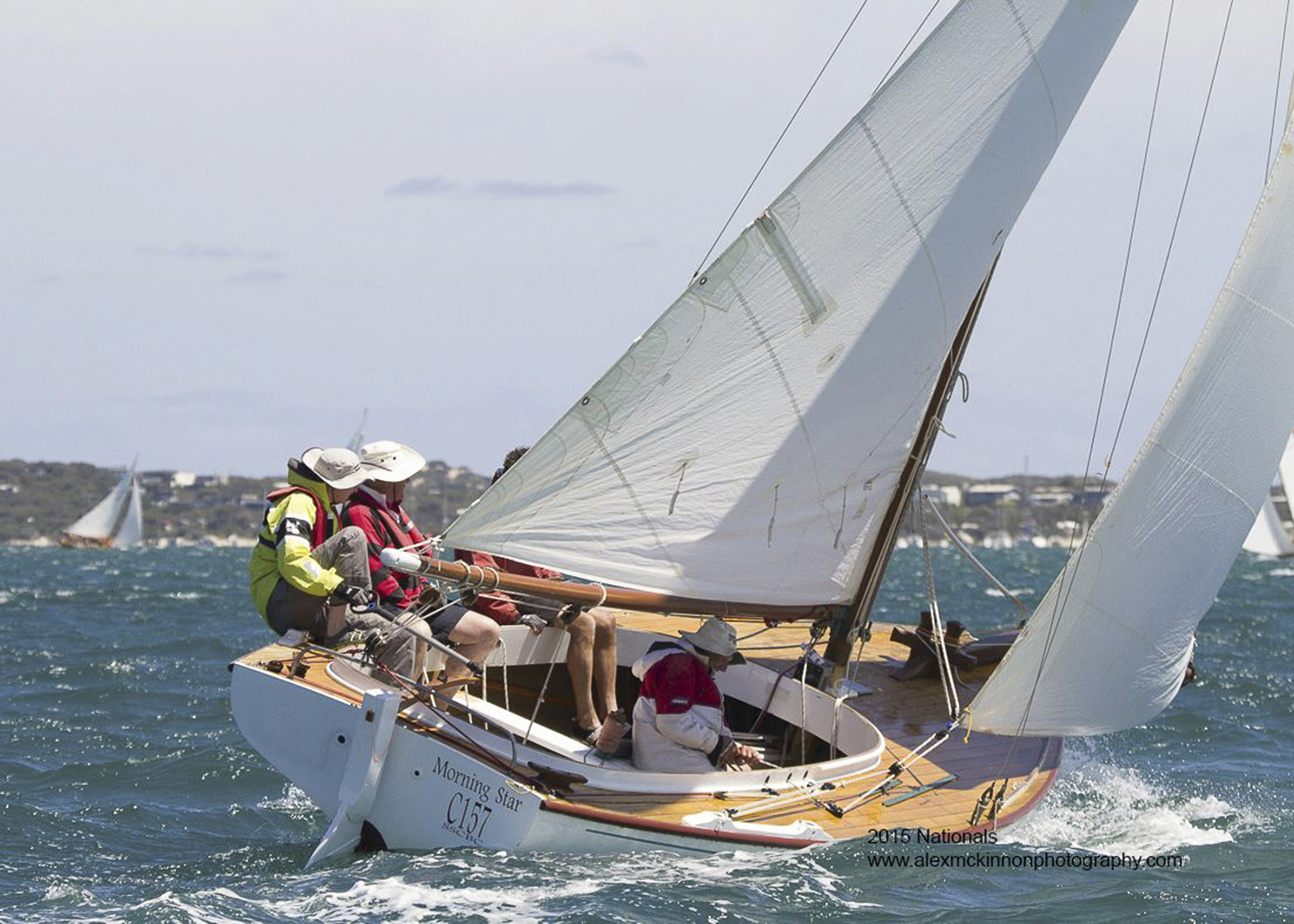 Early Years
Morning Star C157  was built by Queenscliff boatbuilder Peter Locke in 1935 for the Bertotto family in Sandringham, Victoria.

The Bertotto family was a well-established family in Sandringham, Melbourne. Angelo Bertotto settled with his family in the 1870s, in a fisherman’s cottage located where the Trey Bit Reserve off Jetty Road is today. His sons Bill and Joe followed in the family tradition, becoming fishermen out of Sandringham. Bill and Joe fished out of Morning Star and another Couta Boat Alena. Both boats were distinctively recognised by their green hulls and cream decks.

Custodian: The Bertotto Family; 1935 – Early 1950s
Morning Star was launched on the 7th September, 1935 and was registered as a snapper and long line fishing boat operated by the Bertotto family out of Sandringham, Victoria. Tim Phillips has the original letter from Peter Locke.

A 24 foot Couta boat was launched for a Mr Bertotto on the 7th September 1935.

A long-term Sandringham identity, Peter McCarthy recalls that as a young boy in the 1940s, he often saw brothers Joe and Bill Bertotto leaving the harbour to fish. Morning Star was moored away from the pier and was reached by rowing a large clinker dinghy that was roped to the pier.

Joe would use the small motor on Morning Star to exit the harbour, chugging past the ex-British submarine that had been scuttled to act as a breakwater (no protective rock wall was in place back then) and then raising the sail if the wind was good to head out to his fishing grounds.

Mick Balzary, who fished and sailed out of Sandringham in his youth during the 1940s and 1950s, recalls frequently sighting Morning Star on the water and being sailed single-handed by old Joe Bertotto, trolling around the Anonyma Reef for pike, about one mile off shore. Joe’s grandson Dennis Bertotto also adds that Joe and Bill often would seek fishing grounds as far as Port Arlington and St Leonards on the south west shores of Port Phillip. The catch generally was whiting, snapper, cod and the occasional barracouta. These trips could take up to three days and would entail working and sleeping on the open boat, without cover.

It was a lot of money in those days, but she was in beautiful condition… she was a magnificent sail.

Davey used Morning Star as a fishing vessel for scale fishing. And when in challenging seas he was always confident in knowing that she had solid rigging and good ballast. Davey added a further two planks to her hull so she could carry a bigger catch. When she was not in the water Morning Star rested at The Docks opposite Erlandsen Avenue, Sorrento.

In 1956, Davey Dawes made headlines when he hunted and shot a 10 foot pointer shark that had attacked and killed a young lifesaver. Morning Star is featured in news articles as the ‘hunting boat’, with Davey and his mates Tally Erlandsèn, Ron Campbell, Des Lever and Gordon Leonard onboard and equipped with a shotgun to kill the shark. The tragedy occurred off the Sorrento back beach at the annual lifesaving championships conducted by the Portsea – Sorrento Surf Life Saving Club.

The shark was circling around and around. We hailed like mad to get it near the boat, then I gave it two blasts from a shotgun and followed that up with five shots from a pea rifle. That did it. I put three extra hooks in the shark’s mouth and we put a rope around its tail, then towed it in. We towed it for nine miles from the Portsea back beach, through The Heads, to the Sorrento Pier, in very choppy seas. We are thankful to Mr. Lewis Ferrier of Queenscliff, who lent us some of his gear to catch the shark. This is the second man-eater I’ve caught. I got an 8 ft. tiger shark off Sorrento about seven years ago. (The Argus 8/3/1956 p1. ‘Killer Shark Shot.’ Trove).

Custodian: Bert Harrison; 1960s
Despite her prominence among the fishing fraternity, Morning Star did not stay at the southern end of Port Phillip for longer than about five years. In the late 1950s she was used as a fishing vessel on Western Port; she fished out of  Rhyll  in the early 1960s. In this period Morning Star was owned by Bert Harrison from Melbourne. She was the first boat to use the new Rhyll slipway that was built in the mid 1960s.

Custodian: Bill Bleakley; Late 1960s – Unknown
In the late 1960s, Morning Star was sold to Bill Bleakley who hailed from Moe in the Gippsland region of Victoria. Well known amateur boatbuilder John Jansson who knew Morning Star when she was at Rhyll on Western Port and used as a recreational boat, recalls rescuing her when she was floating down the Rhyll Channel in a south-west gale. Another Couta boat, Victory, came to her rescue and towed her back to Rhyll. John observed that during this period Morning Star spent a season or two on the slip and declared:

The Kauri must have been good as she never opened up whilst on the slip.

Custodian: Tim Phillips; 1984 – 2006
Custodian: Liz Jensen; 1989 -1991
Some 20 years later, Tim Phillips from the Wooden Boat Shop in Sorrento first became aware of Morning Star where he sighted her in about 1984 at Rhyll. He learned that her owner, who was working on the boat, was killed in a motorbike accident while travelling to buy some copper nails. Consequently, the boat was left in a state of disrepair until Tim purchased her.

Tim did not know Morning Star’s early history, so he named her Woolamai after Cape Woolamai on the south-eastern tip of Phillip Island. He brought the boat back to Sorrento where she  stayed at the Wooden Boat Shop for many years. Initially Tim gave her to a friend, Murdoch Clarke, but the boat remained in a state of disrepair.

After Murdoch gave the boat back to Tim, she was sold to Liz Jenson and her husband in 1989 who owned her for about two years. In 1991, the boat returned to Tim Phillips who then restored her.

Morning Star was then restored by Tim Phillips. She was replanked and given a new transom;  the end result being a beautiful restoration. Incidentally, today, Tim has the old transom proudly displayed in his home. Tim declares that because Morning Star was a late restoration, she had all the benefit of the many years of experience of the boat builders at the Wooden Boat Shop.

Custodian: Robert Brown; 2006 – 2011
Morning Star then was sold to Robert Brown in 2006. Robert was sailing Lavina, but he was looking for a larger, high performing boat. A deal was organised to trade Lavina for Morning Star.

Custodian: Rob Tucker; 2011 – Present
In 2011, Morning Star was sold to well known member of the Sorrento Sailing Couta Boat Club, (SSCBC) Rob Tucker. Rob had helmed Joan  on behalf of her owners for about four years before he purchased Morning Star. He says that the purchase was driven by sentiment as he was an acquaintance of Davey Dawes.

After the purchase, Rob continued to helm Joan and occasionally raced Morning Star including a win in the 2012 Portsea Cup. Unable to sail both boats, he assigned his son Rhys in late 2013 as the regular helmsman of Morning Star and in an unusual arrangement they worked in conjunction with the owners of Joan to keep both boats actively sailing.

They formed a group of about 12 to 14 experienced crew that continue to be available to sail throughout the season. Rob and Rhys maintain a friendly rivalry on the water. When the opportunity presents itself, Rob occasionally steers Morning Star, much to his delight. Hence, with a reliable crew, Morning Star has won a string of titles since 2013.

In addition to sailing out of the SSCBC, Rob and his crew have sailed Morning Star on various journeys to the northern end of Port Phillip, to participate in regattas, namely: the Classic Yacht Regatta out of Royal Victorian Yacht Club at Williamstown, the ISAF Regatta at Sandringham Yacht Club and Royal Melbourne Yacht Club, the Wooden Boat Festival at Geelong and over to the Queenscliff Lonsdale Yacht Club for the annual Couta Boat Regatta.

Rob says that on these journeys he never ceases to be amazed, that, whatever the varying weather conditions might be, Morning Star is able to plough through the water so effortlessly to deliver her crew to their destination. He is in awe of the skills of the early Couta Boat boatbuilders who crafted their vessels with such proficiency and that these same vessels are still successfully sailed today.

If  I could turn back the clock, I would love to have a conversation with Peter Locke in his boatshed in Queenscliff, Victoria to pay tribute to his skills and to let him know that Morning Star is still as durable and reliable as when she fished the waters of Port Phillip and beyond Port Phillip Heads over 85 years ago. Vale Peter.