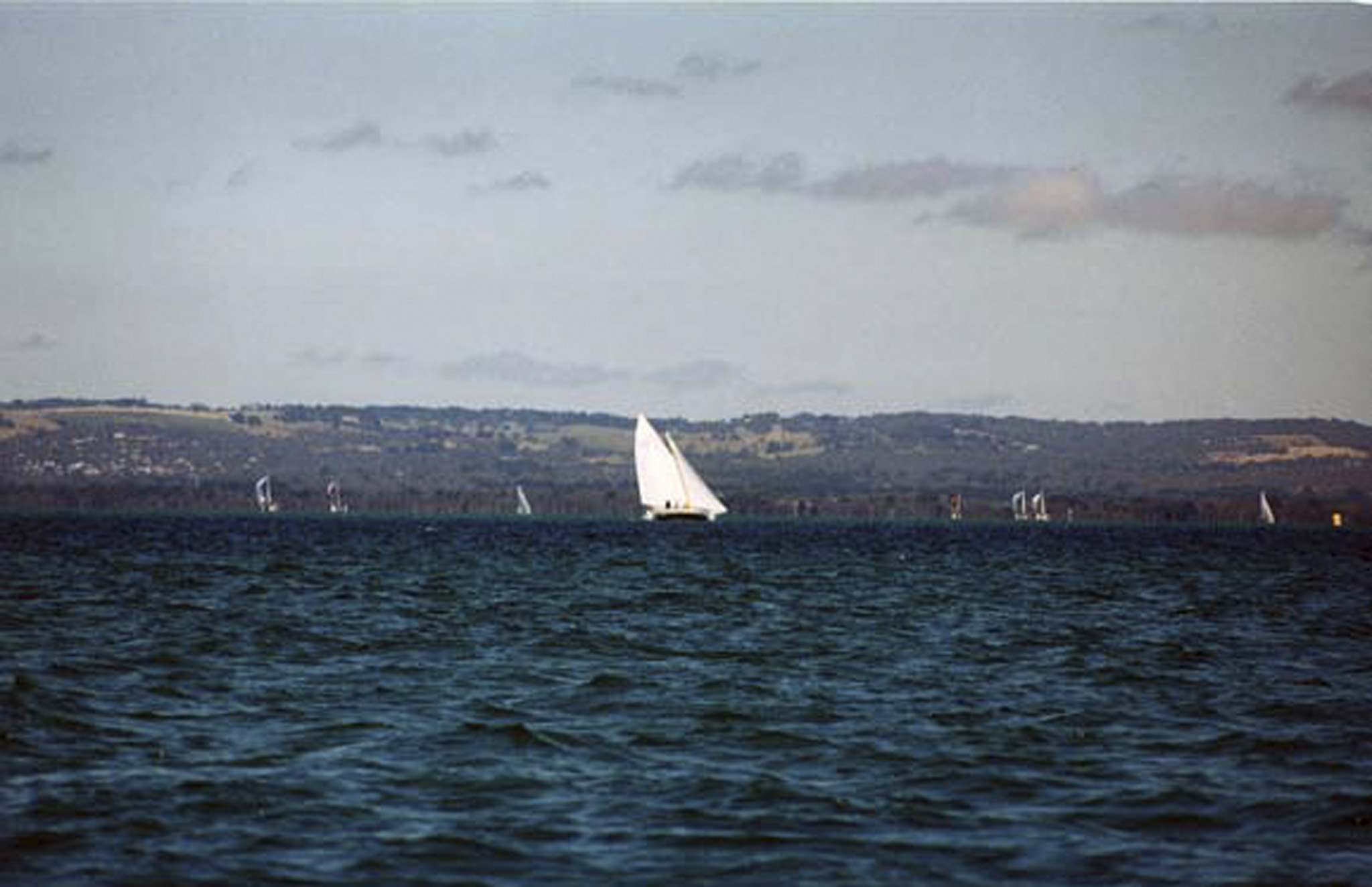 Designed by Gil Allbutt. Built by Phil Myer at his farm in Drysdale, Victoria.

Custodian: Philip Myer; 1989 – 2006
Meryln was built in 1989 by Phil Myer at his farm in Drysdale, Victoria. Built to Survey Standards as a cruising Couta Boat she is 32 foot in length. Gil Allbutt drew up the plans based on a motor boat design. These were then adapted by Phil, with advice from Tim Phillips. She was named after Phil’s grandmother.

In her early years Meryln operated as a charter vessel doing trips for patrons of the Queenscliff Hotel. She was then taken under sail to the Gippsland Lakes and was used by Phil during his regular trips to the Lakes region.

In the time that Phil was her custodian, he sailed her down to Tasmania on a few occasions. When he eventually settled permanently in southern Tasmania in the late 1990s, he returned with Meryln and used her for pleasure cruising, as well as operating her as a charter boat in the southern Tasmanian waters. Phil owned Meryln for 10 or so years, until he sold her to a local from Cygnet, Tasmania.

The name of Meryln’s next owner is not known, nor the location of the boat in the intervening years before Brian Walpole purchased her.

Eggshell blue, beautifully varnished, and was awarded Best Boat of the Festival for larger sailing cruisers.

At some time after the festival Meryln was offered for sale but it was not an opportune time for Brian to make the purchase.

Four years later Brian and his wife began a search for a cruising vessel and came across Meryln penned at Kettering, a coastal town south of Hobart, but by then she had lost her pristine condition. On enquires he discovered that the boat had not moved for over two years, as the owner was unwell and maintenance had ceased.

On close inspection, Brian observed that the boat was badly in need of maintenance. A large amount of the ply wood in the cockpit had rotted and had spread to the Celery Top as well, the smell of mould pervaded and green slime adorned many of the wooden angles. Nevertheless, he had her surveyed and valued, and an offer made which was accepted immediately.

Meryln then underwent an extensive refurbishment: the whole aft end was dissembled, rot removed, panels replaced, mast removed, sanded and painted, ventilation flues installed as well as a set of navigation instruments. She was restored to the standard of a beautiful sea boat, with 2 tons of lead under the floor, a 400 kg iron centre-board, 12 feet of beam for stability, 7 feet of bowsprit to intimidate opposition, and frighten when entering marinas! The 34 hp Yanmar 3 is just right, pushed her at 7 knots, and the Couta Boat design makes for comfy sailing on all points.

During the next 12 years, Brian and his wife Liz cruised on Meryln in the D’Entrecasteaux Channel and took part in four biennial Tawe nunnugah (The Raid) from Recherche Bay to Hobart, prior to the Wooden Boat Festival. In one segment of the journey Merlyn had 14 people onboard. Such journeys were sometimes precarious, as the lead ingots sitting in the bilge were not secured.

They also cruised further afield: to Port Davey twice and, over a late summer, to the Furneaux group. In addition, Meryln competed in the Wooden Boat rally in Kettering.

On the 25th April, 2017, Brian and his wife set out for the Derwent River with a clear reach to the Tamar River in northern Tasmania, and in a warm north-easterly. However, on their arrival in Georgetown, the forecast was grim; nevertheless they set off for Swan Island before dawn, and arrived just ahead of a nor’westerly gale.

With the wind abating next morning we swooped through Banks Strait on the tide, dropping the pick in the lee of St Helens Island, only to hear a storm approaching from the west. We beetled in to St Helens with the plate up to clear the bar and rested at the new marina for four days, until the weather cleared to a gentle north-easterly, which blew us all the way to Marion Narrows, where, plate up again, we motored to Dunalley for the night, and 40 miles home next day.

In 2018, they  sailed Meryln to the biennial Geelong Wooden Boat Festival via Flinders Island, taking three weeks to complete the journey. They cruised up the east coast of Tasmania then cruised around Flinders and Deal Islands; spent a few days in Westernport; then to Queenscliff at Port Phillip Heads. For the final leg of their journey they joined the local Couta Boats and an array of historic classic yachts to sail in one of the festival events: the Portarlington to Geelong Passage Race. Overall, the journey to and from Geelong took three weeks, including stopping at Sorrento for a service at the Wooden Boat Shop.

And yet another epic voyage was undertaken in Meryln.

In 2019, Brian and Liz  sailed the southern coastline of Tasmania around to the secluded Port Davey in south-west Tasmania. In their good fortune the wind blew a magical 10 to 15 knots, but on the return journey it was a boisterous 25 to 30 knot strength. With one reef in the mainsail and the jib furled, they enjoyed a vigorous sail travelling at 8 knots, surfing down the waves. Their 5 am departure from Port Davey to their arrival in Recherche Bay took just 8 hours; and Meryln was back in her pen in Royal Yacht Club of Tasmania that evening.

After many years of wonderful voyages, maintenance issues became paramount. Over the next six months the stern gland blew, the deadwood there was rotten and the impeller shattered, spewing rubber all through the engine cooling chambers. When all that was fixed, Brian decided it was time to sell.

Custodian: Kevin Robson; 2020 – Present
In early 2020 Meryln was sold to Kevin Robson of Franklin, Tasmania. Kevin first came to know Meryln when she started to accompany the Tawe Nunnugah raids. His impression was that she was a lovely addition to the fleet and never dreamt that he might one day own her.

Some six or so years later, having decided they wanted to undertake some cruising, Kevin and his wife became the new custodians. Since then they have done some regular cruising in the D’Entrecasteaux Channel, with a few visits to Bruny Island.

Having been an admirer of working craft and Couta Boats for many years, Kevin says that Meryln is a welcome replacement for his 18 tonne retired jarrah crayboat. He describes Meryln as being well-balanced and an easy boat to sail, and plans to use her regularly. Slowly, improvements are being made to ensure a comfortable cruise. Recently, a small Newport wood stove was installed, in preparation for winter sailing in Tasmania.

Meryln is now moored on the Huon River in front of the Wooden Boat Trust Centre in Franklin in southern Tasmania.